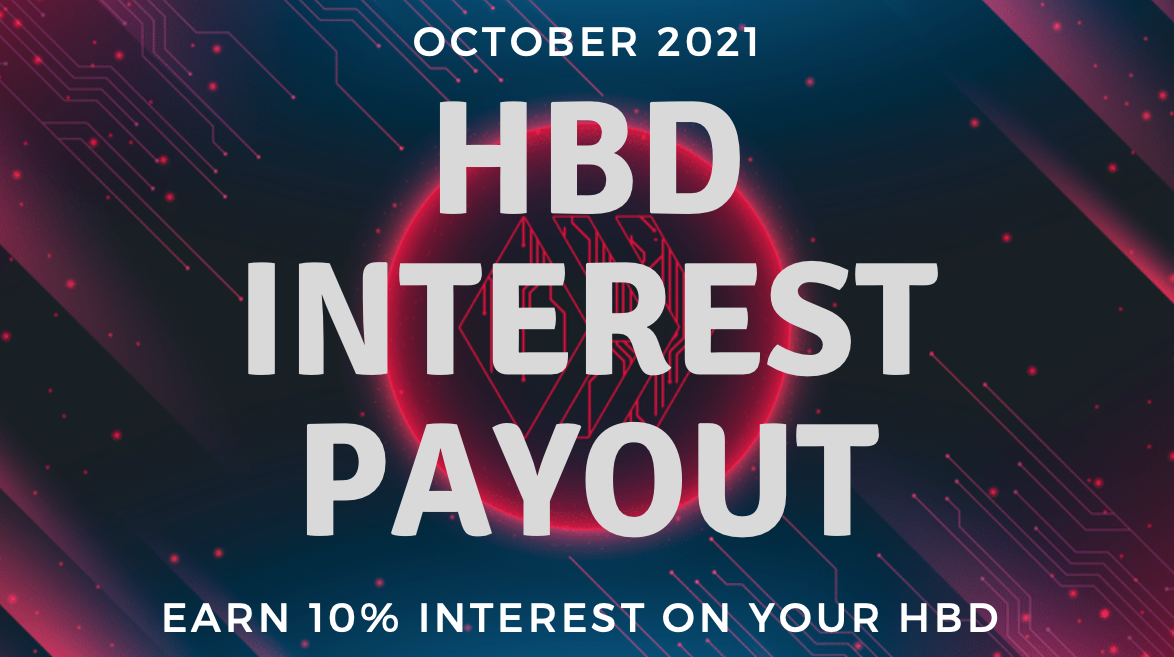 Hive blockchain is still paying out 10% APR for Hive Dollars (HBD) in the savings. It is time to see what has changed in regards to accounts using HBD savings to accrue some interest payouts.

In October total amount of interest payouts was 4,914 HBD to 1239 accounts. This is an increase both in the HBD paid out and the number accounts taking advantage of this feature. Below is the number for the previous months starting from March to September, 2021.

Here is the total payment numbers in the previous months.

The increase in the HBD interest payouts and the number accounts receiving payouts shows there is demand for HBD 10% APR. It also important to remind that in the first few months since APR payments started, main beneficiaries of these payments were exchanges since they hold large amounts of liquid HBD on behalf of their users. After the latest hardfork only HBD in savings can accrue interest.

Another change that is being discussed and worked on is to increase the HBD printing haircut ratio cap to 20%. Currently, this debt to Hive ratio is 10%, meaning whenever total worth of HBD in circulation reaches the 10% value of total Hive, blockchain stops printing HBD. Also, as this ratio approaches closer to 10% less HBD is printed. Blocktrades explained this in more details in the software work update post from two weeks ago. Feel free to visit the post for details and see the discussion on this topic.

Code to set new HBD haircut ratio and soft limit completed and tested
We completed the code and tests associated with changing the hard and soft limits for HBD supply, so I’ll start collecting final feedback soon on where we should set the new limits for HF26.

We’ve tentatively set the new hard limit to when HBD supply reaches 30% of the virtual supply of Hive (in the current hardfork it is set at 10%).

And we’ve set the both the soft range limit (the starting and ending point where post rewards begin to change from HBD to liquid Hive) at 20%. In other words, post rewards would immediately switch from paying HBD to paying only liquid Hive at 20% instead of gradually shifting between the two currencies as the debt ratio increases.
source

What are you thoughts on HBD interest payouts. Is 10% good APR? Too high or too low? Let me know in the comments.

Well in any asset class, a 10% return will be greatly appreciated. The people taking advantage of this are very shrewd indeed

Holy smokes, first of all, I thought a lot more people would use it. My second thought was "who the hell is alpha" and the third one if the rewards are already accessible for custodial usage via exchanges.

Is 10% too high? Not for now and surely not for a Bull Market.

I think 10% is fine as it is right now. While it isn't the best possible option out there, I still think it's attractive enough and HBD would still be up towards the top.

This is really awesome @geekgirl

HBD savings will make more sense during the bear market

I think you have an error where it says September in the title of your table instead of October.

You are right. Thank you for catching that. Fixed it.

I think HIVE hit $1.57 in October. I have saved my HBD in savings for a few month. It is not a much interest payout, but no effort to get some HBD.

lol @grot & @punt sold it all haha! yea man, i hope hive drops back to .30 cents too so i can buy a shitload more! @shikoku is 100% all in on HBD haha! @parkman 0hp manz needz delegation!
@paleking is 100% bullish on HBD too! I gave that dude a lil delegation too haha

Investing on the HBD is a great idea....@geekgirl thank you for sharing this wonderful stats

What are you thoughts on HBD interest payouts. Is 10% good APR? Too high or too low? Let me know in the comments.

I'm not a blockchain economics expert, but I do know my finances a little bit. I believe this is positive, and I would like to see this % grow a little bit more just to see the elasticity of the feature. By saving SBD you are betting that the Hive price won't pump higher than 10%, which is fairly possible as we've seen pumps above that in the past months, and with any cryptocurrency with this market cap it is quite easy to pump. If you believe a bear market is coming, you stash SBD, if you believe the bulls are coming, you stash liquid Hive.

After all, it is just another way of gambling by predicting something will happen with the hive and overall market, but isn't that just most of what happens in crypto? I believe this will happen so I do this. But in the end, aren't we all just playing fools? Cause nobody knows what the market holds, and the market will do what the market wants to do :P

Either way, I think 10% is a good amount, I definitely wouldn't lower it, perhaps even rise it a little bit.