Splinterlands:: License Reward Claim - How much $SPS & $VOUCHER - I get via License Node? Finally, I got to claim my rewards for HOLDing a License node. Earlier, we used to get only VOUCHER tokens that used to credited every 24 hours. But now we also get $SPS which is the governance token of the game Splinterlands and that too in the staked form. Which means when you claim your License rewards - $SPS is staked and $VOUCHER is immediately available either you can enter any $VOUCHER pool or use it for buying packs, swap with with other tokens etc.

So how many License Nodes do I HOLD? Not many just 1 as seen from the following image. I was a bit unfortunate not able to buy during the first round i.e. the PRESALE round. Not regretting it that much and was lucky to buy in the License Node in Tranche 1 round. Right now, we are into the Tranche 2 round where currently there are 4997 nodes up for sale. And buying a node without $VOUCHER will cost you somewhere around $5K.

There will be 60,000 licenses available in total, and as each phase sells out, the next phase licenses will be available at the increased price point. 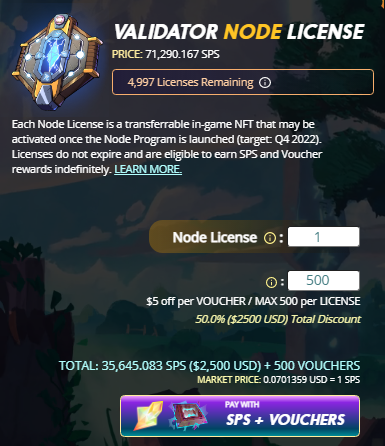 But whereas if you have $VOUCHER tokens you can a get 50% discount and the price of the node will cut down to half that is $2.5K plus the $VOUCHER token price incase you don't have them in your wallet. In my case, I been accumulating most of $VOUCHER tokens that I was getting for $SPS staked. So this put me in a good position to buy immediately, when the Tranche 1 round was open. At that point in time, the $SPS - VALIDATOR NODE LICENSE overall costed me $1.5K. Not considering the $VOUCHER price coz. all the 500 $VOUCHER tokens that I leverages was due to my $SPS staking rewards. Let me be more honest here, also the $SPS that I invested in buying the License Node came via the $SPS staking rewards. :-) 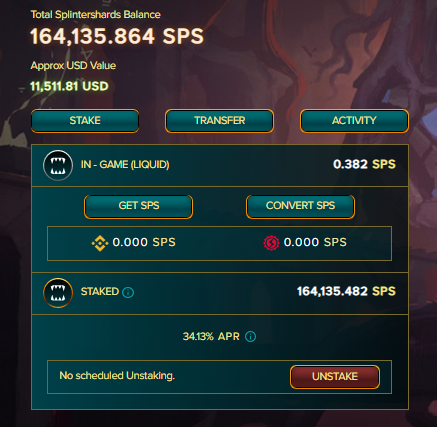 But not saying that I didn't invest in anything and was able to buy the License Node all for FREE.I had been accumulating $SPS and staking them all. There were opportunities, where I had bought $SPS in bulk and then again staked them all. Here is the current status of my staked $SPS; growing slowly and steadily - targeting 200K+ $SPS staked. At current, pace and the $SPS rewards that I am getting via all the sources - I am staking 100+ $SPS daily; that like $7+ being invested into $SPS daily; considering the current price of $SPS which is $0.07+ cents. 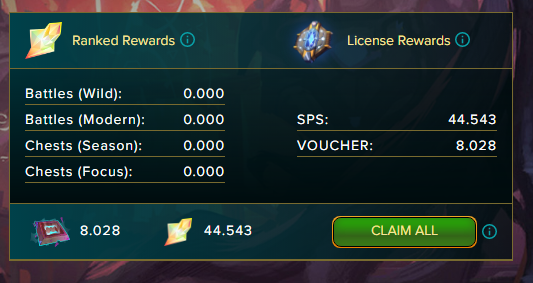 Lets now look into my daily License Reward The above picture demonstrates two days of rewards in the form of $SPS and $VOUCHER. Divided by two this would be like 22+ $SPS and 4+ $VOUCHER daily.

Therefore at current price of $SPS & $VOUCHER, I am making close to $3.5+ daily with 1 License Node rounding it up it will be close to $4 being made daily.. Not that bad isn't it? I am over happy with the investment that I made in buying the License Node and the rewards that I am getting daily. The plan is to compound the earning and redirect into the different $SPS and $VOUCHER pools. Currently, I have provided LP in $SPS - $BNB and $SWAP.HIVE - $VOUCHER pools. 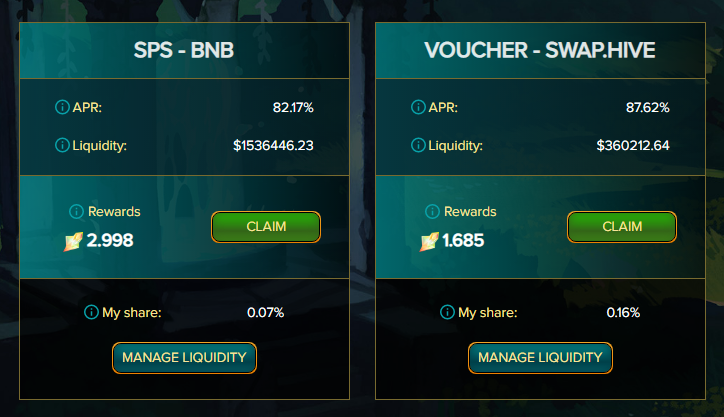 Both the pools are giving APR of above 80%, which is pretty decent. I am approximately getting close to 150 $SPS as LP rewards. These rewards further gets added to the main individual $SPS staking pool; where the APR is above 34% as of writing this article. This almost concludes my article for today, and in a nutshell $4+ is the income that am receiving daily for owning 1 VALIDATOR NODE LICENSE. Right now I don't have plans to buy any other node and will be looking about to buying in some Tower Defense or maybe even Riftwatchers pack. Just waiting up my rental income in the form of DEC to accumulate to a point where I can at least target 100 packs or so to get some bonus packs. :-)

License is very profitable, making 4$ a day is not bad. That will be over 100% in a years. Great investment

Yes, that's the hope. Its looking profitable at the moment and am enjoying the $4 reward daily. cheers

That's great buddy! While I was always curious about passive income from HIVE blockchain. Although, there are several ways available atm in HIVE such HBD, HP, Splinterlands assets and so on. I wanted something more vigilant and concrete. Which is why I dived in myself in purchasing Validator Node licenses. I was always thinking about what it could do to me in the coming days? While just imagine, SPS is the governance token of Splinterlands. And there will be a time where SPS will see a great price correction happening. Which is why now we are getting 22 SPS per node and if the price of SPS reaches $1 (which it will) we are going to get a huge amount compared to this purchase.

I am eagerly waiting for that day. The people who purchased Node's are going to get royalty income as long as Splinterlands exist. I am glad to be a part of it. This feeling came from GALA node. I know someone who own 2 Gala nodes. He is giving me chills with his incomes and all the rewards coming from those two. Within couple of years I am going to get the exact feeling what he is getting atm jk lol Kind of excited just thinking about it!

thanks buddy.. You are right, there are many folks who I know have more than even 5 nodes. I am just a minnow and trying to be consistent with my investment. The plan is to stake as many SPS, I can and in long run take the advantage. Wish you good luck too. cheers

You have a good set of investments lined up. I wasn’t in a good financial state to obtain license and the price keeps moving up. Hopefully another opportunity will come where I will be able to excel and obtain some rare nuggets in the game . I obtained a whitelist position for the runi sale which I’m so proud of

thank buddy, I am just trying to follow a diversified investment pattern here. Love for $SPS is always and hence its my first preference over any other token. Wishing you all the best with your RUNI purchase.

awesome post on Node licence! the rewards are indeed lucrative.