It is no secret that Splinterlands is gaining attention outside the Hive ecosystem. New players and investors from other blockchains flocking in who did not follow the massive development roadmap and changes for the past three years may be overwhelmed by the different possibilities and kinds of assets that exist in the Splinterverse.

As more and more people are asking questions like ‘What’s the difference between DEC and SPS?’ in Discord, I wanted to create an overview of the different types of assets and explain how they are working together. The core of the game are collectible trading cards, so before looking at tokens and other assets, I am creating this post, to give you an overview over the different card editions and when they were released.

Splinterlands is a collectible card game and cards were the first asset type available for purchase even before there was a playable game to them. As these were distributed in the alpha development stage of the game, the first card edition is called ‘Alpha’ edition.

Alpha edition packs originally cost $2 USD and like all other packs they contain 5 cards with one card of ‘rare’ or higher rarity guaranteed. Like all other packs up to Untamed and Dice they have sold out in the official store and can now only be purchased on secondary markets from other players who still own sealed packs.

Alpha cards have the highest burn value. This means you can ‘destroy’ a card in your possession by burning it and will receive a set amount (the burn value) of DEC for doing so. Burn value also equals collection power. So, having Alpha cards in your collection makes it easier to achieve a higher level of collection power and progress through the leagues.

When the game became playable and Alpha cards had been sold out, the Splinterlands team released the Beta edition.

Beta cards were a copy of Alpha cards with a higher number of packs sold (for $2 each) and consequently lower (but still considerable) burn value/collection power per card. An exciting addition made to the Beta edition were the first (non-dragon) legendary summoners that did not exist in the Alpha edition.

With the statement from the Splinterlands team that cards are not going to be reprinted, Alpha and Beta should be the only editions containing identical monsters while other editions will always bring new cards and keep the older editions unique.

Along Beta packs, a new sort of special card packs was introduced. This special edition contained a smaller collection of cards that were meant to enhance gameplay and provide a DEC sink. A DEC sink is an application that burns DEC and thus provides additional utility to the token. Essence Orbs could only be purchased for 2,500 DEC each. Fiat payments or payments with other cryptos were not possible.

What I never understood was why the Orb cards were considered promo cards, especially since the later Dice cards were granted their own edition.

This makes it a bit complicated to keep them apart from actual promo cards that were handed out during events or as bonuses during sales events.

After cards were introduced with Alpha and gameplay had been proven with Beta, Untamed was the first edition that sounded like a full release. Untamed packs, like the previous packs, were available for purchase at $2 each.

As the amount of Untamed packs was significantly higher than the Beta supply, burn value/collection power have been greatly decreased for these cards. 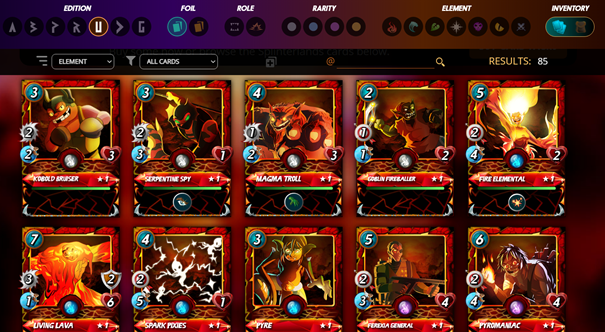 Untamed was the first full new set of monsters and summoners, in that it was playable standalone without necessarily owning any of the previous cards. Of course, having those would give you greater choices in deck building and thus an advantage on the battlefield.

After Essence Orbs sold out, the Untamed edition got their own special edition called Azmare Dice.

Dice were purchasable for 3,000 DEC each. Like with Orbs, other currencies could not be used and all proceeds were immediately burned. 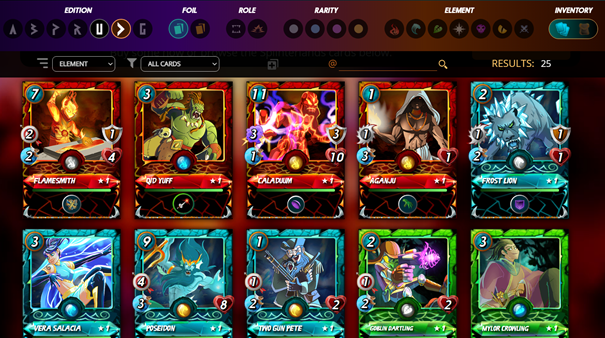 What makes the Dice edition special is that the only ‘rare’ cards contained in this set were all summoners. With a ‘rare’ or better card guaranteed per pack, this means you will either get a guaranteed summoner per pack opening, or otherwise an Epic or Legendary monster in its stead.

All of the above editions sold out months ago. Since then the only way to acquire cards is by buying them from other players or renting them from the rental market.

Due to the recent 10x in DEC value and player amount, the total pack supply was again raised to now 15 million and burn value/collection power of cards was decreased again along with that change.

Not much is known about Chaos Legion except that the pre-sale will start October 18th and will be going on for a full month. In order to purchase packs during the pre-sale, which will sell for $4 each, you need to hand in one Voucher token per pack purchased. Vouchers will be airdropped over the course of the pre-sale to stakers of the SPS token.

Packs cannot be opened until (an unknown time) after the pre-sale when the full edition becomes playable.

Azmare Dice will be replaced by a new mini-series called Rift Watchers (no artwork on the site yet). Like Dice and Orbs before them, Rift Watchers will only be available for DEC. As the value of DEC has greatly appreciated recently, the amount of DEC for Rift Watchers will stay at the Dice price of 3,000 DEC (if I remember the AMA correctly, that is) per pack.

We already touched Promo cards when talking about Orbs. Promo cards is a category for every card that does not fit anywhere else. Their burn value/collection power equals that of Alpha cards.

In addition to the Orb collection, Promo cards were created during events. For example they were handed out as bonuses during the first kickstarter event, from the now retired Mystery Potion or as airdrop during the last Bitcoin halfing celebration.

Reward cards are a major factor in the Play-to-Earn aspect of the game. Reward cards can be earned by completing daily quests and bi-weekly seasons. They have been around since Beta and have evolved alongside the main editions as can be seen by the different card frames and burn values that reward cards implement.

In order to keep reward cards scarce and valuable, all of them have a maximum print limit. Once reached, the cards can only be acquired by being purchased from other players. Be sure to check out this handy tool to learn which reward cards are still printing and how many percent of their print limit have already been handed out.

Gladius Cases give Gladiator cards that cannot be used in ranked battle or tournaments. They can only be used in Guild Brawls.

This addition has turned Guild Brawls into a sort of game in the game, because you also need to participate and rank well in Brawls to earn so-called Merits. Gladius Cases can only be purchased with those Merits. Other currency options are not available.

There are a few special aspects about this addition. The most remarkable is that all of these assets (Merits, Gladius Packs, Gladiator cards) are soulbound. This means, that they cannot be transferred between accounts. If you want Gladiator Cards, you have to earn them in the arena!

While not being transferrable, Gladiator cards can still be burned for DEC at Untamed burn rates and contribute to collection power. This makes them a valuable part in the Play-to-Earn aspect of the game. 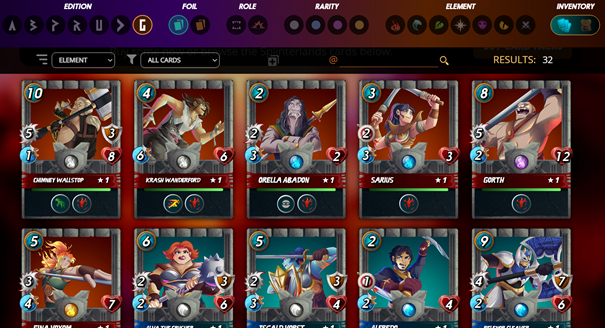 The overpowered Gladiator cards have greatly changed the meta of brawl battles. All of them have the so-called Bloodlust ability that increases each of their stats by 1, every time they kill an enemy. Because they are this overpowered, only one Gladiator can be used per match and team. The idea is to use them as a general who leads the other monsters into the arena.

The Splinterlands team is really doing there best in releasing new cards that complement with the existing ones rather than obsoleting them. And while some forms of the so-called power-creep cannot be entirely prevented, older cards are getting bonuses like higher burn values, additional DEC rewards per battle win or increased productivity on the future land expansion of the game.

I am excited for what is to come with and after Chaos Legion and am more than glad to have been a part of all this since the middle of Beta. How about you? Which card edition was your first?

Thanks for this explanation! As a new player myself, it's quite confusing to understand what happened in the past on Splinterlands, and it's nice to know the game's history and how it does affect us today.