Use Your Coingecko Candies for Airdrop

@idiosyncratic1 72
about 2 months ago
LeoFinance

Coingecko is one of the most popular crypto data trackers that is used by millions of crypto enthusiasts. Last year, Coingecko started the distribution fo Coingecko Candies which are a part of incentive program to make people visit Coingecko daily to receive Candies. 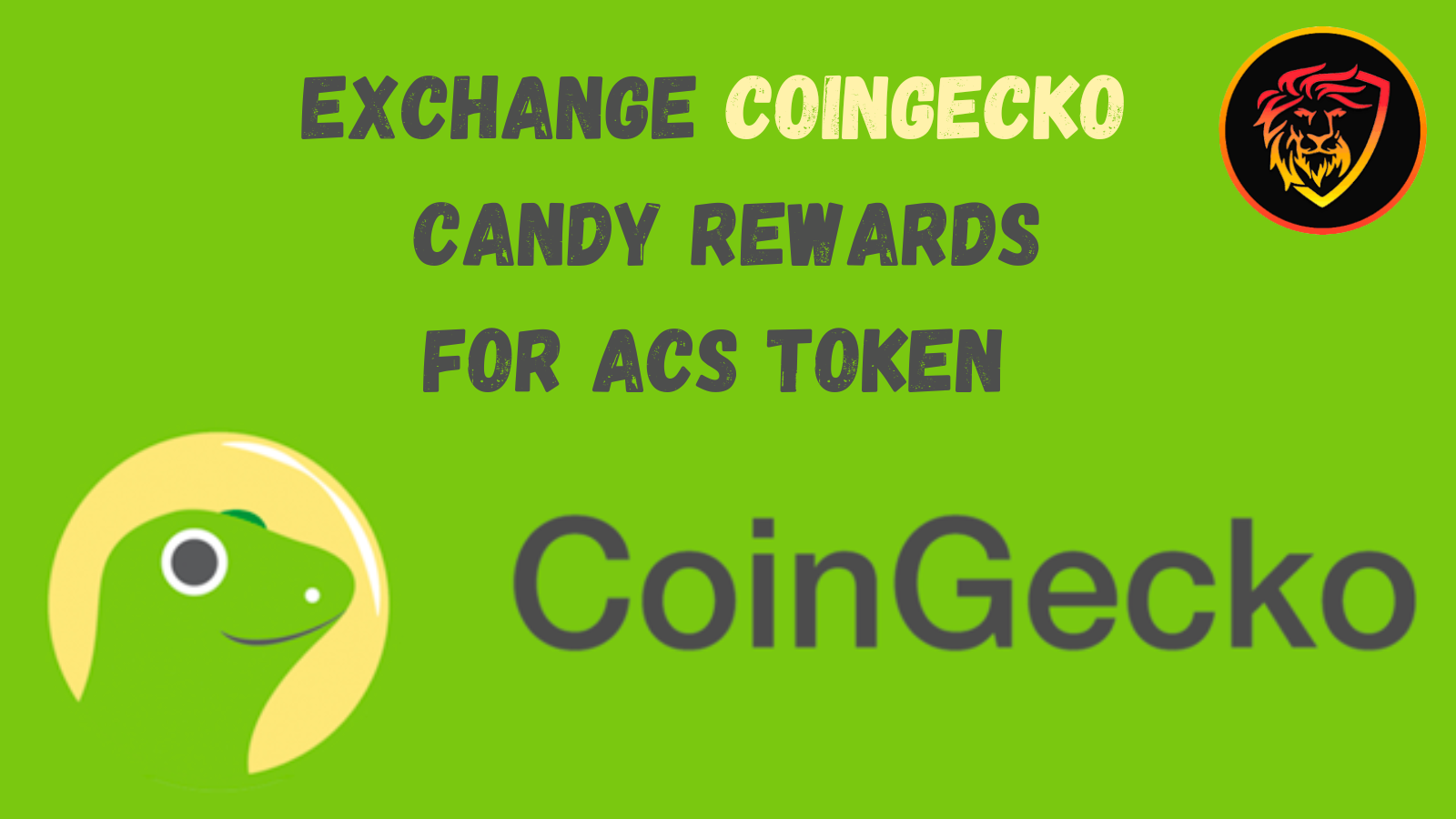 On Coingecko, these candies can be exchanged for several gifts such as Unstoppable Domain discounts to in-game items of blockchain-based projects. These rewards require a certain amount of candies and they have a limit that people can buy for each time. You can check the Reward Store to find out more. 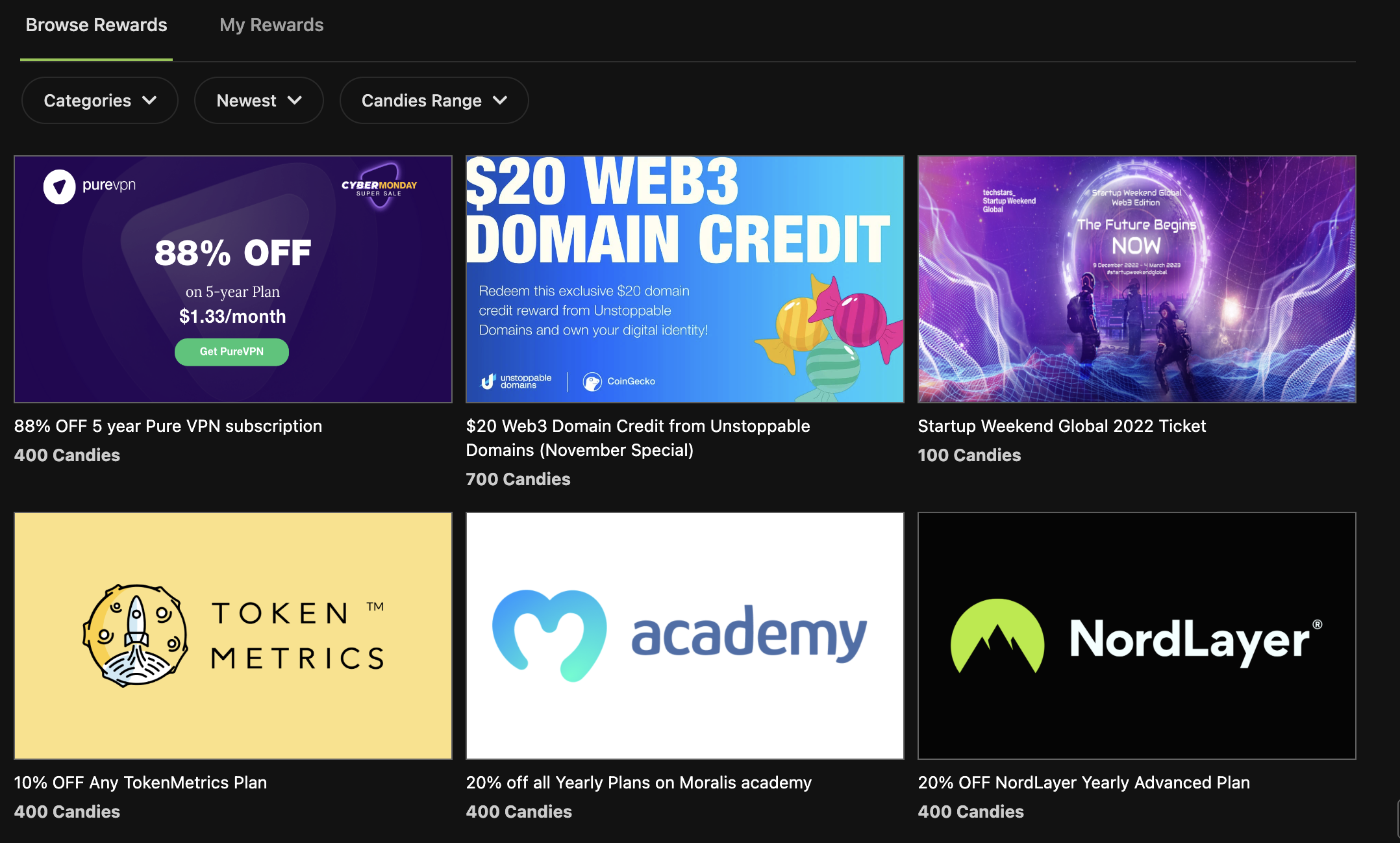 In my opinion, $20 Unstoppable domain credits for 700 Candies is the best offer by Coingecko so far. You can easily buy a couple of domains for $20 Credits 🔥 The domains are created on Polygon Network if you are interested in.

Acccess protocol established partnership with Coingecko and those who stake in Coingecko's pool will receive additional benefits from the side of Coingecko. Apart from that, those who have Coingecko Candies will be able to exchange it for the upcoming airdrop token, $ACS, through the store.

Additionally, CoinGecko users will receive the opportunity to claim $ACS via airdrop through their Candy Rewards store. Details on how users can claim the airdrop will be released on Friday, December 9.

Of course Coingecko and Coinmarketcap are competing to be the leading crypto data tracker. Before the rise of Coingecko, CMC was had some other competitors such as Messari and Coinpaprika but, with the rising interest on Coingecko, many people started to compare these two by putting the others outside the rivalry.

Unfortunately, the rewards of Coinmarketcap are always sold out before they are accessed by thousands of people. It may look prestigious in the first place but, honestly, people may lost their interest in time. The debut of ACS airdrop may open a new era in which these tokens can be used as Vouchers for airdrops rather than events or discounts.

I believe the airdrop / coin-swap for Candies will change the existing rewarding system of both sides. I think it is going to be beneficial for those who use the platforms ✌🏼

Have you ever exchanged your Coingecko Candies for rewards?

I think I need to revisit my coingecko account because I used to claim candies before and it´s over 500 candies I have claimed so far that I left. This is surely a good opportunity to claim this airdrop. Thanks for sharing this update.

Has the day finally almost come! My candies will be a crypto!

Fantastic to hear about this airdrop and the discounts from CoinGecko @idiosyncratic1, and as you said the domains has to be the best offer in the store, thanks for sharing and stay awesome.

@idiosyncratic1! You Are Alive so I just staked 0.1 $ALIVE to your account on behalf of @thisisawesome. (4/30)

I stopped claiming candies a while ago but maybe I should go back to collect some more Candies. I didn't use any of mine so I have some stacked up.

Never been to there site
Interesting tho
!MEME Dear @idiosyncratic1,
May I ask you to review and support the new HiveSQL Proposal so we can keep it free to use for the community?
You can do it on Peakd, ecency, Hive.blog or using HiveSigner

I never knew about the Candies. I am a daily user of CoinGecko. This article is an eye opener. Am going over to check it out. Maybe I have some candies to claim

@idiosyncratic1 72
about 2 months ago

You daily get them mate, check it out