I read a what's app posting that when he was about to die, Napoleon wrote in his will that he should be put in a coffin with holes for his two hands to be stretched out for people to see that he was taking nothing away from the world, he went empty-handed.

The Son of Man is going just as it is written of Him; but woe to that man by whom the Son of Man is betrayed! It would have been better (more profitable and wholesome) for that man if he had never been born!
25 Judas, the betrayer, said, Surely it is not I, is it, Master? He said to him, You have stated [the fact].
26 Now as they were eating, Jesus took bread and, praising God, gave thanks and asked Him to bless it to their use, and when He had broken it, He gave it to the disciples and said, Take, eat; this is My body.
27 And He took a cup, and when He had given thanks, He gave it to them, saying, Drink of it, all of you;

The disciples were having a great time of their life when Jesus was with them. Who would not be excited to have a boss who could do anything: restore sight to the blind, make the lame to walk, command the sea to be still.
what could be a greater possession to have! So when Jesus began to disclose His mission on earth to them, Peter told the boss "that is not your portion" literally.

The bottom line of all our acquisition is to be able to stay alive and live well. But hear Jesus : " for what is a man profited, if he shall gain the whole world, and lose his own soul? " Is it wrong to own property and possession? Not at all, but not at the expense of the Salvation of your soul.

We know that the second coming of the Lord is nearer than ever befire: what will He meet us doing?
During His first coming, the disciples dispersed and later went fishing after His death on the cross, forgetting all He told them about resurrection. Part of the denial involved in following Christ is not to do the shady things others do to get wealth and possessions. Others must see Jesus in the way we do our things

It isn't good enough having all you need in this world and be left out of the race to eternal life. 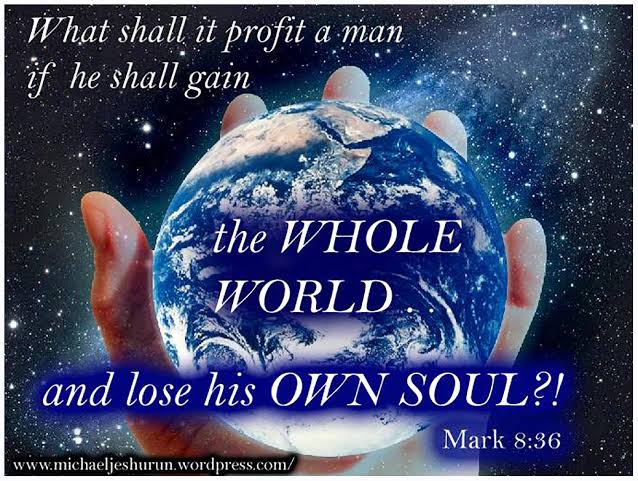