Which has Greater Authority? The Rule of Law or Hierarchical Power Structure?

@ironshield 73
about 2 months ago
lassecash 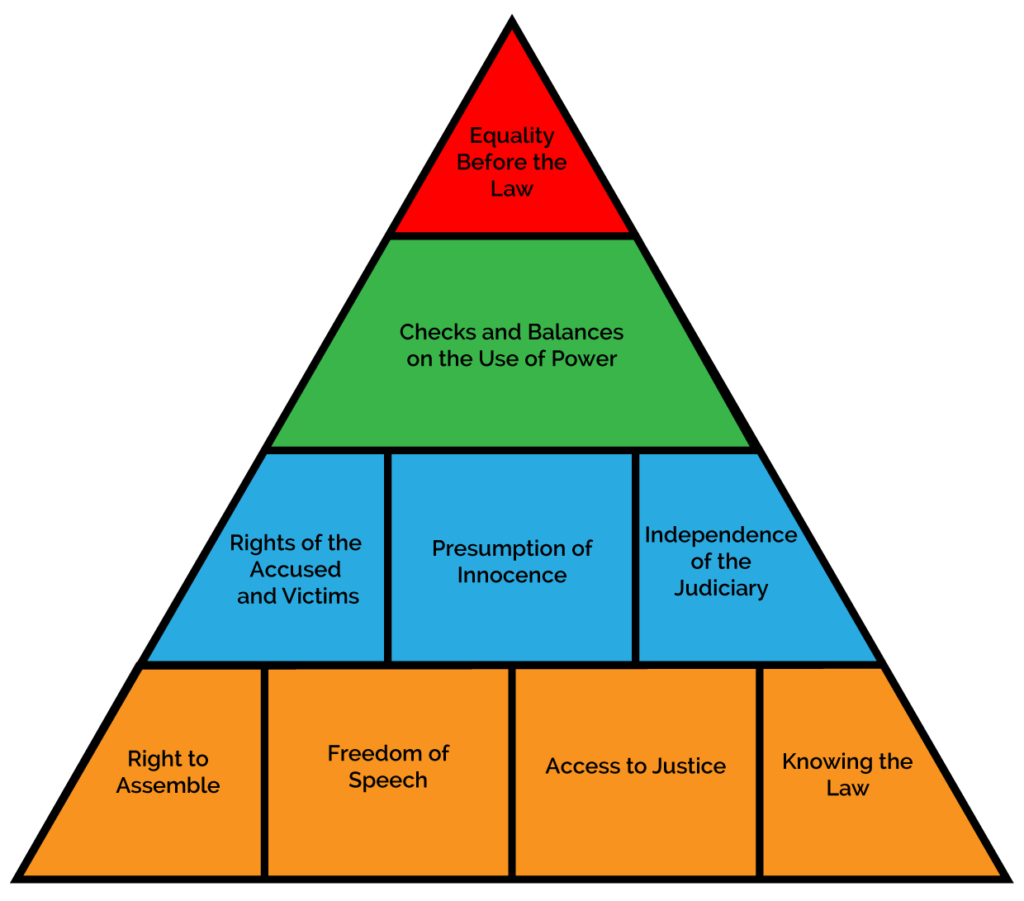 We Won, Now What?

Lauren and I put our names into the hat to be county delegates. We ran unopposed and won our position. Now, by the end of the week, we should know if we're going to Lansing (the Capitol of Michigan) to nominate Republican candidates for the November election.

As Lauren and I are dipping our foot into local and state politics, we are witnessing a power struggle at the local level that may have implications at the state level and beyond.

How it all Works

Within the US Republican party, delegates are elected at a county level based on population. All elected county delegates attend a "Republican County Convention" to elect a certain number of state delegates (and alternates) to go to Lansing for the "Republican State Convention". At the state convention, delegates will nominate the following possitions to run on the Republican ticket in the November election: 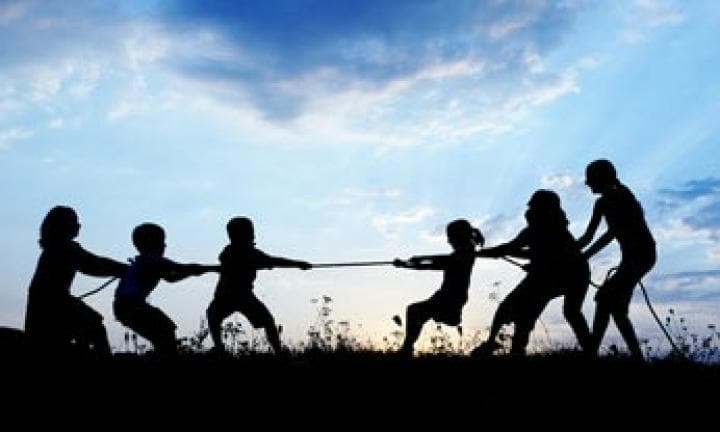 Without going into gory details, last April there was a major upset among the county Republicans. The "Chair" of the County Republican Party gave a speech that upset many people, criticising the Republican party and their position on multiple topics. He publicly endorsed a particular candate for governor (which the county "head" is supposed to remain neutral) and made a desperate plea to reform the party before it's too late.

Attending the April convention were the delegates which had the right to vote, and also "visitors" and "observers" and the media and press. Attendees became riled up in the audience and became disruptive, one individual even blowing an airhorn.

When it became time to vote, it was difficult to discern who were elected county delegates and who were "observers" and "guests". In the midst of the chaos, the convention staff ushered all observers out of the room, while the delegates voted.

The people who were removed from the room became extremely upset, calling people RINO (Republican In Name Only) and many other inflamatory phrases.

The first vote, once order was restored, was to remove the county chair from his position and replace him with a new county chair, because of his public endorsment which is considered out of order.

Yet they didn't follow rules of order on how to replace a chairman. They require, but did not have the required 2/3rds marjority vote and there is no provision for "vote of no confidence" in the Republican county by-laws outside of starwars.

The people outside of the room were horrified that the leader of the county Reublican party was just "de-throned". It seemed like a power play, a coup. In response, the original chair refused to step down.

There's a phrase "possession is 9/10ths of the law", meaning whoever possesses the asset, owns the asset. By continuing to hold the keys and act as "chair", he effectively is still "chair". He still had financial control and he paid the rent for a whole year on the office building.

The new "chair" was elected by the delegates. The previous guy was given a majority "vote of no confidence". So who's legit? Who does the State of Michigan recognize as the legitimate "chair" of the County-level Republican party?

They took it to the judge.

The judge ruled that the manner in which the previous chair was replaced did not follow the by-laws of the Republican party. It was ruled an illegitimate power grab, removing the chair and replacing him spontaneously like was done. 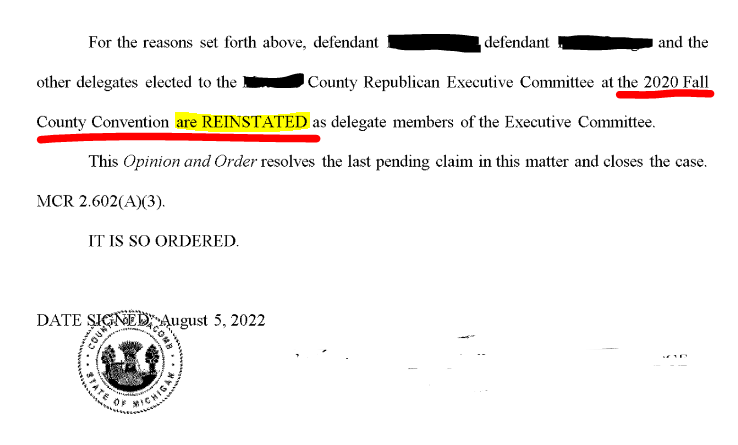 The law is on the side of the original chairman. He was officially REINSTATED to his position as County Chair.

Here's where we enter the picture.

This dispute was not resolved when we were elected county delegates. We received TWO notices of where the County Convention will be held and at the exact same time. Two different locations. One hosted by the original chair, the other hosted by the replacement chair.

Which one do we attend?

Which Has Greater Authority?

Here's where the original question comes into play. Which has greater authority? Rule of law or heierarchical power?

The law is on the side of the original chair and his convention would be technically legit, since he was not ousted properly and a judge ruled he was not ousted properly. The original chairman has been determined to be the official chair of the county party and his County Convention is the official convention, according to law and the judge's ruling.

The Michigan Republican Party is on the side of the new chair. They have demanded that the new chair form a new county republican party, effectively eliminating any trace of the former party members and refusing to seat any delegates elected outside of this new county Republican party. This is techially illegal according to the judge's ruling, however if it is contested, it would take so long to resolve the issue that the election would already be over. The Michigan Republican party has stated (verbally) that they do not accept the judge's order. The new chair is requesting the statement in writing, otherwise he will have to "walk away" and advise everyone to follow the judge's ruling.

IF both county conventions take place and the delegates are split between them, the Michigan Republican Party has the final say on which delegates they will accept for the state convention.

One of the two Chairs will have to be recognized as legitimate and the other step down. But which one?

It's civil war within the party and we're stuck in the middle of it.

We are entering an age in our country where we say the rule of law is the authority, but we've discovered all it takes is some heirarchical pressure and maneuvering and the rule of law is often ignored and the greater authority becomes the "authority". Nobody wants to get in trouble.

Laws require the consent of the governed. Bad laws can be nullified by the governed. The US constitution only addresses what laws can and cannot be allowed in accordance to the self-evident, unalienable rights given by our Creator.

That Creator is the God of Heaven, that God which the founders of this country recognize as the greatest authority.

We area all accountable to His ultimate authority.

Let us hear the conclusion of the whole matter: Fear God, and keep his commandments: for this is the whole duty of man. For God shall bring every work into judgment, with every secret thing, whether it be good, or whether it be evil. Ecclesiastes 12:13-14 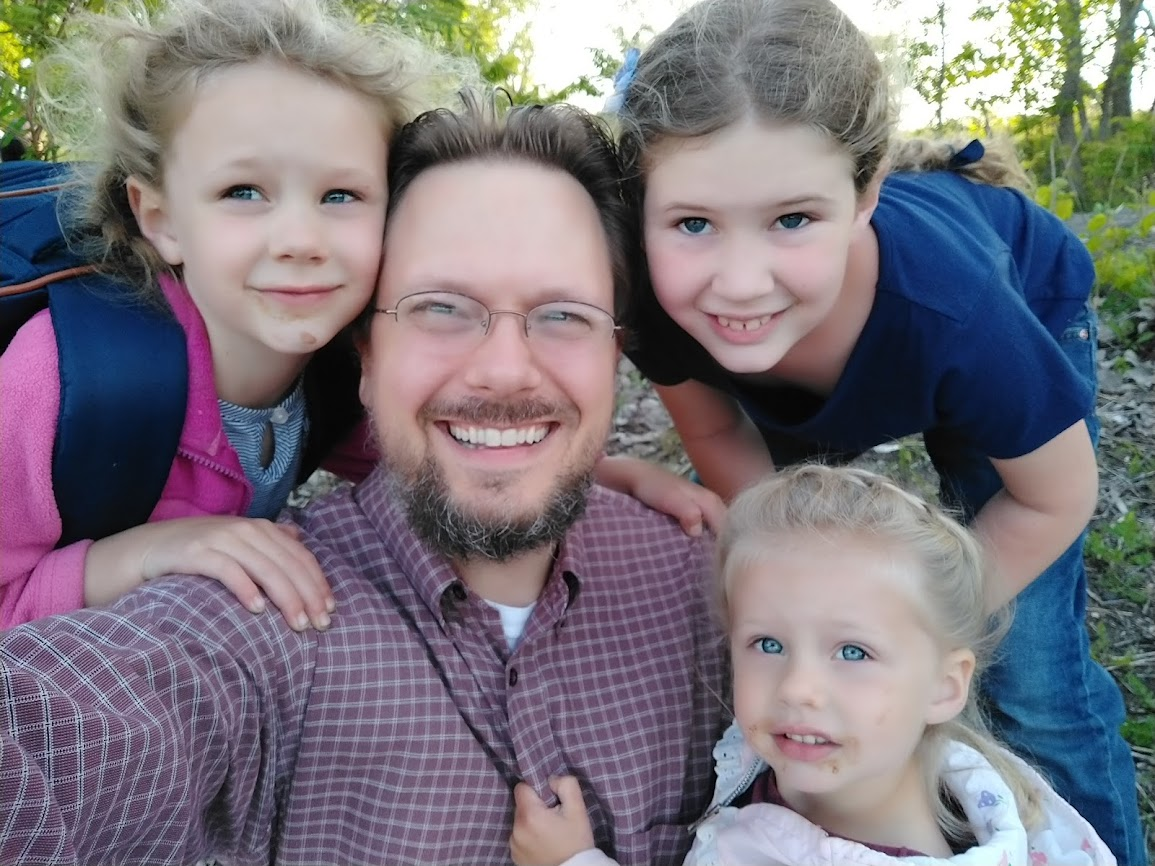 I second that motion. Amen!

@twicejoy, THE HiQ Smart Bot, has recognized your request. !PIZZA

Delegate [HP to @hiq.hive] or [BEE to @hiq.bee] to support the HiQ Smart Bot and its trails.

We are all accountable to His ultimate authority.

@ironshield 73
about 2 months ago (Edited)

That's for sure. Both sides of this dispute make it a point to invoke the ultimate authority on their side... no fear of God in politics anymore.

Opinion at the end there. But am not going to debate you.
Seems. Like a busy day or week.

It's a power game and I don't really like it when one side gets all the favors. It's like the system is crumbling as it keeps getting exposed.

It's like the system is crumbling as it keeps getting exposed.

Yes, as it crumbles, everyone squeezes everyone else to get what they want, rather than deferring to law and order to determine what is proper, regardless of what you want. If there is a grievance, it can be handled later, for now we can't fight amongst ourselves.

Quite a situation you've got there, @ironshield!
All the best for resolving it!
!HBIT

It really is a situation, it may be getting wild tonight, we'll see. It shouldn't be about picking sides, but that's how it's being seen. Our eyes are on the goal - getting to Lansing. If we go to a convention that the State has already publicly announced they will not accept delegates from, then that's not the convention for us.

!CTP Sorry your party doesn't seem united at a time when they should be desperately, intensely focused on one thing--getting that Witchmer woman out of the governor's seat. Y'all had it much worse than we did in NC (and our Gov. Cooper was terrible--probably had connections at UNC-Chapel Hill where one of the China Virus researchers was based and likely heavily invested in the vax$$) I'm a libertarian, but I will vote for any candidate who has the guts to oppose the pathetic, moneygrubbing establishment types that got us into this mess. May God save us from the tyrants--either from the fire or through it.

they should be desperately, intensely focused on one thing--getting that Witchmer woman out of the governor's seat

I agree with this sentiment completely. Everyone claims to want this, but some within the party are acting like old-school mafia. We heard a report that one delegate came to the home of another delegate and was shouting at the door that she has to go to the "right" convention. When she didn't come out, she tried talking to her children to get her mom outside. Intimidation tactics!

Another was fighting with my wife online, finally my wife asked her "Are you coming to my house with a baseball bat? If so, I'll take my little crew of crumb-crunchers to the inlaws." People within the republican party are acting like old-school mafia! Against themselves!

The irony here is that I have very libertarian views also (with a conservative base). The "camp" that we're selecting as the most effective to get the job done is seen as "NEOCON" and "RINO" and "ESTABLISHMENT". Yuck. Extremely insulting to be associated with these things, since it's exactly what we want to see gone.

May God save us from the tyrants--either from the fire or through it.

Yup, rebellion to tyrants is obedience to God. Every legal and political solution must be explored and tried first, but if it doesn't works, eventually the situation will get hot.