The season ended earlier this week so it's time to view how my rewards ended up again. I did end in Champion for the first time since playing Splinterlands but I don't know if I will regret that decision. So far though, I don't think it was worth it for all the stress and losing in ranked battles. It's also nice that GLX is being airdropped for staking SPS. 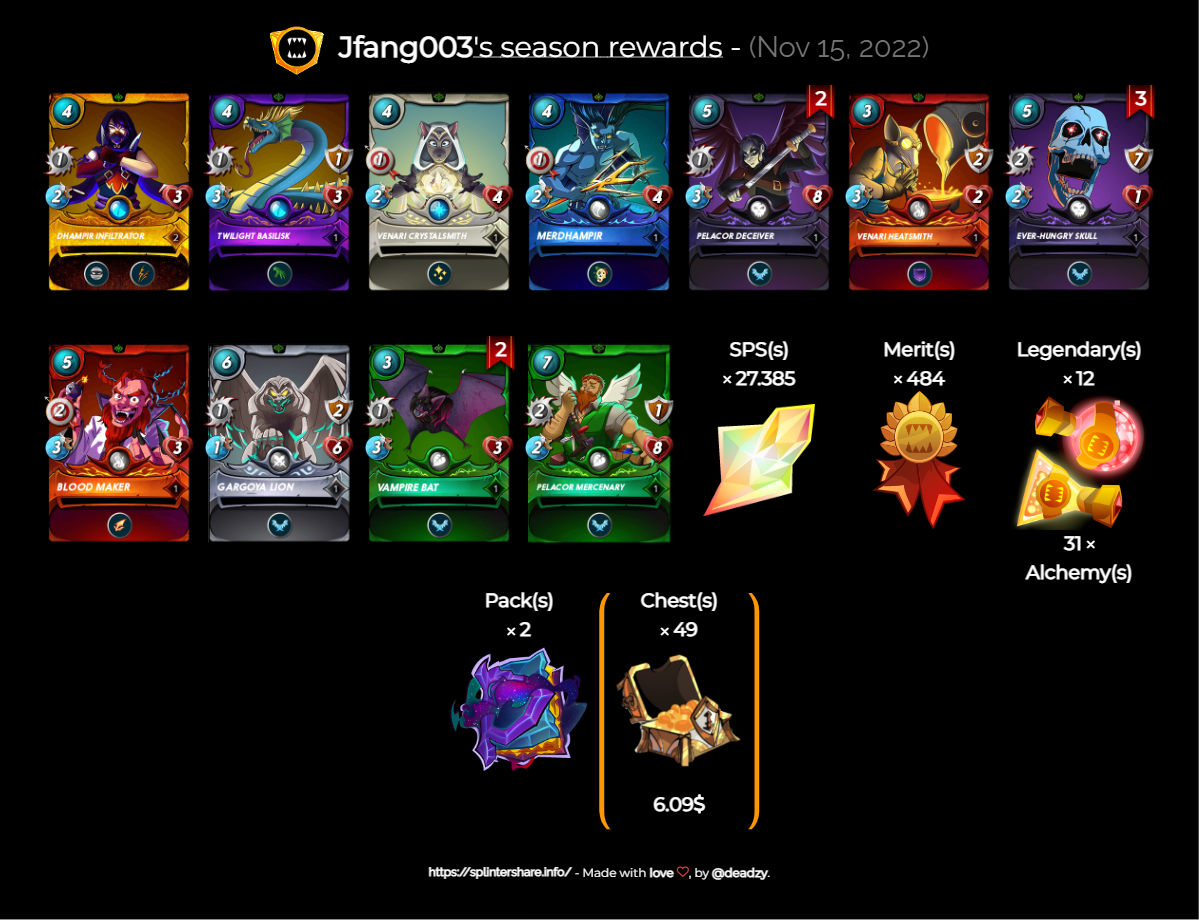 My luck was better because I did manage to get myself to Champion but I kind of regret that action. My new season has been nothing more than stressful as I lost way more than half of my matches and the constant losing streaks makes me wonder if I can even compete. I know it's just the start of the season but it's rough.

Going back to my rewards, I did get 2 chaos legion packs and a gold foil rare card. So it looks like a great pull so far. I didn't get that many potions and the SPS/merits look to be pretty low as well. That is the expected result since I did get fewer chests overall. On the last day, I did stop myself from using up a lot of my energy capture rate because I did not want to get knocked down from champion. After all, I got them because luck and my win streak gave me enough points. However, I wonder if that was even the right decision because it's been so tough in the new season. My rewards from the season rewards and brawls allowed me to buy 2 packs. I opened them above but it doesn't like I got anything nice from them. It's a bit unfortunate that I didn't get anything that great and most of those cards, I don't use that often. I see myself defaulting to using things like Quora or a reach tank with bloodlust most of the time. I hope my next opening will go better.

With the GLX airdrop going on, I decided to just move any SPS that I earn into being staked. The airdrop will be going on for a while and the APR of staking is far above what is in the liquidity pools. I am taking some profits off from GLX because I don't think prices will hold and I don't want to be caught in the unstaking time periods. One thing that I learned was that I needed to claim my battle, brawl, and reward chests SPS. It doesn't get claimed with everything else. So you manually claim it and this is the snapshot for me for like a season. I do believe that I last claimed it at the start of the previous season and it's not a bad earning from one season or so. The collected rewards from everything happen to be 471 after collecting my liquidity, gameplay SPS and staking rewards. It's not that bad but it should increase the airdrop I get by a bit and my plan is to just sell the GLX. I don't know what I will do with the Hive generated but I have the choice between Splinterland assets, Hive Engine, or GLS assets when things get released. I am just undecided but increasing my SPS in the game doesn't sound like such a bad idea.

My rewards were better than last time but I kind of regret my own decision to stick in Champion for the season's end. The problem with that is that I am in Gold and I can't just stay in Silver until the end of the season. My gladius packs were not that great and I decided to stake my SPS to get more of that GLX rewards.

Feel free to leave a comment if you read my post. If you have any questions, feel free to ask and I will do my best to answer.

By delegating your HP or some token to the @thranax bot, you are helping to support the community and the bot and earning healing rewards every day! and you will also get token with healing, here you have all the information https://hive.blog/pgm/@thranax/token-and-hp-summary-week-1

Well, why exactly did you regret being in champion, since you could earn more there? Well, I guess it's a bit complicated, overall, your reward isn't bad at all if I might say, I think they're quite good, let me guess, they were even better than last season? As for the GLX, buying more SPS would be sweet.

Closing my season in diamond means that I start in Gold rank and I have to fight out everyone in Gold rank. Before, I could stop myself in silver and accumulate more chests with a better win rate. My deck is better in Silver compared to Gold and my win rate has been horrible. So battle-wise, I am losing a lot more now with everyone trying to advance their league.

Your season rewards are quite good, I hope you are settling into the new season now. I can imagine its been tough for you.

Yea the rewards don't look that bad but yea it's tough. I don't like fighting because I have been on the border between Silver and Gold since the start of the season. Even if I stray away from it, I eventually get back there in the end.

Yay! 🤗
Your content has been boosted with Ecency Points, by @jfang003.
Use Ecency daily to boost your growth on platform!

Not bad rewards I would say!

Selling some GLX was a smart play I believe. I'm of the opinion its better to cover every base then to load up on just one. I sold a little of my GLX also. I then took those funds and traded back and forth a little to up my return. I then took the total amount of HIVE earned from selling GLX and profits from trading and purchased DEC with it. If DEC bounces back to its peg I will be left with the decision to Trade for HIVE or possibly something else. If not I'll have a great discount on my next Splinterland purchase.