Good news for Cosmos, bad look for Ethereum - dYdX on the move.

Big news came out in the last couple of days, which has Ethereum maxi's perplexed and disappointed, and Cosmos eco-system participants over the moon. Decentralized exchange dYdX has announced that it is building V4 of its protocol, not on an Ethereum roll-up where it currently lives, but as a stand alone chain built using the Cosmos SDK. 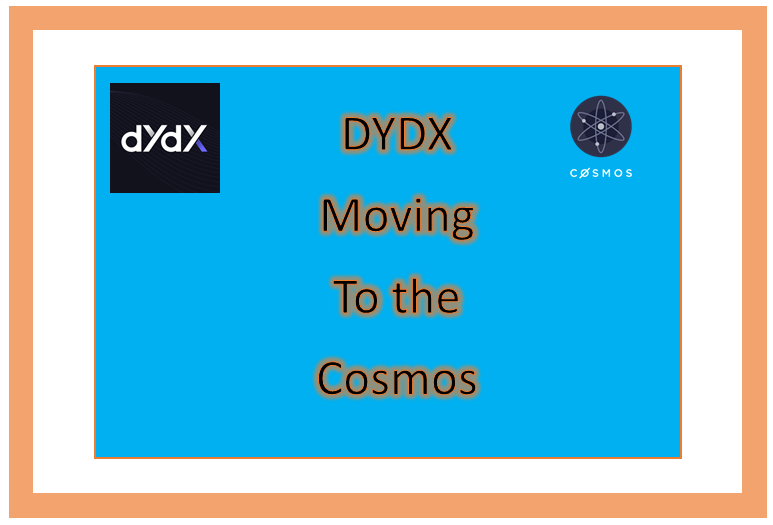 dYdX is an orderbook Dex, specializing in Perpetual contract. Aimed at high volumes of trades, and sophisticated traders is the impression I get, having never used it, and barely heard of it until the last couple of days. It is a highly used Dex, and currently it is based on an Ethereum rollup, powered by Starkware. 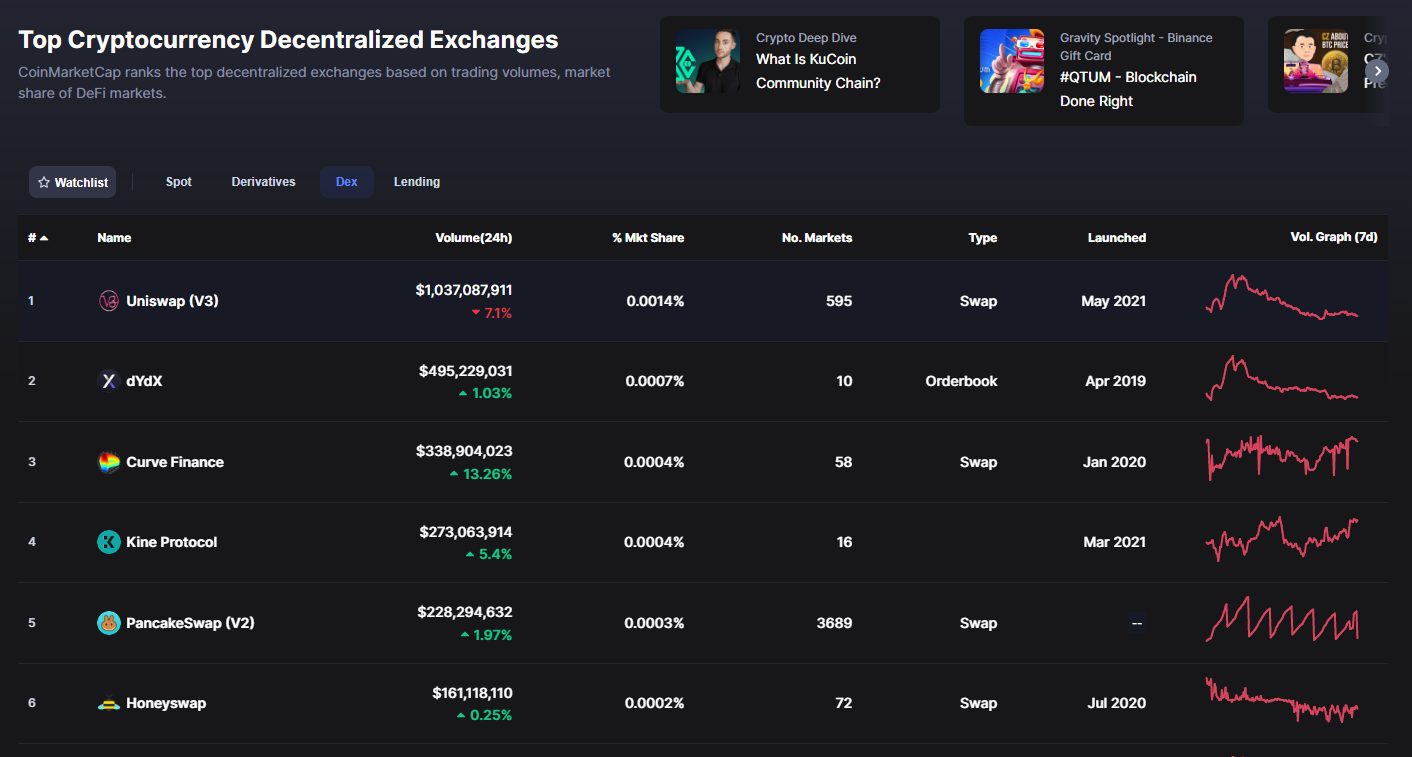 As you can see from the above screenshot from Coinmarketcap, dYdX is a significant protocol, ranking as the number 2 Dex by volume in crypto according to CMC. Ahead of Curve, and Pancakeswap for example, and second only to Uniswap. So the news that they dropped this week is significant, and a major structural shift in the market.

dYdX is building its V4 of its Dex on a stand alone Cosmos SDK chain. They have researched to available options, and decided that their needs are better served by spinning up their own chain, rather than remaining on Ethereum on a layer 2. By using the Cosmos SDK, they gain a fast, low fee option, and a highly performant settlement layer for their Dex. Ethereum constraints were reduced for them by living on the Starkware rollup, however they have decided that building a Cosmos chain, adapted to their specific needs represented an improvement in decentralization.

This news has prompted a twitter storm, with many salty ETH maxi's throwing out lines like "No one uses Cosmos" and such. However, others have had a more measured approach, and looked into the "App chain" vision of Cosmos, compared to the "build everything on one chain" vision of ETH. The decision by dYdX is a vindication of the Cosmos ethos, of App specific chains that can all connect, via the IBC protocol.

One of the things dYdX is planning is for their new chain to have no gas fees. This is possible for Cosmos chains, and a customization option. dYdX is planning to charge their users a percentage based fee, which will be used instead of Gas as the income for Validators and token stakers on the new chain.

A key point for dYdX is to use the chain for settlements, but to keep the order book off chain. With this move, storing the order book in memory will become the validators job. They will validate the on-chain transactions, and hold the orderbook (or part of) in short term memory so it does not need to be all on-chain. It is envisaged that this will allow dYdX to scale up significantly.

dYdX will be building its own chain, not living on any one else's.

Here is a meme posted by a founder (the founder? I'm not sure) of dYdX which sums up the reactions pretty well. 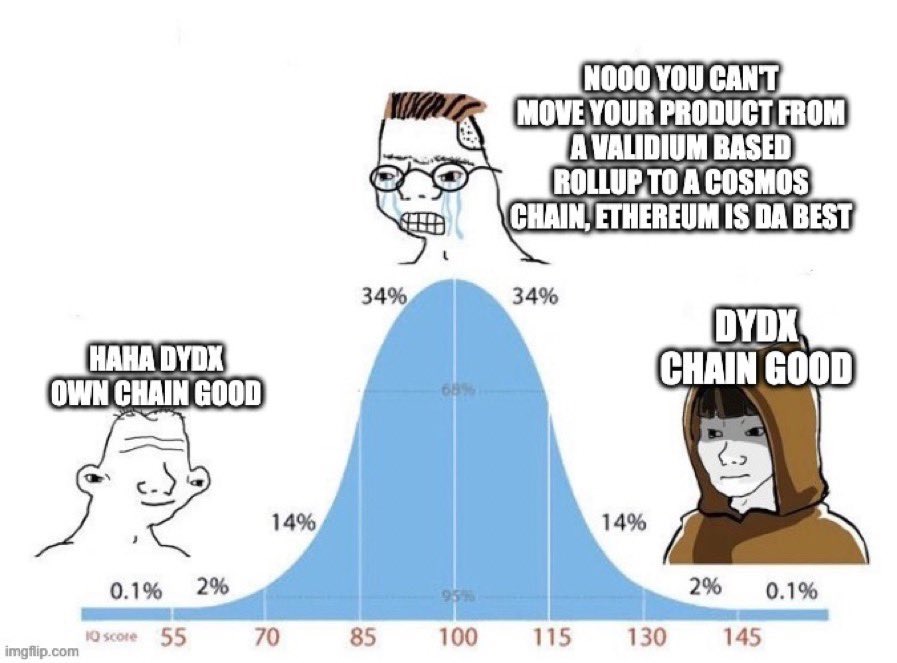 To see more of the reactions, check responses to Antonio | dYdX or the official dYdX account.

So what do you think about this move?

Let me know in the comments below.

The experience of using multiple chains and IBC in the Cosmos is much better than EVM experience, in my opinion. Fast, and low fee TX's. Interchain accounts and shared security will push the next wave of growth.

Agreed... people think I am crazy when I say there is a TVL flippening coming... Once you have messed around with IBC chains and keplr wallet... it is night and day.

I listened to this on Bankless Podcast today.
*Surprised was I *

It is a surprising move, but logical when you think about it. Won't be the last project of significance to move away from their base and build their own Cosmos chain. Why pay a fortune for a polkadot parachain when you can spin up a cosmos chain for free, and link to significant network effects through IBC.

When ATOM launches its shared security, then the floodgates will open of new projects launching chains will really open.

Wow
Thanks for the knowledge
I am still learning about COSMOS

Cosmos approach seems logical to me. A major Dex building in cosmos will certainly give more exposure to Cosmos.

Yeah, it will definitely bring more capital and exposure to the Cosmos eco-system. The network effects are growing all the time, and the "internet of blockchains" narrative for Cosmos is looking stronger by the day.

i support dexs making decisions that make their life easier. however i think bridges to and from are a real danger here. as they have proven highly vulenerable in the past.

Bridges are always a risk. It will be interesting to see how this goes. I have not seen any exploits of the IBC protocol, and it has handled millions of cross chain TX's.

If they can get a native cosmos based USDC supported (rather than bridged), that will help a lot.

I don't know about the effect on Ethereum, but their maxis seem pretty pissed. For the Cosmos ecosystem, it's definitely great news, after it's been affected lately by the UST collapse and then the LP issues on Osmosis. The question is, is all that volume there for Ethereum or for dYdX? Because if it's for dYdY, even partially, a lot of liquidity will come to the Cosmos ecosystem.

It's always fun to watch Maxi's go into melt-down when they see something moving away from their precious chain. Multi chain future is inevitable, and maxi's can't handle that.

It will be interesting to see if dYdX volume does hold up after it moves, or if it is a playground for Eth people that will find something else with high gas to play with.

One other side benefit is that I have seen they rely heavily on USDC as their stablecoin, and will be pushing for a native Cosmos eco-system version of it, rather than a bridged version. Native USDC in the IBC would be nice.

Native USDC in IBC would be a huge game-changer, because it would enable a lot more USD cash to flow towards the Cosmos eco-system, as well as through THORChain. The possibilities just keep on multiplying it seems.

This is going to be huge! Saw this announcement yesterday. It is however going to be a direct competitor with Kujira. But since it is already in operation, I think they are going to be the first mover for leverage trading on Cosmos.

Kujira is something I need to dive into, have not looked at it yet. I still think it will take dYdX a while to actually build out what they want and get it launched - I've seen timelines by the end of the year, hopefully.

Note to self: Gotta go research Kujira, something to put on the agenda for the coming week.

I did not realize that dydx was #2 behind only Uniswap. I definitely knew PancakeSwap & Curve Finance were both top-5, but that's definitely a game-changer for the Cosmos ecosystem, if it succeeds!

This can only be good news for the COSMOS eco system and considering how low the prices have sunk, it is another reason to accumulate the different tokens there.
COSMOS have spent a lot of time and effort getting their infrastructure sorted and I am sure there will be many more making the switch from building on Eth!

The future is truly interchain or cross chain trading.
I wonder what Cosmos system does to encourage peer to peer trading?
Does COSMOS have a version of Thorchain?