Another Purpose For Being "Conscious" In The Energy We Radiate 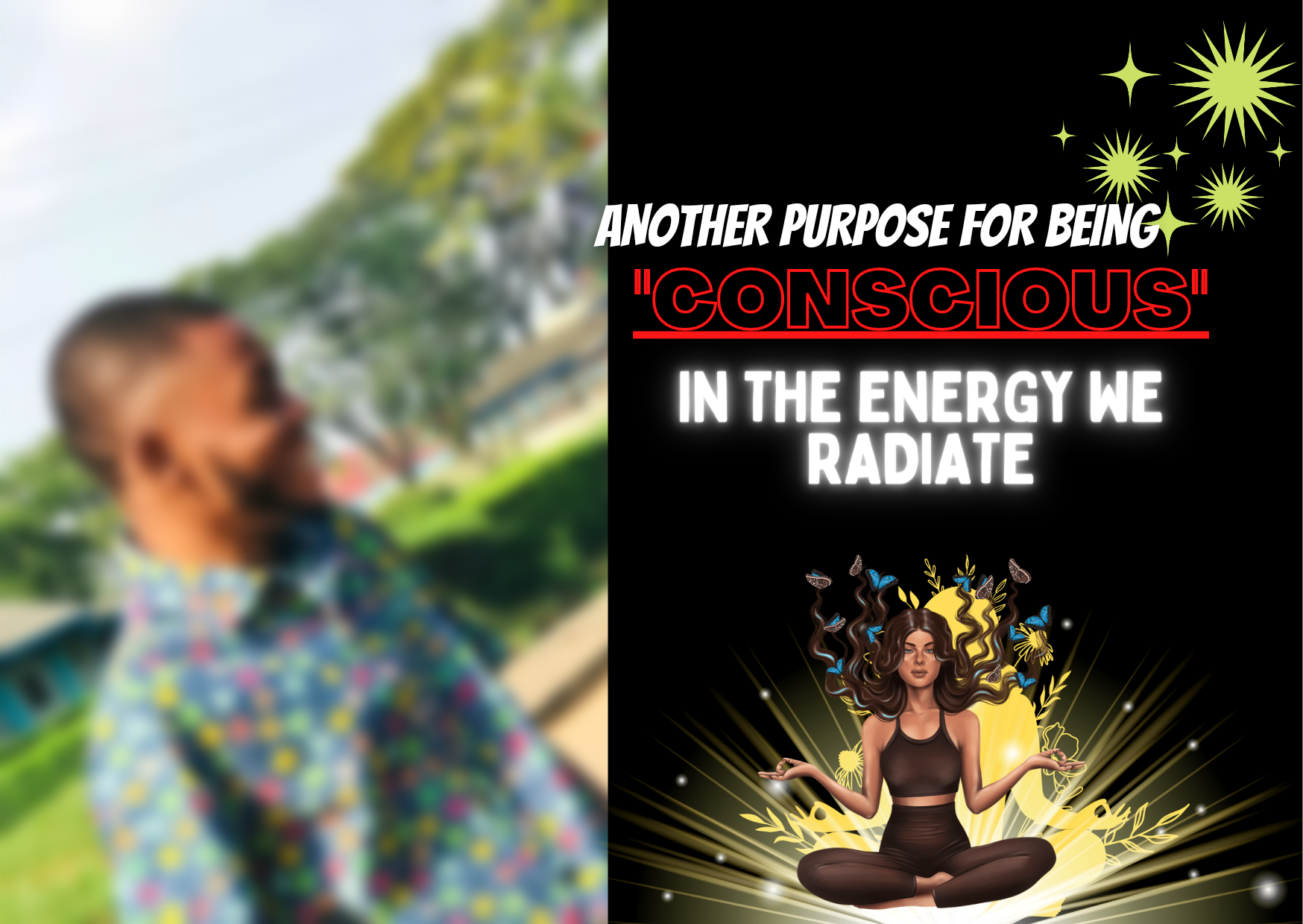 A lot of people find it difficult to scrutinize themselves correctly. And this comes from a lack of conscious awareness. This is to say they're a poor judge of character and it's even worse when they cannot place a sense of "rightness" or "wrongness" in the lives they're living. However, this begs the question.

"Do we really know what's right and what's wrong or are some people just living in denial of it for their selfish purposes?"

I don't know. However, one thing I know is that the level our consciousness can get to when we train our minds can be totally immense.

The human anatomy is already programmed to comprehend and react

We're like a reservoir; empty at birth but full at death with experiences, knowledge, regrets, lessons, and all sorts of emotions.

This only proves that we're meant to learn along the way, because being conscious means, we're setting ourselves to improve in many aspects of our lives that can aid development. Communication is a huge aspect of human development that we need to be fully conscious of. It's a pity that a lot of people do not feel conscious or aware of the need to grow in communication, and I think one of the reasons why this is so is ignorance and a sense of entitlement. When I was younger, one of the things I learned was the art of dissociation.

For example, I was a teenager when the world was crazy about Facebook and one of the things I learned was that people show interest or disinterest by the way they reply to your messages.

There's one thing we often called "big energy" and this is giving off the same vibe as you were given in a communicative process.

A lot of people feel that if they're friends with someone, it gets to a time when they shouldn't bother to reply to the messages of these people anymore or fuel the enthusiasm that keeps that friendship going because they're already familiar with them.

What they fail to understand is that relationships die a natural death, when their essence is no longer there. The art of dissociation is a process of separating oneself from a situation, especially when one has noticed a rather negative change in the aura of another person.

"This truly means that dissociation is feedback, but most time a lot of people mistake it for a reaction* In this generation, people mistake communication to be a one-way thing.

However, when I was growing up I learned that communication is the biggest aspect of humanity and that we shouldn't even try to limit ourselves.

Some people feel that others are interacting with them because they eschew value, however, if this is the case, we must also learn to see some aspect of value in others, it's more of a sentimental rather than a logical thing. I live a very spontaneous life, I'm an overthinker and I see rejection, failure, or even disappointment before they even happen. This is the same with appointment, acceptance, loyalty, love, and originality.

It's easy, we're humans and largely habitual. This makes us predictable to an extent. This makes it easier for one to prepare for circumstances especially when they've seen it coming. I believe that It's not enough to live alone, we must exist and let our aura or personality create a ripple effect of impact.

This must be evident enough in our personal development. For example, I'm hardly a complainer and this is because I believe we cannot influence people to change how they feel about us by merely asking them to change. The words we say might be powerful, but they might not be enough to change people.

The power of motivation only works wonders when people are willing to change. Whilst we might live in the ignorance that we do not know what's good or bad, I feel that a lot of people purposely do this to rid themselves of commitment and guilt. We cannot convince people to act in a certain way unless they're truly ignorant

This is why you cannot teach, change or influence people unless it comes from within them. However, as people, we should individually learn to be flexible when it comes to change, because it's an aspect of our personal development that we should heed to. However, on the other hand, it's important to be spontaneous. While it's not advisable to always return the same energy, it's important for us to mildly back off especially when our mental health is on the line.

It's a wake-up call for people who are feels bad or wronged when people give them the same energy they are used to reflecting.
The self-entitlement is embedded in their unwillingness to see the wrongs they've done because they choose not to be conscious or aware and this is why it's difficult for such people to change

It was a year ago I decided not to be a complainant after listening to people like Bob Proctor and also reading the great book "THE SECRET". But after that honestly I feel easily drained by complainers, like I don't even want to hear a single word of complain so it won't affect or register in my subconscious

But it turned out the other way round, because those around me who haven't developed to that extent now thought I'm not being caring or I'm not a good listener... Please in cases like this what is your advice to help me cope with such people

I also have the same thought @josediccus. You know as we progress and get to understand the deeper things of life, we tend to find somethings sickening. I hate complains, bad energy and slow pokes. And I'm thinking, am I being insensitive because i just can't let them ramble negativity in my ear? Is there a better approach?

One thing is, we'll mostly get criticized for choosing peace and tranquility over racour and bad energy. It's the way the world is shaped, people see a problem when you decide to choose you.

There should sure be a better approach my dear, we just have to find a way to help this folks as we are helping ourselves, because wether we like it or not, they'll still be part of our lives...

Smiles, that reply though

In reality, we often blames ourselves when we decide to step up and people around us fails to do the same. You have to let these people understand that life's continuous and they have to develop alongside it else they might be left behind. I do not like to complain because I believe people knows what's right and One complaining about them is futile. It's important to let people discover their mistakes and decide if they want to change. We cannot influence people to change unless they're willing to.

I use to always feel bad when I am ahead of my friends or anyone close to me. Especially when we started doing a particular stuff the same time. Until one day I had to talk to myself. If you don't step up, it is your choice and you should not blame anyone for your mistakes and stagnation.

Well we have people who would blame you for anything, whatever, even if they've got themselves to blame, they still wouldn't rise to the occasion. Hatism lies in the blood of unintentional people.

This post should be printed as a pamphlet and handed out. Honestly! Like communication is so important that it speaks even when it is silent. I always know that energy communicates than words do. I read actions and not your words. If you tell me you love me, that's good but I want to see it.

I also believe energy has its own language and it says more about a person than their character ever could. Through their aura, you know if they truly seek change. You perceive from their hunger (which is always visible). You can tell because they'd give off a strong scent of willingness and determination. It's really amazing.

I don't know what it is with people and thinking things are always the way they see it. I always keep an open mind and yes I tend to not get attached because change can come suddenly. For example, while imbibing new values and cultivating new principles, I remember that I may have to change them or modify them as the world and my walk in life progresses because I won't be single or young forever. Still, I also keep in mind that I'm my own person and the world doesn't dictate what or who I become. So, I try my best to not get blinded by my beliefs. I try to not let entitlement run the show. This life is easy if we let it.

Communication is an essential aspect of life that we often neglect and I think a lot of people knowingly does this, which is wrong. Silence, as a feedback speaks voluminously. But most people take as nothing. They fail to read through feedbacks to improve their lives and one thing we mustn't neglect in life is personal development.
I keep an open mind too and even if I might be rigid in my resolve I tend to open up a little bit and allow the wind of change to check and balance me.

So, I try my best to not get blinded by my beliefs. I try to not let entitlement run the show. This life is easy if we let it.

You're one of the free minded people on this chain that's not erroneously tethered and I sometimes appreciate the person you are, how far you've come and how well you've grown.

I didn't value communication much as most people do when I was growing up. You see, I am one of those who are differently built and I am a constant target of bullies. This made me shy away from people. And instead of talking to them, I would rather observe them from a distance. This made me LAG GREATLY in human communication and in interpersonal skills.

I was already a full grown adult when I realized the value of human communication. It might be too late but I did my best trying to talk to people - and it is very difficult.

This is one of the main reason why I am now trying my best to become a better writer where I can learn how effectively share (radiate) my thoughts (and energy). 😊

There's no age that one cannot communicate well, it's a continuous learning process, hence I guess it's understandable that it's coming late for you. No one should go through that childhood you went through, I wasn't bullied but I had a rocky relationship with my parents.

Indeed. That is why I am mostly talkative around other people. 😁

We're like a reservoir; empty at birth but full at death with experiences, knowledge, regrets, lessons, and all sorts of emotions.

This is deep man. Sometimes I feel I am stepping to death just.Whatever I do its just a part of the journey. Nothing else. And flexibility. Yes I think today we feel shame to be flexible. That's the fact make chaos in the world. When we are flexible many problem can be solved easily.

Thanks for this beautiful blog. Such a strong writing. ❤