We all knew that bitcoin was a great investment, but did you know that it might be the best ever?

Bitcoin has been a great investment from just about any way you look at it. If you look at it from the date it was created until now, it becomes pretty much unparalleled.

In fact, you don't even need to go that far back, just going back the last decade, bitcoin is pretty much the best performing asset of recent history, and possibly ever.

Over the last decade, bitcoin's annual compounded growth rate (CAGR) is an astounding 200%.

What that means is that bitcoin has returned roughly 200% every year over the last 10 years, compounded.

In case you didn't know, that is unheard of in financial investments.

Here's bitcoin compared to other great investments over the last decade: 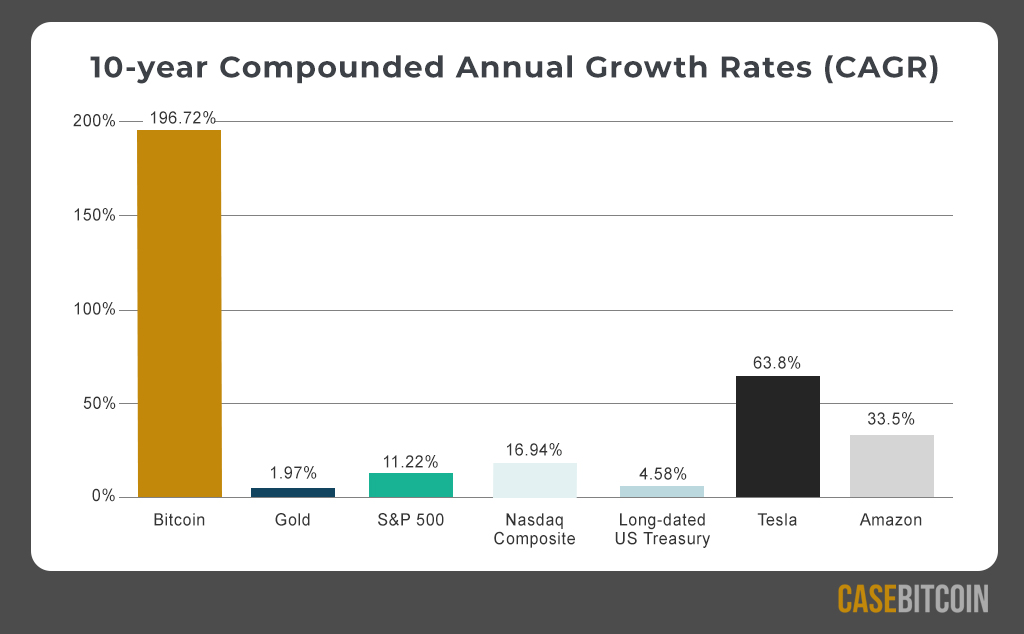 As you can see, bitcoin blows away the competition here...

TSLA has been one of the best investments ever for many stock investors out there, but it gets lapped by bitcoin.

TSLA has a CAGR of 64%, which is unbelievable compared with most investments, but it less than half of what bitcoin has done.

When you see data like this the first thing that comes to mind is cherry picking the data....

What I mean by that is if you pick very specific time frames and compare things, you can basically get the data to say whatever you want it to say...

"There are three kinds of lies: lies, damned lies, and statistics."
-Mark Twain

However, that isn't the case here...

With bitcoin, you can basically take any multi-year time frame over the last 10 years and bitcoin still blows away everything else, even when including the terrible bear markets: 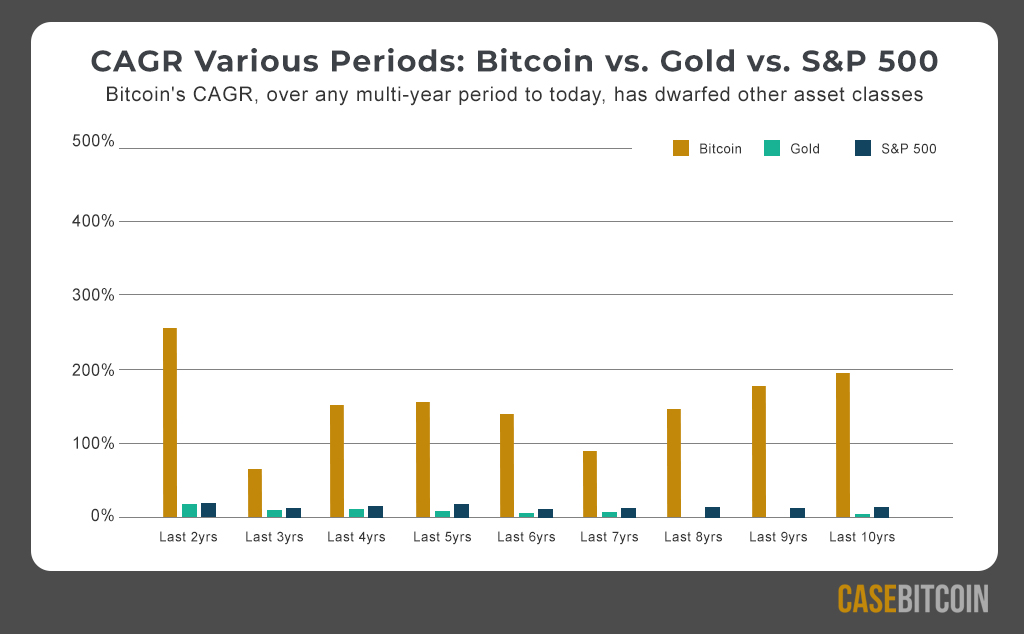 Ironically, it's worst CAGR comes when looking at just the last 3 years, which includes that terrible bear market I mentioned above... and it still blows away everything else with a CAGR around 70%.

But but but, what about GameStop stock? Wasn't that the best investment of all time.

However, over the last decade that 200% CAGR I mentioned above comes out to 5,200,000% return on investment for bitcoin.

Yea, it's not even close.

The really crazy thing is that this model is going to look over more absurd a year from now when it fully factors in the peak craziness of the current bull market.

Those are some pretty impressive numbers! It would be a tough call for me to decide if I wanted to go back in time and buy Apple stock or buy BTC. I am guessing I would probably choose BTC. Less tax implications (for now). Like you said, it would have been the best return on investment!

Yea, it's pretty simple really. Bitcoin blows AAPL out of the water. An investment is an investment and bitcoin wins hands down.

I hope you don't mind this comment, which isn't related to your publication. I would like to encourage you to join my personal charity initiative, which I've organized as a way to celebrate my recent anniversary on HIVE blockchain.

Goal of this initiative is to help good friend of mine (from Venezuela), who's having young son who suffer Asperger condition. He just had his 14th birthday and we're trying to raise some funds to buy him small gift.

Entire payout of my post will go to his father (@Joseph1956), so all I would ask you is to visit this post and drop generous upvote.

Help us make this world a better place. Even if just for one kiddo.

ps. I know that this comment does look like it's automated, however I posted it manually and I will check your reply (assuming you will respond).

rumors are you dump leo and hive to buy steem. I dont like that

Um what? I haven't dumped HIVE to buy STEEM? I've been powering up HIVE and same with LEO...

1st I remove all your rewards next I take you off all auto voting trail. I start with @slobberchops .

Please talk to Asher, Taraz and Marky for details

What details exactly? Have you even looked at them? They are claiming I am selling HIVE and LEO for STEEM which isn't even true.

Dude! And you still have audacity to talk! Why am I not surprised. Greed is such a vice!

By the way, in case you misunderstood, I was not asking you to talk to anyone. I was asking slobberchops and the rest of your voters to talk. His name was just happened to be at the top so I tagged him. You don't need to talk to anyone.

You mean to say that what they are saying is false, yes I have the audacity to say that.

My last word on the subject.

Did you even bother to look into what they are claiming? I mean do the facts even matter to you?

Thank you for the kind words. I appreciate that.

And yea I got that, I was saying what they were getting upset and downvoting me about wasn't even true. I wasn't selling HIVE and LEO for STEEM, nor have I been. I was simply moving HIVE between accounts and they misinterpreted that as me selling it. I've been powering up HIVE and LEO for many months now.

lol so now people are downvoting others cause they don't like how they spend their hive/ leo?

Not only that, it wasn't even true...

No problem him writing.

He will just never make a single hive writing it. That's all.

so what is your issue @azicon?

Only I am told he moved nearly 400K hive.

This is a Social Network.

Thank you for the kind words. I tried to make them as interesting and informative as possible. I haven't decided what I will do from here just yet.

Good point, thank you for the level-headed input.

Would it be better if he bought BTC, EOS or something else.

Are you going to have all users report what they buy?

Would it be better if he bought BTC, EOS or something else.

Also, ask that to the people that were stolen hundreds of thoysands worth of steem from them by JS

in my opinion, Bitcoin is already the most incredible asset that has ever been created or ever existed