@kevinnag58 65
about 2 months ago (Edited)
LeoFinance Let's face it, one way or the other, trading is at the heart of the cryptosphere. Whether we like it or not, we need a diversity of tokens within our wallets to accomplish different tasks or to invest in that 'new hot token'. Or, how many times have you needed native Ethereum but was only holding native Bitcoin?

Well folks, THORChain to the rescue.

The THORChain protocol and mechanisms it utilizes are novel as it supports a great number of native tokens across many blockchains. For this reason, THORChain is uniquely poised to deliver on its stated purpose of becoming a decentralized exchange between any cryptocurrency [see, e.g. THORChain. Introduction. (Accessed October 9, 2021).

This article is submitted as a supplement to the THORChain Coin Guide, and two versions are contained herein. A technical version is submitted first followed by an overly simplified presentation of THORChain's mechanics. It is also submitted as a contribution to the Alpha Project - #LeoAlpha advanced by @khaleelkazi.

THORCHAIN - THE MECHANICS BEHIND THE TRADE (TECHNICAL VERSION)

At it's core, THORChain is merely a vault manager without a leader, and the mechanism employed to make the THORChain protocol operate may be broken into four distinct components as set forth in the official THORChain webpage:

Within the THORChain swap mechanism, the nodes are connected to the required blockchain utilizing one-way state pegs which employ created addresses across the chains, all controlled by the THORChain nodes. [One-Way State Pegs: "Nodes are connected to BNB, BTC, ETH (and other) chains via Bifröst modules. Once nodes are done syncing, they begin watching vault addresses on each chain. If they ever see an inbound transaction concerning a vault address they watch, they deserialise it and convert it into a witness transaction." THORChain. It Starts with One Way State Pegs. (Accessed October 9, 2021)].

Witness transaction parameters are basically the same for each chain and are as follows:

Nodes used by THORChain employ MPC (Multi-Party Computation) technology like, for example, TSS (Threshold Signature Schemes) and DKG (Distributed Key Generation) so that one single node can not gain control over any user's assets.

Each observed transaction is processed by THORChain collecting 'signers' (the keys of every node reporting a 100% identical transaction) and once a supermajority (67%) of nodes agree, the transaction progresses from a 'pending state' to a 'finalized state'.

In the system, each chain client contains only the logic necessary to connect that particular chain. It is the observer that bears the weight of most logic" Finalized transactions occur as a result of the operation of the 'state machine' which is likewise responsible for ordering transactions, computing state changes, and outbound vault delegation:

The 'txOut' appears as follows:

Notice that the 'txOut' contains both an 'InHash' and 'OutHash' item. These are utilized to identify the originating transaction and the accounting completion transaction.

When the finalized transaction is created by the state machine, it is the function of the Signer to load and serialize it into the correct form for the destination chain using the applicable chain client. 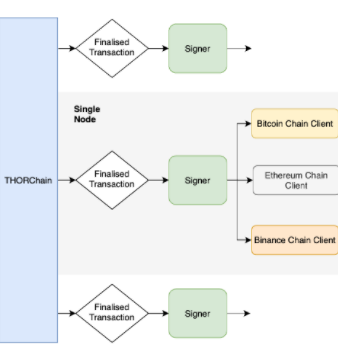 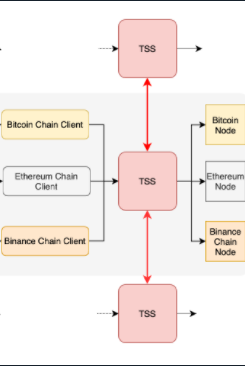 THORCHAIN - THE MECHANICS BEHIND THE TRADE (SIMPLIFIED VERSION)

How does THORChain achieve this high degree of interoperability in its ecosystem? The answer to this question lies in its use of the native RUNE token through it's vaults. Using the ETH to BNB (BSC) swap contemplated above, the transaction would be perform in the following manner. The THORChain protocol would break the transaction into two separate transactions automatically: 1.) It would first swap ETH for RUNE tokens; and, 2.) then swap RUNE tokens for BNB (BSC). By using this mechanism to conduct swaps the ability is present for THORChain to perform cross-chain swaps.

THORChain has not been without it's problems due to hacking, however, it dealt with the hacks in an trustworthy and professional fashion. Nonetheless, the cross-chain exchange of native asset mechanisms employed by THORChain work, and work very well. It is a clean and efficient mechanism that is poised to bring the THORChain ecosystem much success in the future as it provides an essential service to the entire cryptosphere.