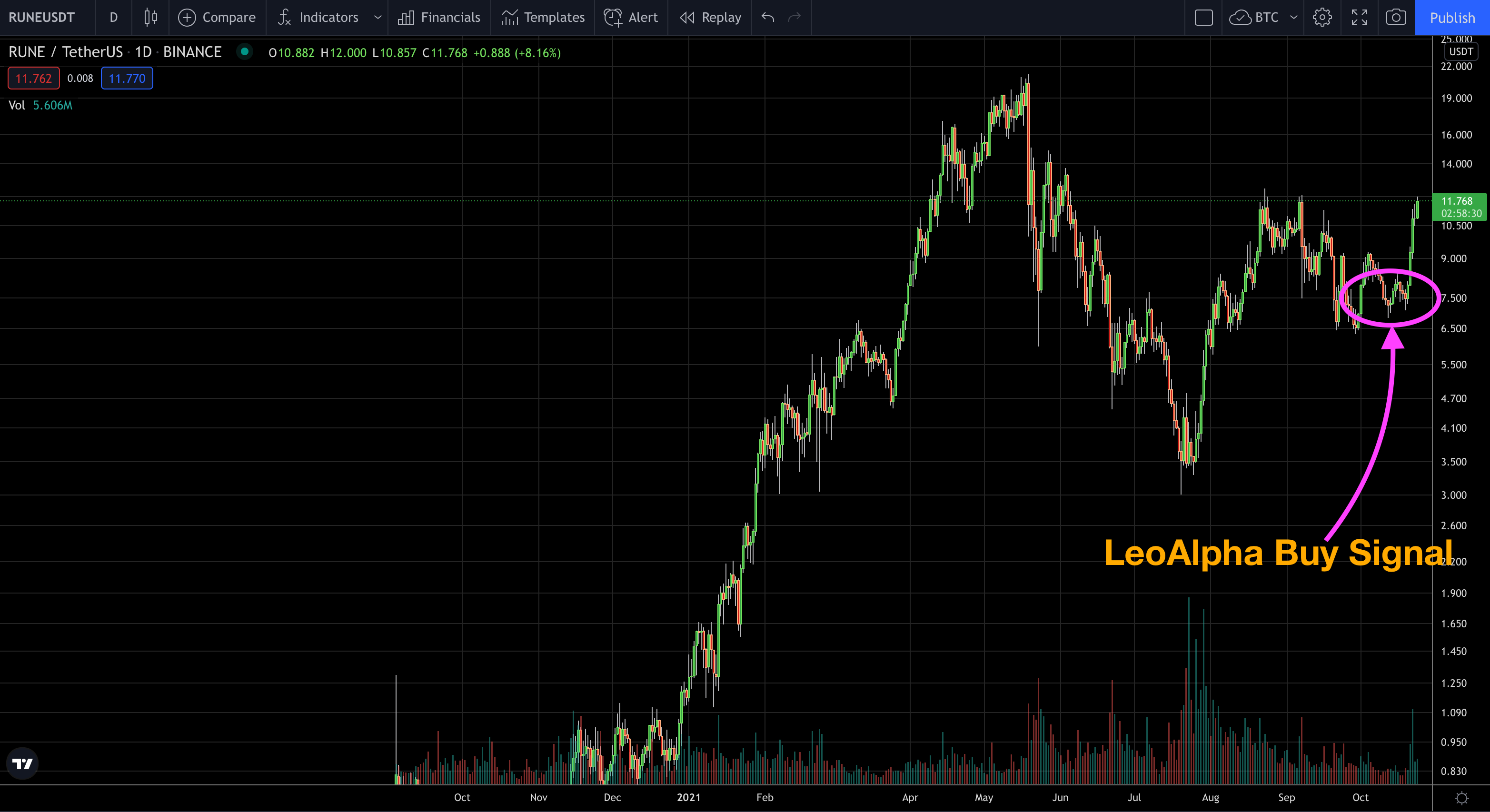 5 Days Ago (October 19th), I published my latest LeoAlpha post titled "Trading RUNE Around the #REDEMPTIONOFRUNE Event". If you followed my price prediction for RUNE, I had said that I expected a quick recovery to $12+ following the #REDEMPTIONOFRUNE event where ETH/ERC20 trading resumed.

Checking in today, RUNE is now trading at $11.60 with a high on the day of $12. Looks like our first series of #LeoAlpha content has performed quite well. 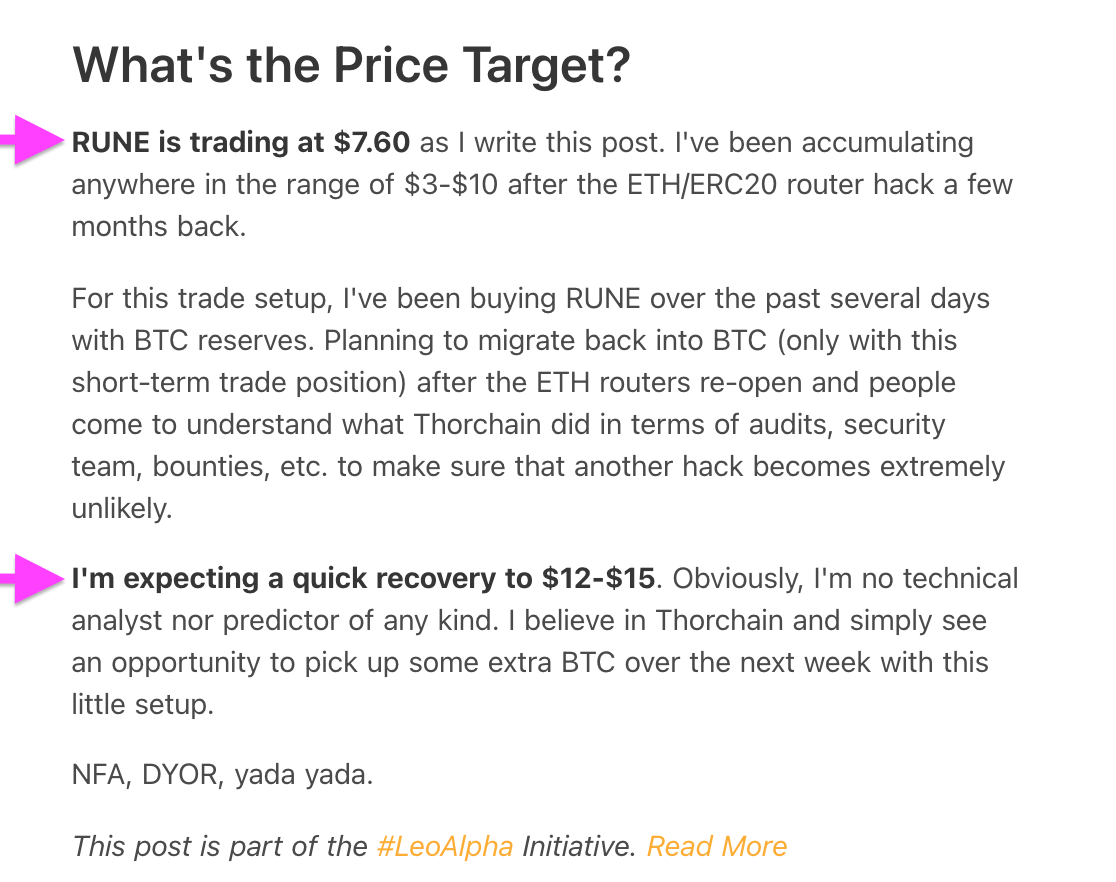 Don't get it twisted: #REDEMTPIONOFRUNE was just the beginning of what I anticipate to be a massive run in the RUNE price. I've positioned my portfolio to be heavily weighted in RUNE over the past 2 months.

My original position in RUNE started about 12 months ago when I started buying sub $0.40. I have continued to buy up to $10. I believe that RUNE is going to become a top 10 cryptocurrency by market cap as it solves the #1 issue in crypto: cross-chain superhighway.

I mentioned in my post 5 days ago that I have both accumulated a massive spot position in RUNE (waiting for #RAISETHECAPS, so I can add that into LPs) and I have also built a leveraged long position on RUNE in anticipation of the $7.60-$12 move that I predicted.

I have not sold a single RUNE (nor do I plan to) and I also haven't touched that leveraged long just yet.

The spot RUNE I own will likely never get sold. I'll LP that and hodl it for dear life as RUNE becomes a top 10 crypto right under the noses of this entire industry. Overtaking every DEX and CEX in trading volume as it becomes what I belive will be the ultimate superhighway for cross-chain asset transfers, liquidity and (eventually) more sophisticated ThorFi applications like Synths, Collateralized Self-Paying Loans and more.

3 Bullish Events Stirring Up RUNE By the End of 2021

I'll likely create 3 more LeoAlpha posts talking about each of these at length, but I'm bullish on 3 more things happening on RUNE 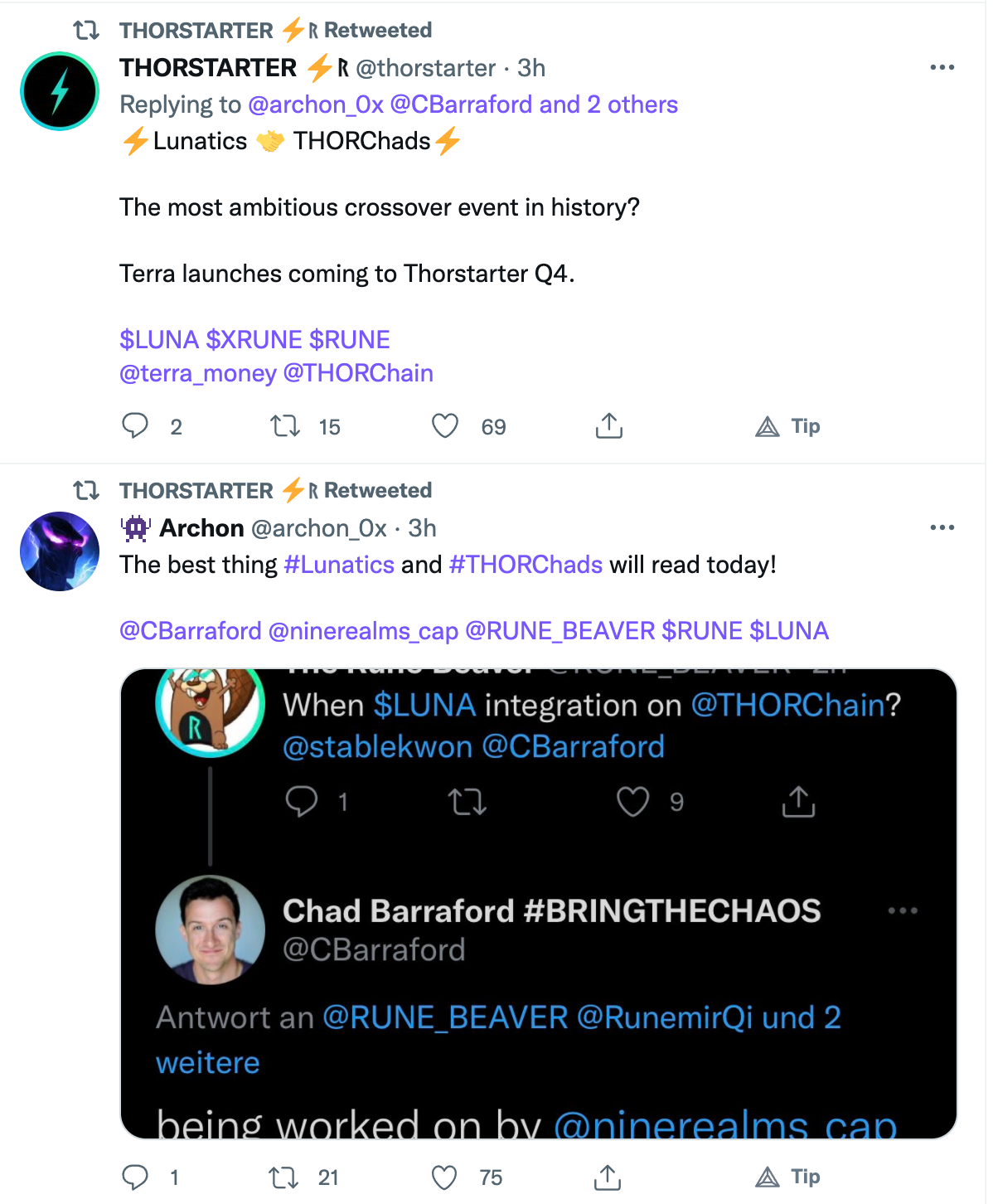 From my involvement/usage of Thorstarter since their initial token launch and more recently in their DAO ecosystem that is evolving quickly, I know that Thorstarter is looking to get into the IDO game with Terra. Helping to launch projects, raise funding/liquidity and bring a new generation of long-tail value back to the Thorchain ecosystem.

This makes me very bullish on Thorstarter (and of course, further bullish on RUNE itself).

Today I saw Chad mention Nine Realms is working on something else Luna related. I haven't had time to dive into what they're doing yet but I imagine this will becoming a topic for another LeoAlpha post in the very near future. 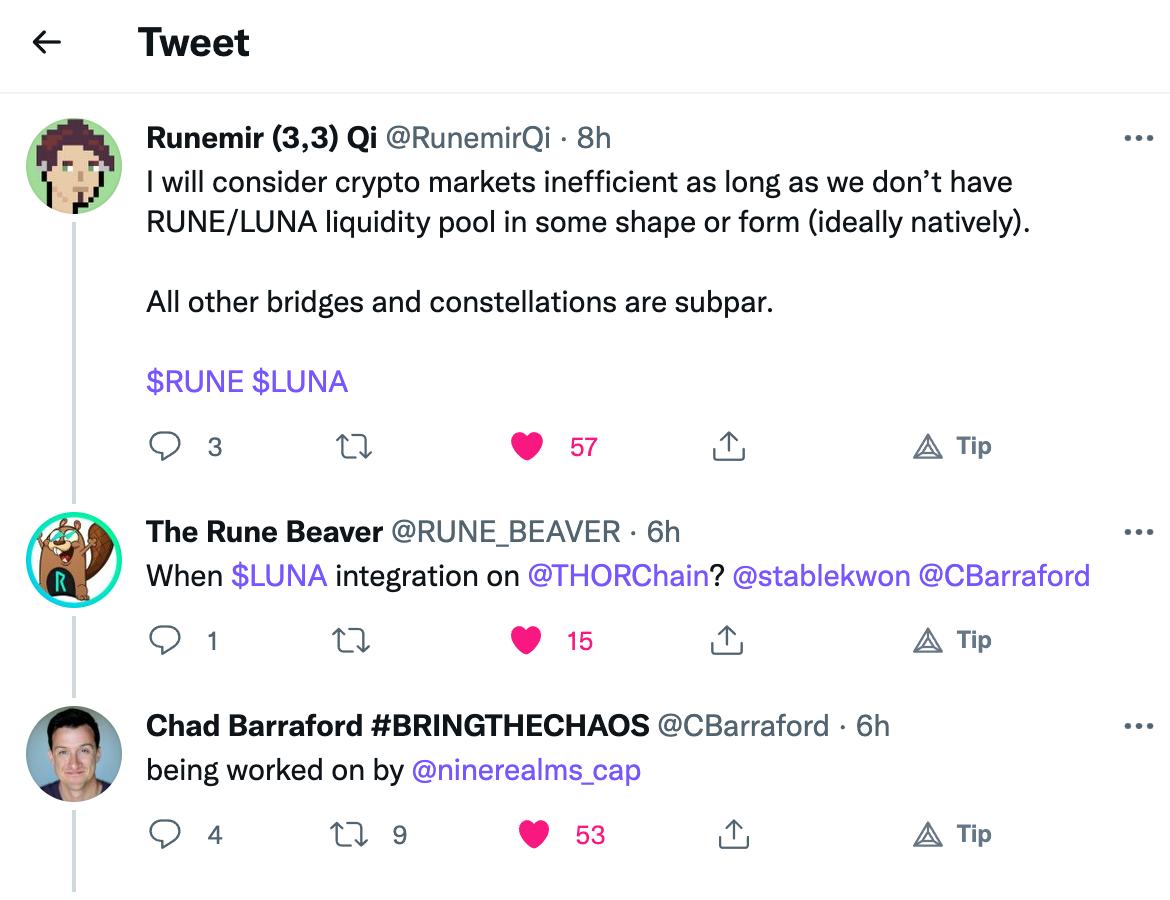 Mainnet signifies a lot of things for Thorchain. From a user/investor perspective, the most bullish aspect is that #RAISETHECAPS would be no more. It would be open season for liquidity and we would be able to come and go with our LPs as we please.

This is super bullish for RUNE as the #1 usecase to become a first-class citizen becomes available for anyone and everyone.

Bonus 4th point to be bullish on RUNE (and a major reason why I've accumulated so much: LEO-RUNE LP... by End of Year? I've personally got enough RUNE stacked to donate to our LEO treasury and get the LP immediately pushed to the top of the list. With our community of 🦁s I also know it would be a sure-fired add. Now that ETH/ERC20s are back online, adding LEO to Thorchain is going to become a very near-term conversation in our community).

We're already seeing an incredible level of dev activity happening which is using Thorchain as a foundation layer protocol. Seeing this much activity so early in the birth of Thorchain (especially with RAISETHECAPS, REDEMPTIONOFRUNE, etc. in place) is extremely bullish to me.

Thorstarter, Shapeshift, Ninerealms, Thorswap ... .. .. .. the amount of projects being built with the idea that Thorchain is a foundational protocol is mind-boggling. I can only imagine what this looks like 6 months, 1 year and 10 years from now.

My EOY price prediction for RUNE is $60 with more short-term being a recovery to $20 around the next #RAISETHECAPS event (which I believe will happen around the first week of November.

$60 RUNE would put it right in line with the UNI market cap (currently). Like I said, I consider this a "FUD" or a "Conservative" comparison. RUNE (Thorchain) is so much more than a DEX and even a cross-chain DEX.

This post is part of the #LeoAlpha Initiative. Read More

My EOY price prediction for RUNE is $60

You got me! Finally tipped my toes into RUNE and bought some. I must say that I'm impressed with the ability to carry cross-chain swaps of native tokens in a decentralized manner. That's a big deal. Yeah, I might just buy RUNE again before it gets out of hand :D

RUNE is moving crazy, Liquidity Pooling is opened and only the sky is the limit. If it will move to $60 it will be like an earthquake on the entire crypto space, but I still hope for the $100 price target.

Well, it just touched 12$ so cheers to that call! Looks good to see

20$ will look very interesting though, 60 fucken dollars even more interesting

Rune does seem to be a game changer.

Ok that is some pretty impressive analysis. Frankly I don't know much about technical analysis, but there seems to be a decent amount of people on Leo who are successful with it so something must be working.

RIP ME lol I didn't get in on RUNE when you all started talking about it and now it feels too late. Need to kick myself in the butt and realize ever minute wasted is in fact too late and get started now. The DeFi aspects of it look very powerful.

Now above $13. I think I better hold a few asap. Thanks for this.

I held a small long position since like a year ago, but after reading your post last week I decided to add to it like 30% cannot say that I'm not happy. :D

Rune is truly revolutionary. Glad I got in at $7.9 after your last post. Would be exciting to see it hit $60 by year end

Sad I didn’t get the news earlier, but am putting LUNA on close watch right now

I'm really glad I read your earlier post about Rune and decided to jump on around $0.9. Think there is still big potential to grow Rune even more

Dang, I wish I would have paid more attention a long time ago when you were really pushing RUNE. I know you have been a big proponent of it for a while now. I never got around to picking up any. If you prediction holds, it still isn't too late, but I am not sure I have the liquid funds right now. That seems to always be the case!

So this is how an android works

LEO-RUNE LP... by End of Year? I've personally got enough RUNE stacked to donate to our LEO treasury and get the LP immediately pushed to the top of the list. With our community of 🦁s I also know it would be a sure-fired add. Now that ETH/ERC20s are back online, adding LEO to Thorchain is going to become a very near-term conversation in our community).

I'm surprised nobody has really mentioned this little nugget of gold in the comments yet.

A LEO:RUNE LP would be huge for not only LEO but Hive as well.

Cross-chain interoperability is the future and this will be Hive's gateway to completely permissionless, cross-chain native swaps.

I can't wait to hear more.

I'm really excited about RUNE. I sadly still haven't bought any yet though. I'm not on Binance which makes it tough.