Thorchain is an ambitious project working towards providing DEX solutions to blockchains. It's been one of poplar and successful project with a TVL of around 240M$.

THORChain is primarily a leaderless vault manager, ensuring that every stage of the process is byzantine-fault-tolerant.

THORChain's key objective is to be resistant to centralisation and capture whilst facilitating cross-chain liquidity. THORChain only secures the assets in its vaults, and has economic guarantees that those assets are safe.

Yesterday, Thorchain reported an attack vector which was discovered soon and chain was halted. According to Coin Desk a total of 4000 Ethereum were lost during this event. This is worth roughly 8M$ at current ETH prices. Good thing is that it was detected quickly and nodes decided to halt the chain to stop it and apply the patch. Official figures are now 5M$ far less than the initial estimated loss.

Thorchain has announced that it will compensate the lost LP's from Thorchain treasury, so no person will bearing the loss except the treasury itself. The attacker paid roughly 2.8M$ as slippage fees causing a decent revenue to LP holders and nodes. 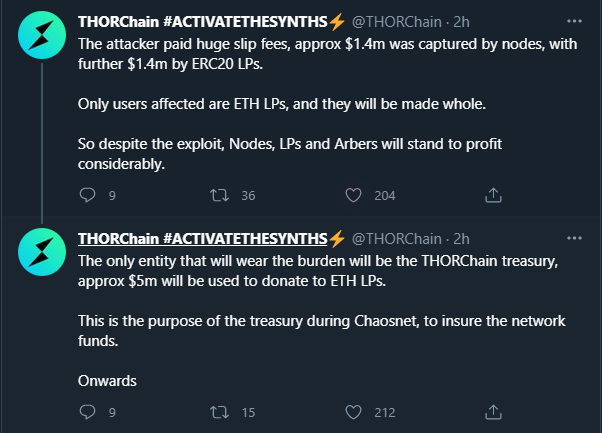 This attack will only make Thorchain more resilient and strong. This is the risk taken by early adopters and when the product is finally finished and rocking they will get the most benefit and gains out of it.

Personally I'm more bullish for RUNE and is the best time to accumulate more. I had some rune but was unable to sell at top, but I'm holding them for more long period as That's how you make the most gains.

Vote for @leofinance as witness by clicking on the below banner if you believe they are bringing value to Hive & Crypto world.

Curation and Education Project for LeoFinance

This post has been voted on by Erarium's Curation Team Our goal is to reward financial content within the Spanish and English community for LeoFinance. We have liked the content you have expressed in this article and we would like to invite you to continue developing material of this type, and to use the #Leofinance tag in order to make the community grow.

We invite you to join the LeoFinance Discord so that we can interact and continue to grow.

Congratulations @khan.dayyanz! You have completed the following achievement on the Hive blockchain and have been rewarded with new badge(s) :