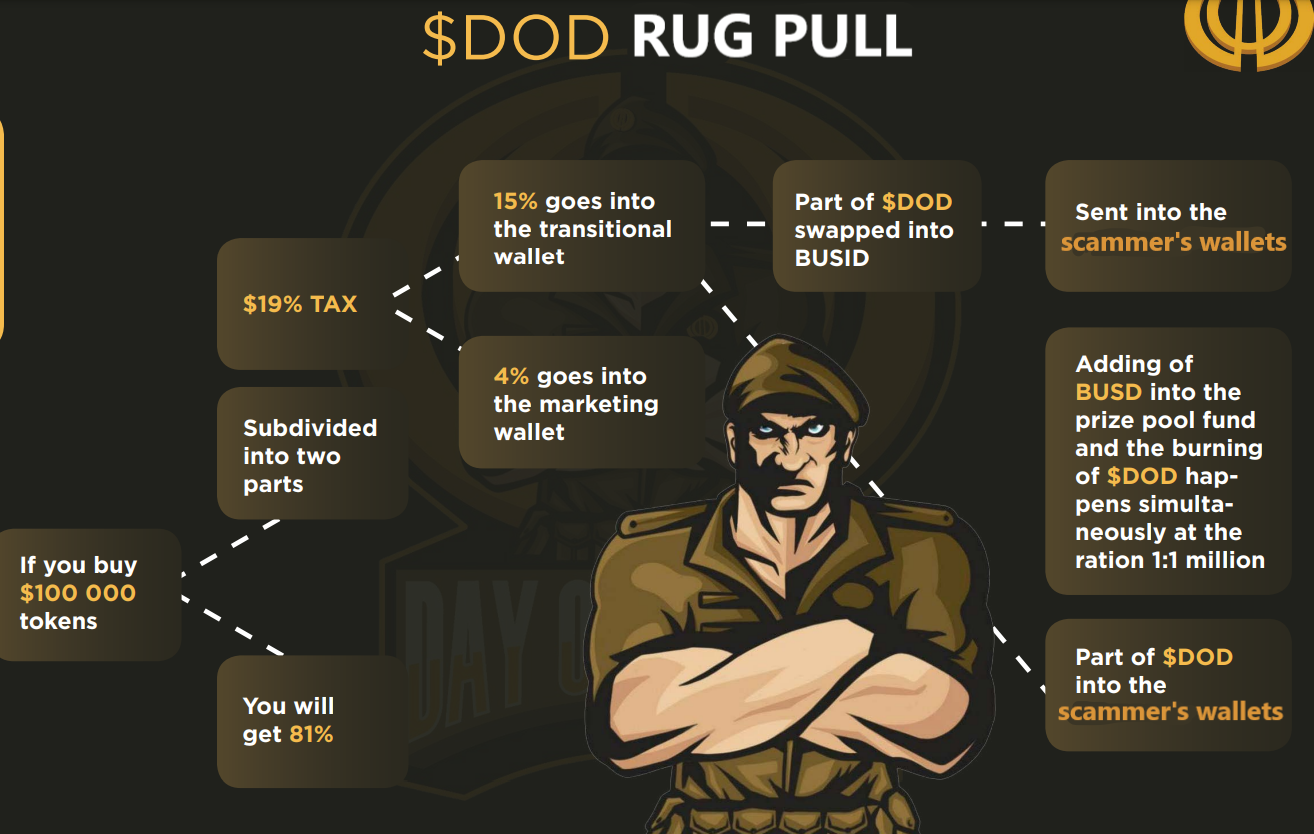 Day of Defeat was a cryptocurrency token built on BNB Chain that raised $1.35 Million and was rug pulled. A self-proclaimed "radical social experiment token" with hilariously-suspect tokenomics. It was "mathematically designed to give holders a 10,000,000X PRICE INCREASE" according to the website. Yes, this is literally the first sentence you read when you were able to visit this piece of dog shit website. Don't worry - the wayback machine has us covered so you'll get to take a peak inside it in a bit.

Before we dive into this absolutely blatant scam, I just have to say... The people that were stupid enough to fall for a guaranteed 10 MILLION X price increase... All deserve it. That's just stupid. Wouldn't everyone be billionaires or even trillionaires if that were even possible? You could have put in $10 and sold your DOD for $100,000,000. Someone dense enough to fall for that really needs to evaluate themselves and their entire life. Anyway - enough bashing those idiots. RIP to their wallets. 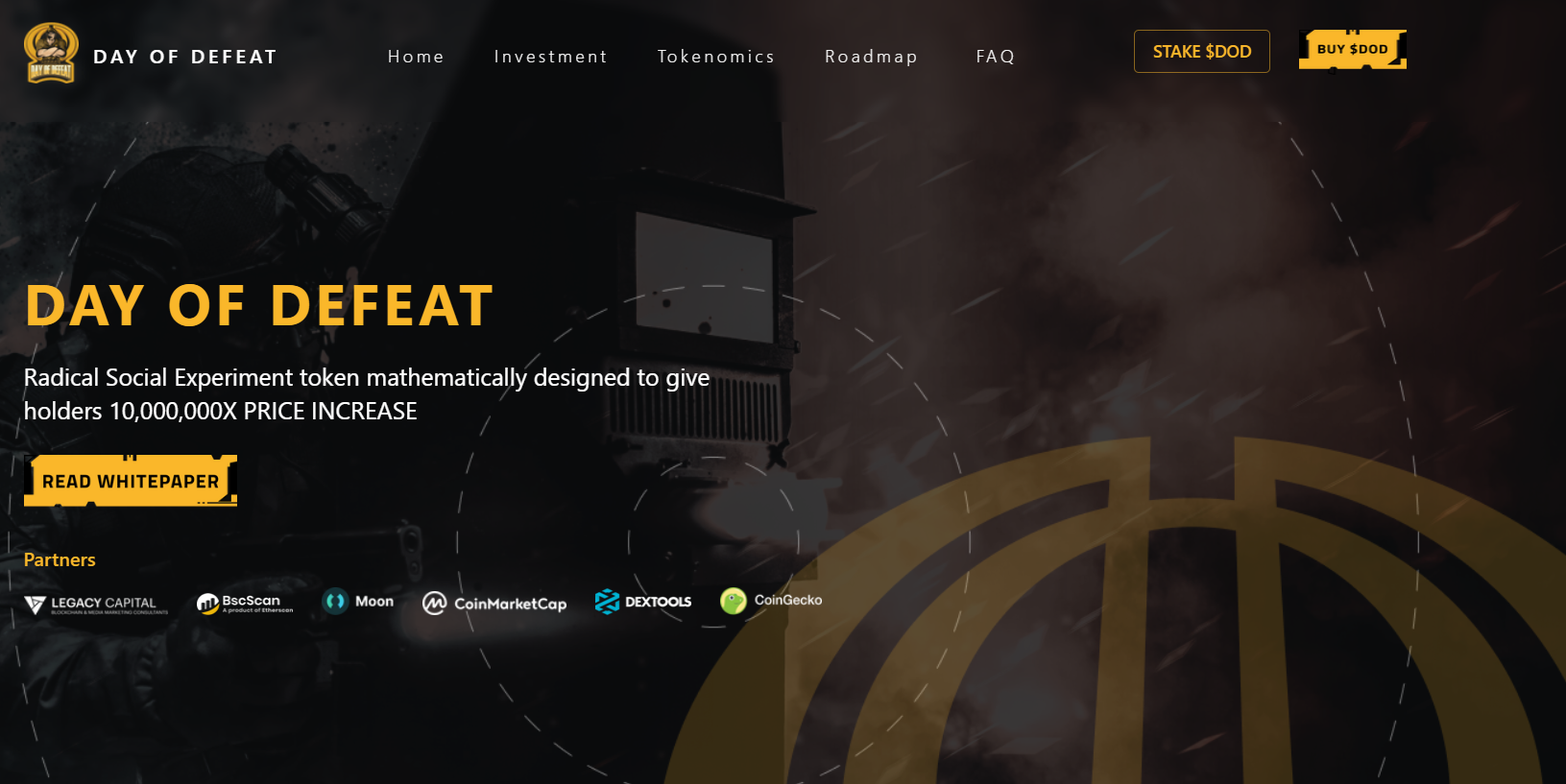 As I said, we are able to explore the now-dead website courtesy of the internet's time machine - the wayback machine. Grab yourself a beer or a blunt for this one. You're gunna need it.

Lesson number one: If you visit a crypto or NFT project and they talk about increasing the price of the token, don't invest. Guaranteed scam.

Lesson number two: If they say the words "we promise" at any point in any context, don't invest. Guaranteed scam. Their FAQ literally says "we promise the team will not redeem the fund pool".

You see, the way this supposed social experiment was going to work was... Every transaction was taxed 19% meaning if you sent $100, the receiving wallet would get $81. Sounds an awful lot like Safemoon or that stupid Squid Game token... man the amount of money people are willing to gamble with out of sheer greed is disgusting.

The 19% tax is split 4% to "marketing" and 15% to "transitional wallet" then to the "prize fund". Everything sent there was supposedly going to be sold for BUSD or BUSID according to their official whitepaper typo. lol. Then when the prize fund hit $100 million, someone would win it. But don't worry, they promised they won't touch it. 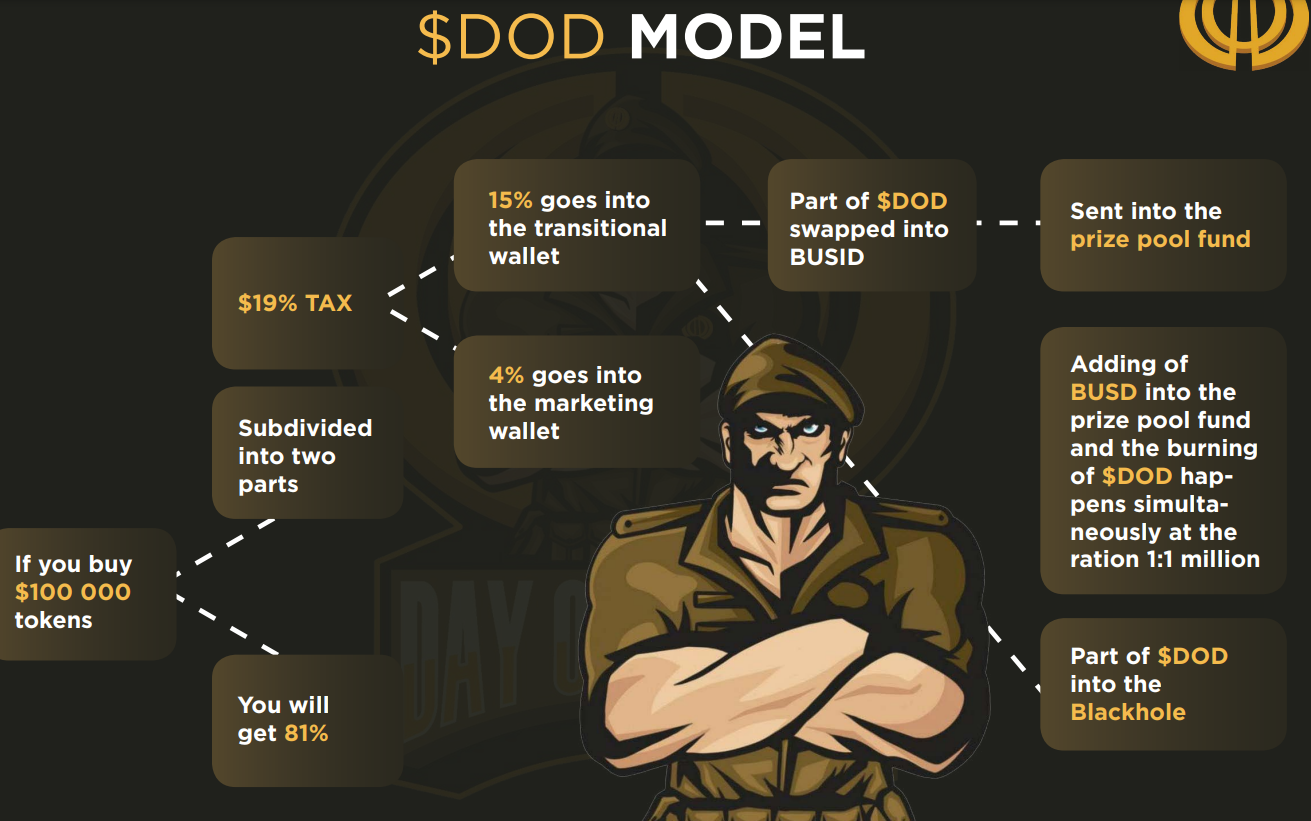 If you're looking at this, trying desperately to find the invest button... Leave lol. I'm making fun of it but this shit is really disgusting. People lost over $1 million due to people exploiting greed. This prize fund would unlock after 99 trillion tokens were burned and only 1 billion remained. I don't really get it but... You see my point.

This shit was whipped up by some genius high schoolers. Or just one guy in his mom's basement. Not judging. Just tryin to imagine the kind of person that came up with this and copy-pasted some Solidity code then started hyping it.

This social experiment was meant to play out until near the end of 2024 according to the roadman, when everyone was billionaires. The final hodlers would get access to the prize fund and everyone rides their golden yachts into the sunset. All of us plebs left here, poor, defeated, and wishing that we had bough day of defeat coin... Hahaha.

I didn't know this thing existed til I saw the CertiK Alert tweet. I read it and immediately said rug pull. In an instant, the token's price fell 96% and CertiK let the community know. It was too late. 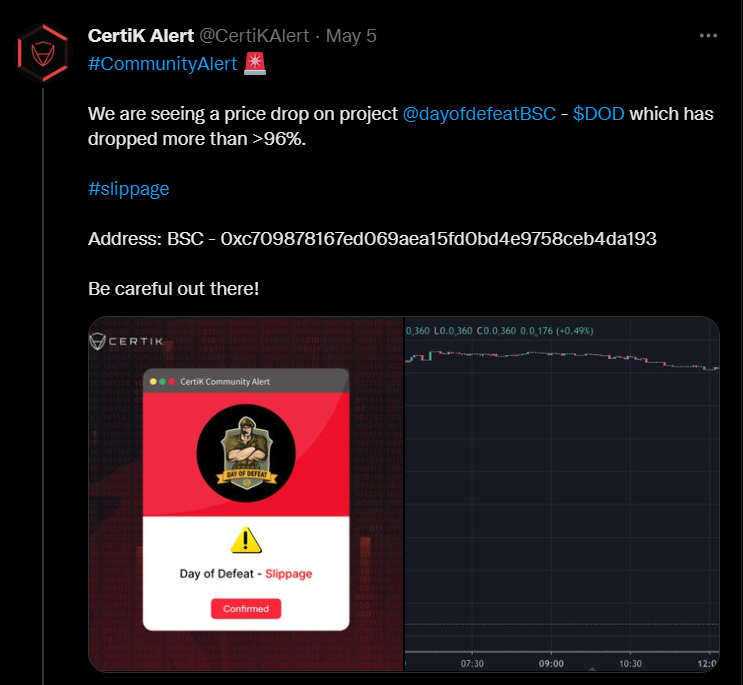 4 addresses received over 100 trillion of the tokens... Wait a minute... I though the max supply was 100 trillion. SUS.

After being swapped for BNB, the funds were distributed to even more hot wallets. These are fresh wallets with one or 2 transactions. So clearly they knew they should at least try to cover their tracks. The funny thing about the blockchain is... Everyone can see it. Everyone can see that those BNB eventually made it to Binance and were cashed out.

The question comes now... Were the accounts KYC'd? If so - it's s direct link back to stolen funds. Those people are not very good criminals. Remember guys, they promised they wouldn't take the money. So how could they?

Shortly after, they tweeted that they were hacked... Hmmm.... 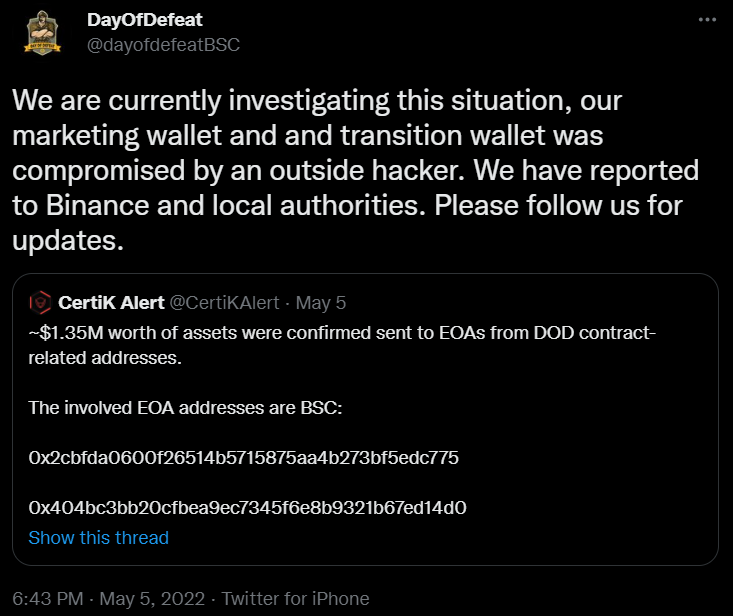 Clearly they are not very good at English. They specified it to be an "outside hacker" and supposedly reported to Binance and local authorities. They didn't bother saying "funds are safe" or anything like that. This is clearly just a cover your ass situation.

Rug pull funds. Make it look like we were hacked. Then yachts. Simple.

Haha excellent takedown - This article should be required reading for crypto newbies!

It should be. Haha

Its so amazing how people keep chasing these. After the first 2 or 3 I was never again. And I was investing $10 a project lol. I just wish people would find hive.

That's the scary part. People are so greedy.

And people fall for it. They want to believe soooooo bad. I think most people that make these projects have no real plan. I like that Khal has proven himself as trustworthy. And hive is just hive. All we need are the people to come. They will save themselves a lot of losses if they do.

Yep, this is why transparency is so important.

Exactly! thanks for your support

It was literally in the name!

Scammers always present. In my mind I cannot get how scammers have the Courage to cheat with impossible promises. But in the other hand neither i can get how innocent (stupid?) could be every investor.

I'll never understand. But that what makes us different from them.

I tend to think it's a rug pull also and not a hack.

This is craaaazzzyy ... yes people are still chasing those really HIGH APYs and throw in hundreds of thousands into it without researching it at all. The only one I actually threw money in was Polycub when BTC/ETH LP was giving out like 3k APY for a very short time and that was purely because we trust the project team way more then these scumsites.

Yep. Blatant scam. That's why I don't feel bad for those that threw money into it.

I am surprised there are no rug pull vigilante groups who make it their mission to hunt down, harass, and make these peoples life a living hell.

Maybe there are. If I was an amateur rug puller I would be fearful.

There definitely should be. I do follow a few people on Twitter that track these things down and expose them. That's about the best we have right now.

Hopefully over time the participants in defi will tighten up there security and standards so it is easier and easier for everyone to recognize a potential rug pull.

greed is major factor in getting scammed especially when it comes to cryptocurrency. 10milx? I don't understand how people fell for this trash.

Someone dense enough to fall for that really needs to evaluate themselves and their entire life.

This is financial advice. lol

Jeez! Just how people fall into such easy-money promises. And the scammers aren't smart either, lol!

Possibly. Those things make people do things without thinking much.

@thecuriousfool 60
about 2 months ago (Edited)

I don't know how to react. I wanna LOL at the same I wanna shake my head in disappointment.

Obviously, they are not investors but are gamblers.

Unfortunately, for us, I am sure this will leave a stain on all crypto regardless if they are legit or not.

Yep. Shit like this gives crypto a bad name even though the same kind of shit happens with fiat.

Who could have seen this coming?
So blindsided…

Nice write-up though! I would say, way too good for this type of shit-scam.

We need to be careful because there's alot of scam site. They promise what they can't redeem

Yeah, just pay attention to what you're throwing money at.

Lesson number one: If you visit a crypto or NFT project and they talk about increasing the price of the token, don't invest. Guaranteed scam

Nah, I think the context matters. This particular project was marketing it as a 10,000,000 X guaranteed token. PolyCUB is marketed as a defi 2.0 yield optimizer, designed to be sustainable over years.

Yay! 🤗
Your content has been boosted with Ecency Points, by @l337m45732.
Use Ecency daily to boost your growth on platform!

Very sad to see this.
I do content writing as a freelancer. Whenever people bring this kind if a project to me to help them write, I always wonder.

Wow. What is the project? Genuinely curious to see what happens with it.

We have to be very careful with the "Rug Pulls" very good your article I was very entertained my friend, blessings brother.

thanks for your support.