Some Thoughts on Apple's Self Repair Program

Apple has announce their Self Service Repair program. Yes, Apple, the biggest tech company in the game that has been against the right to repair longer than any other company. They have said publicly many times that they do not support the right for consumers to repair their own phones and computers. In order to have your device serviced with original Apple parts, you either had to go to Apple directly (nightmare) or go to an "authorized" repair shop. That's finally changing. 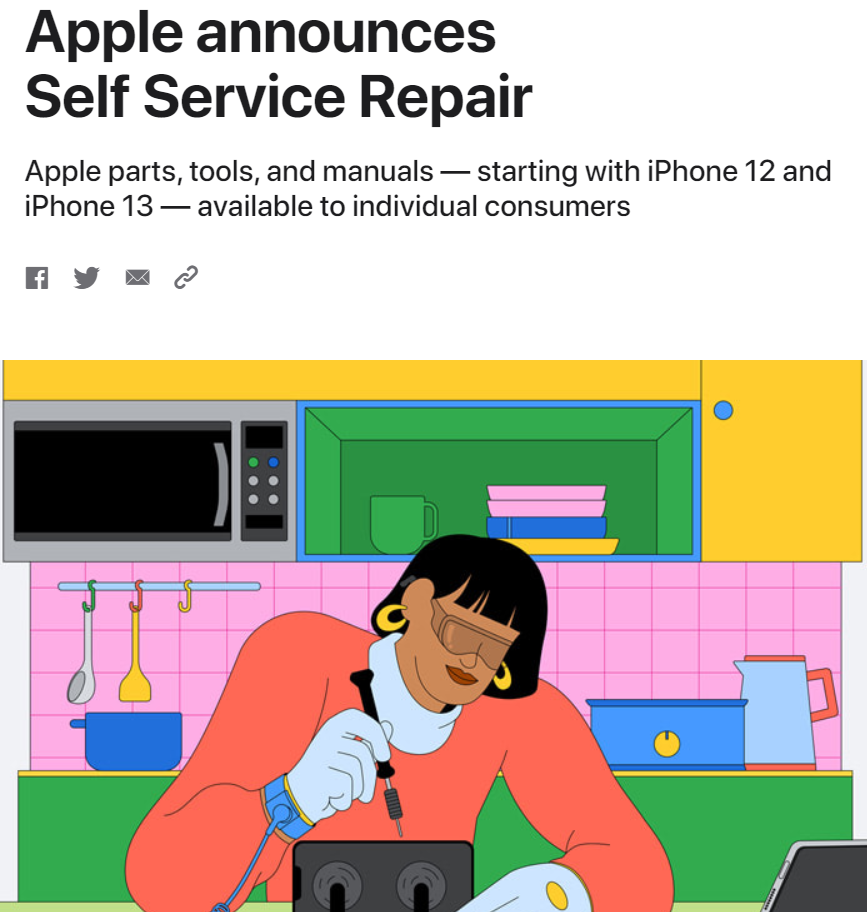 As someone that has been repairing iPhones and other smartphones, tablets, etc... since 2008 this came as quite the surprise. I can't tell you how many shitty aftermarket parts I've dealt with. There's obviously good aftermarket parts, but there's no real in-between really good and really bad. I've used everything from aftermarket screens to aftermarket batteries, home buttons (when those were a thing), and charge ports, etc... More than I can list. They're hit or miss. It's like getting Walmart branded beer. You know it could be good but odds are its really bad.

The initial phase is iPhone 12 and 13 models. Only screen, battery, and cameras. That covers the repairs for about 50% of customers I'd say. From experience, I've done more charge ports than batteries. What do I know, though? Anyway - I think the Self Repair Program is pretty damn awesome. At first I laughed. Then I though about how big of an impact it could have on electronics waste. Apple contributes to a large amount of electronic waste, and a good chunk of that will (hopefully) be reduced by this program. They will be offering credit for returned parts which is pretty awesome. Hopefully it will be enough of an incentive for people to ship their broken screens in.

The iPhone parts will be followed by parts for the new M1 Macbooks. Hopefully soon after that, iPads, and Apple Watches as well. People should have the right to repair anything they purchase. Why do we need to be so wasteful? The pollution levels are already insane - we don't need Apple to keep pushing it. I mean, they already removed charging bricks from boxes so they could sell you more of them in BOXES to reduce waste. lol. I can't believe people still buy their shit. I guess at least they are giving their customer something with this.

Would be cool if they used the Ethereum blockchain to record the amount of waste this eliminates. Maybe allow users to verify the parts on chain? How fuckin cool would that be? I'm sure it would drive value for genuine parts.

As a former 8 year Apple tech, I will say that this could get dangerous, lol. But as long as they have some kind of disclaimer which I am sure they will, makes this an EPIC MOVE!!! The right to repair has been a huge movement and I think Apple is finally sick of dealing with it, lol. I would much rather just get the parts and tools to fix it myself. This is the best move by Apple that I have seen since Tim Cook took over!

Oh, it's every bit of dangerous lol. They'll do some CYA and they'll be fine. More money for them in the end with less liability. I agree, it is their best move since Tim Cook.

A lot of the things that Apple does that seem strange, start to make sense whjen you know the "why" behind them. Take the non user replacable battery for instance. On an Android phone, I'd remove the battery whenever I had to leave my phone in a storage room at work so it would be unusable if someone tried to turn it on or steal it while I was working in another part of the site. Over time, I noticed the battery losing a snug fit with the connector, causing the phone to act up. That's when I realized why Apple wisely fused the battery to the phone to prevent issues like these. Less problems, and a better overall user experience.

There's a reason Steve didn't want the end user tinkering with the device, and preferred having it sent to an Apple repar facility instead.

There may have been a similar reason behind the original repair process. I remember when jailbreaking your iPhone was a thing. My coworker bought a new iPhone back in 2009, jailbroke his perfectly working device, then it stopped working and he began trashing Apple because he fucked up his own phone. They had to send him a new one, and after that, he stopped jailbreaking.

If you mess with it and break it, it's on you.

All of the people that bitched about not being able to repair their iPhones will now be able to. Watch them blame Apple and say iPhones suck if they fuck up their device with an at-home repair. They got what they wanted. Careful what you wish for.

True, but they are always the last to do something (aside from this) and always claim to be the first. Not everyone is gunna rip their battery out every day. It all comes down to the user. You use the device how you want and if you do happen to have the skills necessary, you can do the repair yourself. I'm sure sone people will try and blame Apple for their fuck ups. That's the nature of the game.

It's surprising. At the same time, it's not surprising given that regulators are requiring them to do it. I was expecting more foot dragging. This is good news.

I agree with you. BAck in the 70s, television was passed down from one person to another. Growing up we watch TV on the Console set my grandparents handed down to my parents. Our waste is insane and something has to be done. I fear that money is making the laws and setting the priority.

Unfortunately money will always make the rules. It's just up to the companies who choose to follow them