@lbi-token 74
about 1 month ago
LeoFinance 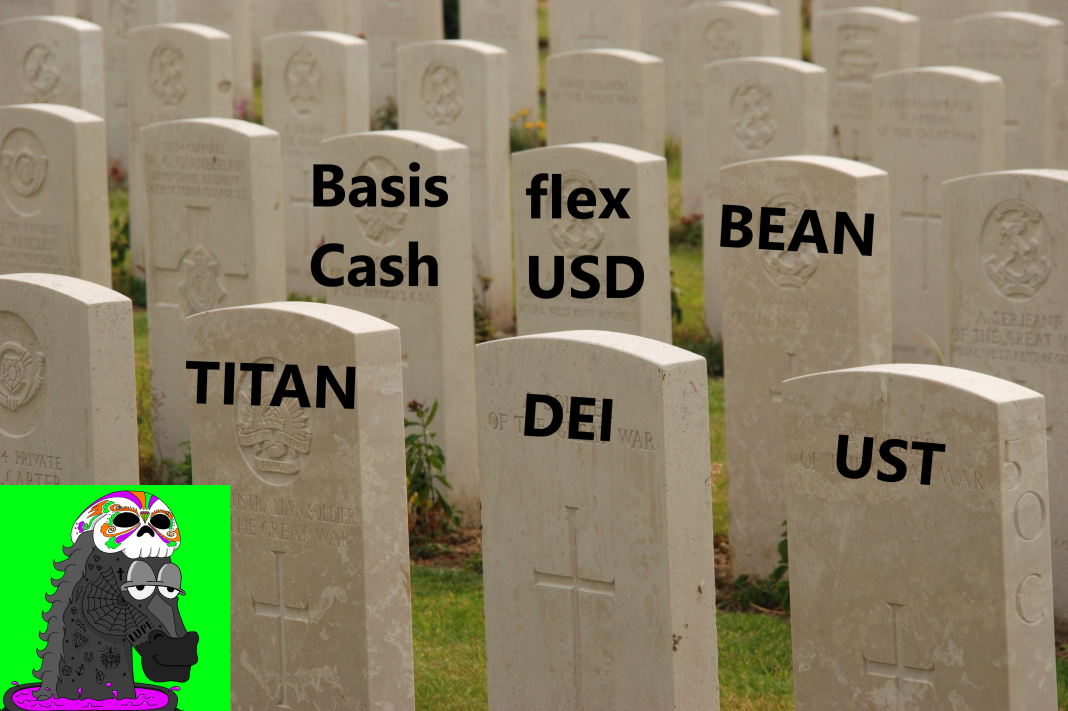 It sounds wild when you think about it.

I came across something on Reddit that I can't seem to find again because I didn't bookmark it. A user had posted in the CryptoCurrency subreddit a like to a website that has compiled a list of failed stable coins. The fact that this list has 22 actual stable coins that have either lost peg or completely collapsed seems kinda dystopian.

These stable coins are cryptocurrencies that maintain their pegs to USD algorithmically. Obviously not all of them are called algorithmic stable coins, even though that's pretty much how all of them work. There have been numerous attempts to create a decentralized alternative to the USD that doesn't require a anything more than code to function.

The ultimate goal is to create a stable cryptocurrency that's immutable. For when you can't handle the market fluctuations, but want to keep your funds easily accessible on the blockchain. Stable coins are going to play a huge part in mass adoption of cryptocurrency. No one can seem to get it right though, aside from centralized parties. 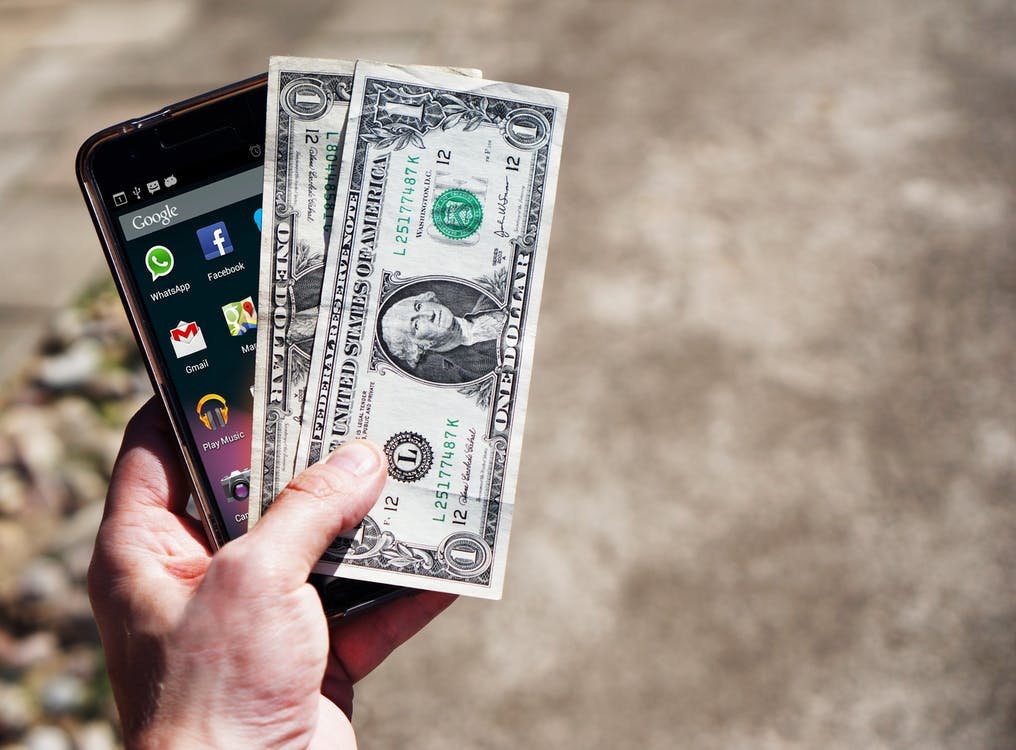 So what are the names of some of these stable coins that just couldn't stand the test of time? Most recently we saw the catastrophic collapse of multi billion dollar stable coin UST, or Terra USD. Once the UST token started to depeg from $1, liquidations started cascading, and ultimately leading the whole platform into a death spiral.

Shortly after, and more recently, we saw the collapse of CoinFlex's stable coin which was offering 18% APR on staking. What they failed to tell users when they were depositing funds was that their deposits to the platform were considered loans... This lead to misuse of customer funds, such as an alleged $47 million loan to Roger Ver, which is currently defaulting.

Another recent victim of the ole death spiral treatment is DEI from Deus Finance. It worked in the exact same way, with an instant mint/burnt function like UST/LUNA. Depeg starts, liquidations cascade, and then death spiral. It's crazy how easy this kind of thing can happen. Really makes you think. 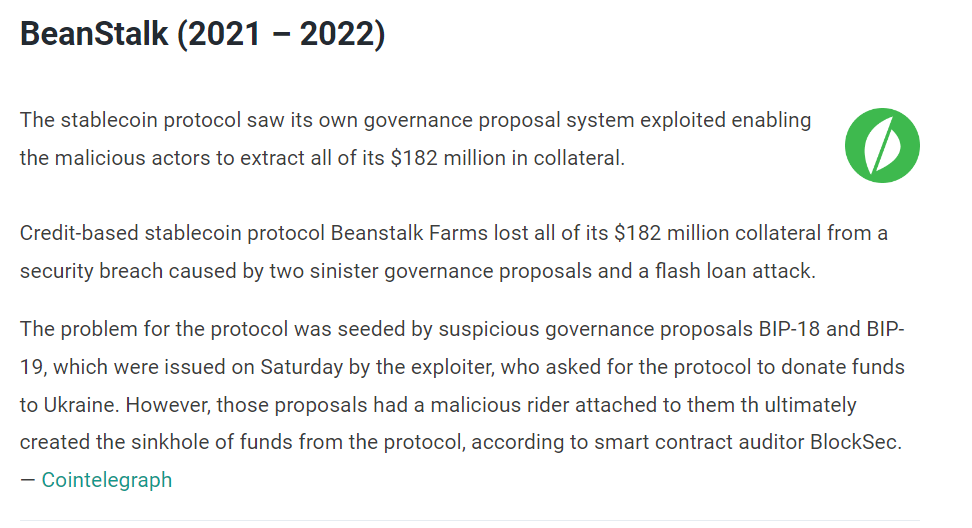 There was even one of these stable coins called BEAN. Friggin' BEAN. Like really people, come on. You thought a token named after one of the most boring foods on the planet was going to be able to survive? We were desperately needing a bear market. People were so blind, and I sincerely hope people's eyes are starting to open.

Reading through this list of failed stable coins is pretty crazy. Just think about the massive amounts of money that has been lost or stolen from users. The sheer volume of money going into these things with no research was insane. Offer high yield, people give you money, you gamble it like a degen and hope note to lose it all. Pay them a small yield like 18% and pocket the profits from gambling.

It's actually a genius business model, and I'm being a little bit harsh I guess. Clearly not all of these were meant to collapse, while I'm sure some of them knew it was possible.

You know which stable coin I'm not worried about though?

HBD is the only algorithmic semi-stable coin that has stood the test of time. Before HBD, the token was called SBD and functioned on similar mechanics. This is why I can say with confidence that HBD is not going to suffer a similar fate. HBD is not the most stable, but that's because it isn't meant to be $1. It's meant to be within 5 cents of $1.

HBD is backed by HIVE, which is mined by content generation. HIVE is backed by a massive amount of content on the blockchain, one of the strongest communities, and a very powerful delegated proof of stake blockchain. Sure there's times where HBD is a little less stable than we want it to be, but the recent birth of pHBD courtesy of the LEO team, it's been much more stable.

Forget other stable coins. HBD is the way.

The stablecoin market is work in progress and I expect a lot of them to fail. HBD is promising though because of the safeguards and I don't think Hive will ever go to zero.

Yeah, HBD is the only one I actually have faith in at this point aside from the DAI stablecoin.

Lmao! Where I’m from beans ain’t a boring food though, boys have been surviving on that since SINCE, Lol. I get your point though!

We were desperately needing a bear market. People were so blind, and I sincerely hope people's eyes are starting to open. — yeah right ! The bear market was needed to cleanse and flush out the not so stable coins off the market .
Hbd will always stand the test of time because day to day hands are always put on deck to make sure it’s peg it’s not ever lost .!

All very true. Beans are important, just so boring lol. This market downturn was necessary for growth.

Issuing stablecoins is a lot of work. HBD appears to have done it well, with safeguards to prevent excessive risk-taking by traders. And they're promising because of their social mission and commitment to transparency, which I don't see in many other stablecoins.

Issuing stablecoins is a lot of work. HBD appears to have done it well, with safeguards to prevent excessive risk-taking by traders. And they're promising because of their social mission and commitment to transparency, which I don't see in many other stablecoins.

HBD has a chance to be a powerful force in the stablecoin market which is going to be, ultimately the foundation for Decentralized Finance (DeFi).

We are seeing a lot of projects starting to focus upon HBD. The key is to start pushing value towards HBD via the utility.

The fact that this list has 22 actual stable coins that have either lost peg or completely collapsed seems kinda dystopian.

It sounds bad when you first read it, but in the world of permissionless money, trial and error is going to play a part.

If you lost money then you don't want to hear this, but these failures have to happen!

Friggin' BEAN. Like really people, come on. You thought a token named after one of the most boring foods on the planet was going to be able to survive?

BEAN is a great example of something that had to happen.

If a stablecoin can be flash loan attacked, it's not going to work.

HBD is the only algorithmic semi-stable coin that has stood the test of time.

Contrary to what the mainstream media may tell you, no algorithmic stablecoins aren't dead.

HBD continues to evolve from the days of SBD and keeps proving that the concept can work.

@ironshield 73
about 1 month ago

With enough hot sauce, beans are anything but boring.

That is totally crazy. Crazy but not surprising I guess if that makes sense. It feels like a lot of times the two things are mutually exclusive.

This is the way 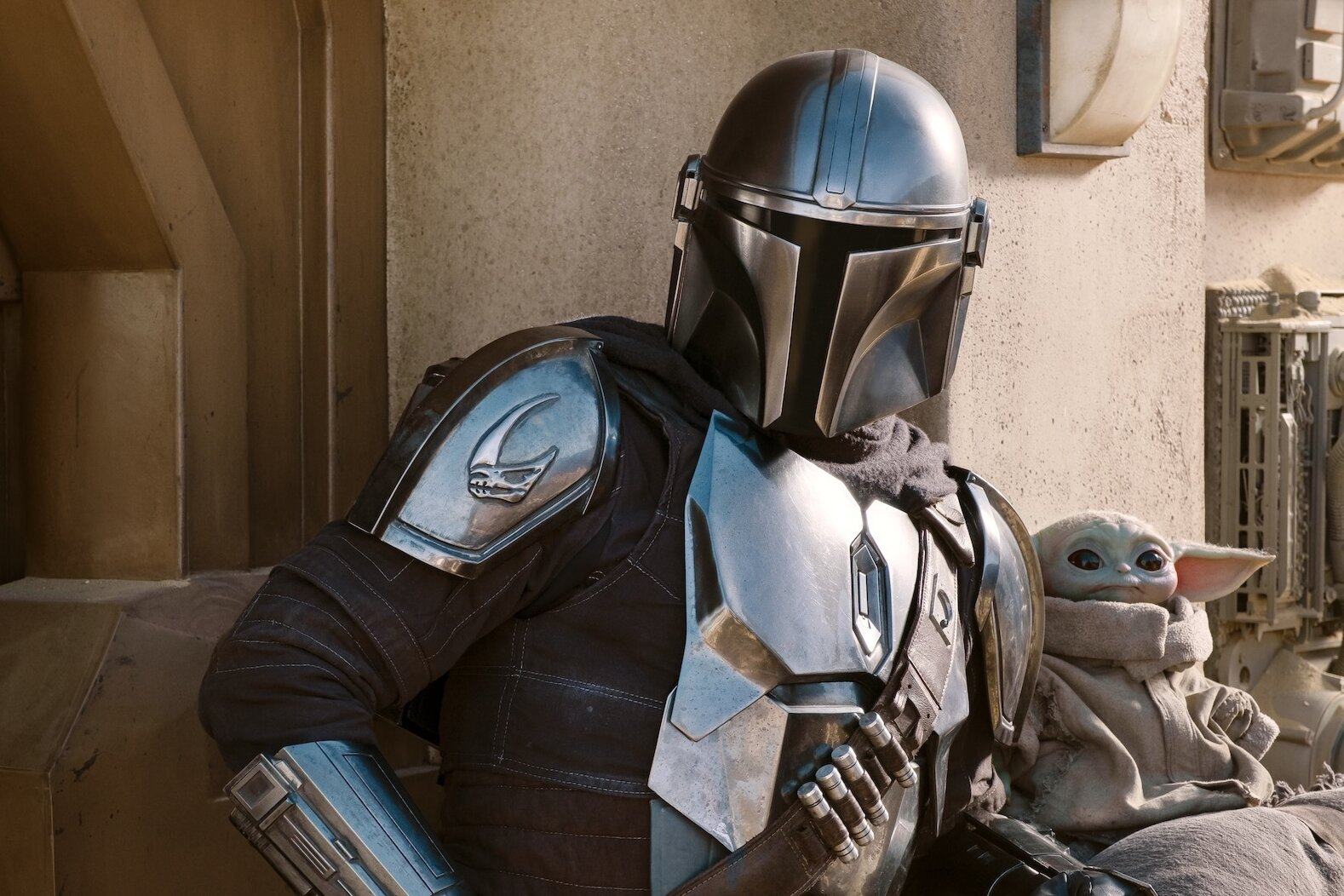