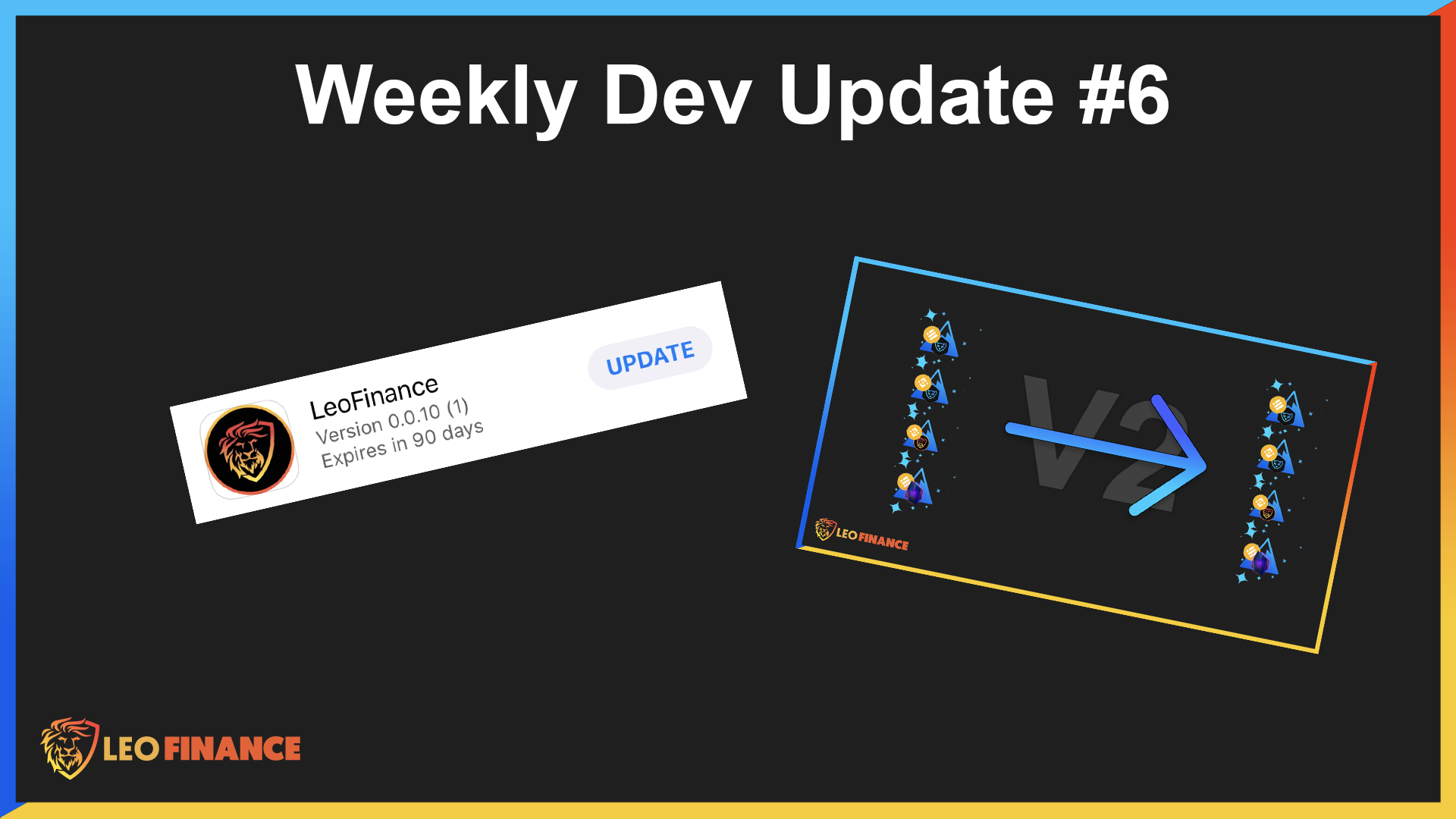 Exciting news this week for the LeoFinance mobile app development. We've done an incredible job so far of deploying new releases, designing the MVP and staying on track for our October 1st release date.

The mobile app has been a long-time in the making. Moving from early framework negotiations spanning more than 6 months ago and then our actual start of development work and iteration design.

The MVP is going to be an incredibly bullish event for LEO. This truly changes the entire game for LeoFinance.

It puts us square in the middle of where we want to be in this blockchain revolution: leading the Web3 community tokenization charge.

The LEO token is the center to the entire LeoFinance project. It's the backbone to everything we do and it captures value from everything we do: from LeoFi to LeoDex to CubFinance.

Version 0.0.10 was just released which marks our 10th major developer release ahead of the MVP product.

In the MVP you'll see many of the core features that you're accustomed to with LeoFinance.io but in the native mobile form factor.

We're already using and testing the mobile app in closed beta and the fluidity and usability of the app is an absolute game changer. I haven't had this much fun reading, interacting with and voting content since our LeoFinance.io UI was originally released.

The app development has been far from smooth but we are making great progress on delivering it and all of the MVP functionalities we've planned for the MVP release on October 1st.

Our goal is to release it on the first of October. Obviously, nothing is guaranteed and we're hoping to see it enter the hands of open beta testers on that day.

The Mobile App is going to radically change the visibility of LeoFinance as we enter a world of referral codes, native app stores and sharing links to real App Store products.

Marketing for the Long-Haul

Our Marketing plans have been coming together lately. There are a lot of different aspects behind turning LeoFinance into more of a media company.

The goal is to release a steady stream of content on all platforms each week with the help of our expanded LeoFinance team and our recent hire of an external marketing team to expand video/audio/text content efforts on social media platforms. YouTube, Podcasting Platforms, Tik Tok and more are all underway!

The LeoFinance podcast is something that we've always thought of as a cornerstone of growing the entire LeoFinance project.

Gaining more users, traction and attention will come from these long-haul forms of content marketing. A wide database of evergreen content for LeoFinance that's all driving value to crypto & finance users.

Earlier this week we released details about IDO #2 & #3. The new IDO system we built uses 100% CUB and the two next IDOs on CUB will utilize this new system.

The other IDO is being done by an external team and will utilize a 100% CUB raise model but with a twist:

This model is an incredible leap forward for CUB and introduces both an instantaneous value prop and a long-term value prop through the Kingdom - which buys and burns CUB autonomously from the IDO token platform rewards.

The above mentioned IDO will release the first in a long series of partner pools that utilize the CUB token. These pools will allow us to create new Kingdoms for CUB and thus, both short-term and long-term autocompounding back into CUB.

This IDO will be the first in a long series of IDOs that have their own farming platforms. Each farming platform will launch with a model like this one. Deposit 100% CUB, 50% of CUB is burned, 50% paired and LP'd, new LP farm released and incentivized.

This marks a major update to CUB's value capture model. We realized shortly after the launch of CubFinance V1 - based on the Goose farming model - that long-term value capture is the path forward to viability and sustainability in the DeFi space. 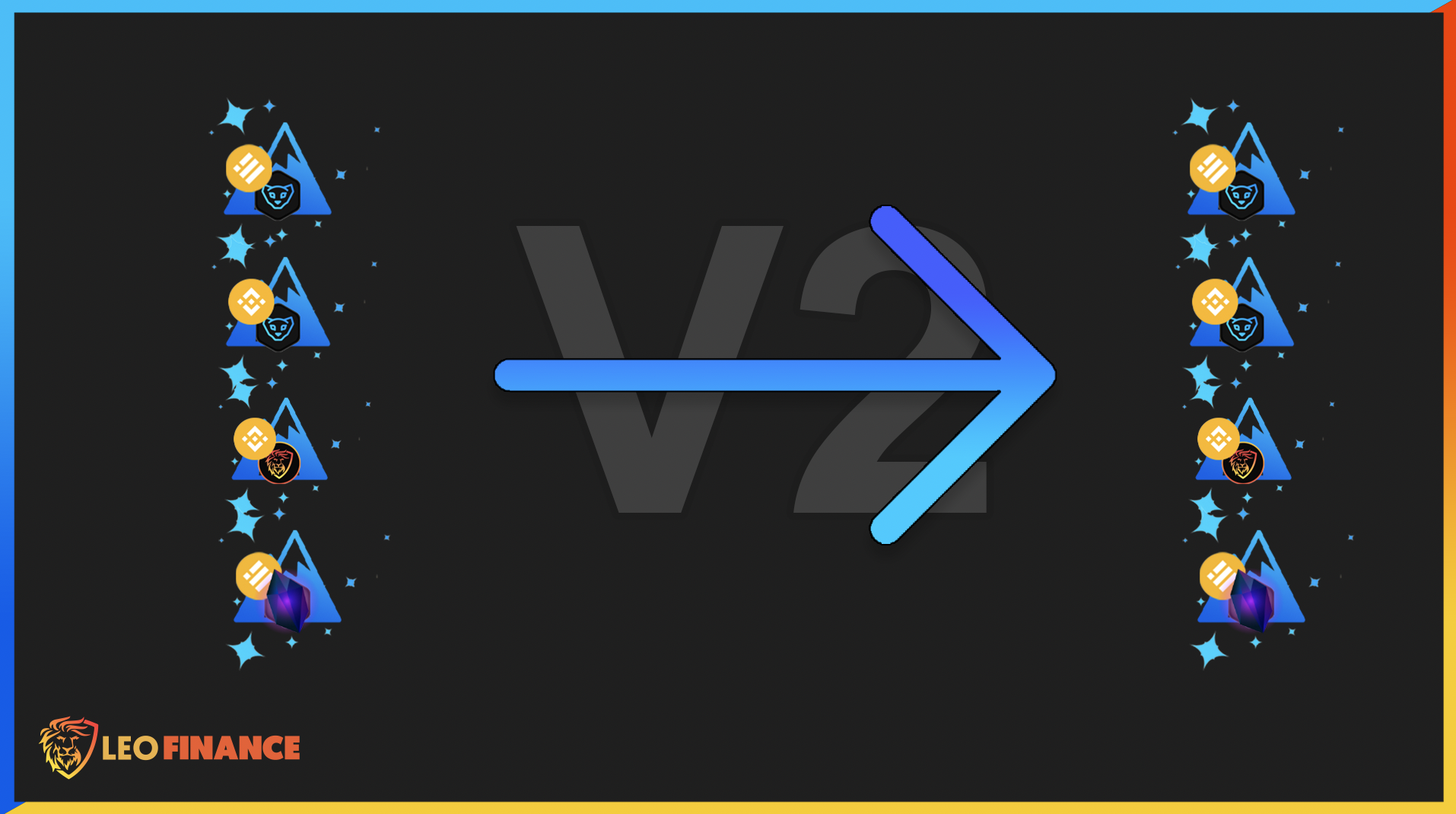 The last @leofinance post dropped a bunch of details about the upcoming change to V2. This migration is important for the future of CUB and many of the long-term mechanisms we're building (such as Kingdoms & IDOs - already built - and vCUB - in progress).

AMA At Noon EST Friday! See you there 🦁

This is a great news. Hope everything goes well!

I'm happy for the leo app.i can't wait to be using it

I’m already using it and loving it! Can’t wait for everyone to join in Open Beta

I can't wait for the mobile app. I'm actually typing this comment on mobile and have said multiple times over the years that Hive desperately needs a mobile app. We will have it. The stuff you guys deliver is what made me a Leofinance addict. Hard to cure that.

Awesome to hear! I’m so excited for the mobile app as well. I used to use an app called Partiko way back in the day and the killer feature for me was notifications and reading/interacting with posts.

The leofinance mobile app is currently in closed testing for our team. I’m typing to you from it right now and I’m excited to unveil it in October :)

I envy you for using it already. I used to use Partiko as well, but not for long. I have a high conviction that the Leofinance one is going to rock.

This is very informative post. Thanks for the update

Thanks for the update man! I'm so busy enjoying this game lol <3 Btw, Im new to this platform and I dont know how to earn that much here. :<

Hey!
Why does the refund take so long to be processed?

Congratulations, let's hope the mobile application works as well as the page has worked so far.

I’m typing to you from the app now, it works great already!

The LEO token is the center to the entire LeoFinance project. It's the backbone to everything we do and it captures value from everything we do: from LeoFi to LeoDex to CubFinance.

Recently I did a post asking the community why the Leo value has decreased and many feel its now like an abandoned project. Is it like the community is not able to envision your work or they feel, now you are more into defi and CUB and Leo is neglected ?

Has the LEO value decreased or is it up 50x in the past 12-18 months but not as high as the all time highs? Some people are just short minded. We’re here for the long-term.

I also don’t know many “abandoned” projects that rapidly hire new talent, build new apps and service/upgrade existing ones. We’ve been building a mobile app for months now and are close to the first open beta release.

To anyone who says this, I say: you’re not paying attention to what’s happening here. Plain and simple. There’s plenty of other cryptos like BTC that you can buy, hodl and never think about again, move toward those if you don’t want any sort of active engagement.