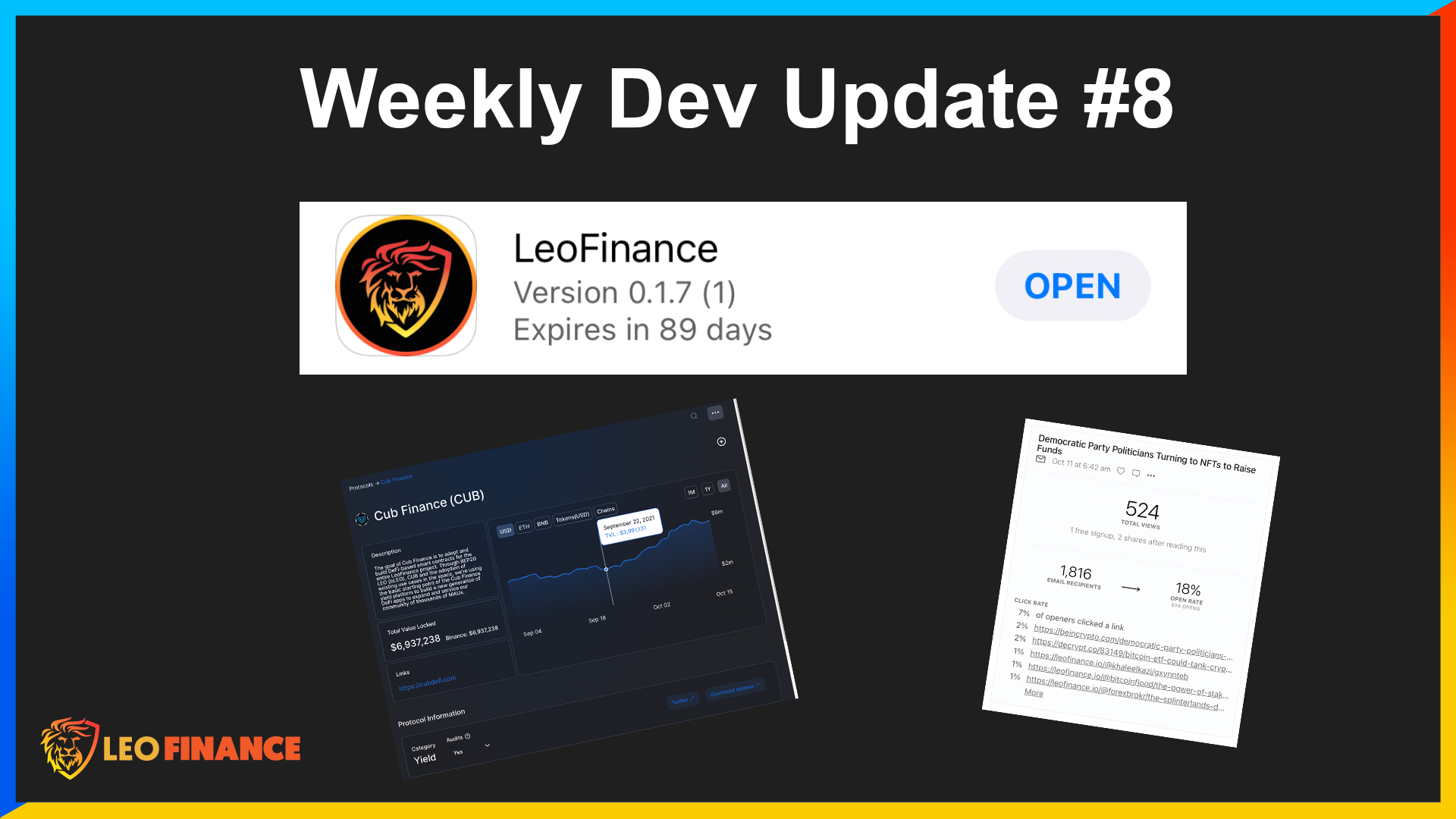 LeoFinance Mobile App development has been moving forward at a lightning pace. We were aiming for the first half of October as the release and we are slightly off target but I'm excited to announce that we're nearly ready to release it - from a feature perspective, everything is ready. Now we're in a final stage of debugging and deploying fixes for major issues (i.e. commenting, upvoting, etc. which as of this week are looking stable).

In the past week, Lightning was successfully integrated into the app. ICYMI: the app was developed using a framework we acquired which sped up our initial development (since we were already in the midst of building for Mobile) quite a lot.

This app will have an incredible UI/UX right at the jump. We managed to speed the whole process up by several months in this acquisition and I'm excited to showcase the first iteration of Open Beta.

Once Open Beta begins, you'll notice frequent updates and we'll also call upon the LEO community to help us bug test and develop a plan to continually improve the app.

There will be buttons to provide feedback and we'll explain the feedback process. It will be an awesome rollout before the end of October and I'm excited to see the community breathe life into the app. I've been enjoying the hell out of it so far and it truly changes the experience of being a member of LeoFinance. Commenting, upvoting and engaging has never been more fun for me.

With the help of our newest team member - Alex - and our marketing team, we've relaunched the LeoFinance podcast.

Our goal with the podcast is quite similar to our original ambition: build a massive library of valuable crypto content. See where the puck is going and be ahead of it in many regards.

Additionally, find and collaborate with guests who are buidling in the crypto industry. There are now thousands of projects building on blockchain/crypto tech.

The mission of LeoFinance is to expand the width and depth of our community. Width means getting more monthly active users on all LeoFinance applications. Depth means creating more engagement for the existing community and providing more utility for LEO/CUB and all of the apps we build.

By reaching out to all these cool guests, we're engaging an entirely new community. Even if that community has 2 people or 10 people or 1,000 people... it doesn't matter. We're getting incredible exposure for our brand and our community and many of these projects either already have traction or we believe have the ability to gain traction in the long-run.

We're skating in front of the puck in many respects. Having podcast episodes and clips with guests who have the potential to grow is - in a selfish way - one of the best methods to grow LeoFinance's reach in the long-term.

We've recorded 4 podcast episodes so far with many more guests lined up each week. The first two episodes went great! I highly encourage you to check them out, share them and if you're up for the challenge: engage with their brand accounts on Twitter and tell them how much you enjoyed their podcast episode with LeoFinance. This does wonders for our own engagement and our collaborative strength with these external crypto communities.

The Daily LEO Newsletter is yet another incredible engagement tool for our brand and community. @taskmaster4450 took up the reins of writing for the newsletter every Monday and Friday.

Since he took it over and brought consistency to the release of new articles straight to the inbox of 1800+ newsletter subscribers, we've seen some explosive growth.

Every day there are new users signing up to the DailyLEO. 99-100% of these signups come directly from LeoFinance.io (through the little newsletter popup window we have in the bottom left when new visitors land on the UI).

The first DailyLEO Newsletter Taskmaster did: 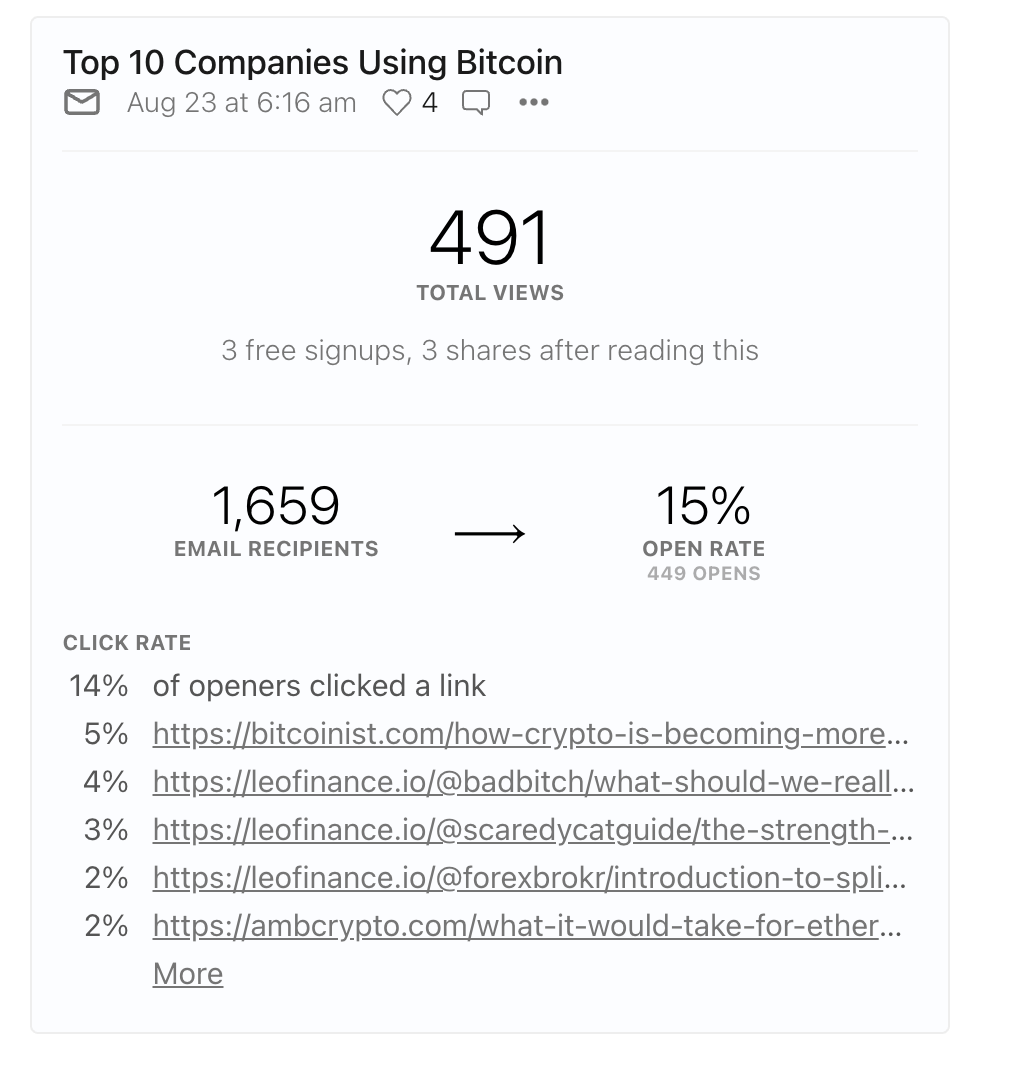 The most recent newsletter on Monday of this week: 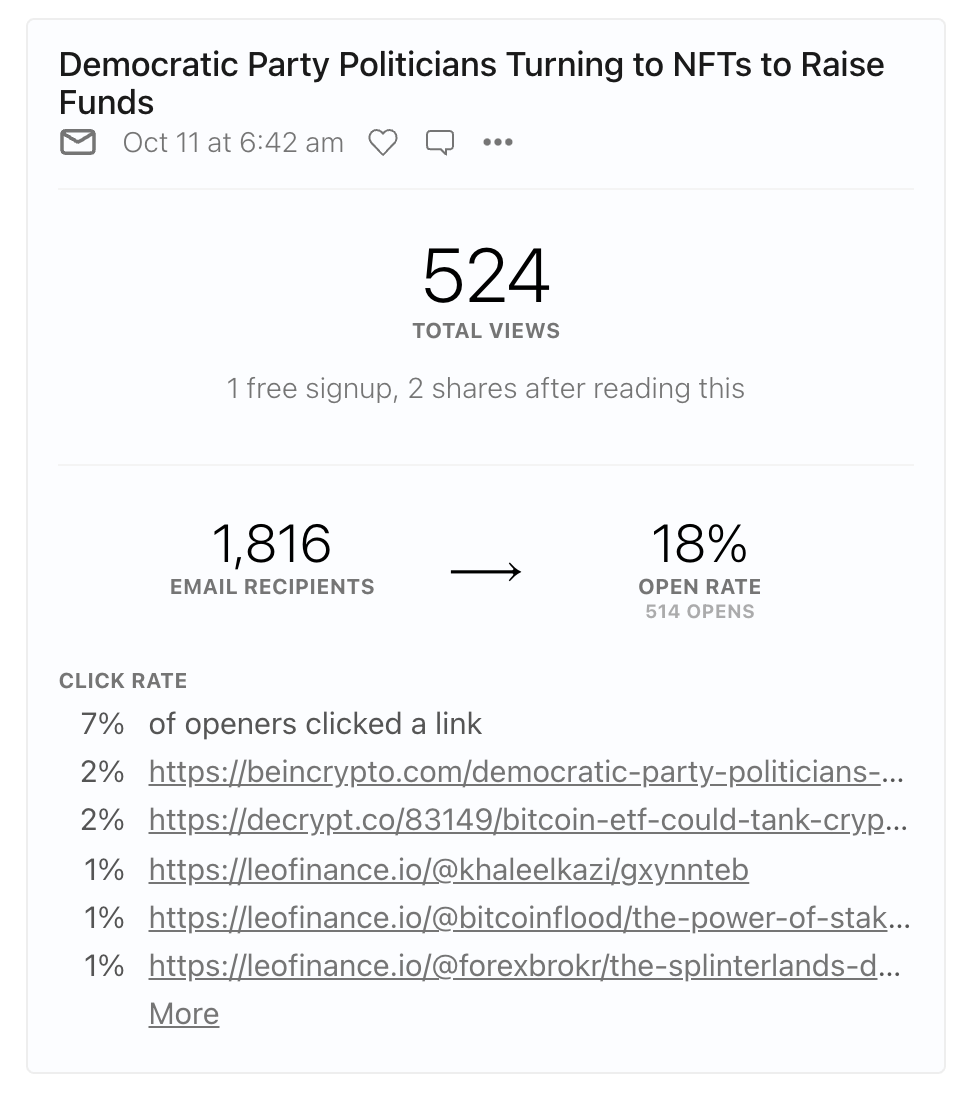 It's awesome to see the newsletter grow and while the numbers may seem small, they are actually quite large relative to the size of LeoFinance. We're continually growing in these key metrics, and growth is what we're after.

This is a nice path into spotlighting two community members who have been doing amazing work for the community. Support them in any way you can and let them know that you appreciate their hard work:

CUB is heating up for a massive run at the end of October. We're in the final stages of releasing Polygon CUB. This project on the Polygon network has a number of massive overhauls we made to it over the past 1-4 weeks.

These changes will drastically change the tokenomics and overall success of Polygon CUB on its own and we believe they'll have a massively positive effect on CUB.

To drive many of these changes, we drew some inspiration from other projects who have seen recent success. Among them are OHM and their olympus DAO model, SPS (Splinterlands), Curve and a few others.

The release of this new platform will change CUB forever.

Kingdoms TVL on a Rocket Trajectory: 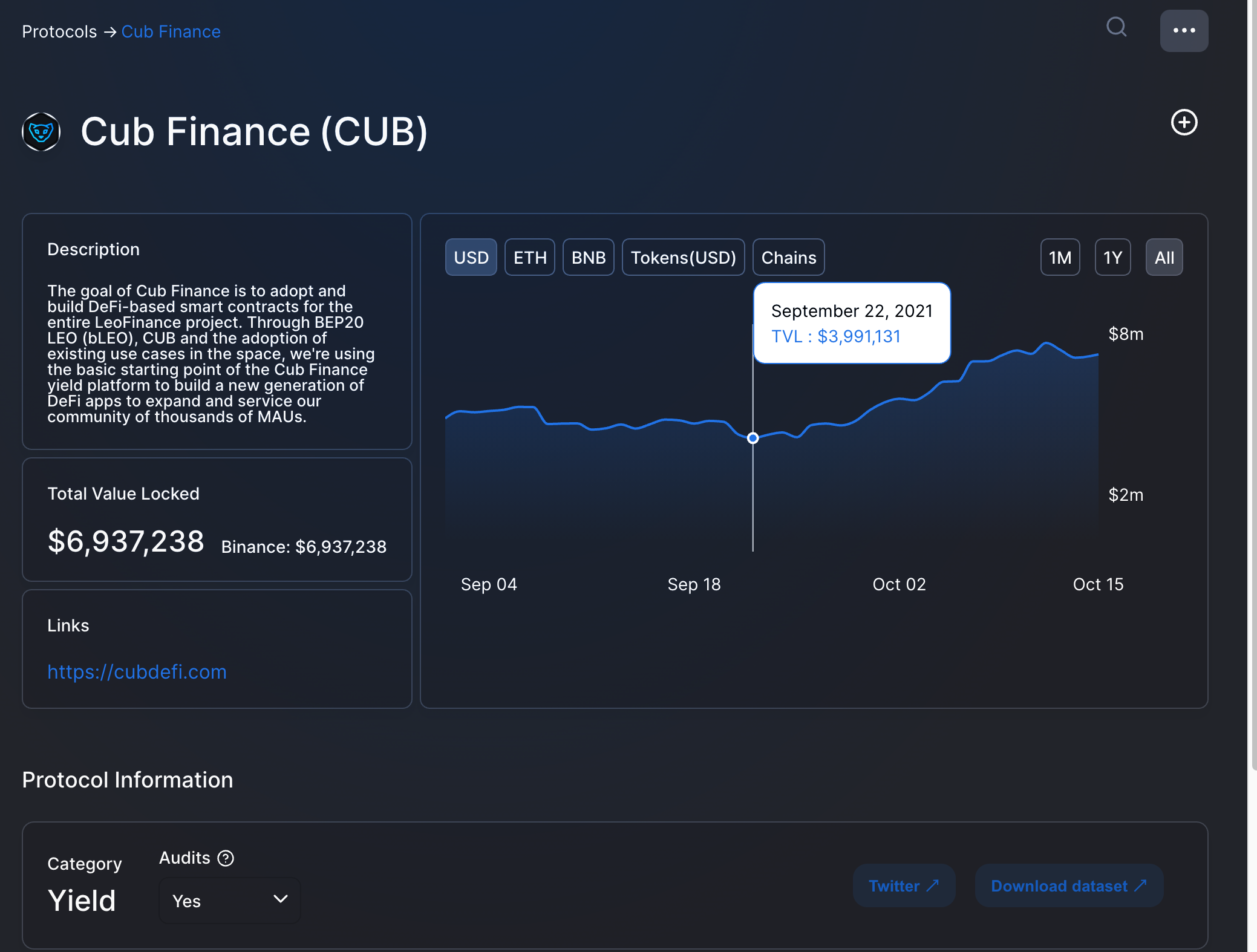 The TVL on Kingdoms has been skyrocketing over the past week. As mentioned above, we believe this has a lot to do with the work that @notak has been doing for CubFinance. Getting us listed on all sorts of tracking apps and major platforms like:

@notak has recently released a post talking about the dapp.com listing and how YOU can get involved and generate more external awareness for CubFinance:

Hi there! I'd really like to talk about what you're up to with Lightning and synergies with my @V4vapp and Podcasting 2.0!

I'd love to see your app because I think it could have some amazing opportunities for combination with podcasting 2.0.

You just want to get it early under the guise of some development mumbo-jumbo. 😁

We see how you are.

Converge as much together as possible to leverage what is already produced.

This is how it all keeps growing.

A good update. It sucks waiting for development, especially when we are here on a daily basis.

That said, waiting a few weeks is not the end of the world although it is like watching paint dry. Hopefully we will see much of what you mentioned come out this month (it is half over).

Keep up the good work (just be quicker about it).

Actual footage of me at work

Remember, Buffett talks about the market excelling at taking money from the impatient and giving it to the patient.

This is the situation with both CUB and LEO.

It takes time to build things. We are attacking it from many different avenues. This is something that will help going forward.

Plus, I will be putting together a post about something new for those who want LEO to excel to participate in.

This app will have an incredible UI/UX right at the jump.

I remember the early days of the new Leofinance interface and testing testings. Let the testing begin for the new app(excited)

Great to hear how the mobile app will encourage and enable the community to participate in the development.

These are great update from a financial social media platform.

The multi streams of income associated with leofinance is an amazing thing. First, the initiative of dailyleo (Leo newsletter) has helped so many in areas of read news, digest it, and give quality comment.

Spreading from Hive Blockchain to DeFi world on binance smart chain through Cub DeFi is phenomenal. It has opened multi opportunities for crypto holders to earn passively, indeed, leofinance is a finance social media platform with innovative team behind it.

Excepting to see the mobile app soon which coming with lighting network.

If @taskmaster4450 takes a one week from Leofinance, we're screwed in terms of engagement. I probably have to start digging through the platform more so I can make new friends and engage more. I used to be more energic :D. Can't wait for the mobile app.

Interested to see what kind of lightning integration you have cooked up!

developments like this make me realize how mature Hive got in the last years. It is amazing to see how the community grew and took care of the blockchain! Great job with the lighting integration and good luck further!

It is quite an eye-catching application and a wonderful idea. The expansion of the community through the applications proposed by the LeoFinance company are really an alternative for millions of people who want to learn more about the world of cryptocurrencies.

Glad to hear this info
because after all the mobile application will encourage and enable the community to participate in development.
this platform will be the best

I'm already looking forward to the day the app comes out.

I wonder if it will have a translator for those who are not native English speakers.

im always on my phone ! im ready i cant wait! i need this! im loving it on my laptop so far . thanks for the update

Thanks for the mention @Khaleelkazi. Super stoked to be making a small contribution to the growth of Leo Finance. The podcast is gaining momentum :)

I can't wait to see get a hold of the mobile application. Judging from what the team has done with the entire Leofinance front end I bet the app is going to be extraordinary.

Also, this will increase engagement a lot.