Non-Blockchain Based Decentralized Social Media Is Not The Answer

As I was on Twitter today I ran across some people unfamiliar with decentralized social media platforms who were upset by Elon Musk purchasing Twitter. They were looking for alternatives to Twitter.

Mastodon was brought up. Shortly and simply put, Mastodon is a decentralized social network where the users can use a single account to access a number of "federated" servers that are interoperable. Any user can set up their own server or use someone else's server. Each server owner decides their own moderation policy.

Here's what Mastodon has to say about itself: 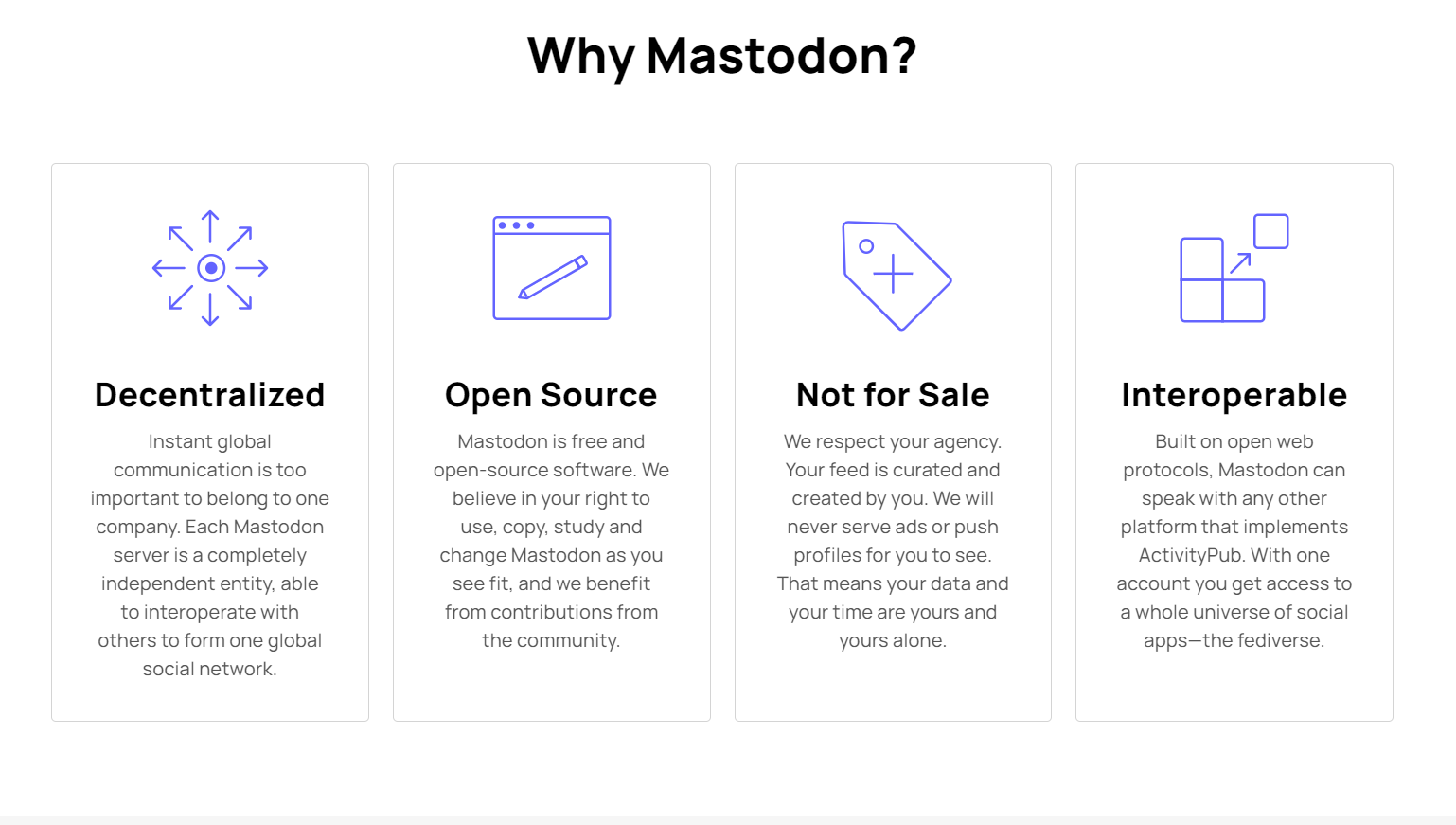 Ok, no ads. How is this thing funded? Naturally, each owner of a Mastodon server pays the cost of running that server. All the software is open source.

Problem is running a popular server costs a lot of money. Hosting all the images, audio and video is not cheap if a server has millions of users. In fact, 60% of the users of Mastodon use one of three servers located in Japan [1].

Coughing up something like $1000 a month to pay towards running a server is something few regular people would be willing to do.

Development is not free, either. Not surprisingly, Mastodon is developed with money provided by corporate sponsors. 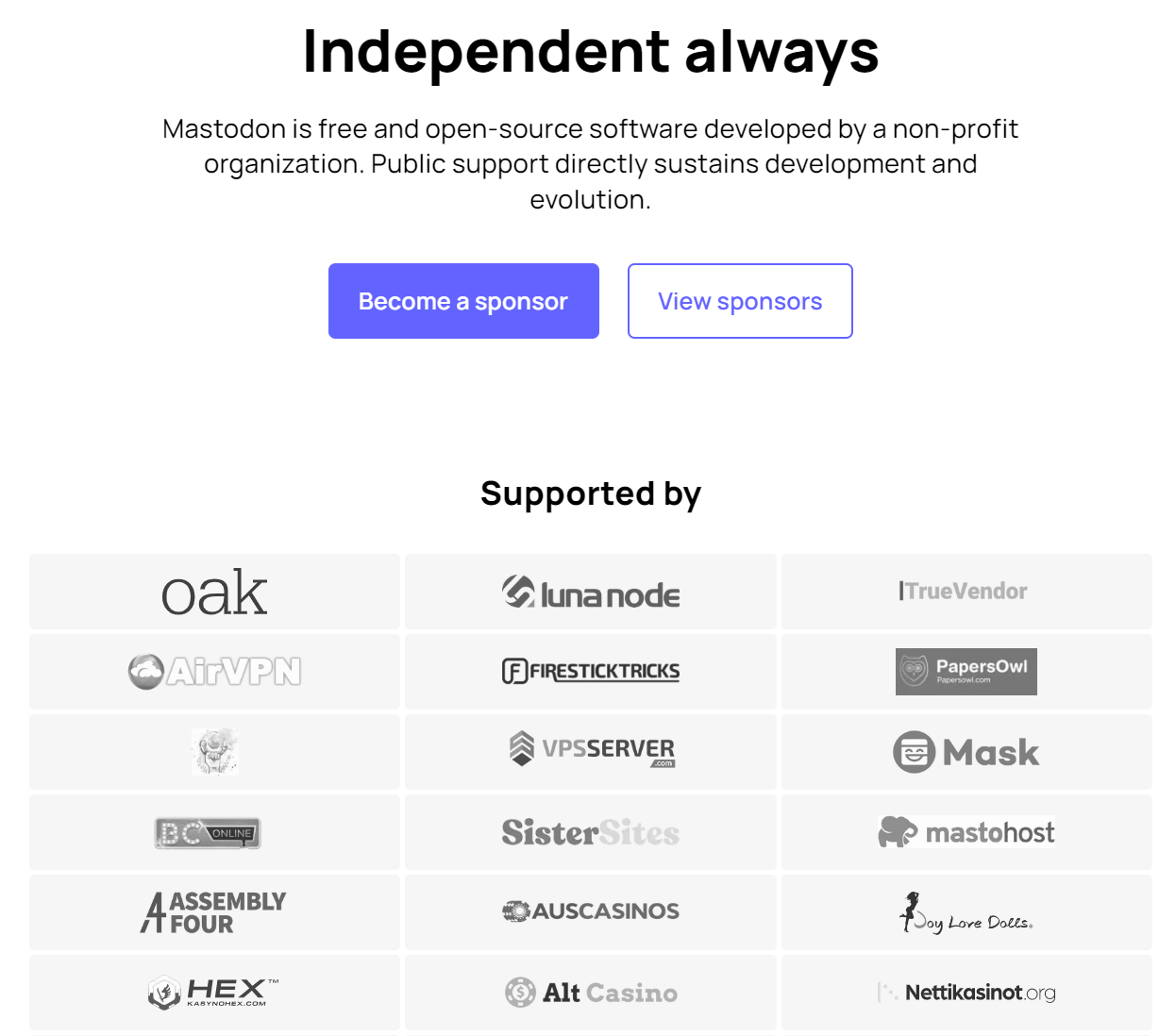 There is a legal entity, a German non-profit limited liability corporation, Mastodon gGmbH, responsible for the development of Mastodon.

I think celebrating Elon Musk's acquisition of Twitter is misguided particularly because Musk is making Twitter a private corporation with even less scrutiny than it had when it was a public company. Frankly speaking, with Elon Musk as its dictator, Twitter is starting to look even less attractive than it already was. I don't care if Musk says he's pro free speech. Musk is just one man with his own biases.

Mastodon is certainly much better than any centrally owned and controlled Web 2.0 social media platform. But the problem is that it is relatively centralized in practice and there's only so much that can be accomplished within the framework of the fiat economy.

It is difficult to scale volunteer efforts and Mastodon is certainly not relying on a volunteer work force alone.

All roads seem to lead to Hive eventually. There has been a tremendous increase in the number of people aware of the problem of centralized corporate controlled social media. Only a few years ago, people would look at me as if I had two heads when I brought the topic up. Today, we have normies discussing alternatives.

We are going to see more attention given to what passes for Web 3 in the crypto space and elsewhere. Centralized and VC funded Web 2.5 projects in the crypto space will attract unwanted attention from regulators. Non-crypto based alternatives will struggle to grow without generous corporate or individual sponsors with their own agendae.

Tokenization won't solve anything by itself. But it will solve a lot of these problems as long as the token distribution is decentralized enough.

Elon Musk taking the company private has 'suspicious' written all over it. Yes it's best to build in private but the company has been a public company for awhile. Taking it private will attract more scrutiny.

All roads indeed lead to Hive!!

No, public companies are scrutinized more closely than private ones, which is a good thing in this case.

I guess. Being private has its advantages when it comes to scrutiny. But Twitter is a massive company already.

I've come to the same conclusion: Mastodon is not the answer.

Mastodon servers are nothing more than lots of little Twitters.

Without the ability to truly own your account, you will never have true censorship-resistance.

All roads lead to Hive!

PS. I found this way outside the 7 day reward window, so just sent my 30% upvote value as a tip.

Keep up the great work!