Of Sunrise, Mountain Views, Mediterranean Sea and Sunsets in Andalusia

When the clouds are thick and the sun is just about to rise below these clouds, it´s guaranteed that the sky will be orange to red as if depicting the sky is burning. But when the sky is perfectly clear blue, then the sun appears to be very huge.

Today, I will be showing you Torrox surroundings and the beauty of everything nature in the rural Andalusia. You might be wondering why Andalusia is sometimes written as Andalucia.? The latter is the Spanish word derived from the Arabic word Al-Andalus coined during the Islamic Golden Age, when the Iberian Peninsula was ruled by the Muslims.

Because of its proximity to North Africa, Andalusia´s culture is predominantly arabic because it had been ruled by the Arabs and North African Muslims for 700 hundred years.

Andalusia's hinterland is the hottest area of Europe, with cities like Córdoba and Seville averaging above 36 °C (97 °F) in summer high temperatures. Late evening temperatures can sometimes stay around 35 °C (95 °F) until close to midnight and daytime highs of over 40 °C (104 °F) are common. Seville also has the highest average annual temperature in mainland Spain and mainland Europe (19.2 °C, 66.6 °F), closely followed by Almería (19.1 °C, 66.4 °F).[19]

We live up on the mountain during wintertime and we are able to witness various natural transformation of the skies or witness devastation of what the gusty winds could cause in the surroundings. We can watch the sunrise right from the windows of the dining room. The sunrise varies daily according to the status of the sky towards the neighboring town of Nerja, where the sun begins to ascend from the Eastern part of Andalusia. 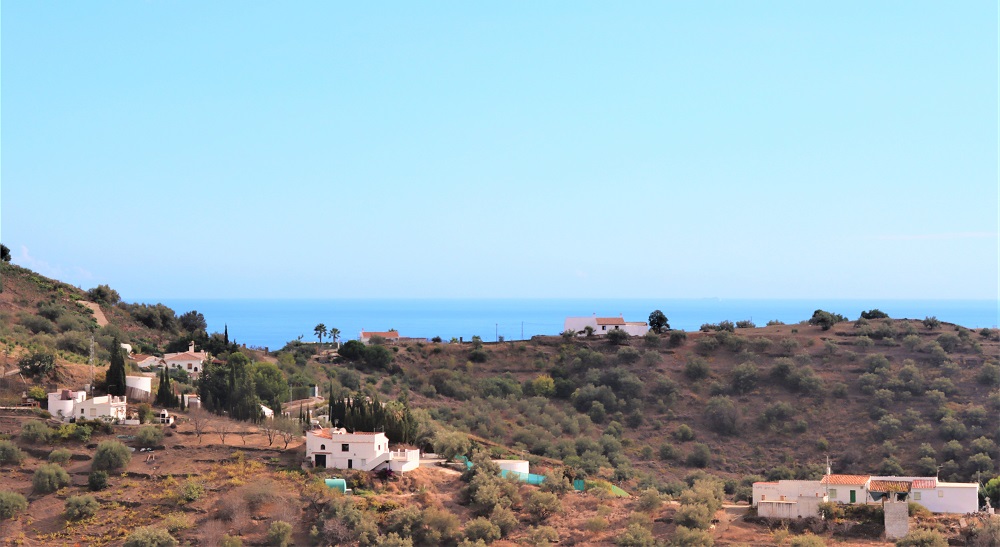 When the sky is clear, one can see its blue reflection on the Mediterranean Sea and it´s always fascinating to see huge cruise liners or cargo vessels from Malaga on the way to various ports in Europe. 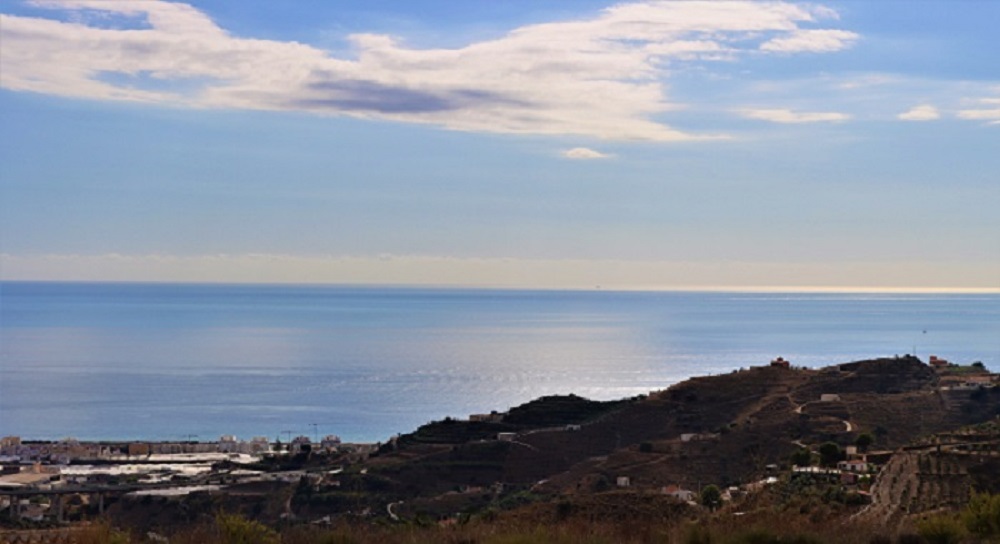 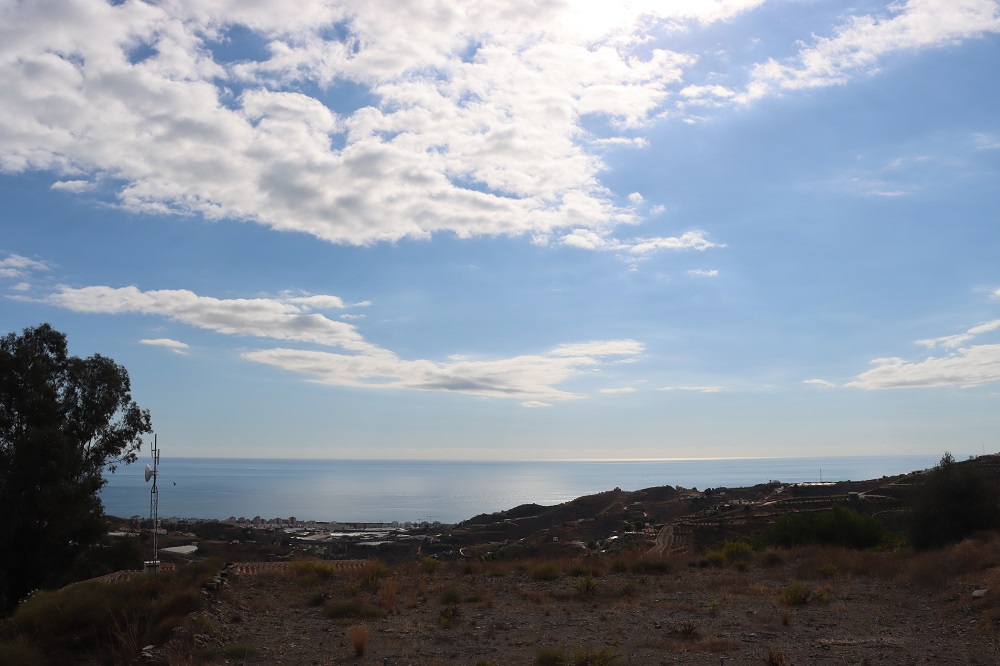 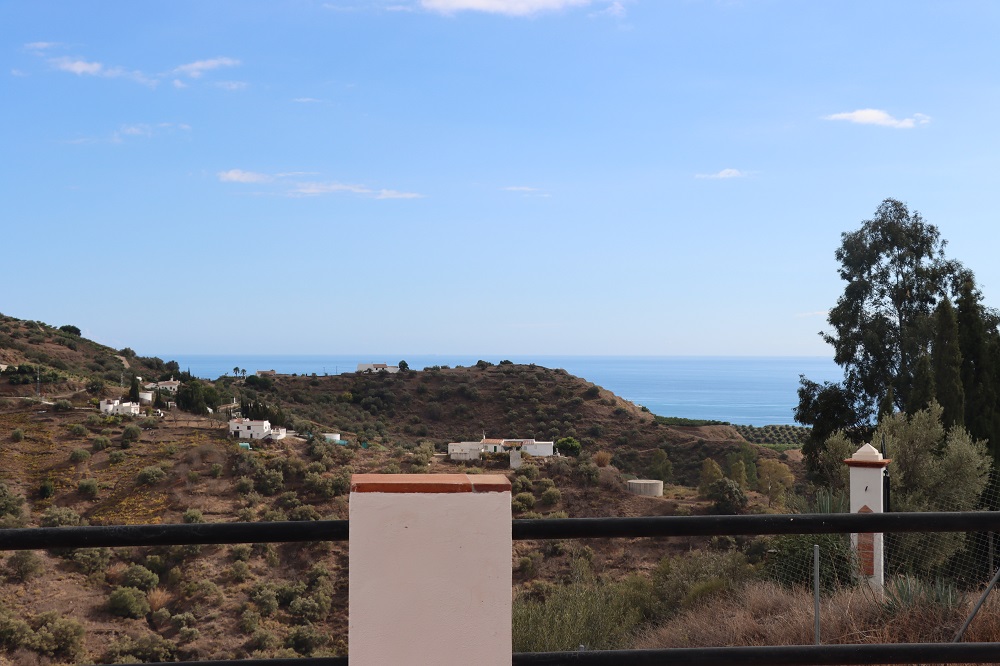 We have a 360° view of the surroundings which includes olive groves, mango and avocado plantations... the sun rises from the East between the two houses (below picture) goes slowly to the South and later at the end of the day to the West. 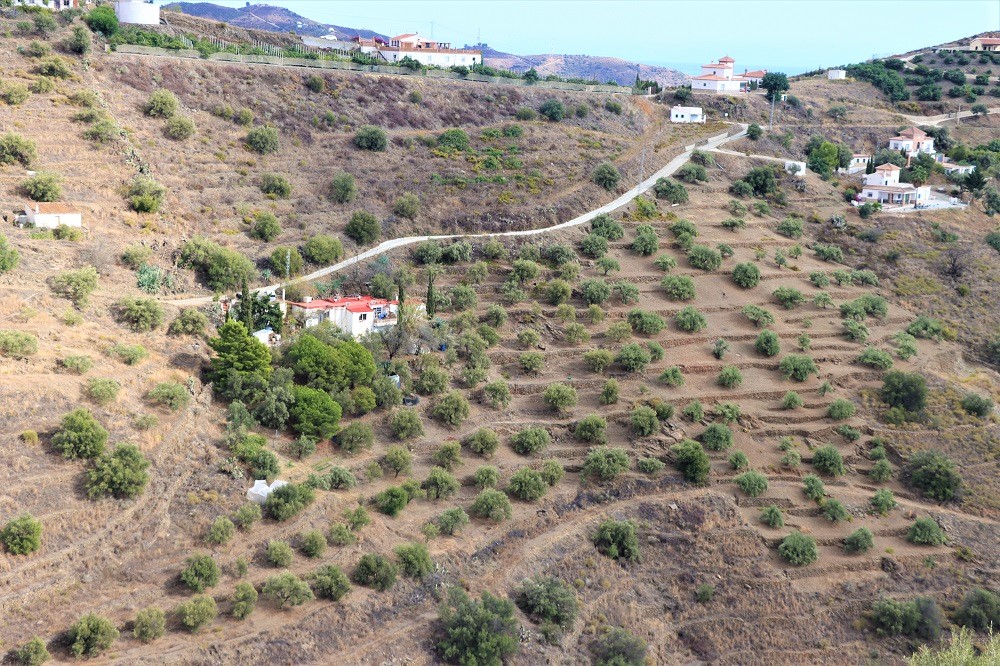 In the old days, the elder locals planted olives because the trees did not need watering, until now this had been a tradition for every family who owned land in the campo (rural area) to cultivate olives. The whole family joined forces to harvest the stone fruits. 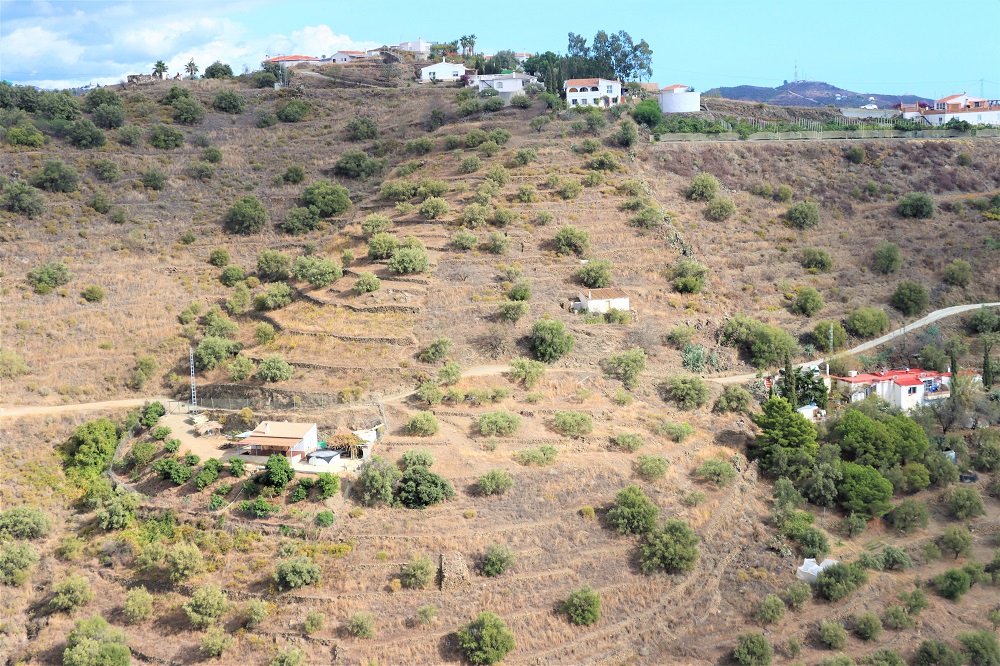 Then once harvested, they bring it to the local cooperative to have them pressed cold. Around 6 Kgs - 7 Kgs of olives are needed to press 1 Liter of the oil. There are so much work involved in the harvesting, the farmer harvest manually. They would spread a huge net around the tress and they let the olives fall down, others have so me stick to tap the branches so they simply fall down. At the end of the day, they gather them mostly in a 20kg plastic boxes then bring this for local pressing. 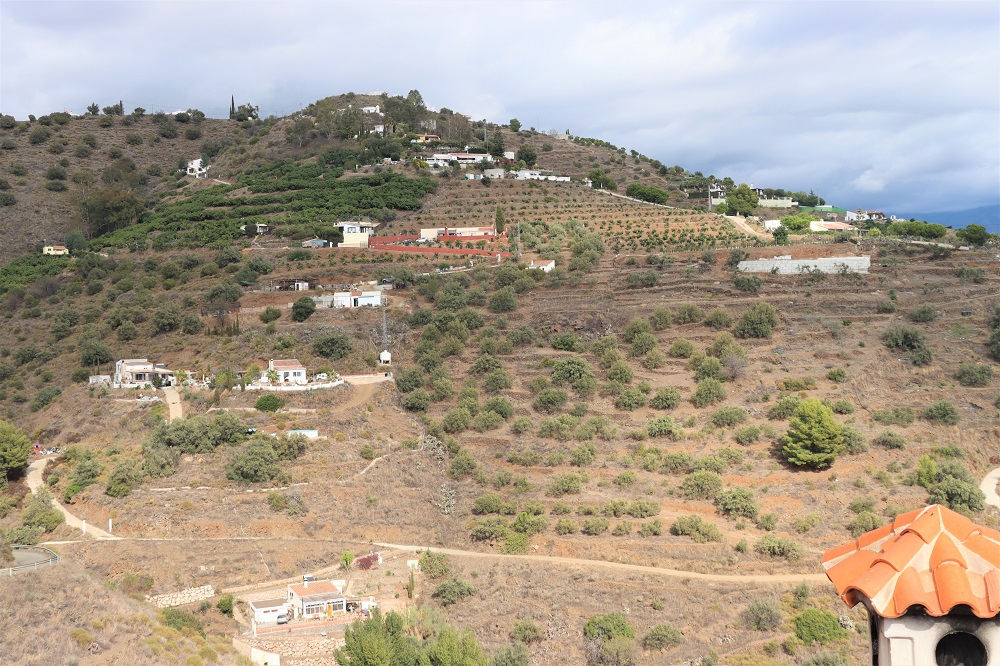 It has been a trend in the last 7 years to plant mangoes instead of avocados in Andalusia. When we came here some 25 years ago, the only fruit cultivated in huge farms were avocados... which were or still are being exported to Central Europe and other parts of the EU including cosmetic companies.

Since an avocado tree consumed so much water, there had been suggestions in the Agroindustry that mangoes have lesser water consumption and therefore for those who still have lands, they were encouraged to start cultivating it. The mango variety that is very popular here has a height of about just two meters and has a huge fruit of about 600 grams each and is so sweet. 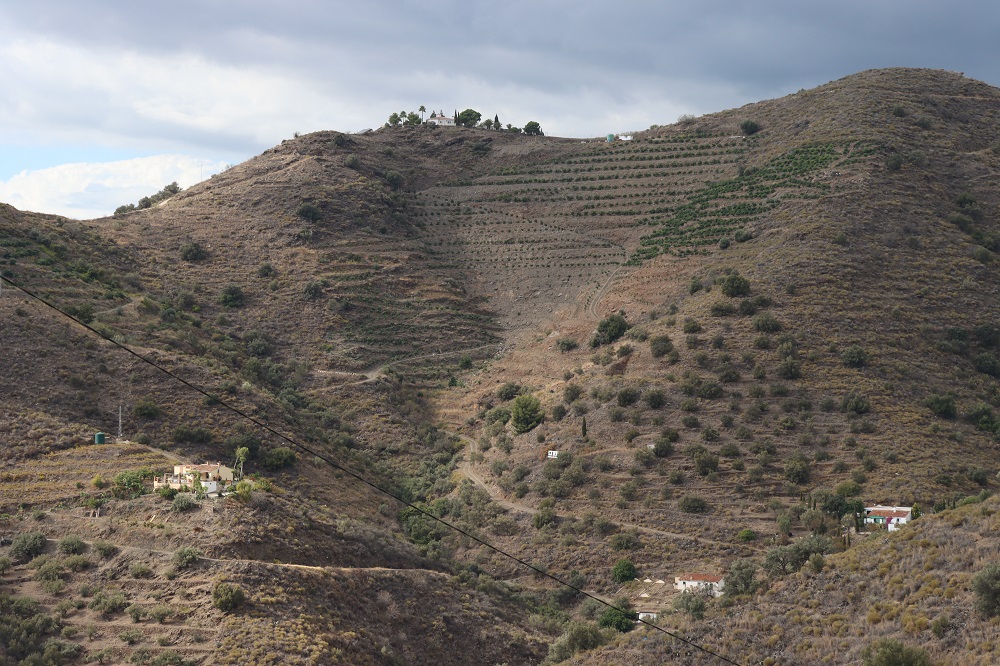 This modest pile above is owned by a good friend who recently made his hill into a mango and olive plantation. We have known him for 25 years now because he used to take care of our avocado finca located in another campo. He has three sons who each get a piece of this land. An industrious young men who each help each other to maintain their parents legacy. In a couple of years, this hill will be so green. The avocados bear fruits after 4 years of planting in the soil.

Everyday, I make it a point to have my camera ready so I do not miss the sunset. When the sun starts to descend, it is very fast. Sometimes I would just go up on the top terrace and wait for the best scene before the sun hides behind the mountain. 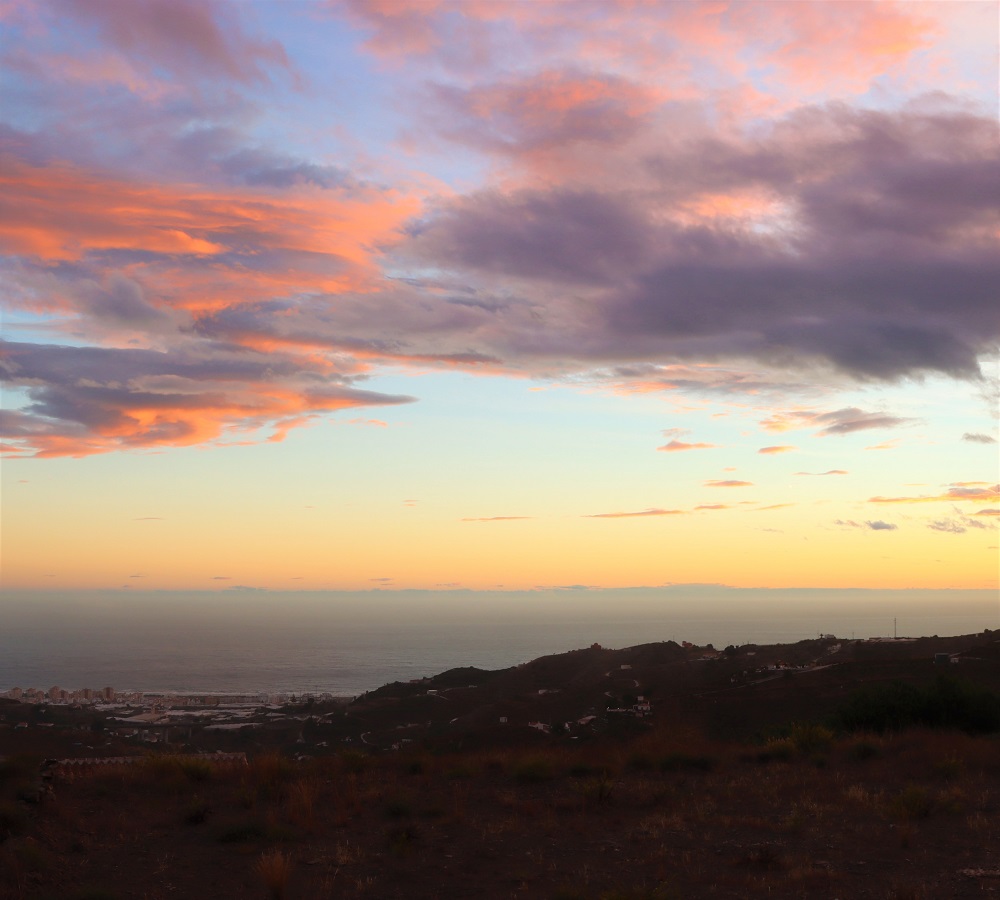 I love it when there are clouds in the skies while the sun is setting... because one can never be sure what colors are reflected on the clouds by the rays of the sun. Just have a look at this beautiful golden colors below!

Until next time.... see you around! 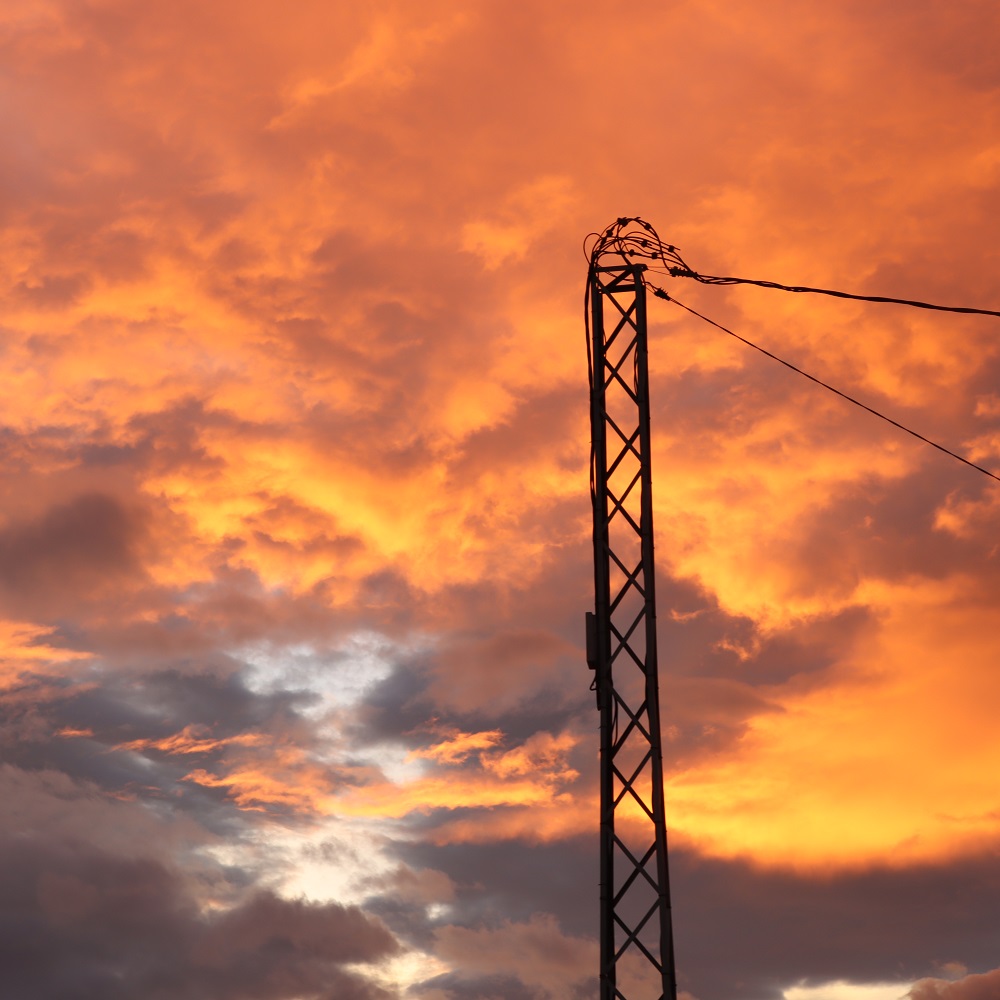 All images are owned by @mers

When the sky is clear, one can see its blue reflection on the Mediterranean Sea and it´s always fascinating to see huge cruise liners or cargo vessels from Malaga on the way to various ports in Europe.

I can imagine how magnificent that view would be. The golden hour is so beautiful!

It is always beautiful to see the sea and everything that goes with it..And the sunset...aaaaaah! Thanks for visiting!

Exactly. So glad you have so much access with that beauty!

Maybe I am lucky, but it is pretty cold also. Today we are heating for the first with woods... cold at 13°C.. Although in Vienna, the temperature is only 3°C and sometimes the snow will fall down
.

Hahaha... you have to elaborate why it is same as with the life of a person!

@sisterhood2 57
about 2 months ago

You are in such a good place my friend, witnessing both the beauty of sunrise and sunset. Isn't it very destressing to view nature abound compared to the smog and traffic of urban life!

Exactly! Nature is what we need to remove all those "radicals" that lingers in our thoughts, Lol!

An old Spanish guy in Cambodia used to call "beréber" because I have red hair and freckles. It was years before I me this guy, but I was fascinated by the Islamic/Arabic history of southern Spain, and I really liked learning about how the languages are intertwined historically. If it wasn't for visa issues with my family, it's a place I'd love to visit one day.

Hi Justin! Well, put Spain in your bucket list, later you can still come when the pandemic is over and everything settles with the visa issue. Yep, the Arabs had great cultural influence here in Andalusia. One can see it in the architectural style of the buildings. I have visited Alhambra de Granada, it was so beautiful , the murals, carvings of the palaces in the ceiling are so amazing which took ages to make. One day, you´ll be able to visit Andalusia.

Breakfast with a view with a spectacular sunrise! Life is pretty good! ✨☀️🙏🏼

Thank you... luckily, we are here on the mountains that we´re able to have such kind of view. Many thanks for dropping-by.

I never been to Spain or any other country in the South! Btw, Are you Filipino?

Yes dear, I was born in Cebu City but I grew up in Manila. Thanks for being here.

Nyay!I'm not from Cebu but I live here for over 3 years na. Nice to meet you here 🤗 Can't wait to see more of your life dira na side po. Wait, diba gabie na diha?

Around 6 Kgs - 7 Kgs of olives are needed to press 1 Liter of the oil.

Wow, that is a lot of olive required for 1 litre of olive oil. 😅

Amazing views, I just know that olives trees does not need much water. Here in my location, most people plant mango trees in front of the house. Why don't they plant avocado trees, avocado trees, there will be too many caterpillars in the seasons when the tree want to change the leaves. In a tree there can be hundreds or thousands of black and furry caterpillars that eat avocado leaves. Most children are afraid of those small animals.

Most avocado trees are in a plantation area that far from housing.