Spirit of the Glass.... And Other Spooky Moments!

Do you believe in spirits! This is a big question that you might be confronted with. Back home in the Philippines, most of the people are very superstitious particularly in the rural areas... There are beliefs that most of our old folks tell us not to do this or do that. For whatever reason, for instance children particularly are scared about some encanto or tawo when you pass by a certain area. The belief is that you have to say a word or two excusing yourself to pass by that tree or area believed to have been populated by tawos. The word was said to be derived from the word someone/spirit and were invisible spirit left out (not blessed) or had been in hiding during the Spanish colonization in 16th Century when they introduced the locals into Christianity and blessed everyone. According to old persons, only a trained healer or quack doctor (not medical doctor) can heal a person who had been "punished" by the tawo. 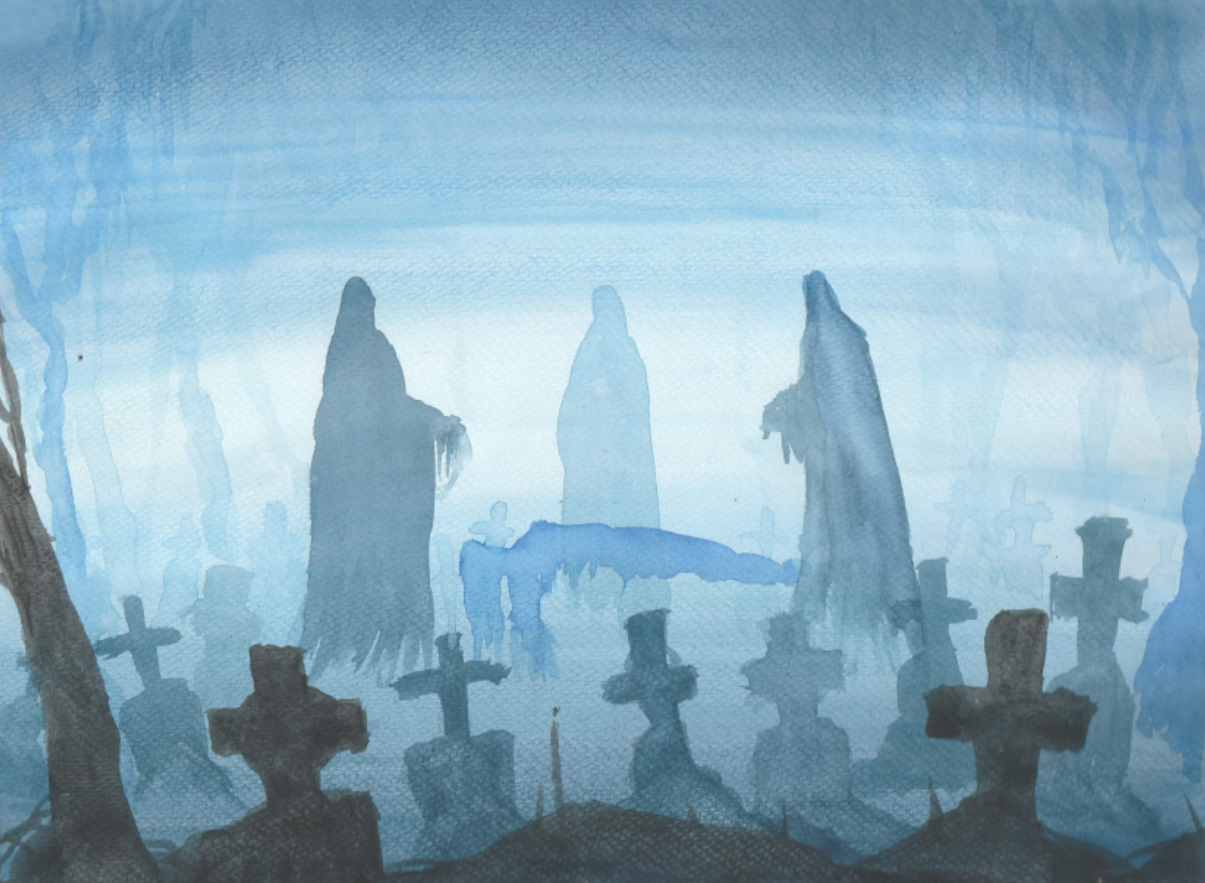 I was 13 years old when my grandfather (Mom´s dad) succumb to his injuries suffered from an accident. He worked in the maintenance department of a local airline usually knocking at the door of our dining room every morning and waking up my aunt so he could cook his rice and fried his fish. He would bike to his work before 6 AM. He usually biked and stay on the right side of the road and on that day, he was hit by a fast running military car... driven by an army officer ( I was not sure what his rank had been). His wake had been in our house. People who knew my grandfather paid their respect and stayed overnight and play cards or whatever to stay awake until it was time to go home.

A few meters away from the crowd, an uncle was fetching water manually pushing the handle of the well up and down to fill the tank on the roof. I was putting on my socks to warm my feet because it was cooler that morning. I had been talking to my uncle thru the kitchen window just about 2 meters away from me. The dining door that was wide-opened, was about 5 meters away from where I was sitting. Suddenly we both heard a very loud knocking on the door. My uncle saw no one because he was directly seeing the door from the outside just a couple of meters away from the well and I was sitting inside in front of that wide opened-door. There was no one we saw, but the knocking was loud...the same type of knocking my grandpa always did. My uncle got scared and stopped what he was doing and ran to the crowd and telling about the incident. I went to the coffin of my grandpa and silently told him he should not scare people. I had been my grandpa´s favorite grandkid, so I was not afraid of talking to him right at that very moment.

I was expecting he would show sign that he was still around.... I looked at my watch and it was nearing 5:00 AM, it was the 3rd day of his passing! 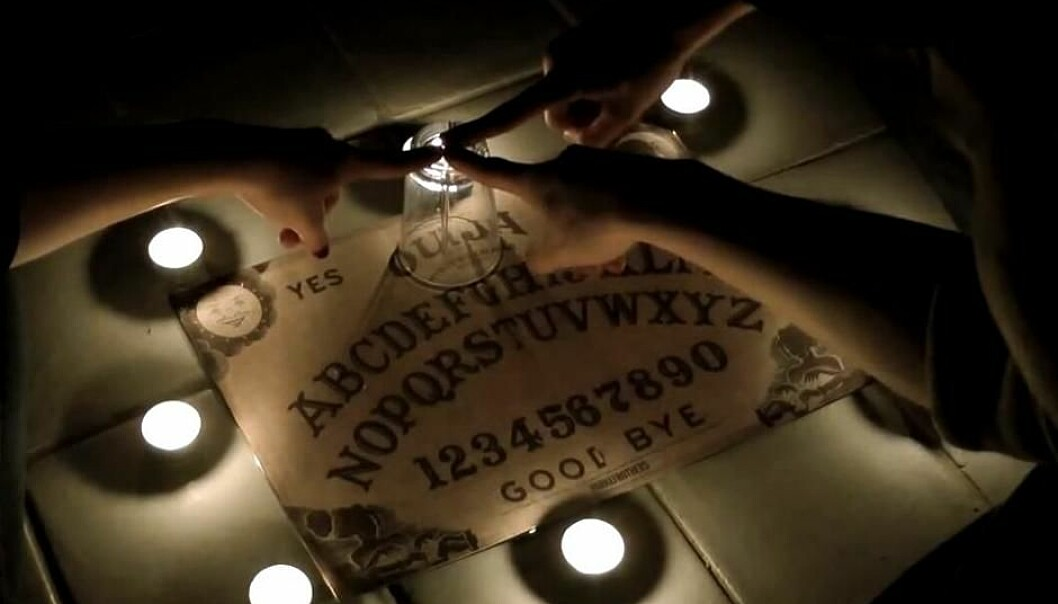 Spirit of the Glass

Have you ever experienced the Spirit of the Glass? I did this with a group of friends from the company I audited while in Manila. We decided to do it on the eve of All Saints Day . One co-worker who was into this before outlined a piece of cardboard with alphabet, numbers, a yes and no on the upper side and the word Good bye below the numbers. We lit a couple of candles and the 5 of us gathered around the table everyone held each of our hands. Everyone was excited but very nervous. We turned off the light and the session began.
Our friend, who was into this a couple of times before, led the prayers Our Father and three Hail Marys. I could not completely recall the steps she made but after the prayers, she asked us to put our two fingers on top of the upside down-glass. Our friend started calling the spirits asking if someone was in the room. There was silence, we could only hear the breathing of each of us. The glass moved to YES!!! OMG (!!!) I was not sure if it was really moving or someone from the group was moving it, I couldn´t believe what was happening. I wanted to freak out!!! Each of us prepared at least three questions which were not spoken but only on one´s mind. One by one each asked his/her own questions and when answered by the moving glass my friends had goose bumps. My turn came and I have already prepared three questions below:

The reply was so astonishing because all were answered correctly except for Question 2 which had been in the future at that time!!! That was when I got scared... If one of my friends had been moving the glass, how the heck did she/he know the correct answers to Nr. 1 and Nr. 3.....only me knew the questions and answers. We ended the session and thanked the spirits and then we moved the glass to say Good Bye! The session really blew my mind because my friends related that they too got correct answers. I just could not believe what I had experienced! It was simply too good to be true... but the replies to our questions were really accurate!

With regards to Question Nr. 2 , the Spirit´s reply was YES and this became very TRUE coz 2 years after the session happened, I moved to Europe for good, almost 40 years ever since.

A month passed... a friend asked me to accompany her because she wanted to see a fortune teller that used cards and examined the person´s palm. I decided to join and also asked for my future! I asked the same questions from the spirit of the glass session and that she said my mother´s age had been beginning 50s. That I will live abroad in the near future. Further, she said that I was the only girl in the family with many brothers. She didn´t say exactly how many brothers but said that a couple of my brothers will depart sooner and forever! Again goose bumps and I was really really scared. 12 years later, my younger brother died at age 35 due to a rare bone cancer called chondro sarcoma, a one in a million case. 18 months later, my older brother followed (2nd eldest) and died of lung cancer that was diagnosed after a fall he had when fixing the roof.

How about you.. have you experienced some paranormal activities in your area? Do you believe in ghosts? Until next time.. I´ll see you around!

Well, in Austria, they practice trick or treat so the children get sweets from the neighborhood. They are normally in groups and giggle when they get some candies and chocolates... LOl!

Scary stories @mers, but I must admit to believing that spirits do try to reach out to us! I shared my 2 experiences in my comment to @carolynstahl's scary stories uf you'd like to check it out. I think you'll find her stories very interesting too 😉
Thank you for entering our #bow, I enjoyed reading your scary stories!

My pleasure to join the #bow, thank you so much. I really believe in spirits and I think they also protect me from any harm. I´ll go check @carolynstahl´s post. Thanks for the info.

Hey @mers, please remember to share your link in the Blog of the week on our Discord Channel

Thanks for the reminder I will try to post it on Discord with another account, see if thid works. My Discord has been down since a year, I have been trying to repair the Java Script but to no avail...

I just did now.... as my old Discord account has problems, I simply created a new account. Thanks!

I had a scary experience too with the Sprit of the Glass back in high school days in the Philippines. The glass moved as it answered our questions and they were all correct. We dared the spirit to bang the door if he/she is real and we got the scare of our lives when it did! We all scrambled to get out of the room and we never, never played the spirit of the glass again.

Hahaha...one should never challenge the power of the spirits. When we did ours, we quietly ended the session and said good bye to the spirits... we never did it again.

I know, lesson learned! I believe too that the spirit of the dead comes back to visit living relatives and friends. There was one weekend when I was alone in the house, hubby was at work and my mom and brother who are living with us were out on an errand. I heard somebody came in I turned to look who was it. Nobody. Maybe my dad who passed away last 2016 kept me company.

Well, we are not scared when our Dads visit us, are we? I would like to be visited by my dad to tell him so many things, things that I was not able to tell him before he departed. I was talking to him over the phone an hour before he passed away. He was just listening and his tears came down rolling during the time I was talking to him. But I was able to tell him about my mom that he should not worry at all for we will take care of her. And that was just the worry he had in his heart. I think he had been enlightened to hear my voice, about taking care of mom and my farewell to him.

I think the spirits knew you were just making fun and saw that you were simply trying-it out!

I also experienced this spirit of the glass thingy and that was pretty scary at the age of 13 with friends, from then on, I promised to myself that I will not do it again unless I'm drunk because I don't want to see faces I don't know, they were vague and scary and when I came back to my senses I told myself that, that was just a dream but no, next time I want a tuba first before doing so😂

Hahaha... The tuba will be a good thing to take to be able to feel the vibes of the spirit with no fear!