I don't know how many of you are familiar with Viewbase.com but if you're not, make sure you check it out.

It's similar to Token Analyst or Cryptoquant only I think it is more user friendly.

Anyway, essentially it is a website where one can check the flows of BTC / ETH and some of the other big players out there, per day / week / month, to exchange wallets and from exchange wallets, probably to cold storage.

Not all the exchanges are included on their list but only the big ones that probably 99% of people use.

The last couple of months have been completely insane. I guess this is what bull market is all about. Craziness. We've been hanging around with bears for so long that I almost forgot how it is absolutely normal for prices to go 5x - 10x - 20x with in a month when bulls take over.

BTC, the king of them all has had an amazing rally those last 2.5 month. And when BTC goes beast mode it usually drags alts to new highs as well. This time was no different.

From the moment it smashed its previous ATH (2017) it just never looked back. A small correction after it hit $40K only to test the $30K support level and then all the way up to $58K. 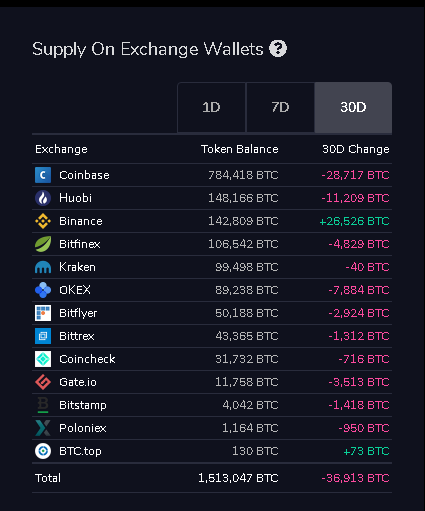 You may wonder why was this happening in the first place. The No1 reason was institutions and corporations such as Tesla, or MicroStrategy that had nothing to do with the crypto world up until now have recently become the biggest players and compete one another who's gonna hold the lion share.

Another reason as you can see from the screenshot is that for the past 30 days, sentiment was absolutely clear. After people made their BTC purchases on an exchange they withdrew their holdings to cold storage. Minus 37K BTC is a massive amount and indicates that those BTCs weren't for sale anymore. 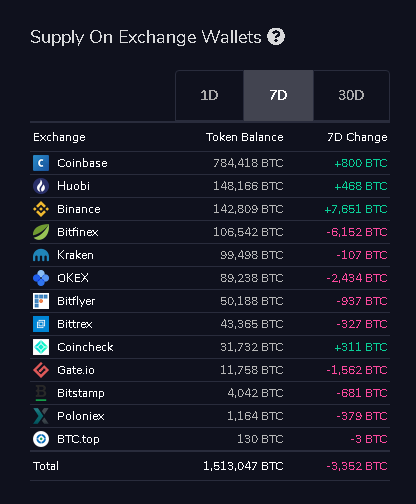 That was exactly the case for the past week also. Every single day, investors kept withdrawing their BTC holdings from exchange wallets into cold storage "stating" theat those tokens aren't for grabs no more.

Note that on both screenshots the number of BTC flowed towards Binance is massive and my guess is that it might have to do with the recent BNB rally, an insane rally actually. For those who like stats, BNB was a $43 token 23 days ago...and it climbed as high as $350. BSC and pools have definitely something to do with that and ETH is just pushing everyone away with these outrageous fees...

So what changed the last 48 hours?

Some people suggest that BTC was overbought and to some degree I second that statement. But if it weren't institutions who dumped their tokens then who was it?

It could be a whale or a group of whales or just people taking profits only to buy back in later on. 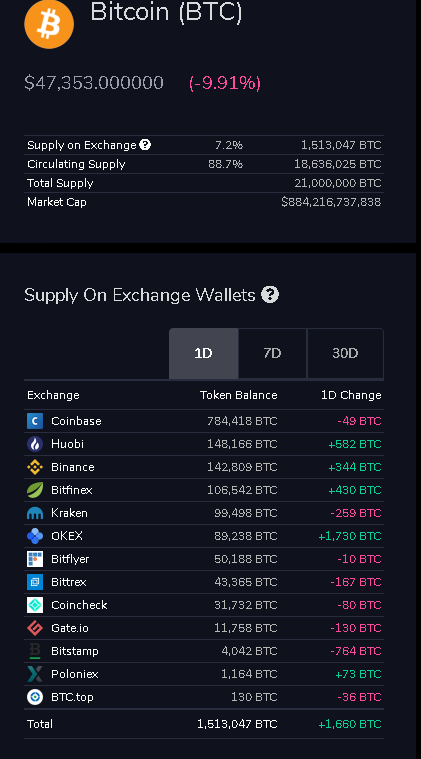 Price can't go up indefinitely. What's the point of holding if you can't take advantage of your profits from time to time.

The thing is something did change the last 48 hours. Maybe this Elon Musk - Peter Schiff war has something to do with it or simply sentiment changed.

Yesterday was the first day after 30 consecutive days that the number of BTC deposited to exchange wallets was higher than the number of tokens people withdrew.

The less available Bitcoins on the exchanges the thiner the order books get.

And the thiner the order books get the easier it is for price to climb higher. Just a bit more expensive each time.

Now just because there are 1660 BTC more on the exchanges than yesterday doesn't necessarily mean that this caused the ~20% correction.

But at some point a correction had to happen in order to move forward, right?

For many days in a row Bitcoin not only kept smashing one ATH after another but even when it didn't it was traded $500 - $1000 lower than its last ATH for hours....every 30 min candle was a candidate for a new ATH. You could just feel it.

48 hours later, do you think that we should expect a new massive correction?

Lemme know your thoughts in the comment section below.

Have a good one people.

I heard that F2 mining pool has dumped over $1.8B worth of Bitcoin in just ONE hour. ONE HOUR !
That's what happened yesterday

More info why you see this.
Posted Using LeoFinance Beta

Also read somewhere that $5.6 bill were liquidated yesterday only...

I read that from you on twitter or noise.cash I guess and it makes sense for this dip. But isn't supposed bull markets have pullbacks? What do some people think that it will go up forever. I'd say that's not even healthy for a steady growth.

Price def can't go up forever. A long as it's not price manipulation like what happened at Kraken yesterday then it is absolutely necessary.

That's how support levels and resistance levels are created.

We are having a big correction now, and I'm picking it to continue for a while yet

Crazy how things can change in a day...

I think a short power down would instantly raise the price of Hive. Just look at Steemit!

That are some interesting numbers and I think some took profits, assumed that many will panic and sell even at a loss and than they will buy back. I am sure the sharks are waiting for price to go down for some more and than buy again, this is how the game is played. Thus, we shouldn't act by instinct and just hold our ground!

For many it's really hard to remove emotion from the equations, thus they panic sell...usually on tiny profit or loss

and here i am simply holding :P

I have this feeling that we are in the middle of a correction of 20% or more of the BTC and at the same time of a strategy to execute short investments and make a lot of money in a short time betting on a momentary fall of the cryptocurrency. On the other hand according to the publication there is an interesting amount of BTC in cold wallets outside the control of the exchanges, this will cause the supply of the crypto in these places to reduce, consequently increasing the price of the same as the demand for BTC increases. I wouldn't be so worried about selling my BTC, even so the correction will cause the price to return to $20K. Cheers, great post.

I think we might all remind ourselves that markets seldom rise in a straight line. Back in January... so just six weeks ago BTC took a dive from $42 to near $30K. And that took two days to happen. Now we've taken a dive from $58K to the lower $40K's... actually, not even to the January pre-correction high.

Cryptos are super volatile, even BTC. 30% swings hither and yon happen all the time. The only thing that might be different this time is that we have large organizations onboard for the ride, and they might not be used to these kinds of wild swings in their asset values.

I DO think the bears/shorts out there look for a little overexuberance and try to take advantage of it. They've got access to the exact same information we do (or more) and they're probably monitoring it more closely than anyone. They saw an opportunity and took it. It also helps that most of them are probably not playing with their own money. Much easier to stay unemotional and pragmatic on something when it's someone else's dollars at risk.

The value can go up and down, but the amount of BTC coin won't go away. Whatever Elon said, it may lead short term investors buy or sell. But I am going to HODL mine (even though it is only a tiny amount).

I heard a rumour that it might have been F2mining pool dumping a large amount of Bitcoin which caused the crash we saw over the last couple of days. Either way, I bought some of that up and politely took it off their hands!

I'm not entirely sure but I think that on the last big bull market we went trough 6 big corrections and bitcoin kept setting new ath right after. This corrections are necessary and this probably won't be the end of the bull market.

Ya, this time though it's the exact opposite..

BTC has already made about 20 ATHs but only 2 corrections

What a wild ride on the back of the bull, all the way to the moon.

Congratulations @mindtrap! You have completed the following achievement on the Hive blockchain and have been rewarded with new badge(s) :