With the new reward system, I have started a new Splinterlands journey with an alt account starting from scratch to see how far it can progress.

For day 13 Part 1, there will not be any daily quest opening. As you can see at the picture below, the time taken for the season to end is earlier than the focus. So the part 1 of day 13 will be focusing on the

We start off day 13 with the following statistic.
End of Season Chest= 108
Rating = 2645
Focus = Earth (Why does it always rotate between earth and death?)

I played a total of 8 matches with 5 wins and 3 losses. My rating managed to improve to 2687. I realise as it is near to the end of season, it is always easier to climb. Previously, I had spent days stuck at around 2400-2600 range but the last 2 days, my win rate improved despite no changes in my cards selection and yet I am winning more.
My EOS chest grew by another 1 more to hit 109 and my daily bronze chest reached 19 which is lower than usual but because i also played less matches in Part 1.

For the 2nd part of day 13, I manage to play 14 matches and I won a surprising 10 matches with only 4 losses. And that further push my rating to above 2.8k which is the best ever rating this account has ever achieved. I think the key reason is that during the EOS, many people are pushing themselves to go higher and thus, I can match with opponents with lower level summoner despite having 2.6k rating. And our end of season chests manage to cross over to 110 in total. Daily chest also manage to hit 25.

All 110 bronze chests are available for open! To be honest, the number is even more than my main account previous EOS chest. A champion 3 only gives 80 EOS chests in the previous reward system. So it is kind of exciting to open so many chests. 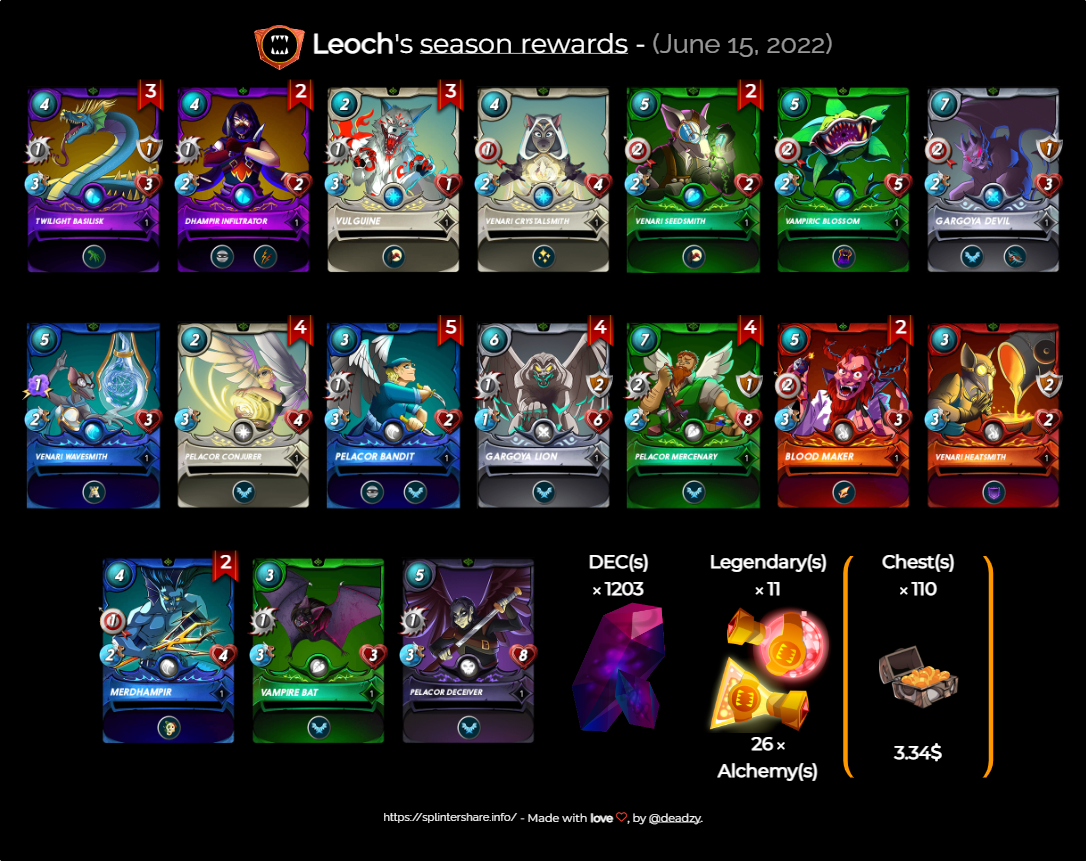 So in total, 110 bronze chests rewards me with

For the Day 13 Part 2, I will consolidate all the earnings from the daily chests(including the upcoming day 13 daily) and end of season chests to let you have an overview of my earnings for 1 whole season under the new reward system. I hope you like this Splinternoob journey series.

I am curious to see how some of you are doing as well. Please share with me your EOS chests in the comment section below.

!PIZZA for the returning koodies.

Great result with the chests!

Thanks. Able to open this many chest is already a joy on itself.

I need to learn to be good like you

As a lowly Silver league player, I tripled my number of season chests. I have been renting more cards each day, but I have also been winning more chests than the Daily Quest rewards I was getting before.

Nice. Make sure that ur rewards are able to cover back the rental cost.

Yes, I check my previous day's rewards before I rent and don't spend more than I earned. Most days that is not a problem. Worst case scenario, I spend all the DEC from the previous day but still have whatever cards/potions (and rarely packs) I received.

This new account seems to be growing quickly, @namelessnameless. Are you still playing on your other account? How is it doing since the change, if you are still playing there? I don't play at all but I am still interested in how those who do play regularly are doing.
!CTP

Oh, okay! Thanks for the clarification. Happy Play2Earn.
Happy Weekend! 😀