I actually won a prize playing golf this week. It's a miracle.

It's been a while.

It's been a while since i even played a round of golf.

One of the bes thtings that i have done since moving to my new village was join the local golf society.

They have one round a month in different courses across the country.

It was Adare last month and Kilrush this week.

Luckily this week was a team game which always amkes it more fun for the casual golfer. I haven't played a round since Adare so it's very hard to be competitive when your not playing much golf.

It's one of those game sthat you can pick up anytime but need to put in some hours to be good at it. 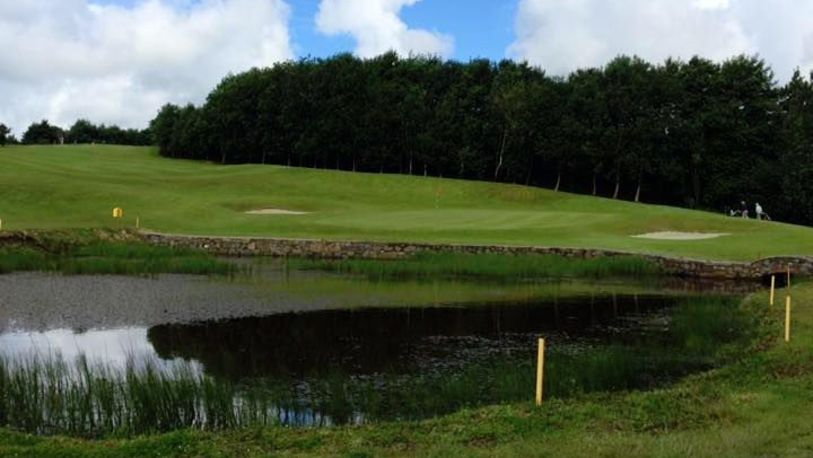 This was a pleasent surprise for me actually. We grew up not too far form the club when i was younger but it was a terrible course at that time. Poorly maintained and very wet when it rained and it rained this week.

We were actually expecting the day to be cancelled becaue the weather had been so bad but luckily it cleared just enough to make it playable.

THe format for the day out was teams of four, modified scramble.

THat means that all of us drive off with a tee shot. We pick the best of those four tee shots. Place our ball there and play out our own ball for the rest of the hole.

We then use the best 2 out of four scores for the record and do this all the way around for 18 holes.

Our combined score was 104 points which was good going. We played well at the right times and couldn't have done much more than this.

Second was 102 and third place 100 points so there wasn't much room for error to win the competition.

I cna't claim much responsabilty for the win as it was a team effort but i did put in a lot of scores. My driving was very strong and we took a lot of them to play from over the day. My shots in between were fairly terrible and i couldn't get my irons or chipping to work properly. But at least my putting was strong and i din't leave many points behind on the green.

I don't care though and i don't care about the crappy prize that we will get form winning.

It was just good to get out playing again and have some fun. Winning is just a bonus for a good day out.

Congratulations 🎉🎉🎉, I really don't know how to play golf and I would love to play someday

Guess you deserved a !BEER :)

Hey @niallon11, here is a little bit of BEER from @fullcoverbetting for you. Enjoy it!

Honestly, I like watching golf, as it is a sport that teaches you patience, but for our body, it is not suitable. It's a relaxing sport like yoga, do you agree?

Golf is like billiards except that you only have one hole. How long does it take a person to learn techniques of hitting the ball? I want to play it one day

Golf is to me the most courteous game on the earth and its so rich in royal features that at times you wont be bored at playing a piece once a week. Enjoy a ride on Golf Cars. Ha ha, so slow and enjoyable.
But, I dont actually know the rules of the game. Wish one day I will know how to play.

Played a bit of golf myself this weekend albeit the crazy variety with the kids and I’m sad to say I got beaten by a 9 year old! Congrats on your victory though. Mighty stuff man, always nice to be in the winners circle. I won a prize yesterday myself, was a mad round, with 3 scratches, 2 of which were shocking as i was in good shape after the tee shots.... It was windy as anything and played other 15 holes well including 7 pars and a birdie. It got me to 35 points which was enough to take 4th, which I was well chuffed with.

That 104 was some shooting from ye boys, that's a fair lash of 3 pointers and maybe a few 4 pointers 👏

Big congratulations on your golf success...I loved the golf course..

Well done you! A friend of mine recently got a hole in one at a course and was awarded all sorts of stuff for sinking the amazing shot. He hasn't shut up about it since and honestly, he shouldn't stop talking about it!