The new system has changed the game. 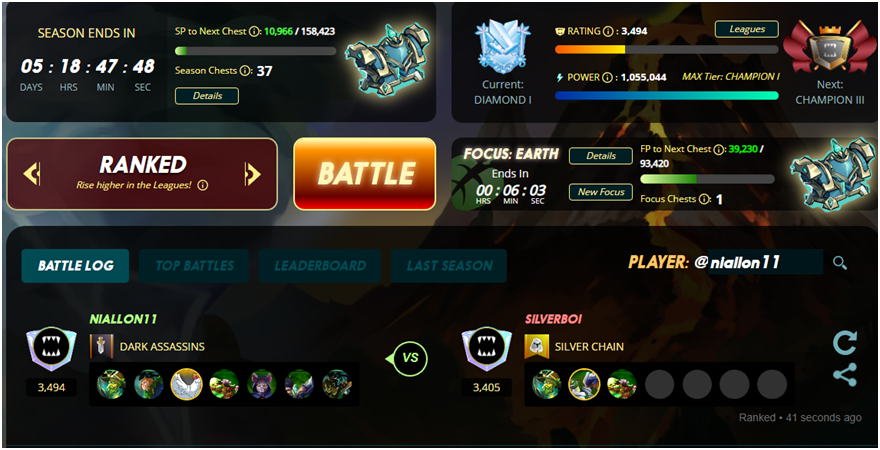 There was a time that the choice was very simple.

Log in.
Hit your daily quest.
Move up the ranks.
Let your mana recharge.
Receive your season chests.

But that won't work any more.

Now when you log in there is a choice to make.

You have a daily focus in front of you but it is just done by splinter at the moment.

When you look at your oppositions history it is very obvious who is chasing daily chests and puts them at a disadvantage.

Look at this player with the same level 8 Obsidian for every match. I wonder what team they will select this time?

Then you can run down your mana trying to get one more chest.

Where do you draw the line?

There is no guaranteed number of season rewards now.
It all comes down to winning matches.

Then the quality of your chests depends on your highest ranking from the previous season.

I normally get 80 season chests. How likely is that now?

Will the rewards be better by getting higher in the long run.

My thoughts on this are leaning towards raising my win rate.

The more games that you win the faster you will stack up the season quests.

I know that there are a lot of smaller factors in how quickly that you can get the next chest but over all I feel that the value is in keeping up your win rates. Getting as high as possible in the leagues.
Racking up as many season chests as possible.
Keep your mana at a reasonable level.

The rewards are weighted to be more valuable the higher that you are in the leagues, so while my daily chests are usually only 4 or 5 now compared to 15, they have been a lot better than other seasons.

If I can bring this up to 80 chests in the new system that are more valuable then i think it will be much more valuable for me. 80 higher rated chests should give a big pat out at the end of season if i can reach that goal.

That will be the real challenge with the new system.

Trying to resist the temptation of chasing daily rewards to hit a big result at the end of it.

It will be interesting to see how it plays out compared to previous seasons but even form the few chests that i have gotten so far it's easy to see that there are less potions and more DEC in the rewards.

Cards worth a few cents now will have a much higher value in the future as the print runs out. We have a strong community and seen this happen every time as it grows with the game.

Just how I’ve envisioned it. I’ve not played yet, I’m on a sort of break. gathering momentum. But I’ve been seeing many reviews. Would be joining y’all soon

Great to hear it.

Sooner that you get back to it the better. This is the best time to stack all of the cards before we see the next wave of onboarding and it gets busy again.

The new reward system has definitely been intriguing and has gotten a lot of "retired" players back into the game to try it out.

I think the game needs to be approached in a different way now and the question that needs to be asked is do you typically play in the Champions League for the majority of the season or do you play in the Diamond league and make a push for Champions in the last few days. If you are the latter, it might be best to stay in the Diamond League. The point gap between a win in Diamond league and a Champion chest is quite large that you most probably need 5 wins or more per chest.

However, looking at your CP, you most probably have a stacked deck and should be able to play in Champions League comfortably. So maybe the best would be for you to ignore the dailies for the first few days and focus on getting back into Champions League ASAP.

IMO, the new reward system is trying to force you to play at the same level as your previous season or get you to punch up. I just restarted a few days ago from novice and now back in Silver league and I get like 10 daily chests in 30 mins. Granted the rewards aren't fantastic, but it clearly shows how the new reward system is intended to play out.

I think that it has created a new buzz again with the updated system. It would be great to see a lot of the older players get interested again as they drove the game forward in the early days.

I do play about half the season in champions so will be on the fence for the new system. I'll try stick with champions for the next couple of seasons and then maybe try diamond to see how it plays out.

I have decent deck with a lot of maxed out monsters so can win at champions.

I just restarted a few days ago from novice and now back in Silver league and I get like 10 daily chests in 30 mins.

That's a good place to be in and hopefully will help you to build up your deck nice and fast to move even higher. It's good to see people having to restart and change up the economy a bit. It feels like a good move and when the bots come back online will drive up rental demand again.

I think the current system requires a lot more work. At least from what I see, it's much easier to get a chest towards the end of the season but it also looks like the chest rewards (outside of DEC) seem worst. I am getting far fewer cards or higher ranked cards.

For me the card rewards seem better. DEC is way better and i've only gotten a couple of potions all season so i would say that they are much better.

I do find it harder to earn the daily chests but i might need to stay in diamond instead of champion chests. It could be about finding the right level.

The higher league you play, the higher rewards you get. The Bronze league get suffered from the new reward system :)

I haven't played in the Gold League this season, but that could potentially be the sandwiched league whereby the chests you get aren't that much while the rewards don't fully compensate for the decrease in chests. Also Gold League in my previous experience is one of the most competitive as you have heaps of maxxed players trying to push into Diamond.

I've been playing my ass off recently and things have been generally good for me. My favourite daily focus is Dragon because while being predictable, it is still unpredictable since it combines with different splinters.

Anyway, I can't imagine how tough it must be for people in Diamond and Champion league. The competition down here is stiff as it is, I reckon it is brutal up there.

It's by far the easiest to get the wins with as it's still unpredictable while the others are always about the same.

It's tough up in champion but fun too. You can win a lot of matches just by having maxed out cards. Unfortunately a lot of my older ones aren't maxed out and are too expensive to get there now.

That's why i want to max the chaos so badly while they are still cheap. There are some heavy decks up top.

Thanks for sharing your point of view of the new reward system!