Time to hustle even harder. 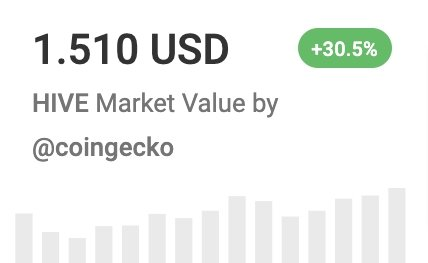 Hustle as a user and as a community.

This is becoming a regular occurrence at the moment as Hive is finally picking up a bit of momentum as the rest of the market stalls.

About time, most of us would say. The funny part is that now we are making good gains. You will see a lot more activity across the chain as casual users see the dollar signs and realize that they can make some good money from being active.

We have a couple million accounts but only 20k active users across the blogging sites. I can guarantee you that will change as the market goes up. Unfortunately for these users, they did not realize that 1 hive = 1 hive and always has. They just didn't hold the same long term value in the token to feel that it was worthwhile earning it for free.

Meanwhile others have been checking in and working every day to earn hive while the competition was low. Stacking and stacking for a time when the price did catch up to the value. Now that we have some stake it means we will have to hustle even harder as things get busier around here.

The reward pool will be more widely distributed which as much as we don't like to hear it can only be a good thing. I know that we all like money but the fact is that for long term growth to happen, we need the users more.

I have often written about momentum being a big part of success and now we will see if i as talking out of my arse or not. ( I usually am to be fair.)

@splinterlands is still the number 1 blockchain game.
@leofinance is releasing 2-3 phone apps for their tribe.

@edicted wrote about 4 potential airdrops to hive holders in the next few months. 4 new airdrops.

This is all positive momentum. This is a platform that we can build real growth onto.

People are starting to look at hive now and realize that there is something behind it.

This is the time to start shouting across social media about what we have and hat is about to come.

We can hustle hard as individuals but it's even more important that we hustle as a group to spread awareness and to bring in more users for the eco-system.

I have said in the past, that when we hit $1 hive that we will see some of the old users flooding back in. We are at that point now so it's a good time to jog their memories that they have a hive account and that it is waiting there for them to jump back in and get involved again.

In business terms, it is 15 times easier to retain and existing customer than to try and get a new one. Old users already know how to operate on the system and it's just a matter of giving them a good reason to do so.

There’s so many ways to benefit from hive. Be it money, friendship or knowledge. Those of us that hustled during the near market will benefit greatly.

In a couple of years it will really show who was here hustling in the long term. People with big accounts and earning a living from hive.

Cant wait to see where the next twelve months goes.

We are all doing work. I can’t wait to see the day when hive is $500 and our votes would be life changing.

I can feel the buzz already. The more this happens, the more it will happen, lol.

I know I'm excited, but I've seen this happen and then stall for quite a while. We shall see. One thing is for sure. #Hive is still extremely undervalued.

This is only the starting point. We will have dips but there is finally a bit of hype and excitement behind the coin.

I can see it. We just need to keep adding value and I see more here than anywhere.

Many old users even sold their HIVE during the dip. So, sometimes, it's difficult to be hodler and/or to be active when the price is 'low' in fiat terms.

It's not easy to keep going in the rough times but that is where the money is made.
The people who do it day in and day out regardless of the price.

I hope to see a lot of them coming back again when the price is rising and make a better attempt next time around.

Distribution of votes to small and new accounts will help to retain the users who do come. Being discovered has always been bloggings Achilles heal and I hope that we can keep these new members. It is exciting times for sure.

Very important to spread the vote as new people arrive. The problem is getting them seen as they never come across my feed to see. I'm sure that there is a good way to do this but if you follow one any of the greeting accounts you get too much. I would like to see people that are posting every few days and making an effort.

It is difficult to be seen on Hive and most of the front ends default to what is most popular, creating a reinforcement loop.
I check every now and again the introduction posts and if someone stands out I will follow and vote a few of their posts to get them started.
The curator trails are doing great work and I hope that they will go from strength to strength in helping get new members up the first rung of the ladder.

There is just so much going on that is bullish for HIVE. Of course I still think we need more applications like Splinterlands because I think it's much easier for people to join because of an application.

Activity will indeed grow as the price does.