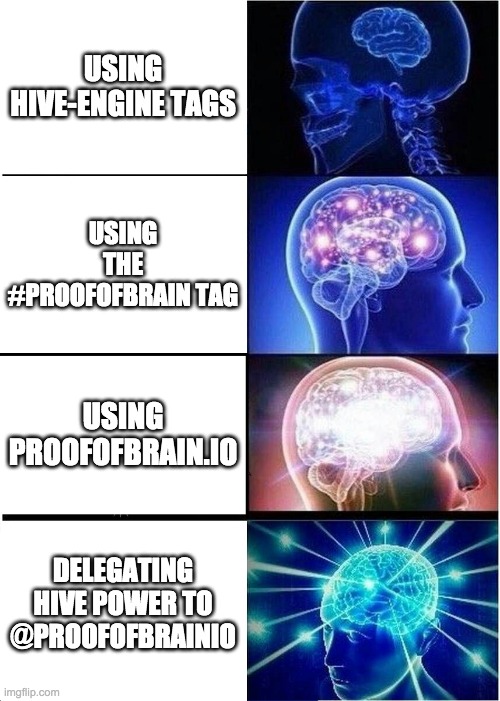 HIVE tokens have a much higher dollar value right now obviously, but POB has a much lower supply. This means that your receive a much bigger amount of influence per token on proofofbrain.io as the tribe is very young and small.

People that would be interested in this are those that believe the price of POB will go up in the future and they want a leg up in earning POB while the tribe is small and POB is easier to earn.

The Hive Power that is delegated to @proofofbrainio will make it's Hive vote worth something and help grow the Proof of Brain Tribe by offering bigger Hive upvotes to people using the #proofofbrain tag and proofofbrain.io.

Delegations may be canceled at anytime, but your POB delegation will be cancelled at the same time. There is a limited amount of around 20,000 POB power currently available for delegation, so I will update this post to rescind this offer if that amount is reached.

If you would like to make a large delegation feel free to reply or ask in the discord to make sure there is enough POB Power available.

Please let me know that you have delegated HIVE Power in the comments and I will make sure you receive your POB Power delegation.

Alright, done! Haven't used your tag before but I'll consider it from here on.

Thanks @emsenn0! You're the first to be delegated POB!

Thank you @chekohler! I'm happy to make your POB delegation!

Congratulations @proofofbrainio! You have completed the following achievement on the Hive blockchain and have been rewarded with new badge(s) :

got ya brain right here, just looking for some proof, ut io. Ya got hive delegation from me and i snuck some of your coins from the market,. Think ya need a street sweeper before i get there with mine,

Got ya POB delegation right back at ya! Thanks for the support!

Delegating 1,000 HP your way as soon as my resource credits will allow it (just a few more hours, I think).

Thanks @trostparadox! I see your delegation and I've delegated your POB!

Made the delegation, posted Take a look!

Cheers to all and TY, @trumpman
#proofofbrain

Thanks @regenerette! I made your POB delegation and I will take a look at your post.

ty, I appreciate this, @proofofbrainio

Nice initiative, In a few days a few delegations will return, I will check if this is still available once they do..

Hi!
I saw the post by @trumpman and I like your plan :)
Best of Luck to you!!
I just delegated 200 Hive, do I need to post / upvote via proofofbrain.io to receive curation rewards?

Thank you and thanks for the delegation. I have made your POB delegation.
No, you can interact on any front end with posts that are tagged with #proofofbrain

Thanks @leedsunited, you've been delegated POB

Do we need to take an IQ test for proof of brain? Yes, yes lame joke.

Interesting project. I will look into the tribe some more. Thanks!

Oof if only I hadn't already delegated to get leo, the 5 days will probably see the POB run out if some big names get in on it or I would with about 1000HP.
At least I can still earn so I can stake and start curating once I have more POB power.

Good to see the people that got the earliest votes over the first weeks, starting to vote and help curate while it is a low supply.

well, there is still about half of it available so maybe you will have time!

Never heard of it before, but I'll probably use it now !! Thanks for sharing !!

I don't have a a bunch extra, but @theroad2freedom delegated 50 HP.

Thanks @apshamilton, I've delegated your POB!

An interesting initiative. I have delegated some hp. @proofofbrainio

I was powering down 1700 HIVE, but now i think i can do a better use for it

I see this is a new community / project and it seems to me to be very interesting. From now on, I'm gonna use the proofofbrain tag in all my posts (by the way, I just did that in my most recent post).

So, initially, I made a delegation of 250 HP to see how things will work (and I can increase it later, depending on the results).

Question: Do I have to use proofofbrain.io to post, upvote and / or interact in order to receive my rewards in POB?

No, using the tag or interacting with posts with the tag is sufficient, but you will probably find that you get more POB upvotes when posting from proofofbrain.io.

I like to support, new interesting projects. 250 HP delegated to @proofofbrainio.

All of my HP except for 10 is on lease currently. I did go buy some POB and I staked it because I am long-term on all HIVE projects. As soon as I have some more HP, I will delegate what I have assuming this offer is still open then.

I have delegated some Hive Power over! Been curious about this project after checking my Hive-Engine wallet recently! Sounds like a great concept of rewarding brains :)

This is really a win - win situation! I'm still a small fry, but I really believe in this community! Just delegated 50HP to you!

Thanks so much @proofofbrainio I delegated 100 HP and received my 100 POB Delegation.

Question...where does it show I have a POB Power? I don't see anything on the list where my other Tokens are shown on Peakd Wallet or Hive-Engine Wallet.

Thank you @allcapsonezero! I have made your POB delegation!

Amazing! Thank you. I am excited about this project!

HI very cool what you are doing here. I sent 5 HP over to get started into helping. Thanks for your work.

Too bad I'm late for this delegation ...

Is this offer still good? What is the max?

Hi I think I just maxed you out! From my main account @revisesociology