I got my RUNI. My own, personal and unique NFT which will be available at my disposal till blockchain exist! Can you imagine how exciting that is!

As a player of Splinterlands we have been dealing with NFT's for a very long period of time. At a point it kind of feels like, we should have our own unique NFT within the game. Many users from the past have created their NFT within the game. To name a few Zaku is there, also ByzantineKitty is out there. Named and characterized after respective users name. Now it is going to be difficult to create such opportunity for all the users. Due to this many whales have repeatedly wanted such opportunity for themselves since that was not possible, Spilnterlands came out with a new proposal. Which not only will favor users to own their own and unique NFT but also it will enhance the reach of this NFT even outside of HIVE.

The Runicore (RUNI) is a new limited-edition promo card. Only 6500 to exist. What make it exciting is that each individual card will have UNIQUE ARTWORK. So you have your own NFT, with an artwork of your own which is not available in any of the remaining 6499 cards. So it's your own personal NFT to hold onto. These sort of projects are also known as PFP (Profile Picture). Not only it has its usual characteristics within the game but its unique artwork can also be used as your avatar/profile picture in different social medias. 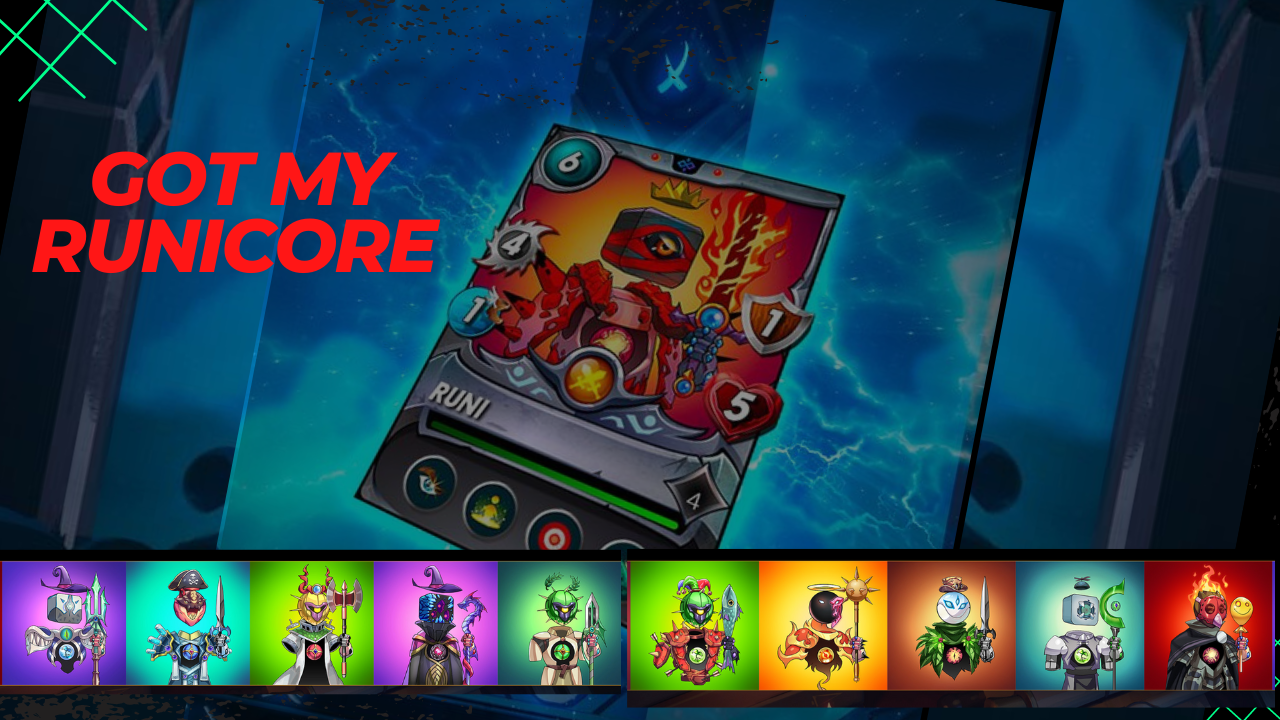 Well, this might not be exciting for many out there. But if you have been on this NFT platforms, you might have the slightest idea about how these uniqueness of NFT's makes people crazy without even having a utility. Cryptopunks, Boredapes and several others have taken the NFT market place by surprise. Some of these NFT's got sold for over 40-50 ETH each. To much surprises these NFT's had no utility at all. You may call it fun or money laundering or what not these NFT's were an eye opener to crypto world. With a proper utility these NFT's can be worth much more than they already are. Which is where RUNI comes in!

Why does people buy Crypto punks and other NFT's with so much money? And that even without any utility?

Honestly, I have no idea whatsoever! they probably have a lot of money to spare. Or they do not need that sort of money during that point! While the surprising fact is the price increases after every purchase/sell is confirmed. Quite a crazy market indeed but not sustainable for very long.

RUNICORE will be a Legendary Neutral monster which will have Melee attack in its forte. With the ability of opportunity it can strike opponents finding the best route for itself to damage the opponents card. While with True Strike ability it will not miss any of its attack. That is going to change a lot of facts. With low speed it can do massacre in reverse speed gameplay.

What is so special about Runicore? Why should I get it?

Apart from the unique designs there are other utilities which makes RUNI unique compared to other cards within the game. Although, the card will not be available in Splinterlands but it will have its perks. Runi will be minted in EThereum blockchain via smart contract. While its use case will be if the owner of the NFT stakes the card in ETH blockchain (more info will be released) Runi will appear within the game for gameplay. It will have all the usage of a regular card and will have all the benefits that we get from other cards.

How should I get it? What will be the cost?

Yesterday, there was a presale going on. Not presale actually but whitelist event was prepared by Splinterlands. Where there were 2000 spots available. If a user wanted to secure the spot they had to pay 100 vouchers. While I am not surprised how long it took for the users to get those 2k spots. Any thoughts? Under two minutes lol. Isn't that crazy lol.

It usually will cost $500 to mint. While during the event held yesterday the cost was reduced to half by Splinterlands for the HIVE community. Which is 2000 RUNI's cost $250 each and 100 vouchers. Since this is the minting price during this whitelist spot but the actual market value will be determined when Runi hits the market. If you have missed the whitelist spot yesterday, you can mint them on Tuesday, October 25th, 2022 at 2 PM ET / 18:00 UTC. As per announcement a user can mint as many as they want until the cap is reached. And the cost per mint will be $500 and gas fees in ETH.

How did it felt to secure a whitelist spot?

Honestly, I was literally shaking! But being on Splinterlands discord, it helped a lot. I was not sure what to do once the timer runs out? I got my vouchers in the account and I was just waiting for the time to run out. After several queries from other users I was sure to look out for the buy button down the page and I had to refresh and than go for it. I opened two tabs just in case. Although, it did help by the way. Clicked the buy button and it was just loading and loading! I felt like I was not going to make it. But after some time the below screen appeared and I felt much relaxed lol.

Now just have to wait for the minting process to arrive for whitelisted users.

Now coming to talk about all these crazy presales happening in Splinterlands. I honestly am very very surprised. Can you just imagine, how crazy these past few days were? Three presales and I wanted to get in on all of them

These are all accomplishments from Splinterlands. These successful events does indicates how dedicated the community is towards the game. All these are liquid money which were invested within the game. Some of them were to make the economy even better and more sustainable for the game. Hats off to splinterlands for thinking long term and also for the community as we speak.

Splinterlands announced, they are bringing a new asset within the game. That's it! People saw the announcement and specs regarding it, we are all ready with our money. Just take it! lol!

Just a little bit sad about @aggroed, I heard he did not made it to secure a spot for Runi yesterday. But I suppose he will MINT RUNI unless he gets his hands on as many Runi as he wants. Good luck on the RUNI!

Congratulations! Thats going to be awesome!

Thanks! Let's hope so!