On Wednesday 6/23/2021 the official Splinterlands Twitter account was met with the surprise of being suspended from Twitter. A transcript of the unfortunate news being first released can be seen screenshotted at the bottom of this article. There was no warning given just a straight up ban out of left field. Today (6/25/2021) Splinterlands has made an official response on the issue which can be read in full via Clicking Here

As the saying goes, "there's no such thing as bad publicity". The Splinterlands team has made the best of the situation via spawning a contest out of it. That's right Splinterlands gets banned from Twitter and they respond by rewarding their player base. The contest is a simple one and prizes are TBD. Click the highlighted link below to go to the official contest post.

A Little Contest - CALL TO ACTION!

We've (Splinterlands) decided to make a little contest out of this Twitter call to action. Show your support for Splinterlands on Twitter and share your tweet in the comments below this post. In a few days, we will select the most creative, the most humorous and the most engaging tweets and award their authors with TBD Splinterlands prizes. 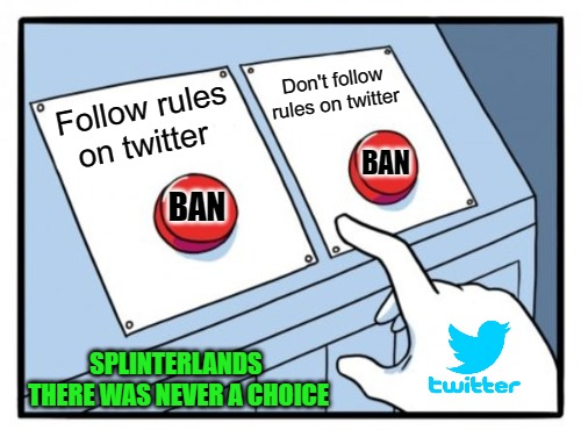 “This will only help us grow,” says Dr. Jesse Reich, co-founder and CEO of Splinterlands. “We’re thankful to the community for spreading our messages of in-game asset ownership and economic freedom even when we ourselves are silenced.”

Being blocked from twitter is like a rite of passage in the crypto world - it means we're important enough to block lol. We can all make a big fuss about it on twitter and get more attention too :stuck_out_tongue:

Other Sources That Have Reported The issue:

Give us your thoughts on the situation in the comment section below! 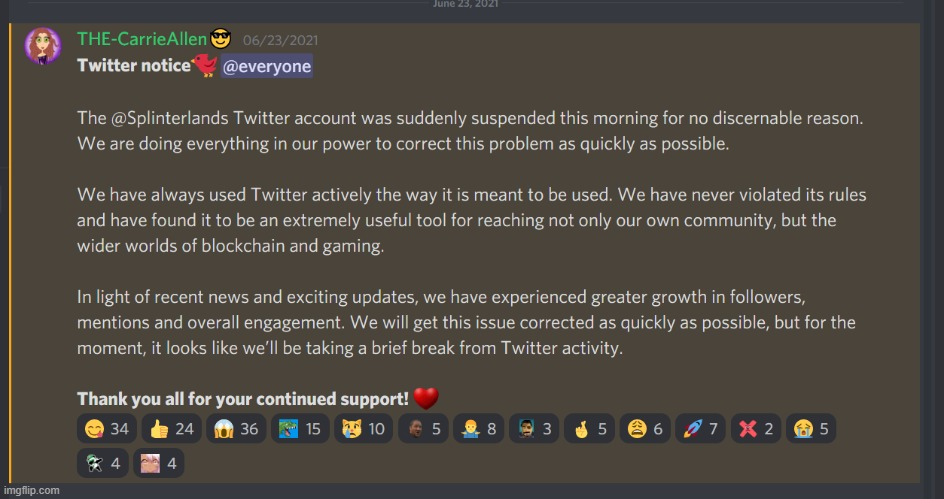 Congratulations @rentmoney! You have completed the following achievement on the Hive blockchain and have been rewarded with new badge(s) :

Banning Splinterlands from twitter just shows what a bunch of zealots they have running that place. I don't use it myself, only Hive.

I have a Twitter account but I can count on my hands how many times I have used it.

Most my social media content is right here on HIVE.

It doesn't make any sense, I guess it just shows that Jack Dorsey has a friend or two in the corporate gaming sector?

I have no clue how Twitter "report" function works but its possible Splinterlands was reported by other gaming companies to Twitter. Might be a sneaky underhanded tatic that competition would use?

Our organized action on Twitter to denounce this wrongful decision to suspend Splinterlands account will make a serious impact in the process to resolve this situation.

At the very least it should bring more attention to the situation and hopefully the game.

Crazy is right, thanks for the upvote.

Twitter banned the President of the United States. They could care less about you or anyone else. They are an oligarchy. You have no recourse against them.

You're mostly right but what we can do is use this as an opportunity to promote the Splinterlands game. BEER

Hey @chuckrick, here is a little bit of BEER from @rentmoney for you. Enjoy it!