Two (2) months back, I and both of my daughters went to Anime Fest at Bukit Bintang. Last weekend, there was a similar Anime Fest event, but the venue was at Paradigm Mall.

Paradigm Mall is only 15 minutes away from my house. I told my daughters that there is a similar event at Paradigm Mall. They were so excited to hear that and they told me that they wanted to go to the Anime Fest.

The Anime Fest started on 12 May and until 15 May. However, the first two days were not packed with people since it is a weekday. I went there on 14 May. We went at 9.45 am, and reach there exactly at 10 am. My eldest daughter went as Kuromi, and my youngest daughter went as Shinobu.

To my surprise, Paradigm Mall was already packed with visitors even though it is still early. I took the lift from the parking to the lobby. Once the lift door opened, I can see a long queue of visitors.

The only available menu was Flat Rice Noodle with prawn soup and BBQ Wantan Noodles. We spent around 40 minutes getting our breakfast. After that, we started to walk from the lobby up until level 4 of Paradigm Mall.

It was so crowded, that I didn't let go of my youngest daughter's hand. While walking, we stop for a few times, asking for a photograph with the cosplayer. Below is some of the cosplayer that my daughter has taken a picture with.

We spent around 3 hours at the Anime Fest before heading home. Both of my daughters were happy that they were able to go to the Anime Fest. There will be another Anime Fest end of July 2022. The venue would be at Tropicana Mall.

Tropicana Mall is a bit far from my house. From my house to Tropicana Mall, it is around 40 minutes of driving time. If I and my daughters were to went there, I will make sure that we went early.

Yay! 🤗
Your content has been boosted with Ecency Points, by @rosmadirazali.
Use Ecency daily to boost your growth on platform!

Hi hi.. bro.. When I saw this on my facebook, I had a feeling that you would be writing a post about it.. One of the cosplayers is from Miri... Wah.. your daughters must be enjoying their time with cosplayers.. =) If only I was there..

This cosplayer is a girl if I am not mistaken. Hahaha, this time the event venue is really nearby my house. So, must come 😁😁

My daughters really enjoyed their time. They wanted to go to the next event on August.

Was there any Deadpool or marvel characters?? Hahaha syiok ah at KL got such great events to visit... 😀😀😀

It was supercool event . There will be cosplay event in sabah nxt week. Maybe i need to think what char i ll wanna be also 😅😅

Next week? You should go, and don't forget to bring your camera.

Easiest character would be Ditto from Pokémon 😂😂. Got one cosplayer cosplaying ditto by wearing a pink rain poncho 🤣🤣

Yeah , i ll not forget my camera and enjoy the show. OMG , found this in pinterest . 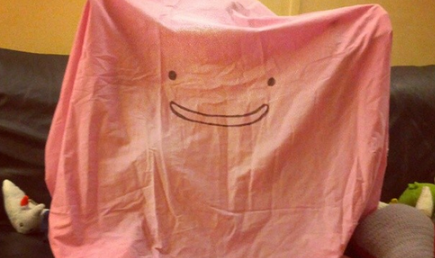 This year, got 2 times anime cosplay events at Sabah too but I was too busy at that time and did not join them even though the event place also 15 minutes drive from my workplace 😂