@rufans 69
about 2 months ago
LeoFinance 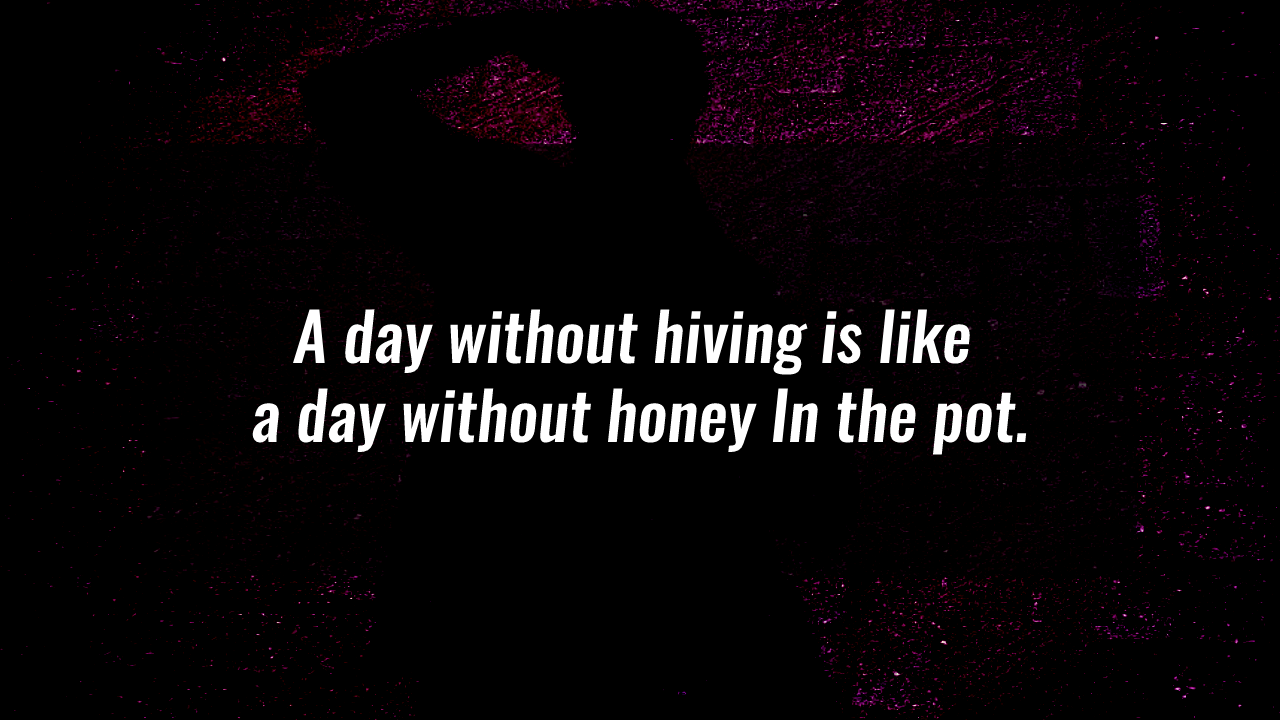 There is nothing known as "Perfect"

I have a few things heard that nothing in this world is perfect, but we’ll all agree that the fork of Hive off the Blockchain was a perfect one? Yes, it is! … On the 20th of March 2019, a land full of a hard-working swarm of bees buzzing(working) every now and then was created. Ever since then, content being generated on Hive blockchain and dapps being built on it have refined from good to better.

How did we do it?

...Next time you're faced with a choice, do the right thing. It hurts everyone less in the long run.”

When our former home was acquired by Tron’s founder, Justin Sun, it all seemed like the end was near. Activities were in opposite directions as powers which supposed to be used to encourage quality content authors were undelegated from communities. Even though the former ~~steem ~~ managements were lacking behind in their goals stated on the whitepaper roadmap, they were better off than the new acquirer.

To this day, I appreciate our able witnesses who came up with the idea to fork the blockchain.

How far have we come?

As a new blockchain, the $hive price struggled to show to the crypto community how scalable its blockchain is or how hardworking the devs are. As you can see from the chart below, it took $hive 9months before we started noticing an uptrend in the price movement/printing green candles. 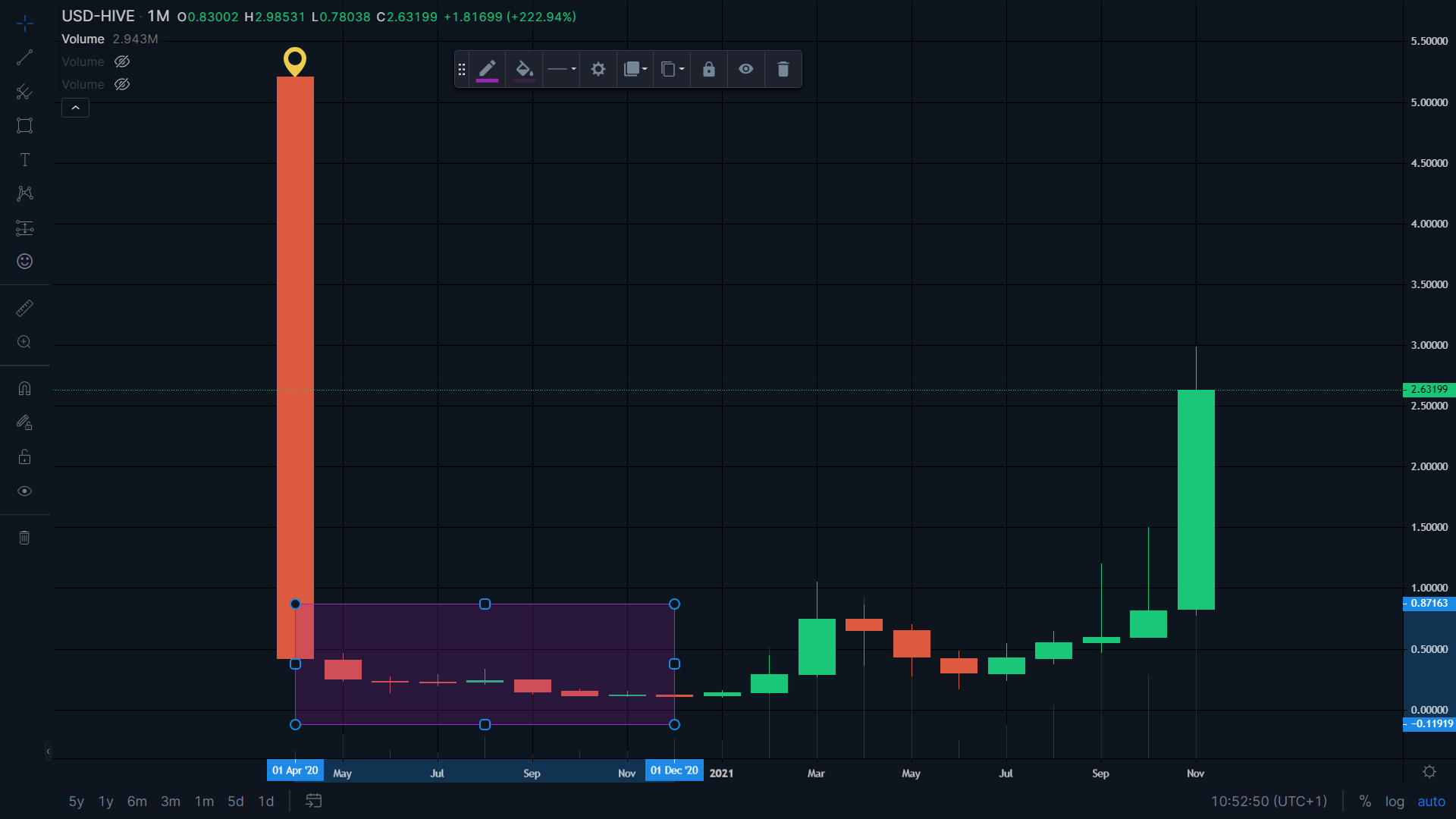 However, as it was, I didn't put blame on the hive price movement or the activities on the blockchain, because its chart looked similar to other coins in the market at the time.

The crypto bull market seems to have begun in the last quarter of December 2020 and Hive wasn't left out as you can see from the chart above.

For three months straight, the crypto market was up and it needed little retracement for another leg up. The retracement was recorded from April till June. The price movement was the same as the $hive price. The correction was fair enough since it was 3 months up and 3 months down. 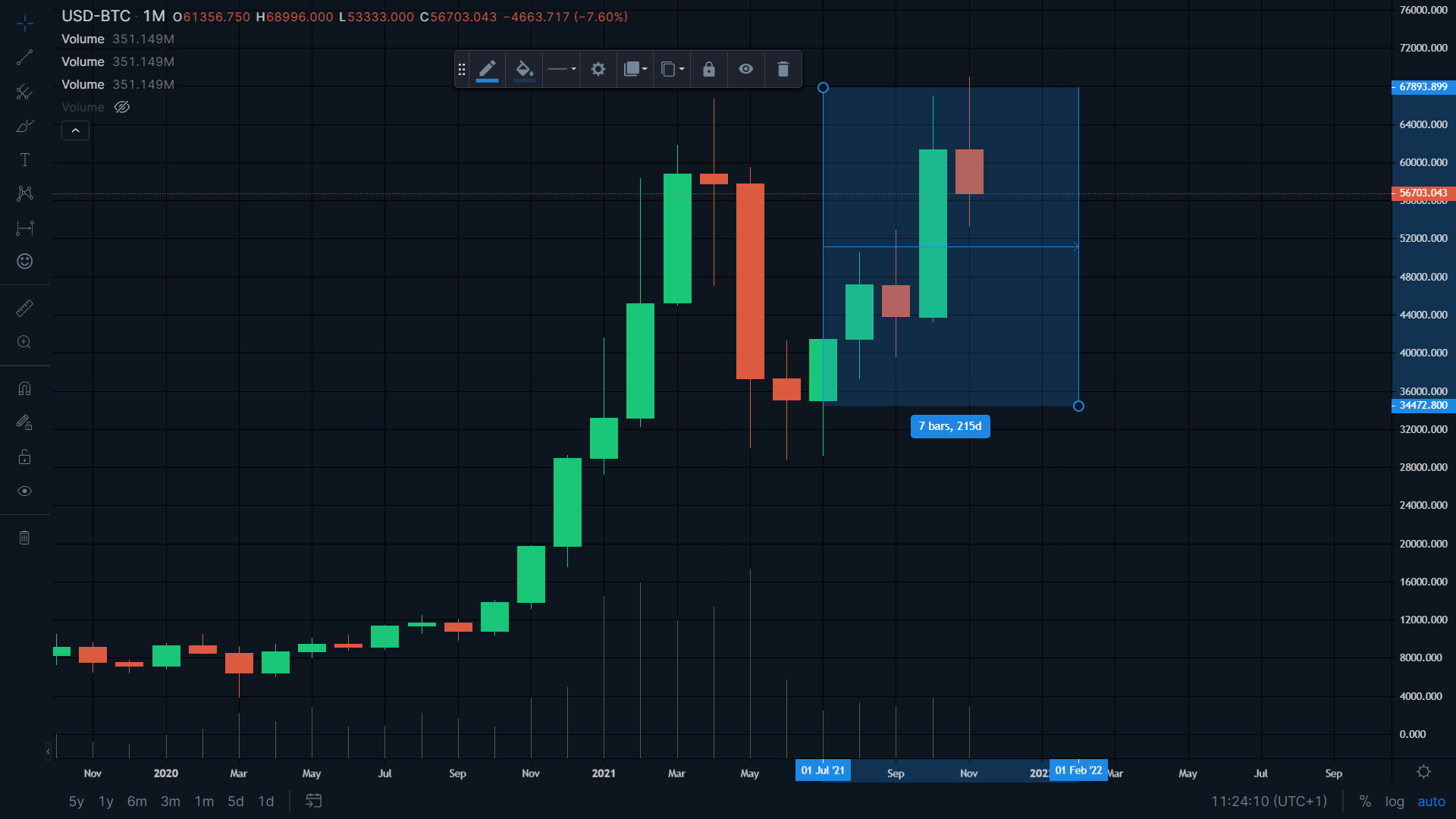 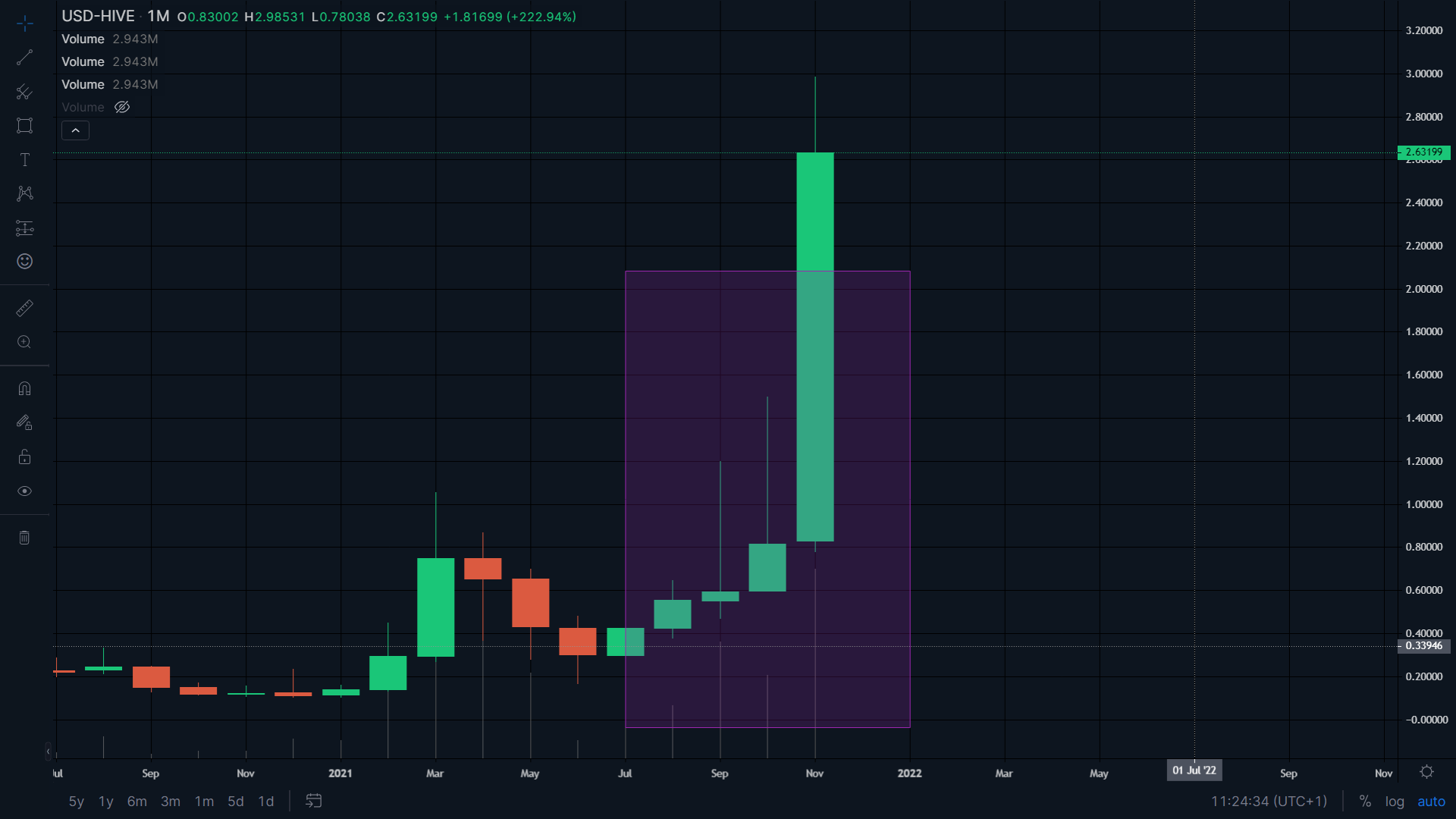 Bitcoin, the crypto coin’s master, and 90% of other coins found their bottom on the monthly chart in June. The month of July 2021 was noted as the recovery month. This fact was still the same with $hive price as it got ready to prove itself to the crypto community.

As displayed in the above image, $hive still hasn't printed any red/weak candle since July 2021.

What has kept Hive going?

The answer to this question ranges from different dimensions which include the pros of fully migrating from centralized to a decentralized blockchain, the rate of quality content on the chain are created and shared on other popular platforms, and most especially, the Dapps on the Hive blockchain. For example, SplinterLand a play to earn Dapp on hive blockchain also launched its native token in the same month $hive started booming. Splinterlands (SPS) token rallied 318.3% two days after launch Another massive news on splinterland went viral earlier last month when a Splinterlands Card Sells for $50,000

The Hive blockchain currently has smart, intelligent, and hardworking devs, marketers, and content creators. Everyone on Hive has got the same goal in mind making it easier to scale together as a blockchain. By the way, Hive's success story started when the blockchain adopted the decentralized mechanism. This move alone encouraged a large number of investors to put in their money into the several Hive Dapps built by the brilliant devs discussed above.

The hive blockchain is less than 2years old but has archived what most existing blockchains before it couldn't achieve.

We are like a swarm of bees, we've believed in the process since day one. Our Hive is filled with intelligent developers who are ready to build top-notch Dapps. The content creators on the other hand are developing quality content on a daily basis. A day without hiving is like a day without honey In the pot.

Yes it is true,hive has become like social media

Hive to the world, it's really amazing seeing the changes occur than what it is before with better changes and improvement still yet to come in the blockchain.