Recently I commented on a post by @memeisfun - Staking 1160 POB + Apologies to the POB community where he revealed that he was muted by the @hivewatchers and expressed his feelings regarding the once and forever judgements that are enforced on Hive without any leverage of mending mistakes.

I have read his content, and I found it to be original. Though I haven't verified every post but his writings does have a distinct feel and contain original information. It's so obvious that you wouldn't even need a check to conclude this.

But as you can see from the discussion below. He accepted that he had plagiarized before and felt sorry for me for complimenting him. Must be because he realizes that he has done something wrong. But I haven’t regretted complimenting him because actions of humans inherently are not an epitome of good deeds anyway.

Marina Abramović a Serbian performance artist once conducted a social experiment - 'Rhythm 0' - on stage performance in front of a live audience.

Where she deliberately sat still with a hand picked collection of 72 tools around her ranging from the pointiest to sharpest and even instantly fatal objects. And for next 6 hours everyone from the audience was allowed to do anything to/with her using any of the tools.

The results were disgusting. First few hours passed with ease and some fun. But it ended with lots of scratches scattered over her body. And torn clothes and teasing and molestation and people trying to hurt her private parts. She was treated like an object.

After the experiment was over and she started moving, people ran away. They didn't want to confront her or show their face. Disgusting.

And it proved that people are capable of turning into worse than animals if there are no consequences.

Studies have shown that each one of us would lie, cheat and steal if we can get away with it. If we would be sure that no one will ever find out.

In the hindsight, human civilization was a bad idea.

Our mistakes aren't always unintentional. They are planned and deliberate efforts a lot of times. But I think it is ingrained somewhere inside all of us.

We all are made up of mistakes and dragging the baggage of some. Maybe in different forms and contexts. And may be even worse than being a plagiarist.

If we are ready to amend or have already course corrected things, not mere to reverse the consequences but to find and comply with the healthier motivations. Because we don't want to manifest the wrong or get recognized by our misdeeds. There must always remain a scope for forgiveness.

So is that all simple about all our mistakes? Of course not, that's why we have a variety of punishments and penalties for a variety of actions. But it's not that government is just catching the culprits and sentencing them for life even for stealing 100$ worth of items from a departmental store.

If your child steals money you wouldn’t evict him from your inheritance. You just become more watchful. And then again if he lies about his expenses. And then if he gets himself kidnapped and frames you for ransom. You most certainly would.

An evil someone will still make a different account, will still try to spin the content, will come up with ways to not get caught and will probably also create bots to do all this.

To all the others at hive who are the victims of objectivity. Who have been tagged as an offender and abuser forever. Who had lost their path for a while but are trying to follow the right motivations. You all have my support, and hopefully other member's too.

And you aren't a bad influence for this platform in any way. In fact you are an inspiration that it's never too late to mend. And that what matters is who we are inside and what we want to become, rather than what we end up doing sometimes.

If such sensitive things would be decided objectively. Like whether to permanently restrict someone from a “so called” uncensored decentralized public resource or not. We probably wouldn't need humans on this planet and only blockchains.

What is ‘wrong’ anyway, I wonder.

Most of times its just the perspectives and prerogatives, I feel. You've got an interesting take on things, but we haven't seen any evidence. Until then, as far as I'm concerned, business as usual. I imagine any workgroup responsible for system traffic is going to be busy. It's going to take some time to get resolution. I've been told that eventually the bot can drop off, but it may just be better to contact the group responsible for it. And then we wait.

I told him that everyone makes mistakes. It happens and it's best to move forward from it.

The thing is not about evidence, or about getting at a resolution fast. The thing is the objective treatment of any kind of stealing with permanent mute. There’s no harm in appropriately punishing people, banning them for days, weeks and then months progressively or based on the degree of the offence or robbing rewards of their multiple posts etc. Life imprisonment without any system in place to make an appeal must be the last option.

People must be given chances to be a better humans unless they are involved in something like human destruction. Or the world will become a very shallow place. Well mods might be busy, but they seriously need to reconsider where they are headed and what their efforts and decisions are costing the platform.

I say fuck em!
You're right about humans being so messed up and stuff and maybe some punishments do not fit the crimes in our societies but when it comes to Hive plagiarism is the greatest enemy of the platform and should be punished with extreme measures, especially as a lot of plagiarism can go unnoticed, the few times it gets noticed it should be hit with a heavy blow.

At the same time I support whoever is trying to turn away from plagiarism or whatever they used to do that was wrong, but the fact still remains that they deserved the punishment they got in the past. They got my support but fuck em for the past.

I agree that we shouldn't leave the culprits from being punished either. And they should always have some consequences and I also don't have any soft corner for their past deeds. Not having any consequences will only encourage more of such activity.

I appreciate you kindness in the support of those who are mending their mistakes. And yes, I also believe they deserved it.

Also, here is something you should see. 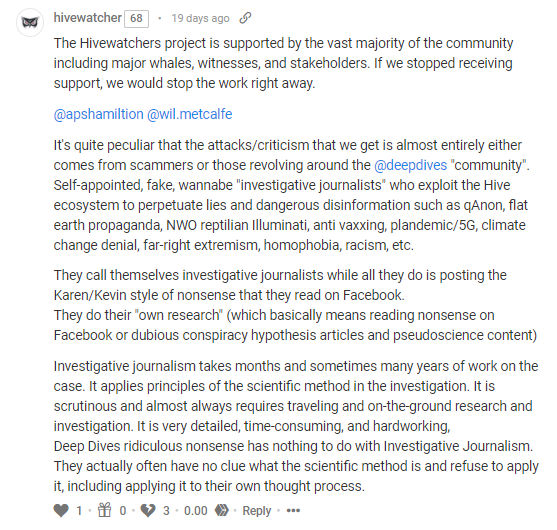 Though HW claim that this was out of personal frustration, and they look for plagiarism and don't take down users for their ideological inclination. But can we guarantee they don't have a political agenda? if the watchman is watching us, who is watching the watchman?

So even moderators can be biased and make mistakes and they are not infallible. Its really hard to judge anyone
based on just limited information or actions against them that we come across.

Like I said it's all about perspectives and prerogatives at times.

Thanks for sharing your opinion and views

This is all a longer discussion so I'd just focus on the following:

And is the indefinite mute the elder's wand for all kinds and degree of plagiarism problems at hive?

I'd say YES but temporal muting in minor cases. Because like I said plagiarism is the greatest enemy of the platform.

I don't favor indefinite muting except in extreme cases. Also, plagiarism can be spotted and mended, objectivity in punishments is hard to. Try to correct the guy holding the gun 🤡.

Well, since you're saying it should depend on the degree of plagiarism we are on about the same page, bro👍

Haha yea, may be you would too find a softer side for hot chicks 😜

Here's some !PIZZA for you

@nevies! I sent you a slice of $PIZZA on behalf of @shubhwaj.

These are VERY relevant points about redemption and what the difference is between doing evil as apposed to being evil.

Intent does matter and mistakes should have a path to recourse for the remorseful.

Unfriendliness in all its forms is an action taken, be it unbeknownst but especially if it is beknownst in nature and implemented at a systemic level by a “trusted” entity.

Unfriendliness. It’s something people do... be they regular accounts or the likes @guiltyparties @spaminator @hivewatchers @hivewatcher.

The response to a miss-step or even a transgression with intent matters just as much as the actual intended or in-intended miss-step or transgression. HOW we go about something says a lot about our character and even insecurities no matter how hard we attempt to hide them.

These dishonest constructs and ways of thinking can and will end up producing poor and unfriendly results that harm all of us.

Unfriendliness in all forms... is evil. SOURCE
👆Now what should happen to me if (god forbid!) I would have rushed and forgot to include the code and html linking back to the source of this picture and quote of my hero Mohammad Ali?!

Should I be labeled forever unless I go crawling into the authoritarian halls of @hivewatchers discord to apologize before a self appointed court?

What would Mohammad Ali say about this?

Would he point his mitt my way and accuse me of steeling his words and likeness?

Or would he thank me for spreading Good Ali around the world?

I’m not condoning the plagiaristic and damaging actions of some on this blockchain...

But I am saying that HOW we arrive at such a determination and HOW we deal with it has absolutely got to matter as much (If not more!) if we are to truly evolve and levelUP HOW we human on this blockchain.

History is chalk full of lessons in this regard... and not all of them are a picnic in the park!

We best listen and learn what we can from the past and from each other.

That’s what feedback and intelligent design is all about!

And now, as we innovate the future with Hive, it matters more than ever before!

Thank you for writing so insightfully and in such a caring way.

Your human approach means that we can, if we are truly honest with ourselves and each other, put down our stones and preserve the best things that we love about our blockchain!

@wil.metcalfe
P.S. I don’t think a proper response to permanent and automatic implements on “flagged” behaviour (without due process) can be deemed correctly without the right to representation.

...and on the Hive Blockchain this level of governance should be handled with DPOS.

Isn’t that the whole idea?

The community gets to decide what’s “right” and “wrong”?