The Eureka! That Saved My Life 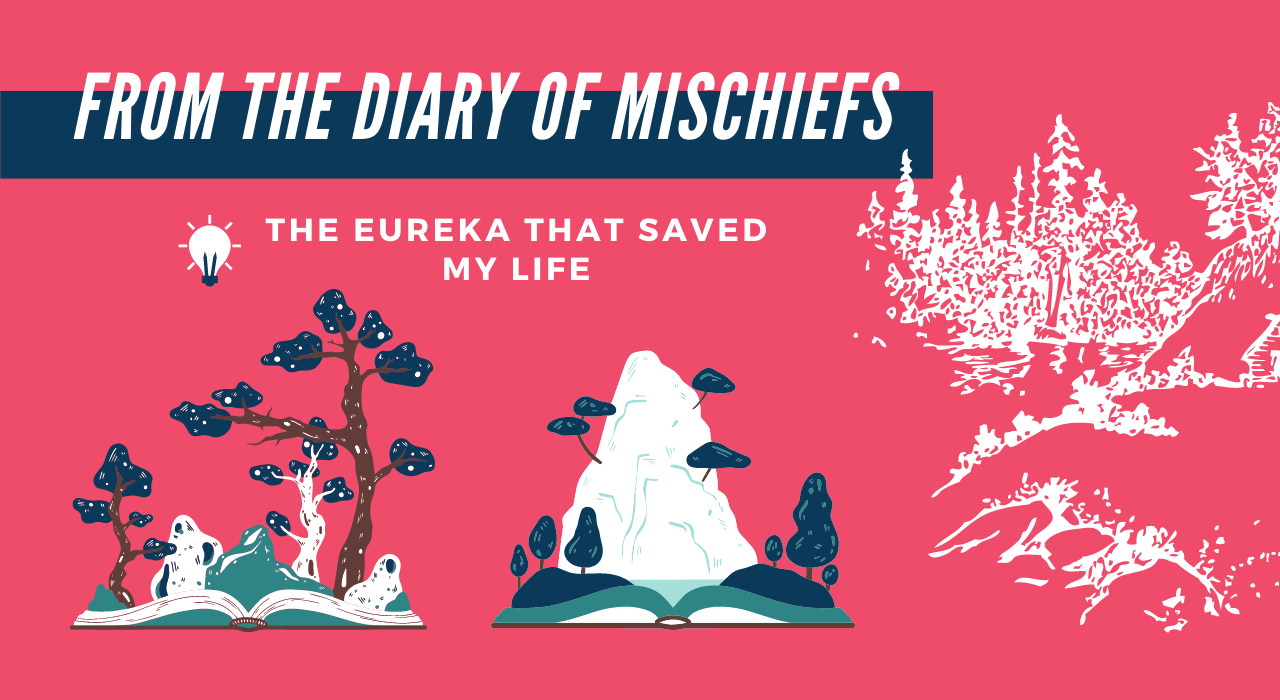 I could barely take two steps continuously, then stopping and bending forward putting my hands at my knees. And breathing so heavily. Gasping. Trying to take in every molecule of oxygen present around.

It all started with a beautiful sunny day. The kind of days you have when you are on a vacation with your bachelor best friends.

Carefree and careless. Ready to seep in anything coming your way. Experience.

I and my two college mates planned to visit 'Auli'. It is a ski resort and a hill station. Situated at almost 9 hours of tiring drive from New Delhi.

It remains covered with snow for most parts of the year and people from all over places visit there to ski. And learn skiing.

But we landed there to take pleasures in. To get drunk in the mountains and make goofy faces. And then humiliate each other, roam around. And have fun.

That’s how most of the youngster's entertainment begin in India, from Vodka and ends with whiskey. Sometimes puke.

It is that time of life when you start to have enough money to run down rivers of beer through your throat. And you still won’t budge.

The prime years of youth. When your body can digest alcohol better than mineral water. And you can gulp 4 meals of Mac'D a day. Or Maybe survive on just potato chips. Who cares.

Live in the moment. Its just all so thrilling. Until it is not.

Our first day went in driving and arranging accommodation. We were too tired to do anything but drink and sleep.

We stayed at Joshimath, Auli still remained 14km away by road or 800m by air-tram.

Air trams are the life savers. And its the only way to reach 'Auli' - a very small village with no connectivity - during peak winters when the roads are laden with snow.

Enjoying our first experience of the air taxi we reached at Auli. Excited. A grand lake welcomed us. With mountain peaks all around.

Everyone started moving towards the lake and beyond.

The area has 4 ski tracks. And it takes 4-5km of short hike from the tram base to reach there.

The second and third guy from the left in snow boots were the fellow travelers, who joined us along the way. And then more snow balls and more fun. After almost two and a half hours of hiking, which seemed to be over pretty soon. We were greeted with snow covered peaks and mountain ridges and clusters of clouds. Everywhere.

It felt like whole of the earth was decorated with a white carpet, while the snow reflected the sunlight making it shimmer. Beauty.

No one was skiing. There weren't many people either.

Then we all climbed up a ridge and sat there.

And we shared our vodka, then life, and everything else we carried. Also the baggage.

Booze, fun, laughs... cheese... and then CLICKs. Life couldn't be any better.

Before 2:00 in the afternoon, we were full of energy - sliding, jumping, hopping over snowy rocks. A bottle of 'Magic Moments' was showing its magic. Unstoppable.

And soon we decided to climb down. Though the last tram left at 4:45, we still had almost 3 hours, and it was hardly an hour of walk downways.

But we wanted to spend some time near the Artificial Lake. It is the one of a few man made lakes at this high elevation, to provide snow for ski tracks. We planned to capture it and get clicked there.

Within a matter of minutes the walk turned into sprints and runs. And then bombardment of snowballs and chasing each other.

My friend slid down an entire slope and then I did and the others came running behind. It only went more reckless for another twenty minutes.

Until one of us said, "Where are we?" And we realized that we were moving through a forest instead of a paved path, and no one knew since how long?

Someone said, "we are going fine." Someone rushed and looked behind and said, "I can’t see anyone around."

Then screams and shouts. “Help!” “Can anyone hear?”.

And it didn’t take us long to conclude that we were lost.

Silence and despair. Followed by panic and fear. Lost.

One of us pointed at a hut far away. “We should keep going down, we might find someone there”.

But it was just a wooden structure without even a door. May be an animal shelter. And it was far away.

We had partly filled bottles of water and nothing to eat. And nothing to save us from freezing temperatures of night.

Our socks were wet and our shoes were full of snow and cold. We three didn’t even rent snow boots. As one of the Einstein’s mind among us said we had alcohol to keep us warm. And no one questioned. It was meant be a casual short hike anyway.

One of the other guy screamed, “its best to trace our way back as fast as we can. If we want to get back in time”.

And everyone agreed. It was the only hope and the best we could do.

We still had 2 hours left to catch the last tram. And we started to climb up again.

But hardly 50m into, the hell broke loose.

The slopes were so steep, we didn’t care while running down.

I would literally stop after every two steps to catch my breath. My mouth was desert dry. And head was dizzy. Disoriented. I wished someone could carry me and take up there.

I was going to die, I thought.

Everyone was struggling. Stopping or sitting or lying down with heavy breaths after every few meters.

Soon the clock showed 4:00. It already started getting darker and colder.

The guy who was leading ahead of me yelled something and sat down.

I rushed towards him, we still hadn’t covered this incline. And another slope revealed itself. Less steeper but longer.

We didn’t know where to go. And what to do.

I was exhausted. Three of us were still trying to catch with us. I could take it no more.

No one of us could. We wanted it all to end here. Too tired and hopeless to even say some words.

And my whole life flashed in front of me. No one counts how many people came up here. Maybe even my parents wouldn’t get to know what happened to me.

It has been most frightened and helpless I have ever felt, even though I wasn’t alone.

In this world overflowed with tech and resources, we rarely come across situations where our survival instincts kick in.

When you actually feel how blessed you are for being alive. When you get to experience how fragile life is. And how just little mischiefs can mean a tragic death in woods. Without you ever anticipating. Without anyone ever knowing.

I don’t know what kept me moving. I can't remember what I was thinking at that time. But I kept going, as slow and steady as I could.

As soon as I climbed the complete slope and went above the small ridge by our right. There was this large piece of uneven land going down towards the right. And it looked familiar.

Quarter a mile ahead in the same direction I could see some people walking away. And it was my Eureka! moment. The ordinary sight of people.

It wasn’t a scientific discovery but I found the hope to stay alive. To get back home safe.

With all the energy I could assimilate, I shouted “Help!” and “Stop”. I could see that a face turned around. And I shouted again. And again. Until I was sure I had the attention of everyone.

And then then I sat, almost lied down. Sighing and puffing air out of my lungs.

I sat there till others arrived. A gleam of cheer marked all our faces. The people waited and waved while we rushed in joy towards them. Hopeful again.

Not far away. We ran. Reached just 5 minutes before. Even more joyful was the ride back. Somehow.

The lake remained unphotographed. But then may be some things are meant to be. A great adventure indeed! And what magnificent views!

Many thanks for your remarks and stopping by 🙏. Also have some !PIZZA

@aiuna! I sent you a slice of $PIZZA on behalf of @shubhwaj.

That's one movies are made off
I can imagine the gripping fear
So glad you are here to tell the tale :D

True, it was kind of experience i can’t forget. When we friends meet, we still remember and think about so many things that could’ve gone wrong if we had to spend the night there. 🥶

Thank God, we didn’t have too. All well if it ends well.

Thanks for the kindness and stopping by, Have some 🍕 !PIZZA 🙂

@kaerpediem! I sent you a slice of $PIZZA on behalf of @shubhwaj.

While reading through, it was asif i was there, I could imagine the experience.
The only thing that would be thought of was last chance

Thank you for sharing how you felt connected to my experience 🙂. Here is some !PIZZA for you.

@timmypat! I sent you a slice of $PIZZA on behalf of @shubhwaj.

This is amazing post friend, glad to see this one in Trending 👍. Exciting experience ane how well elaborating and exciting details. You are a good blogger for sure. How do you write such good length post? It's a heavy task for me, lol. Bcoz mostly I do short poems so I am habitual to it. I must complement your hard work and efforts. Keep it up and be consistent and engaged. Make us proud friend, it good to see fellow Indians growing on the platform. 😊👍

Thanks much for your amazing and kind words buddy. And its a heavy task for me too, lol. Maybe the reason I am unable to post too often. But I also think i write super slow 🤓. I do also read your poems. And you are too doing awesome. And I am sure It will only get better. Just keep on it.

Thanks for all the appreciation 🙏 I wish the very best for you. also have some !PIZZA

@vikbuddy! I sent you a slice of $PIZZA on behalf of @shubhwaj.

Wow! Such a wild experience, @shubhwaj!