We had endured a particularly bad start to the day. A time capsule that would be known as 'Ernie's Place' was supposed to be open.

Our intelligence was only two days old, but it now was quite sealed. Either 'Ernie's Caretaker' was very efficient or some bastard had deliberately told lies to @anidiotexplores. 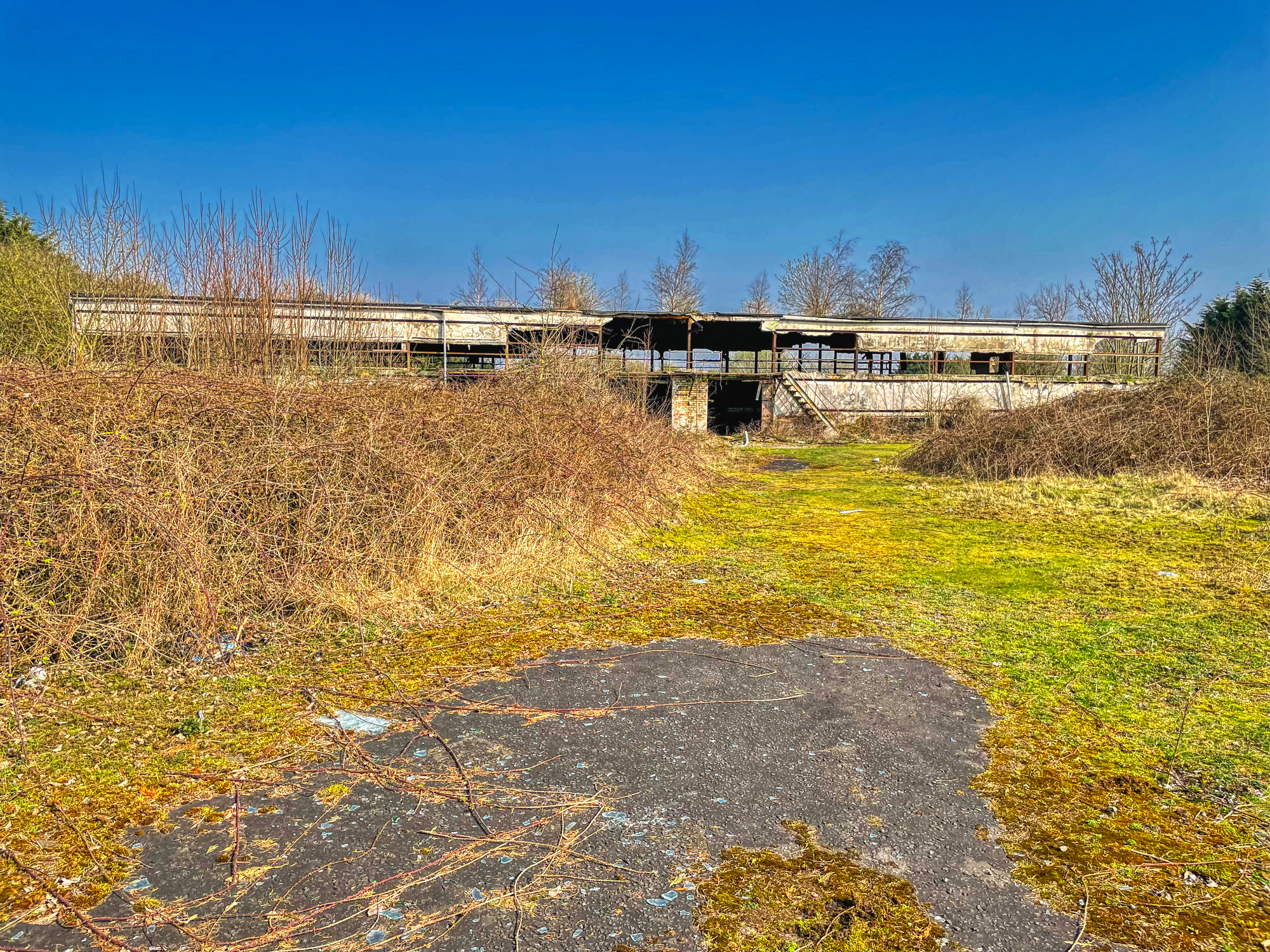 This is the toxic world of Facebook Urban Exploring and its sentiment of premeditated misinformation. It’s a good reason to distance myself from the mass idiots on there, and I don’t mean @anidiotexplores.

“I know of a POW Camp and a Detention Centre”, piped up @anidiotexplores helpfully. We were 15 miles out and had to make the most of a bad start.

We made for the POW Camp which, to be honest, sounded like a 'bore explore' and hoped.

Despite other explorers naming ‘Penketh Heavy Anti Aircraft Gun Battery Station’ an ex-POW camp it was never actually used as one.

History reveals it was used in World War II, but not to house prisoners. With the cold war looming and the threat of nuclear war by long-range enemy bombers carrying nuclear weapons, it was decided to refit the Penketh gun site out to the 1951 igloo scheme.

With more advanced weapons arriving such as surface-to-air missiles the site was disused and closed in the early 1960s.

Closed since the early '60s, what could possibly be left besides derpy buildings, graffiti, overgrown brambles, rusty barbed wire and the odd human decomposing body? Having nowhere to park besides next to the entrance we did just that. The road was not exactly busy with few buildings about, just the way I like things. 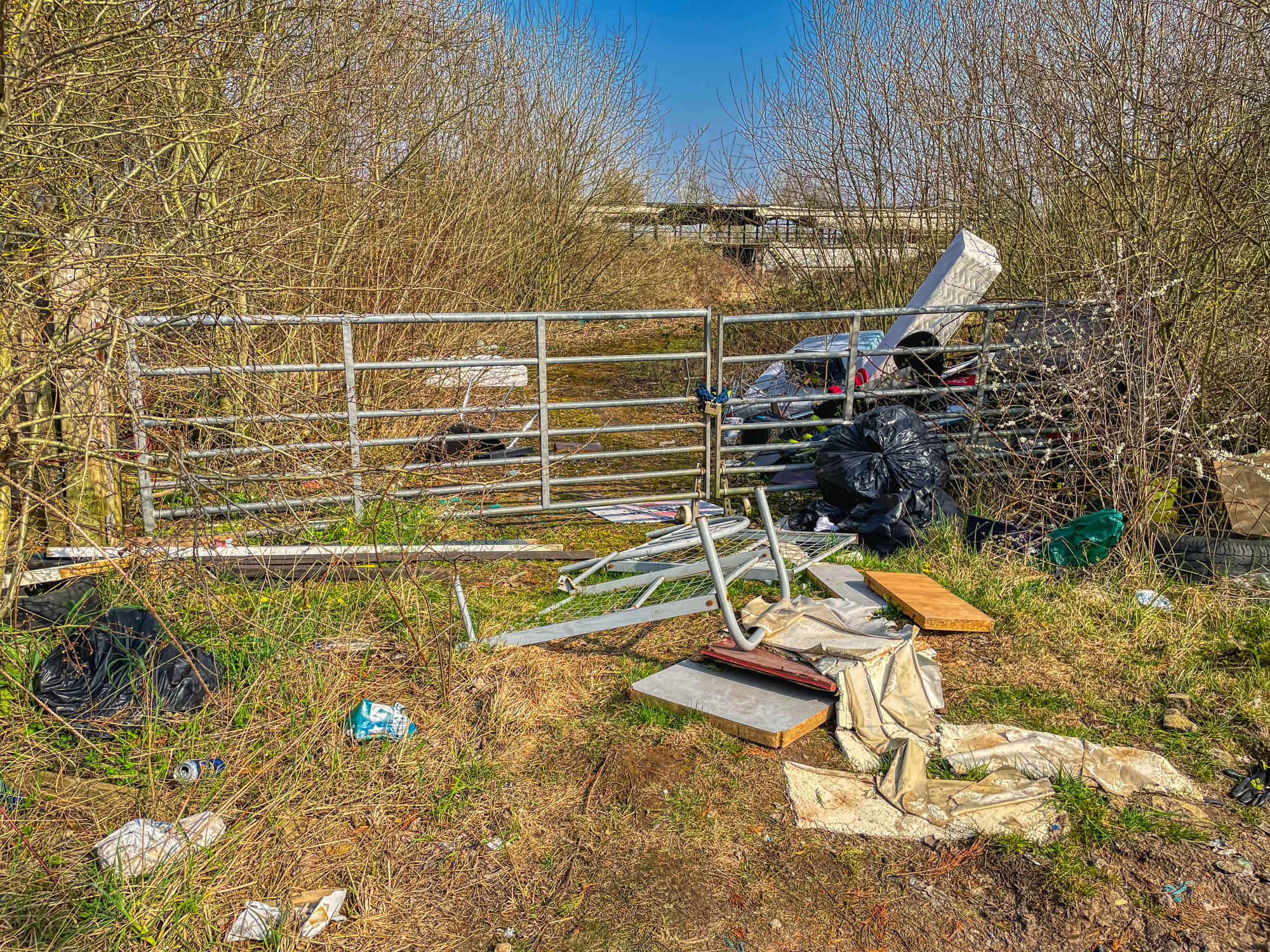 I noted that someone had been fly-tipping their crap. Vaulting the gate was not exactly difficult and we were inside in seconds. It was not going to be a fail but hardly looked sparkling from here. The map I discovered does not mention the most prominent building, a concrete-built two-storey affair, just above (8) and now full of… er nothing. 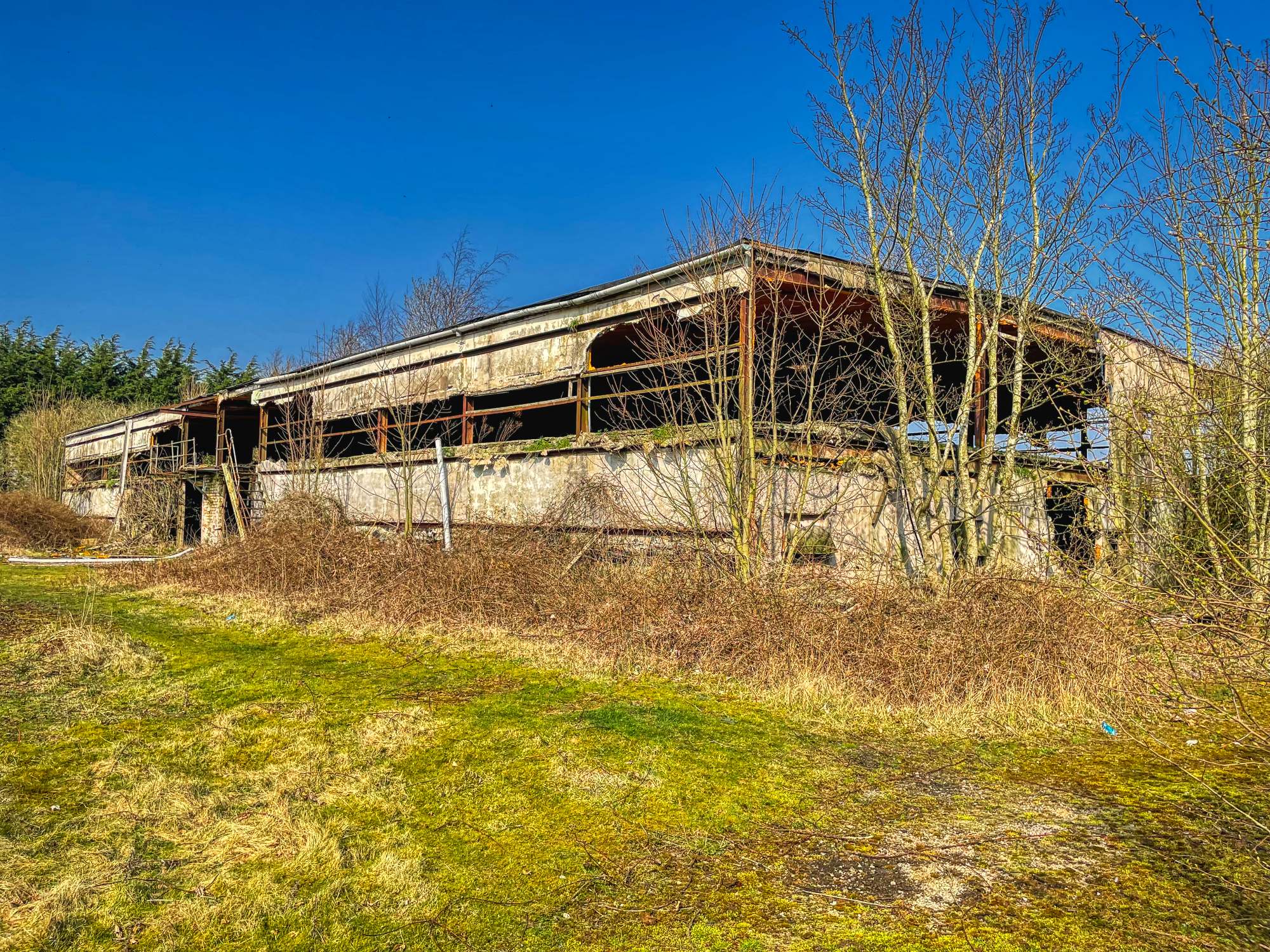 I was surprised to see the brambles cut back, and walking around surprisingly easy. Surely there was no gardener? 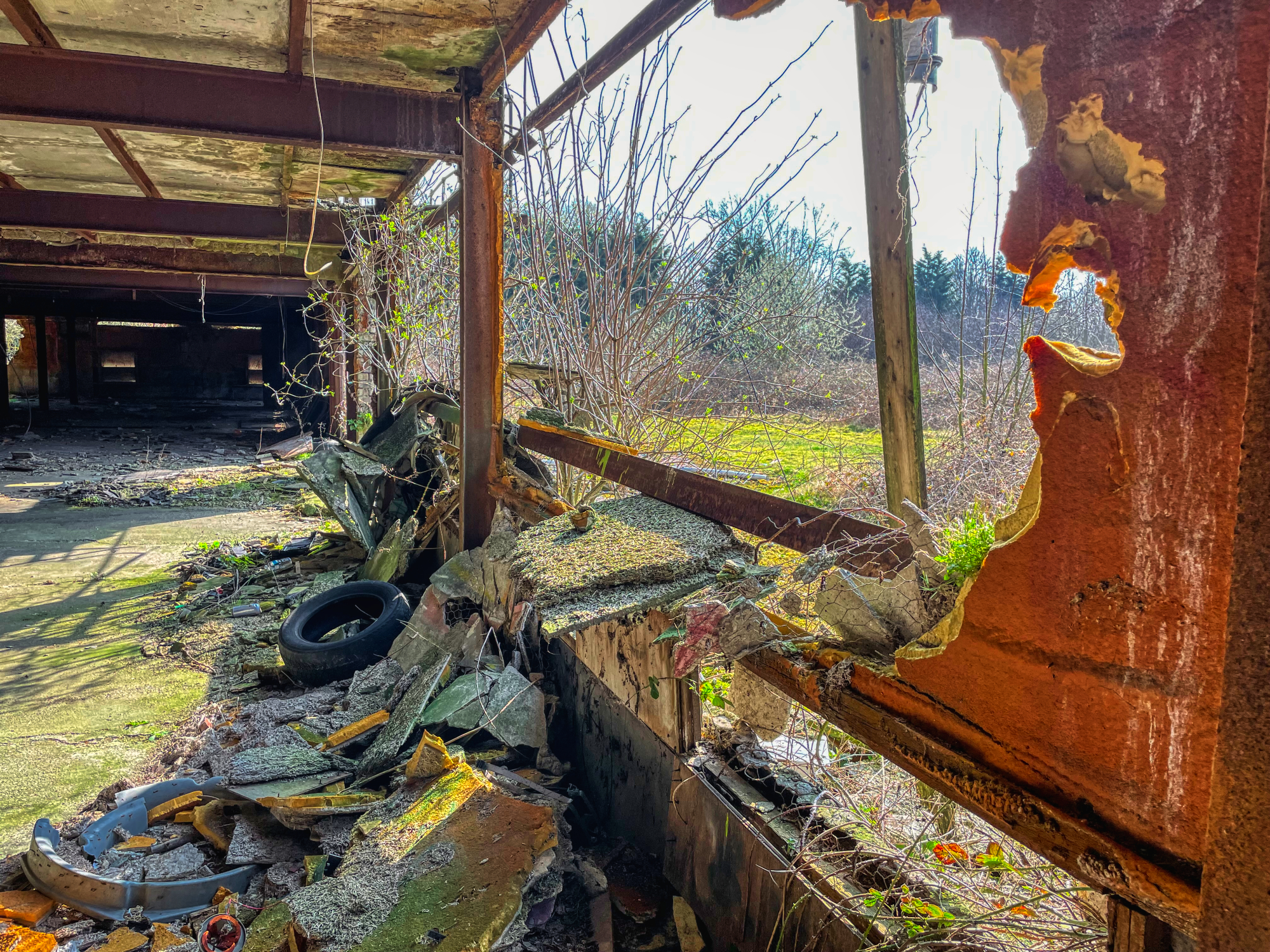 Access to the main building was simple as whole sections were missing on the ground floor. 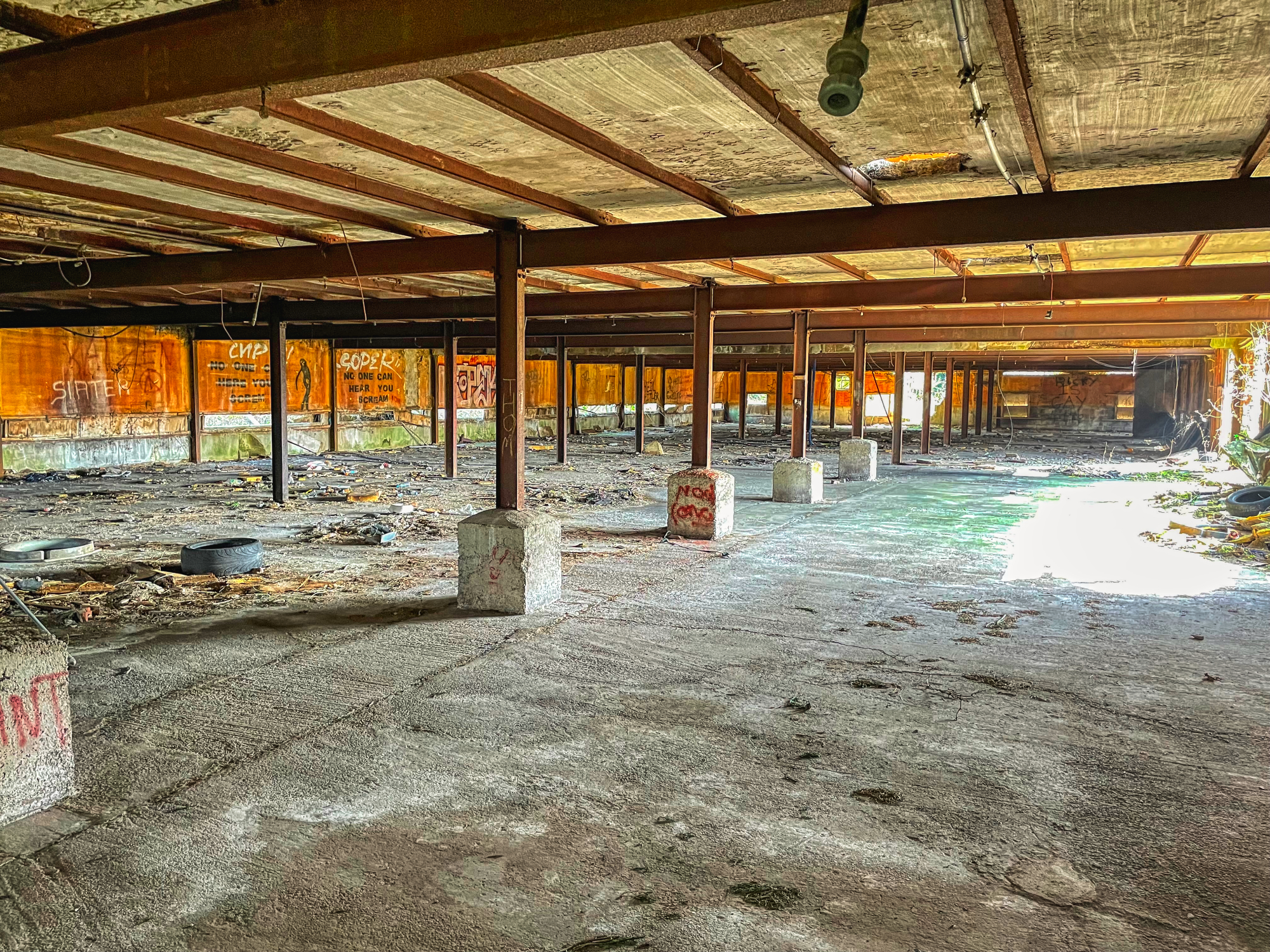 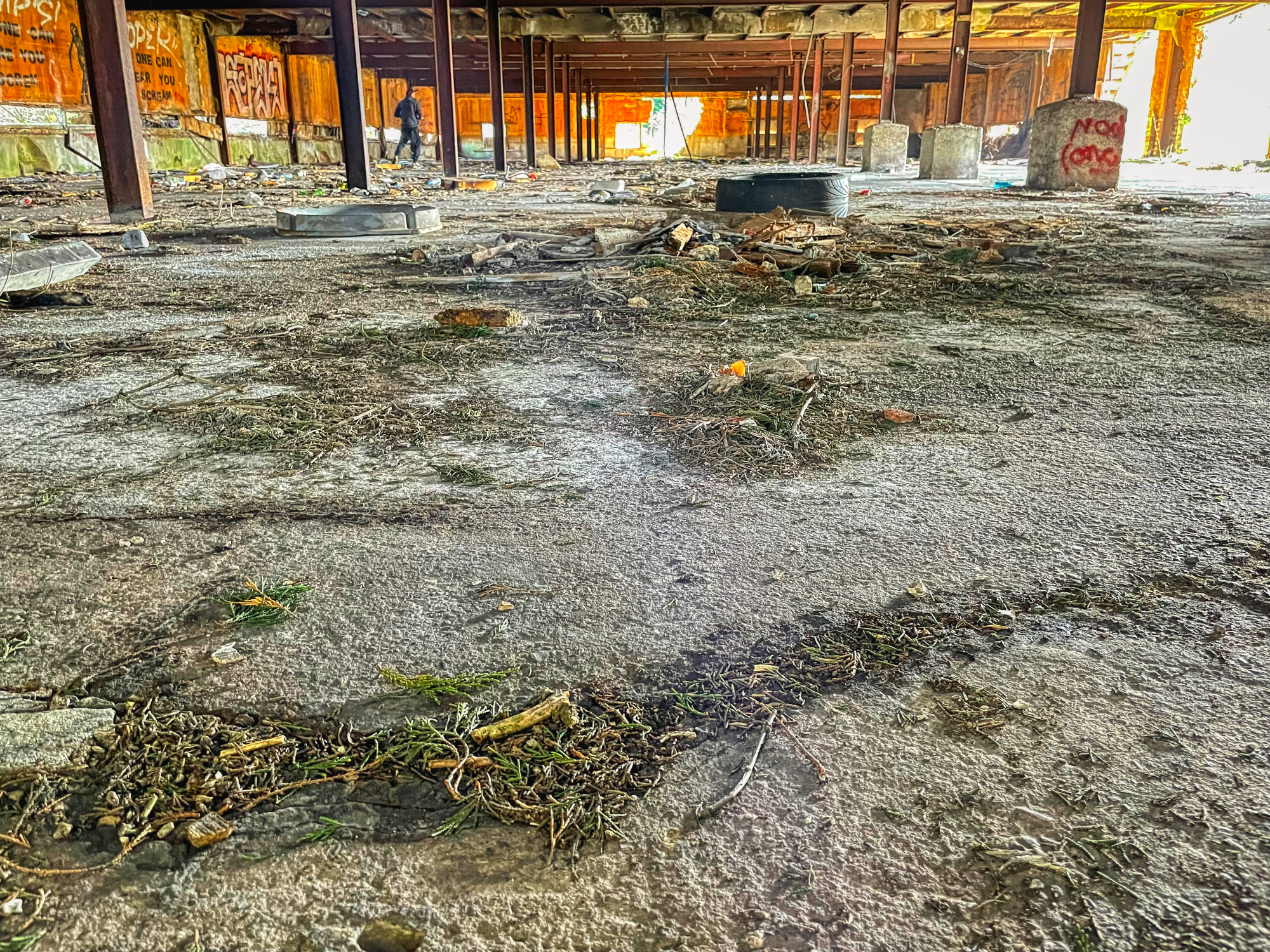 Inside was quite bare but sported some graffiti. I got a little closer to check it out. 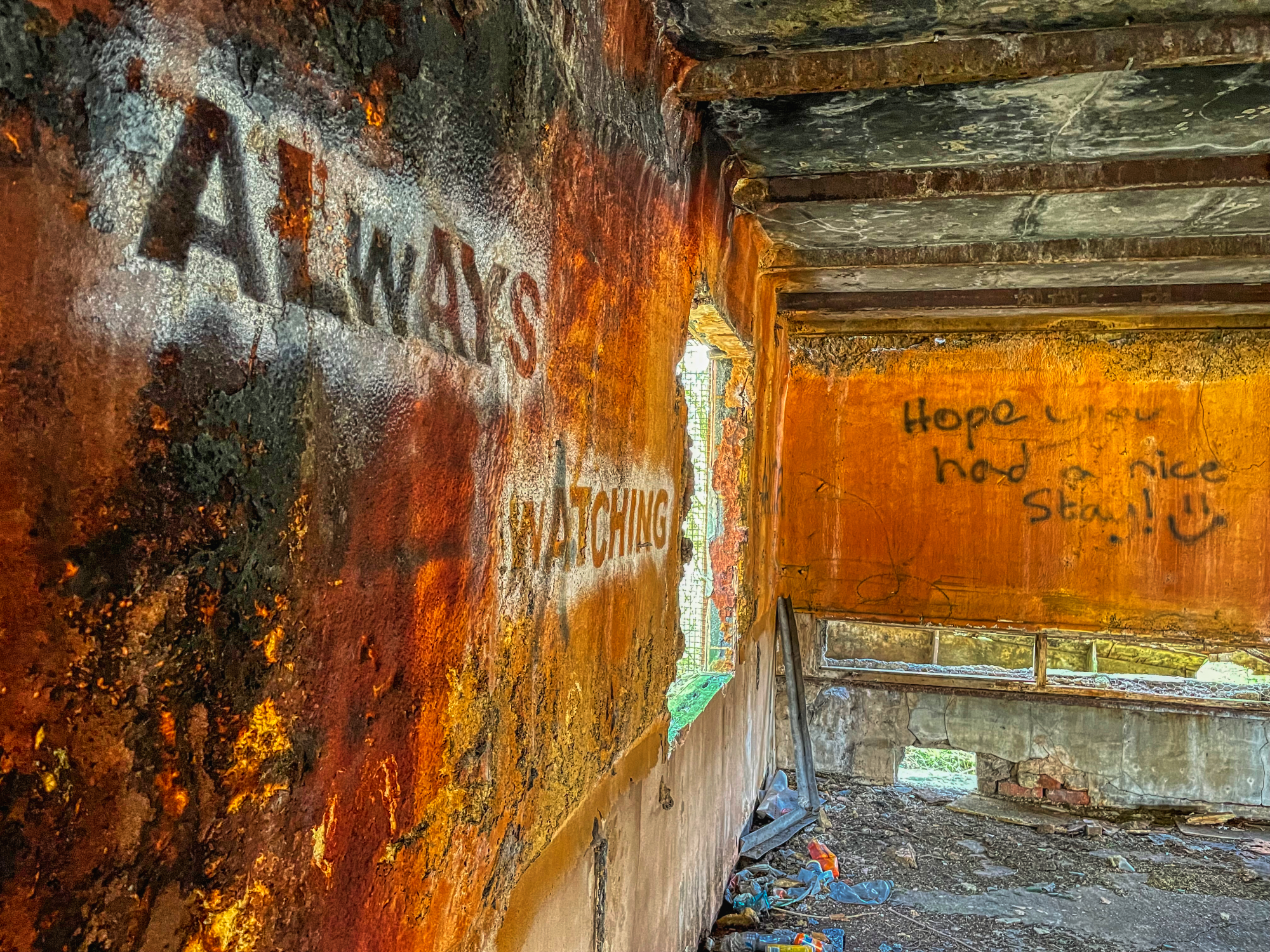 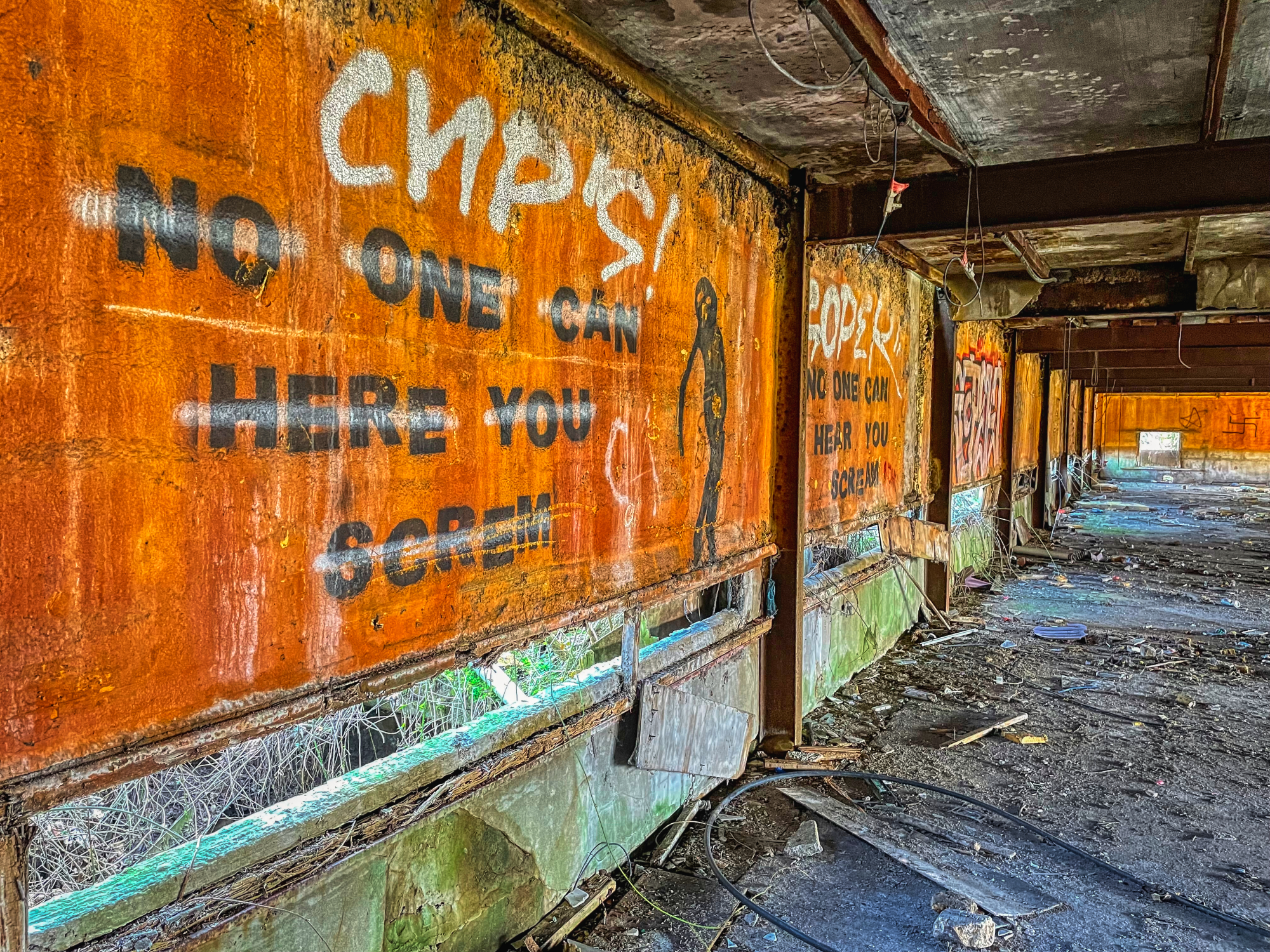 Using stencils to spray paint, isn’t that cheating? I could have done it. 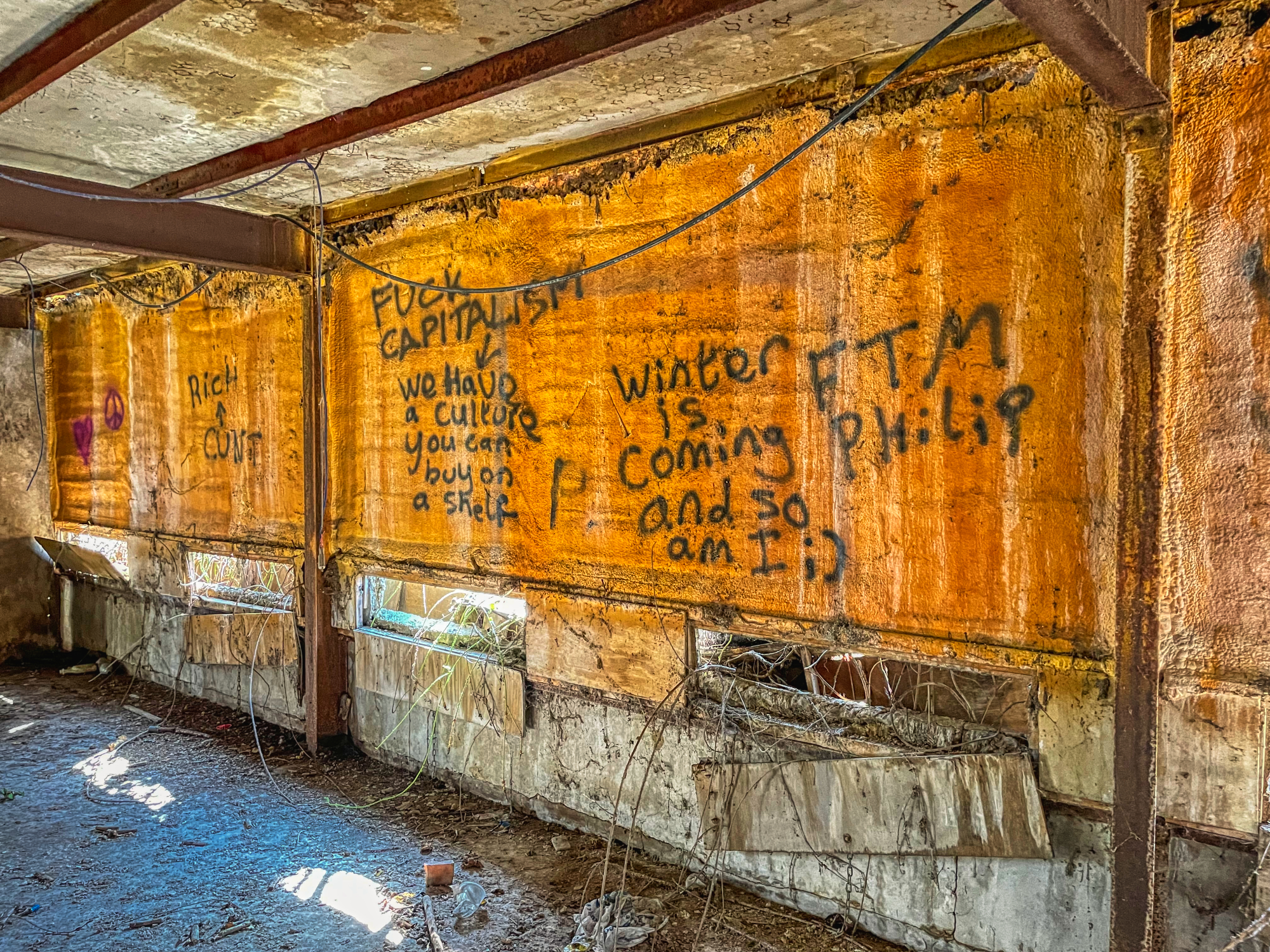 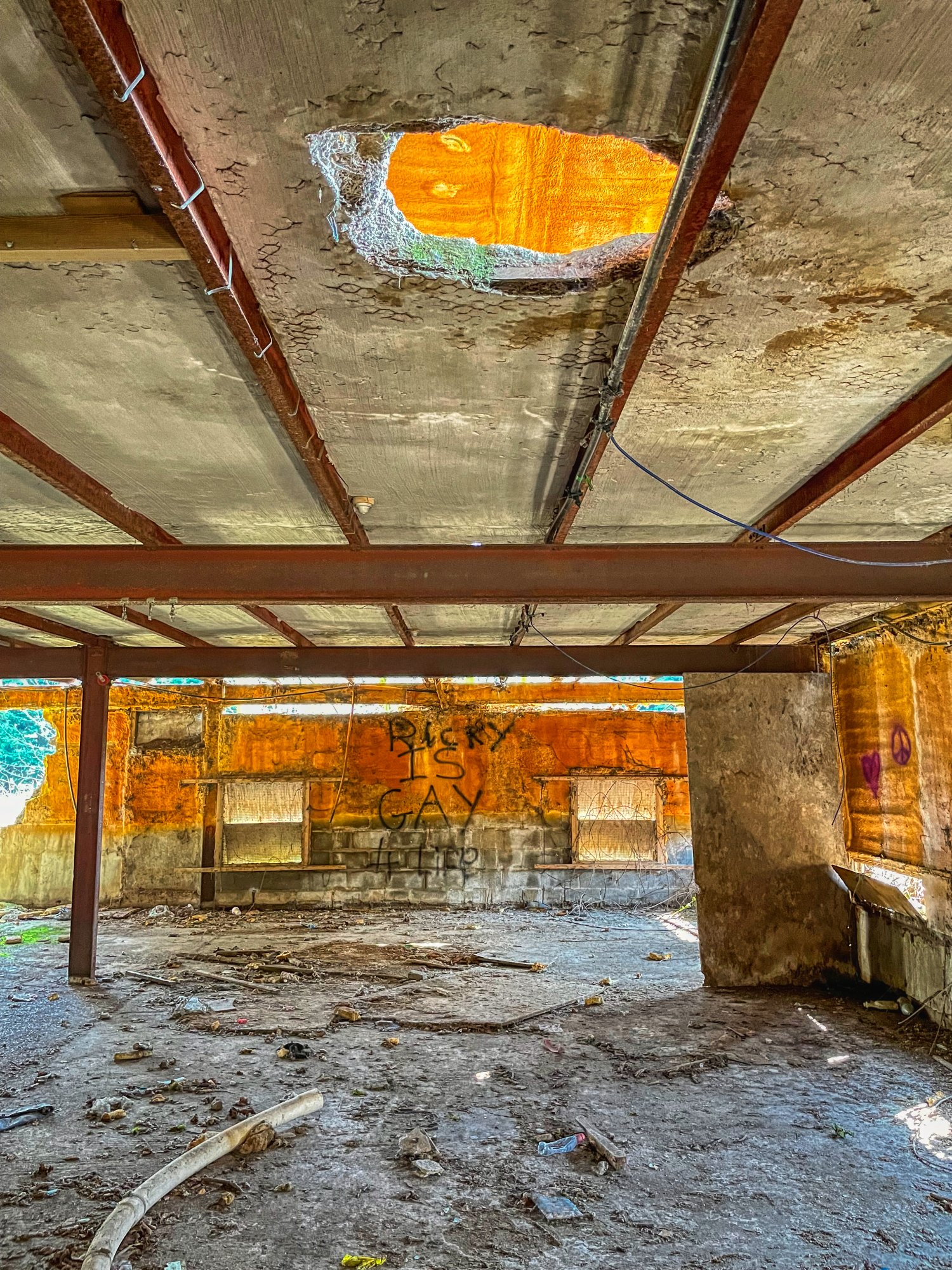 It was all quite unimaginative with writing and no great art. 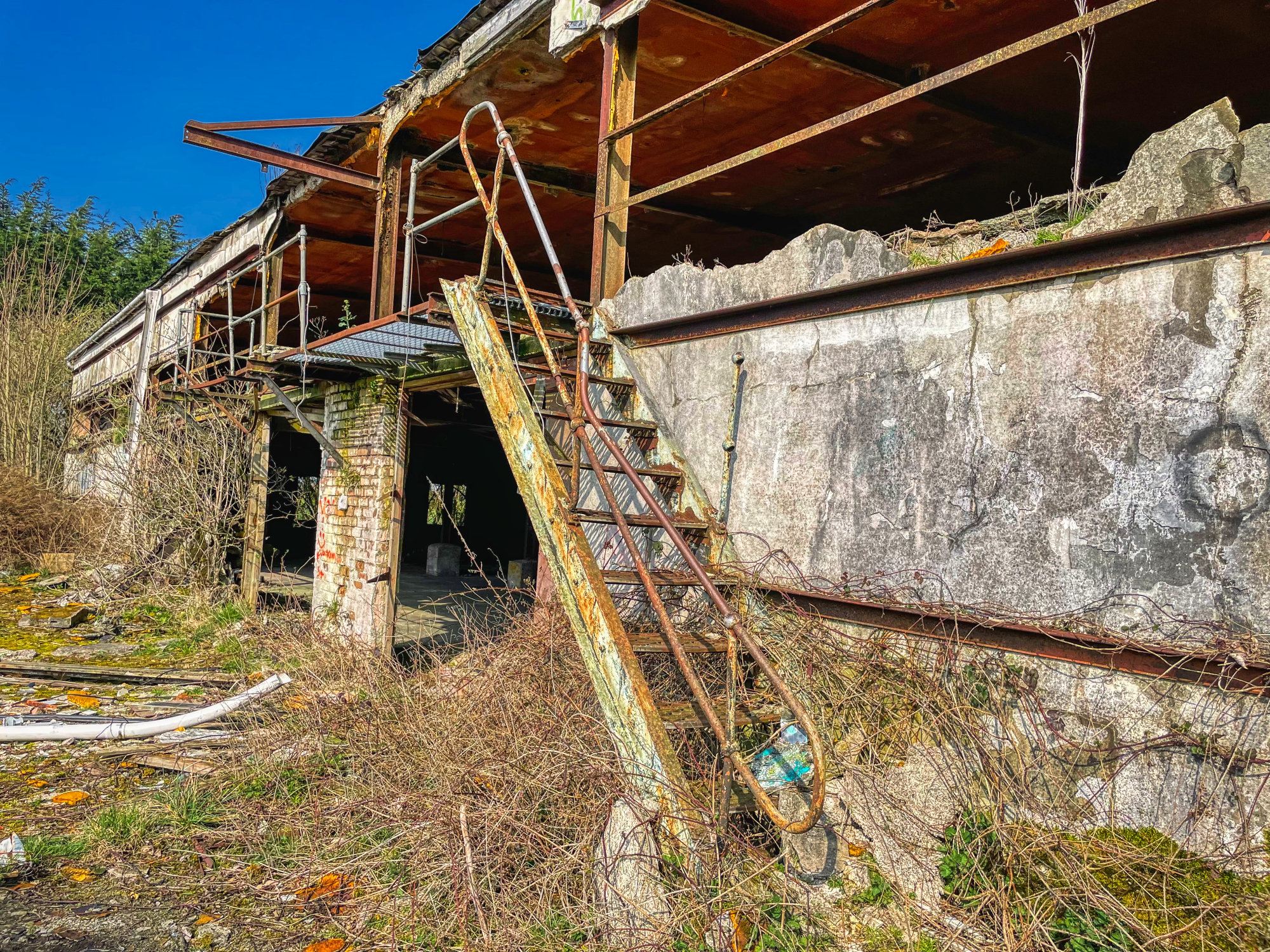 Metal stairways are great. Despite the copious amounts of rust, you can be quite sure that you are not going to break your neck using them. The second storey was much like the ground floor but included holes for the clumsy to fall through. 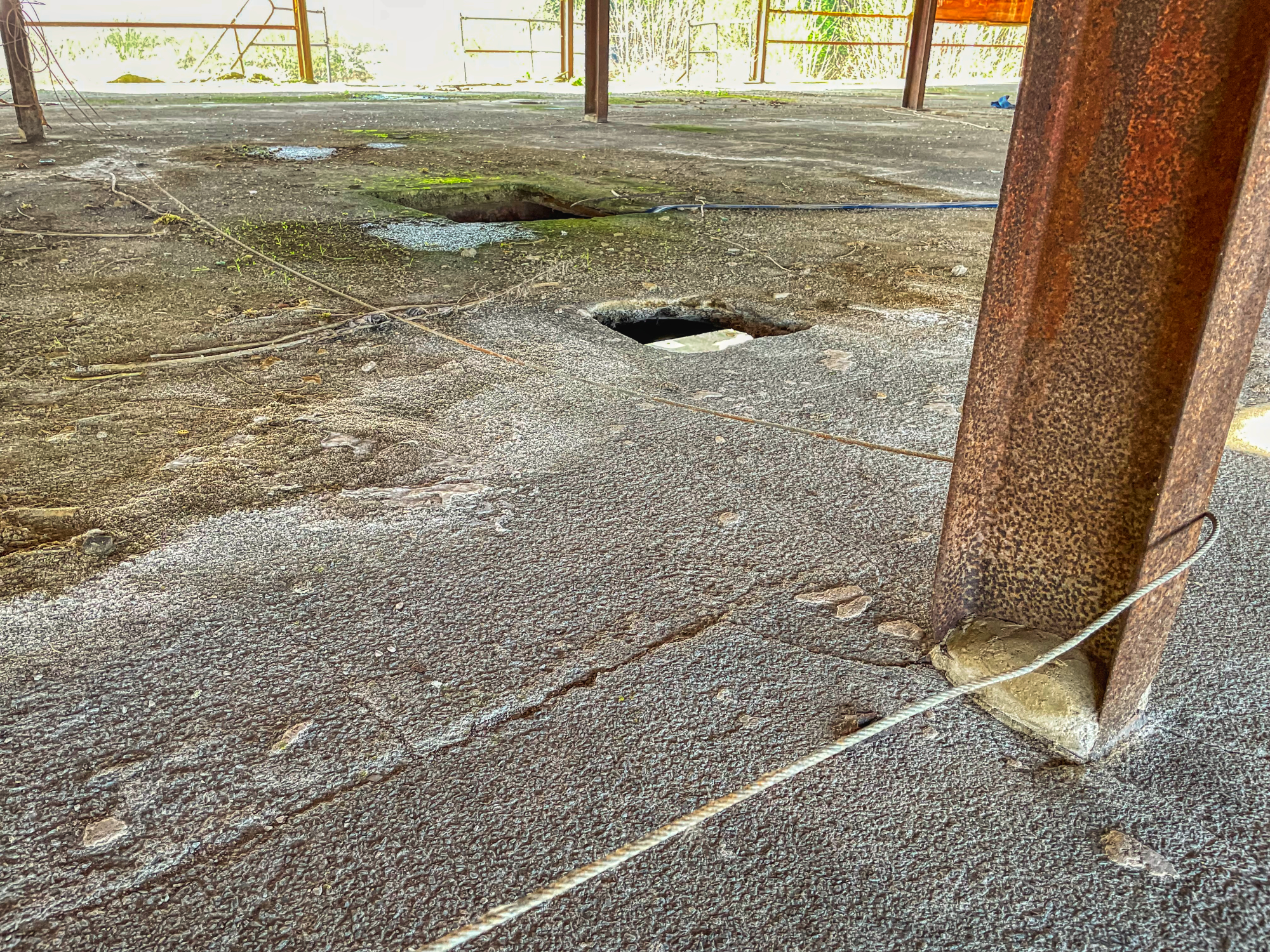 Add a little trip wire and things get more interesting. Parts of the concrete were baying a little in the centre. A little jumping might bring it all down and probably land you in hospital for the trouble. 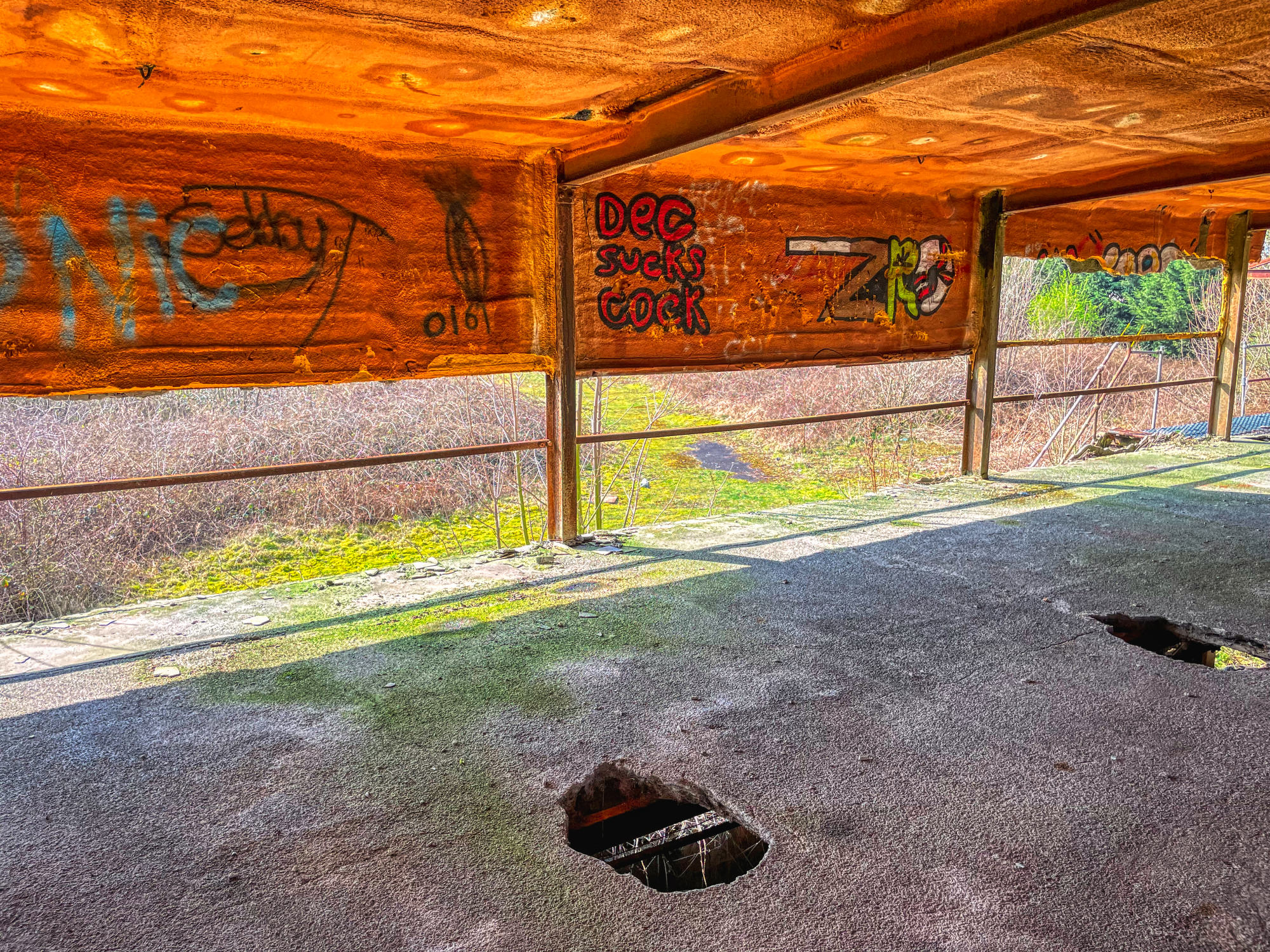 Besides more terrible graffiti it wasn’t much to talk about.

Behind the larger building, it got a little denser even though it was only March. A summer visit would not be a good idea. 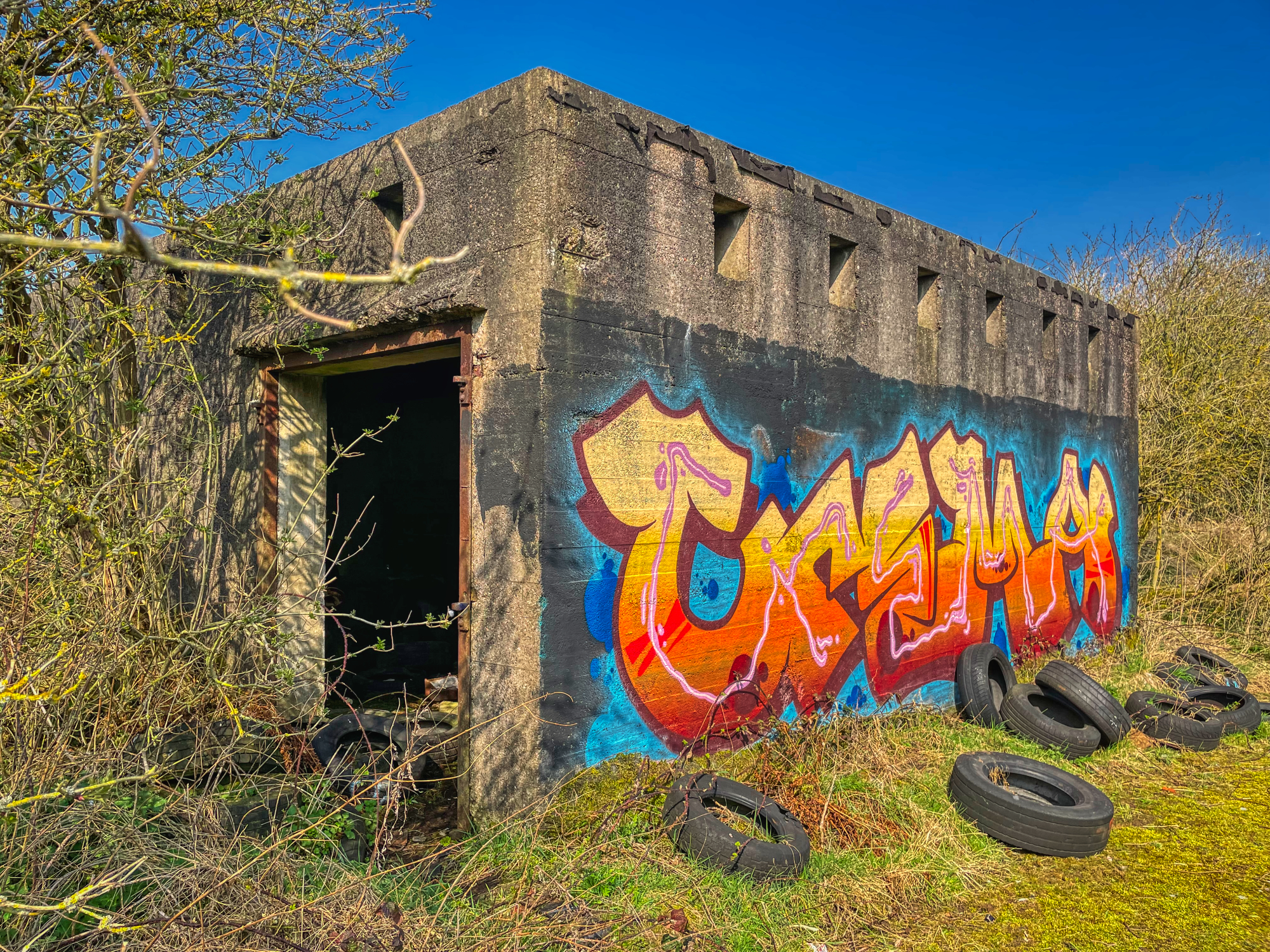 Finding some better graffiti was gratifying, it had been frankly quite shit so far. 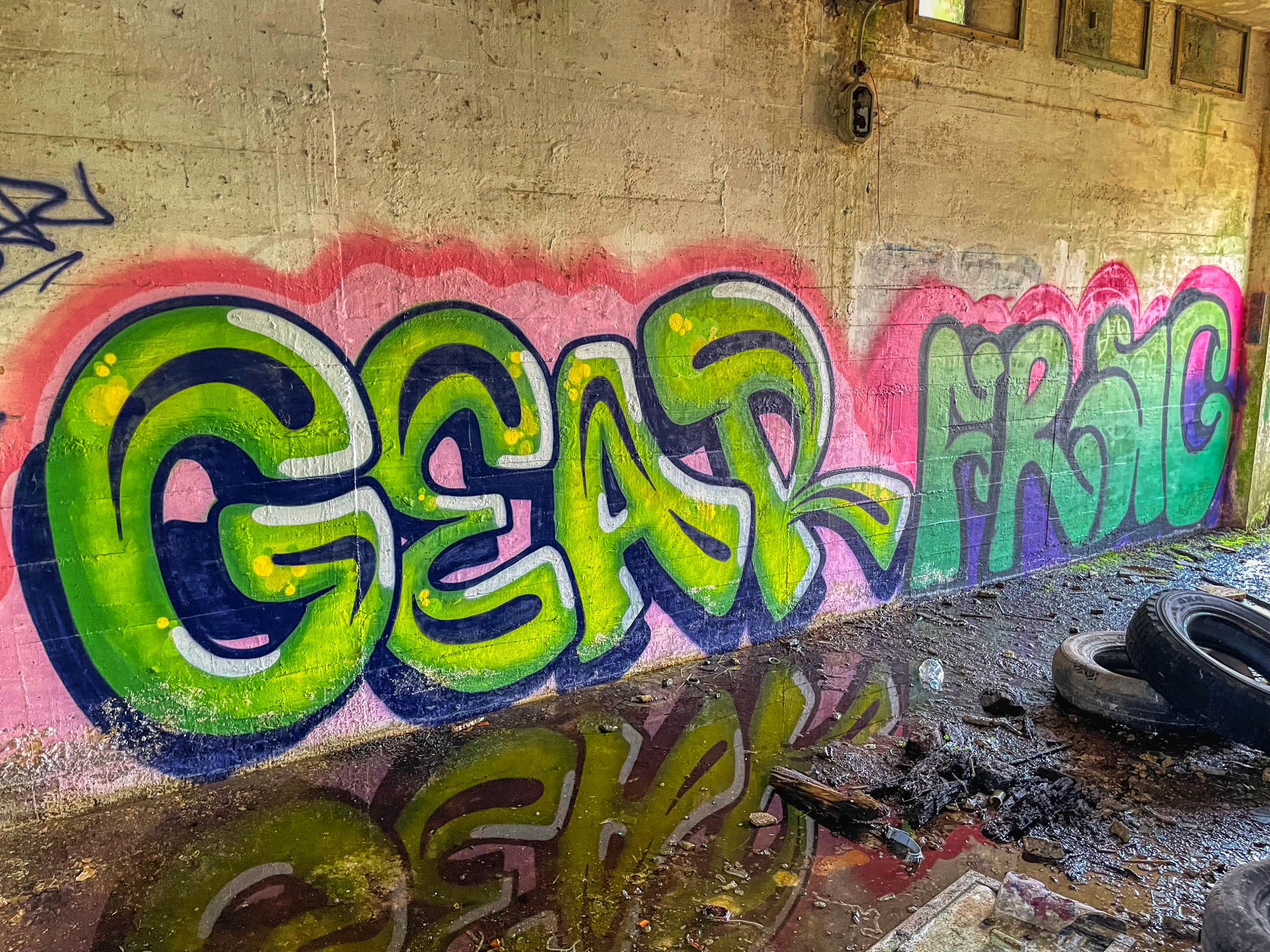 Inside was waterlogged, filled with old tyres, and housed more of the stuff.

…and I thought all the artists came from South Yorkshire… 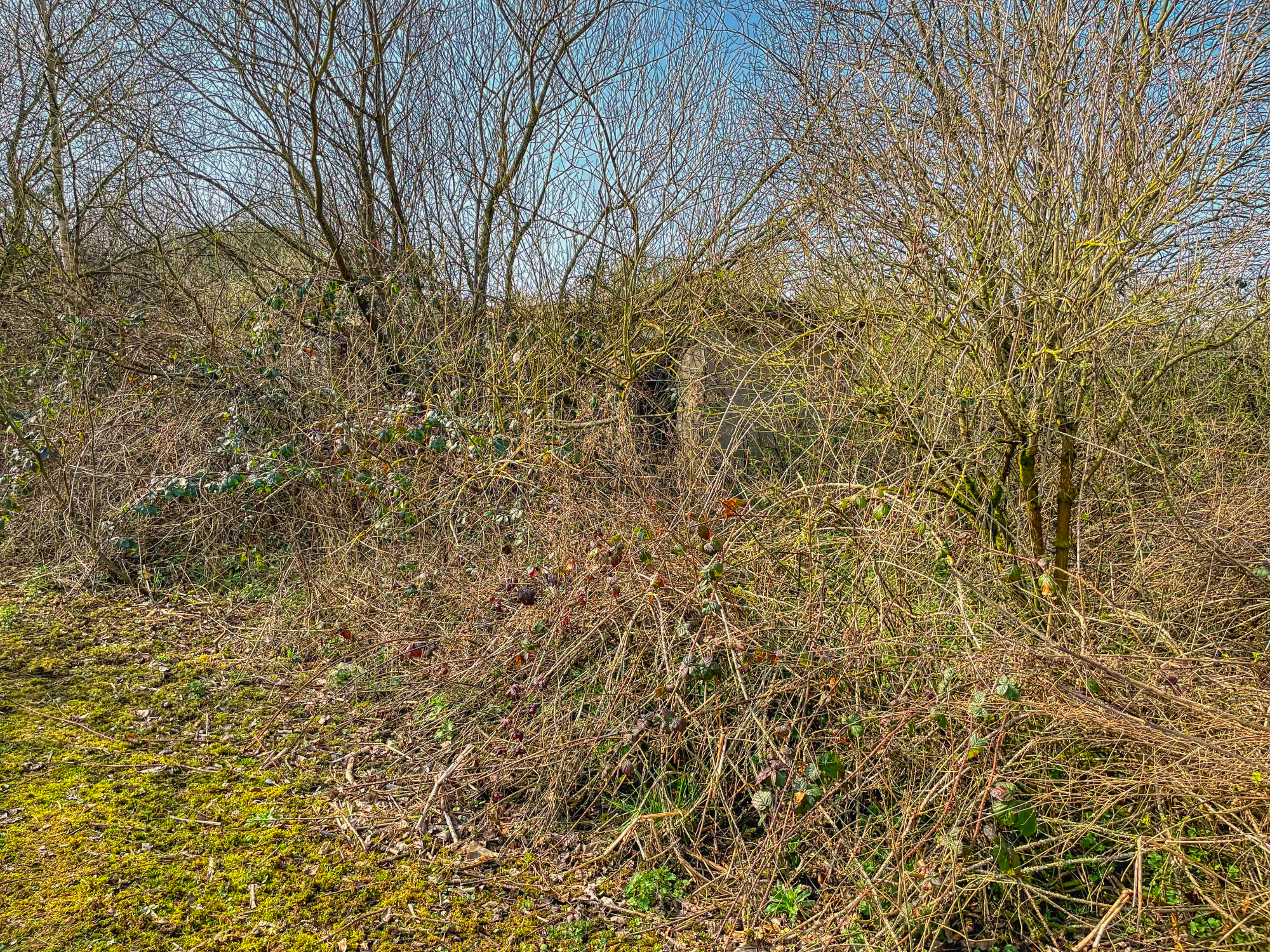 Through this mish-mesh of brambles and crap, we could see yet another building. Getting to it was a pain in the arse and anti-climactic.

...one small building full of old crap; this is why we do Urban Exploring sigh'...

‘Auschwitz' is a little more impressive in its own way and the writer can't even spell; fucking idiot. 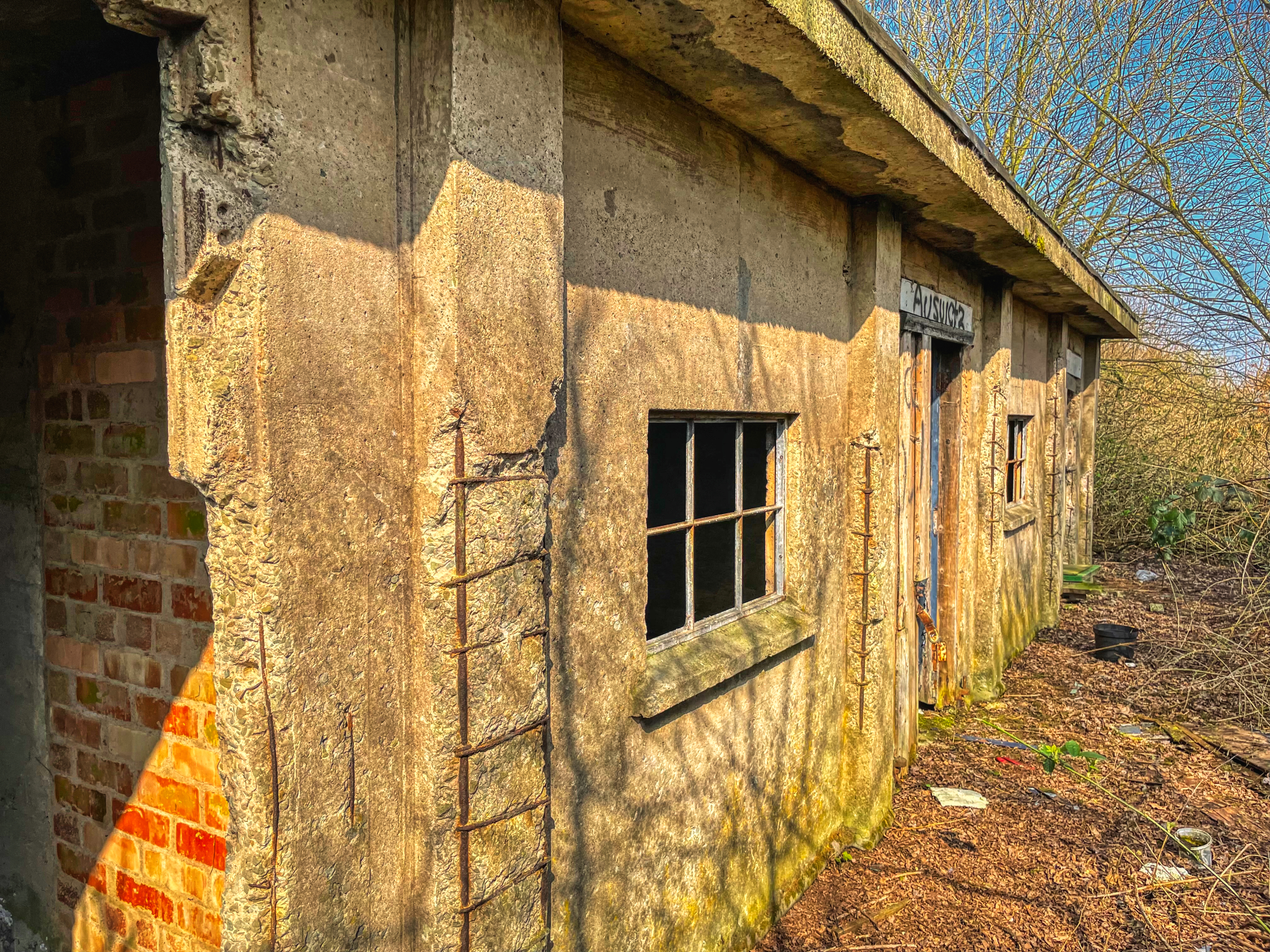 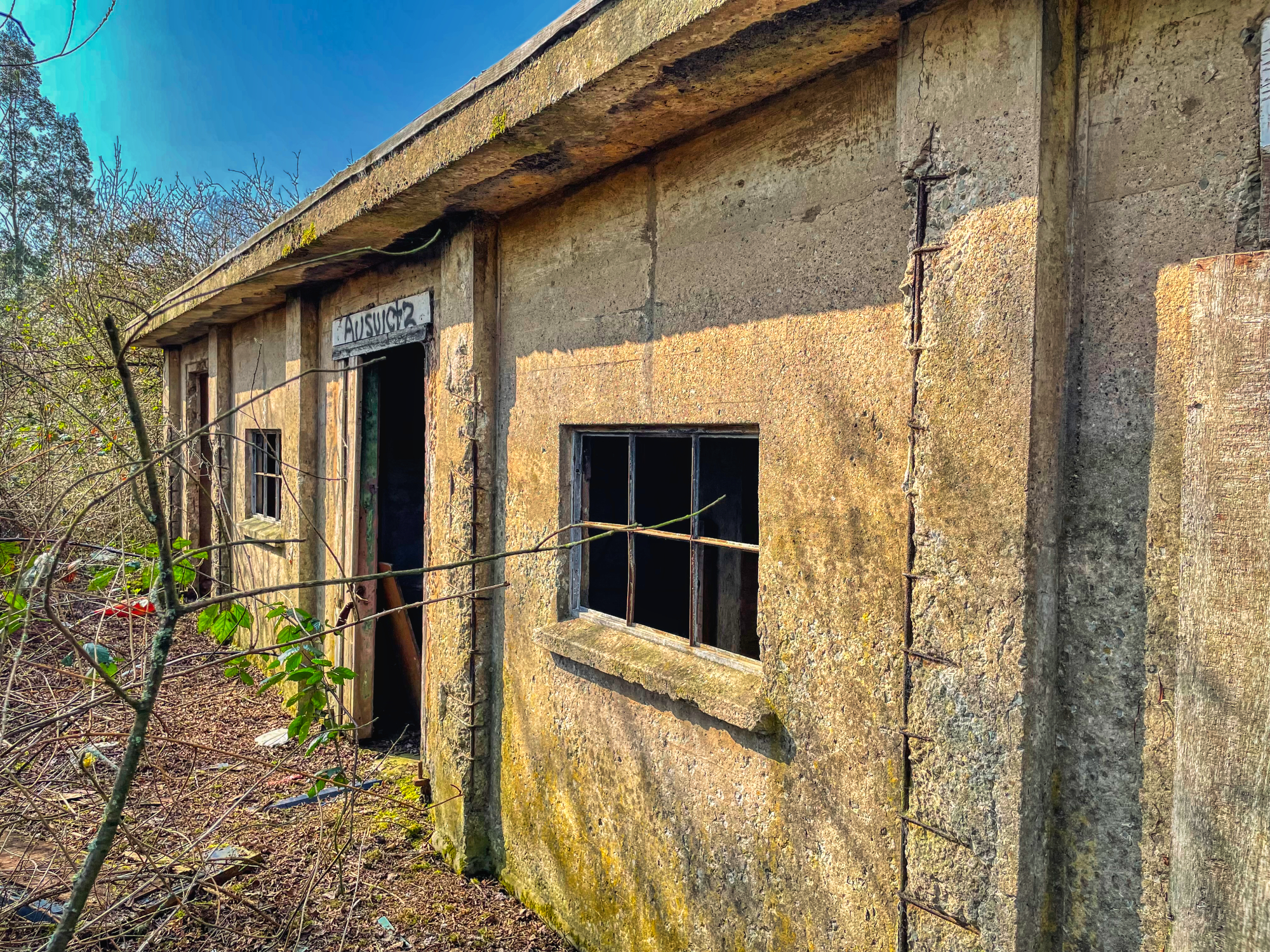 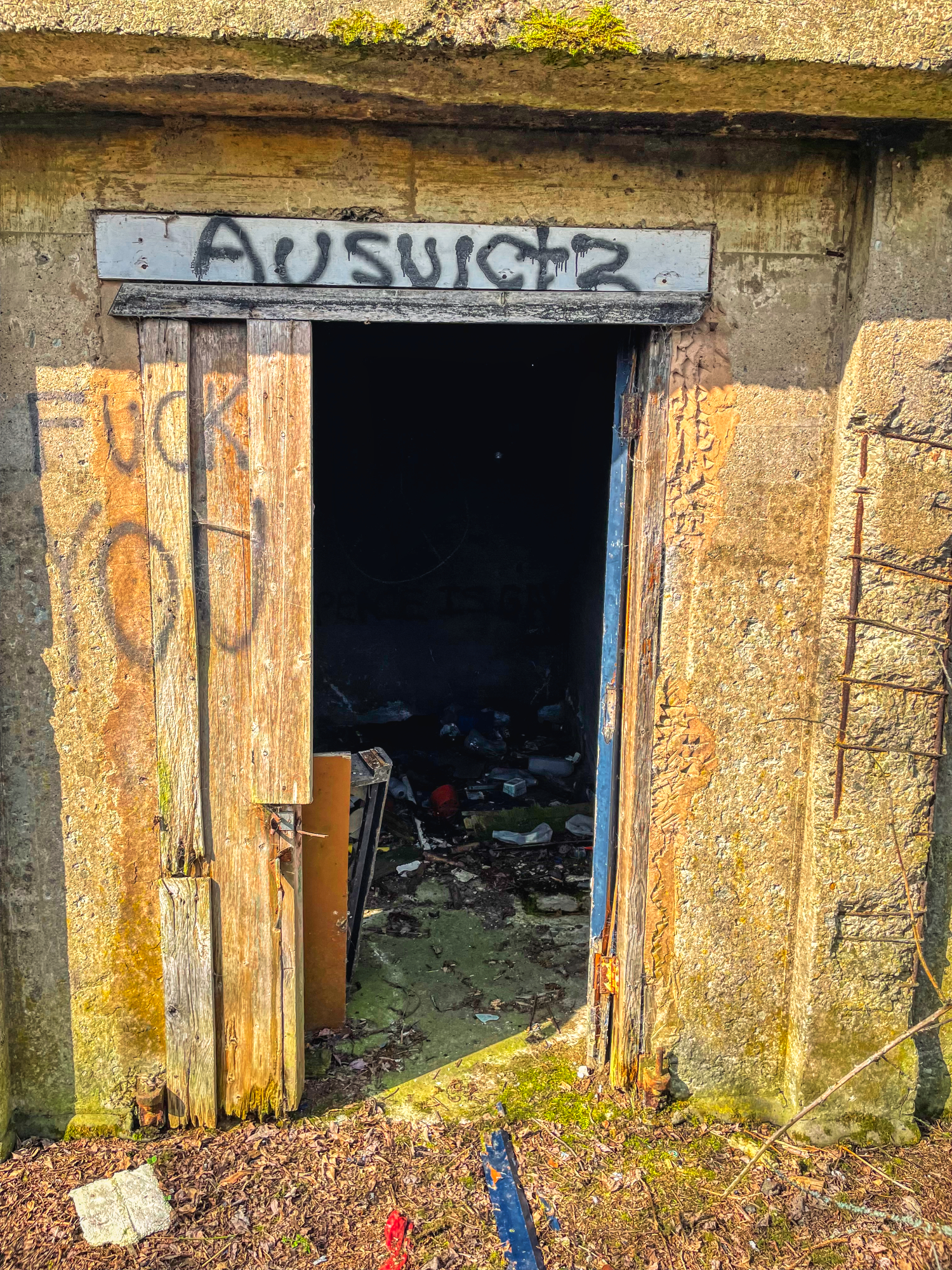 There were a few other buildings dotted around but we had seen enough, ‘Auschwitz' my arse! 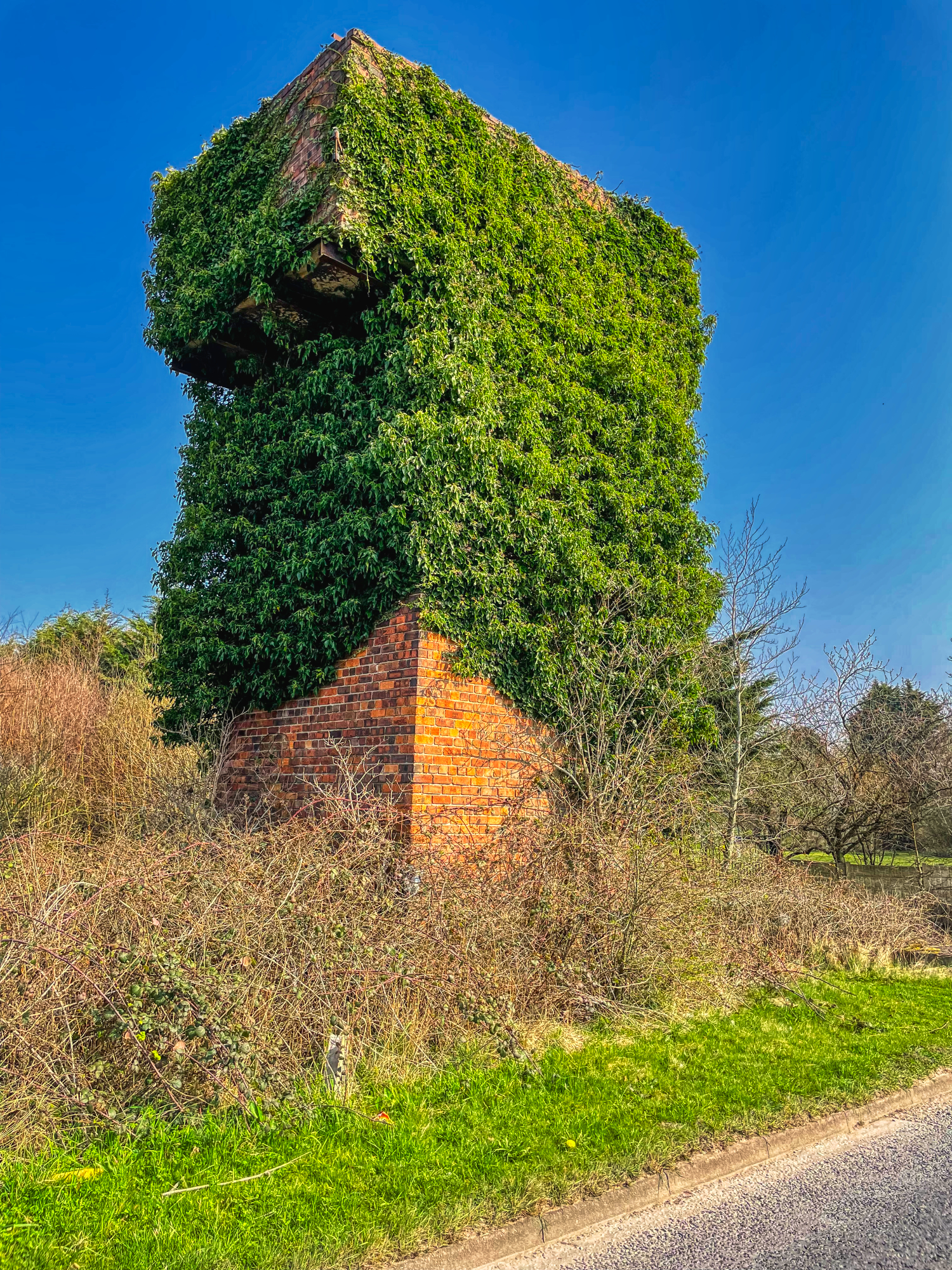 On the roadside around 100 yards away we spotted an ivy-covered tower. It was worth a look even though a domestic property was close by. 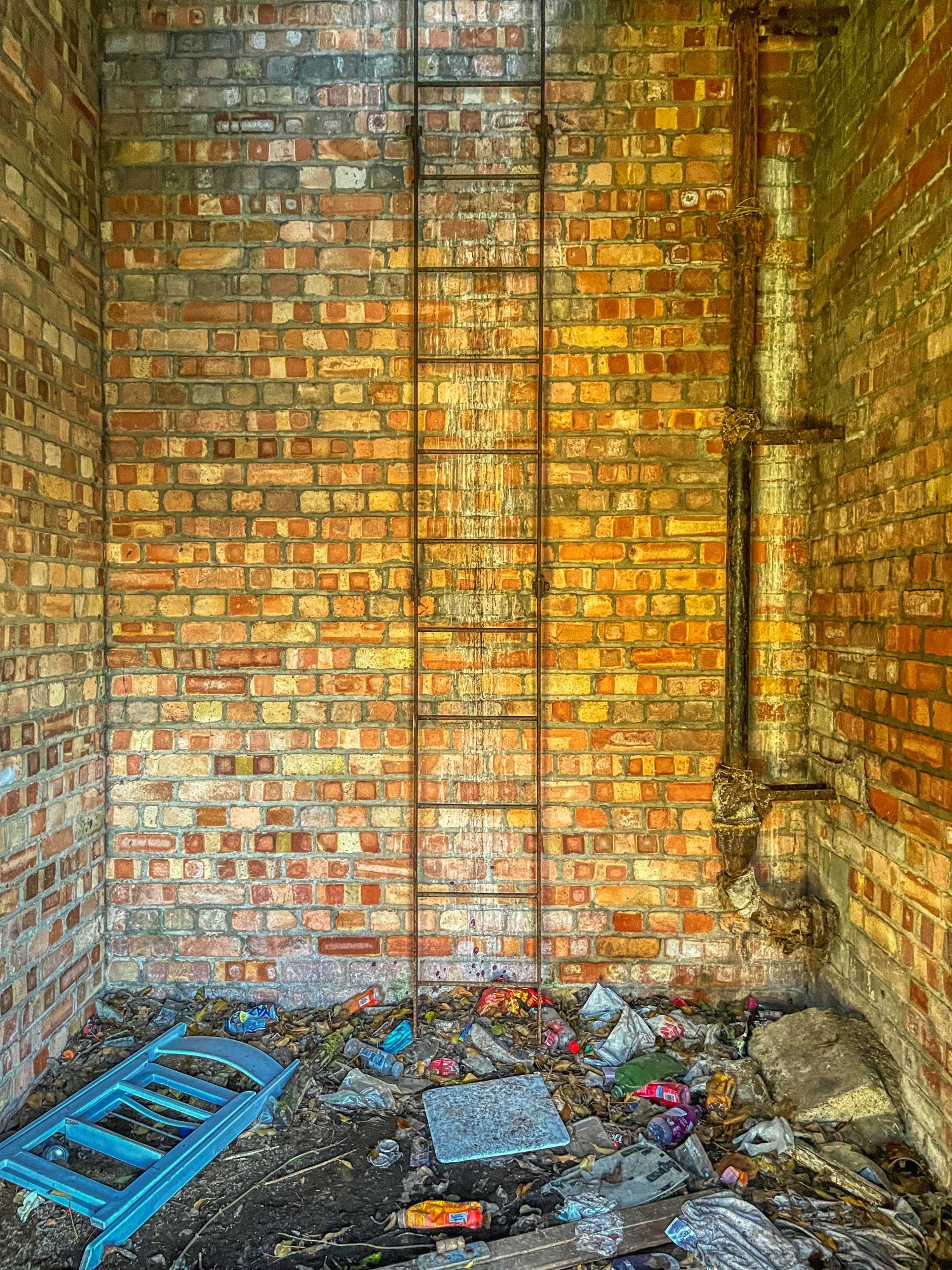 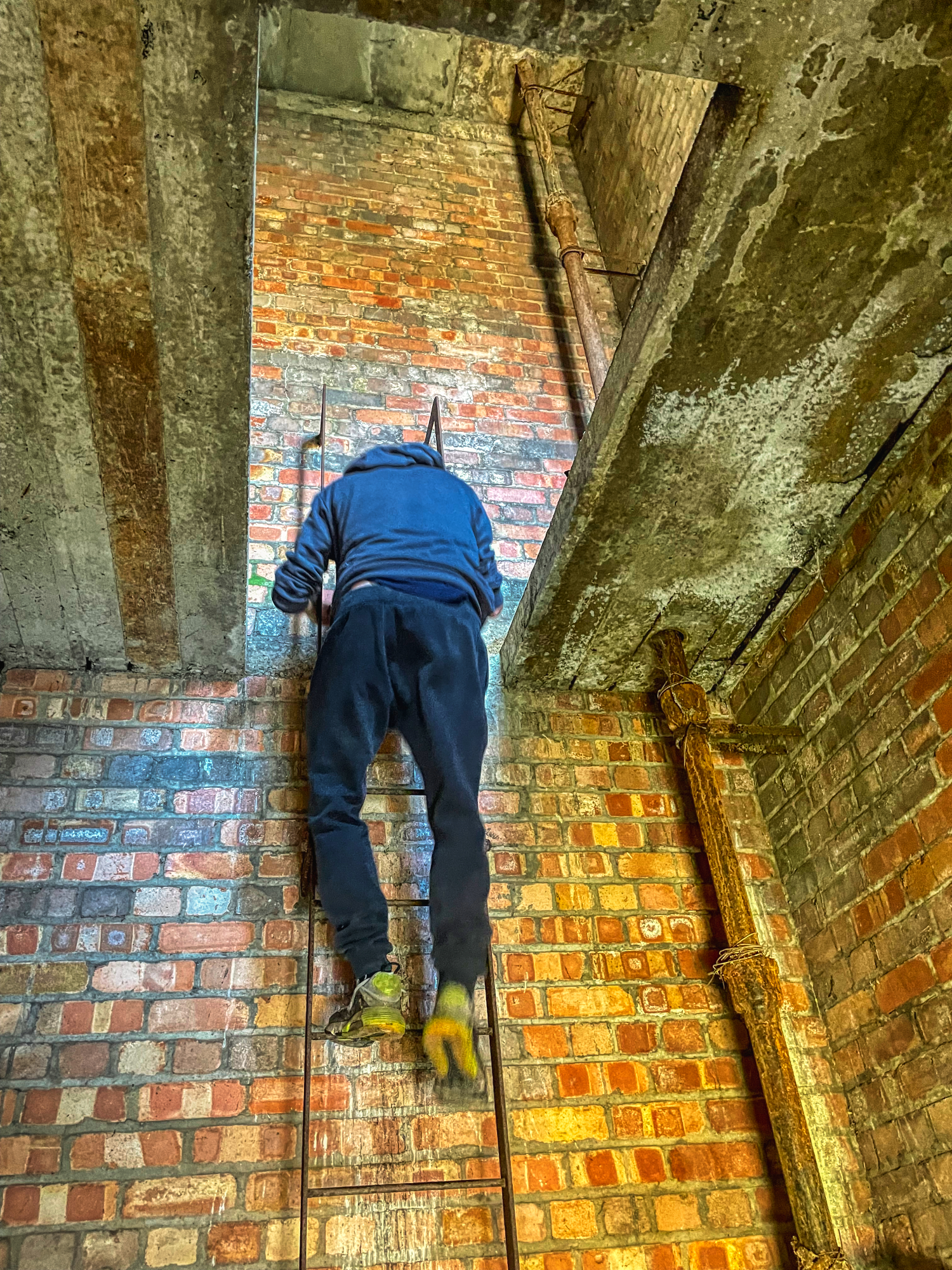 ...'@anidiotexplores has trouble keeping his trousers up while descending from the old gun tower'...

You could go inside and even climb up. Once again the metal ladder appeared sturdy. Both of us ascended to the middle floor but stopped at that. 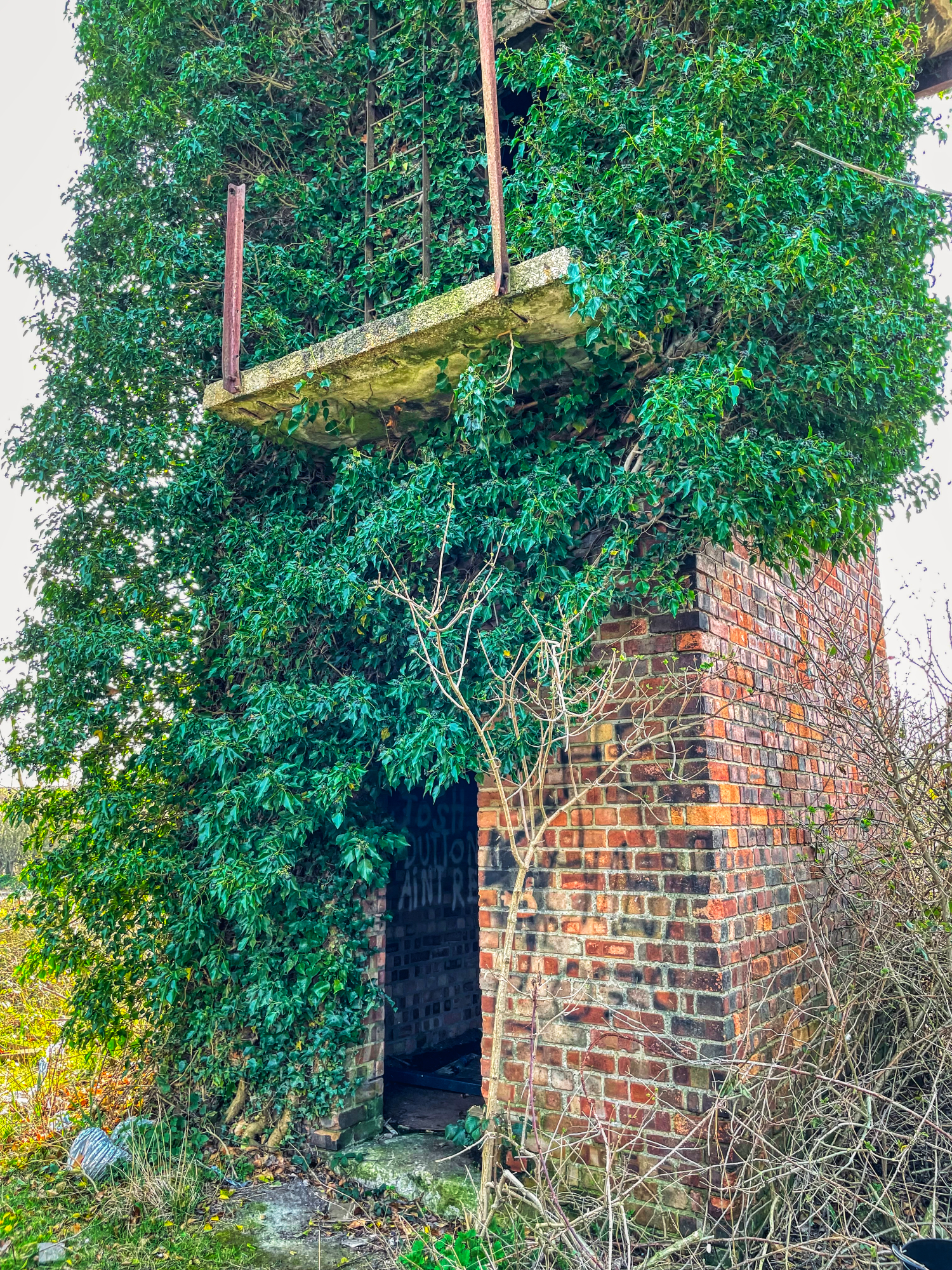 While it might be a nice view up there that metal ladder is quite external, covered in ivy, and might well come away from the wall if used.

We are daring, but there are limits.

‘Penketh Heavy Anti Aircraft Gun Battery Station’ is strictly a 3/10 explore and should only be visited if you are extremely bored or desperate. 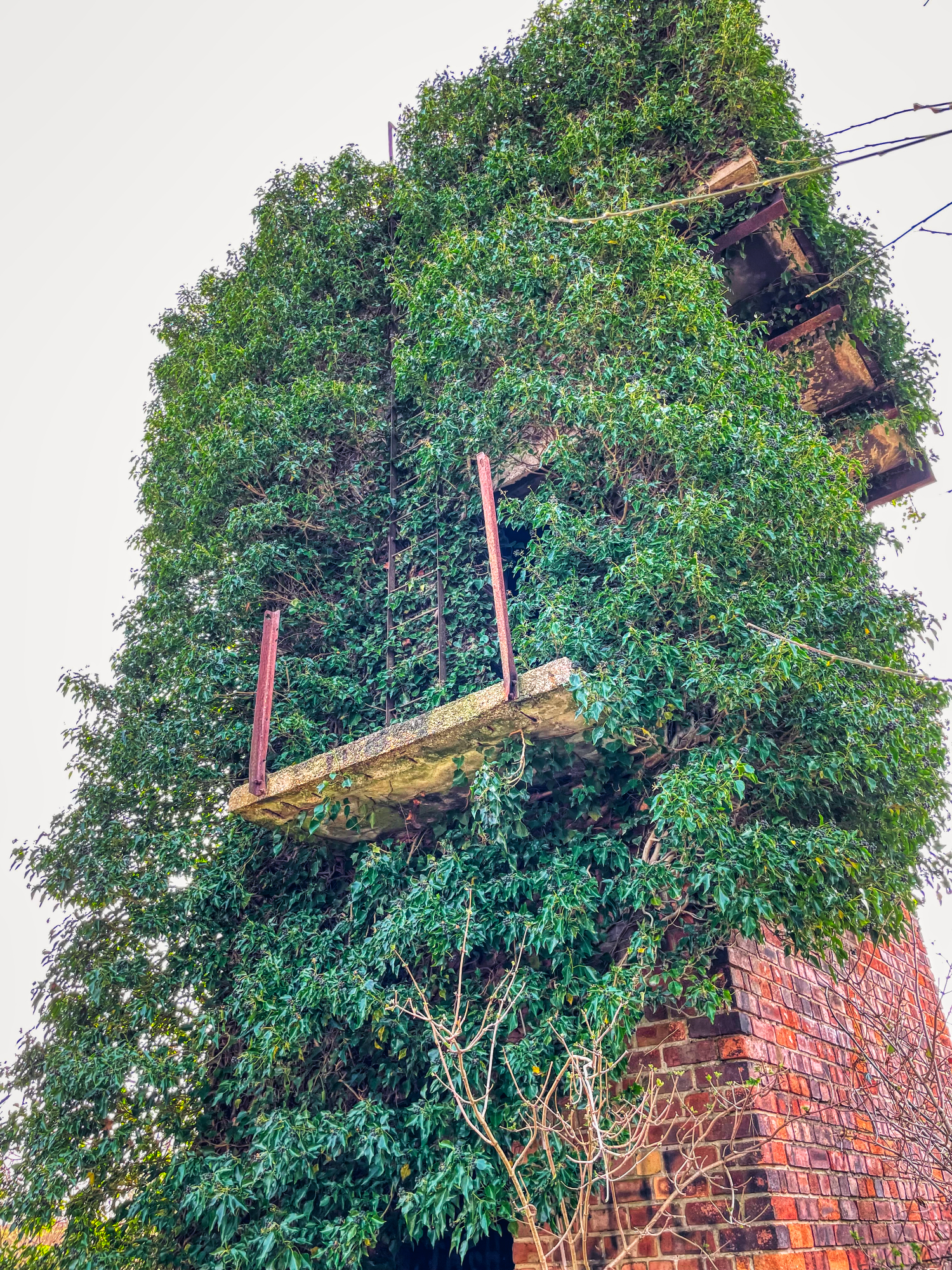 We left and made our way to Daresbury Hall. Surely it couldn’t be this bad?

The wire looks like a trap to make someone fall down :)

Yeah, some people have nothing better to do!

I feel like you did one like this in the past. Like an old military base or something. You could pretty much tell from the far away pictures that it was going to be a bust. No walls seems to be a big give away from what I have seen of your other posts!

I recall that other one, it was in Wales and about as interesting as this. This day was a real bust, in fact the start of 2022 was terrible but got much better as we entered May and beyond.

I was sleepwalking in there, only Auschwitz woke me up. What was inside?, unspeakable... old tyres, grotty water, slime and shit..., lovely!

You got a few atmospheric shots out of it even if it wasn't exciting for you.

I noticed a fair bit of graffiti in the Amsterdam metro tunnels. Okay, so people are daring to do that, but people won't get a proper look at it. Maybe it's just about impressing other 'artists'.

Maybe it's just about impressing other 'artists'.

Much of the work I see will only be seen by other artists and the likes of me. It's very wasteful.

Reading this was like as if am watching an horror movie, nice one mam

I wonder what is the fun of doing graffiti in such kinds of ruinations!!! The ground floor structure of the 1st building amazed me...

I wonder what is the fun of doing graffiti in such kinds of ruinations!!!

The scrawling is the work of idiots generally, the art is the different thing. Some of it is really good but rarely seen as it's not exactly on pubic display.

Completely agree, in Kharkiv, I also saw some good murals and graffitties but those artists and their art pieces never got exposure... Sad...

Not much left there - but still has history, even if not well known !

Army bases are generally dull. We did one a few weeks ago that was so covered in brambles I was glad to depart.

Following your account is like going through a portal and looking at places I only thought existed in apocalyptic movies or in some similarly themed video games.... Thank you so much for that!

Living a video game isn't so bad, so long as computer-generated monsters are not part of it!

Only you can take pictures of run-down buildings with nothing in them and it still is interesting.

Twisting a story around these is something I learned to do some time ago! I try and get some history if possible. There was not much about this one.

Even if there was not much there, you srill make a story.

Cool stuff. I see that the graffiti authors would need some lingual and art class.

They are amusing at time, the art is occasionally outstanding.

For a moment I thought it was a poem to be honest you are a good writer but i came to understand you were talking about an abandoned house which I can sense regrets too in your words like you felt you should have done more, I would have felt same way too I love to get closer to things and also finish up by not leaving it unfinished.

This place looks so ancient. But so nice to see.

winter is coming and so am I
class lol

LOL, I am filling your heads with important history!

@rocinanteprimo, sorry! You need more $LUV to use this command.