Tales of the Urban Explorer: The Remains of Albion Mill

I had driven past it many times and even tried to get inside during 2020 with @dizzydiscovery. Sometimes even shit-holes are fenced up well, but not anymore.

I was solo on this occasion as @bingbabe was not in the least interested in planting her delicate tootsies in such a filth-ridden hole. 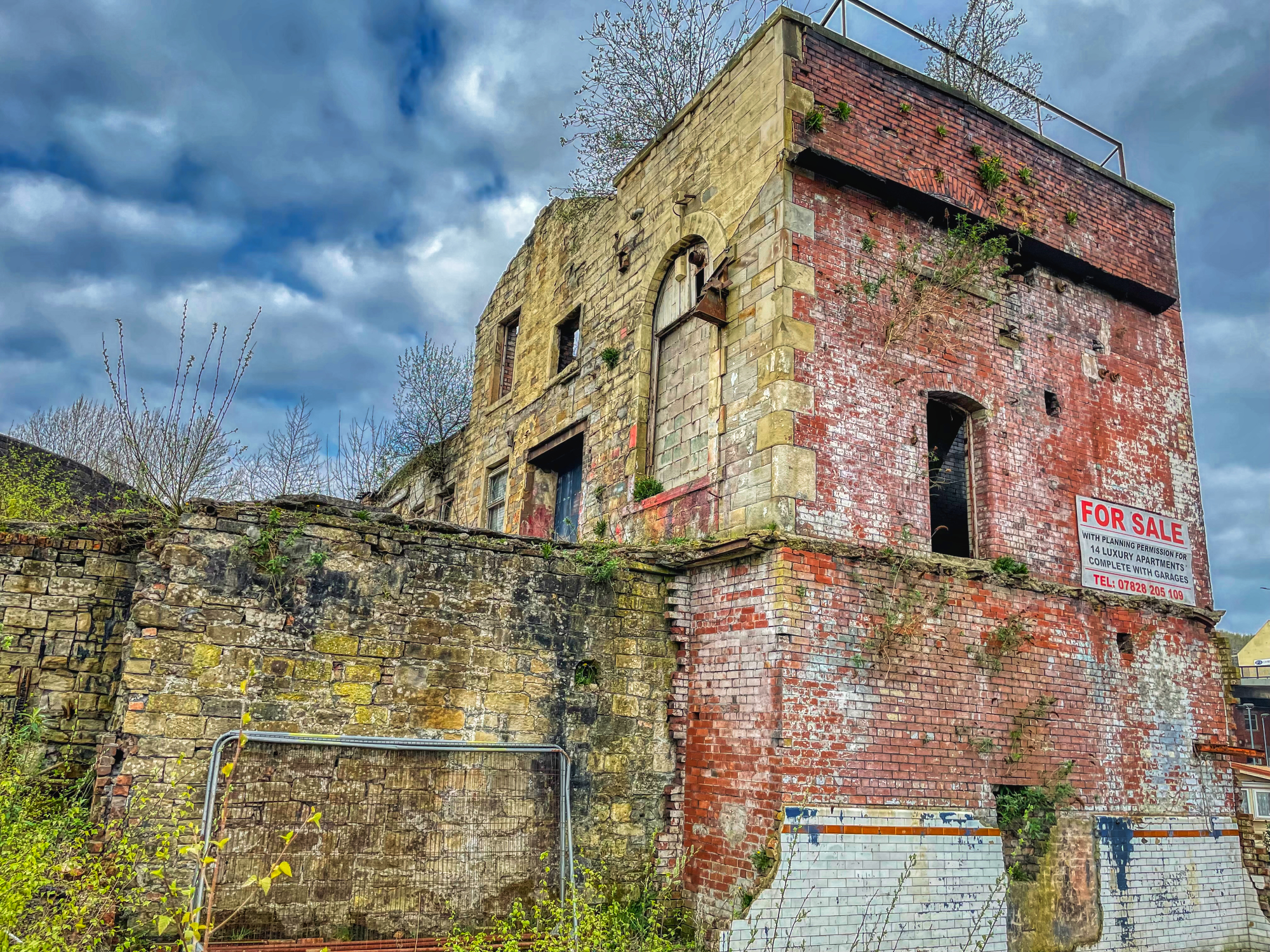 For me it was intriguing; what was it, what had it been? I started digging and found something via an old map which led to more information.

Albion Mill was a steam-powered cotton-weaving mill built between 1887 and 1893. It comprises a multi-storey office, warehouse, and yarn preparation block, a single-storey weaving shed, and an engine house.

The buildings are of coursed and random stone rubble and were in good condition, and in use as a warehouse in 1998.
Source

A warehouse in 1998, was this the same place? The map indicated so. This old image from 1905 is unrecognisable from what I was seeing. The sliding door surely can't be the same one that is now literally dropping off its hinges? 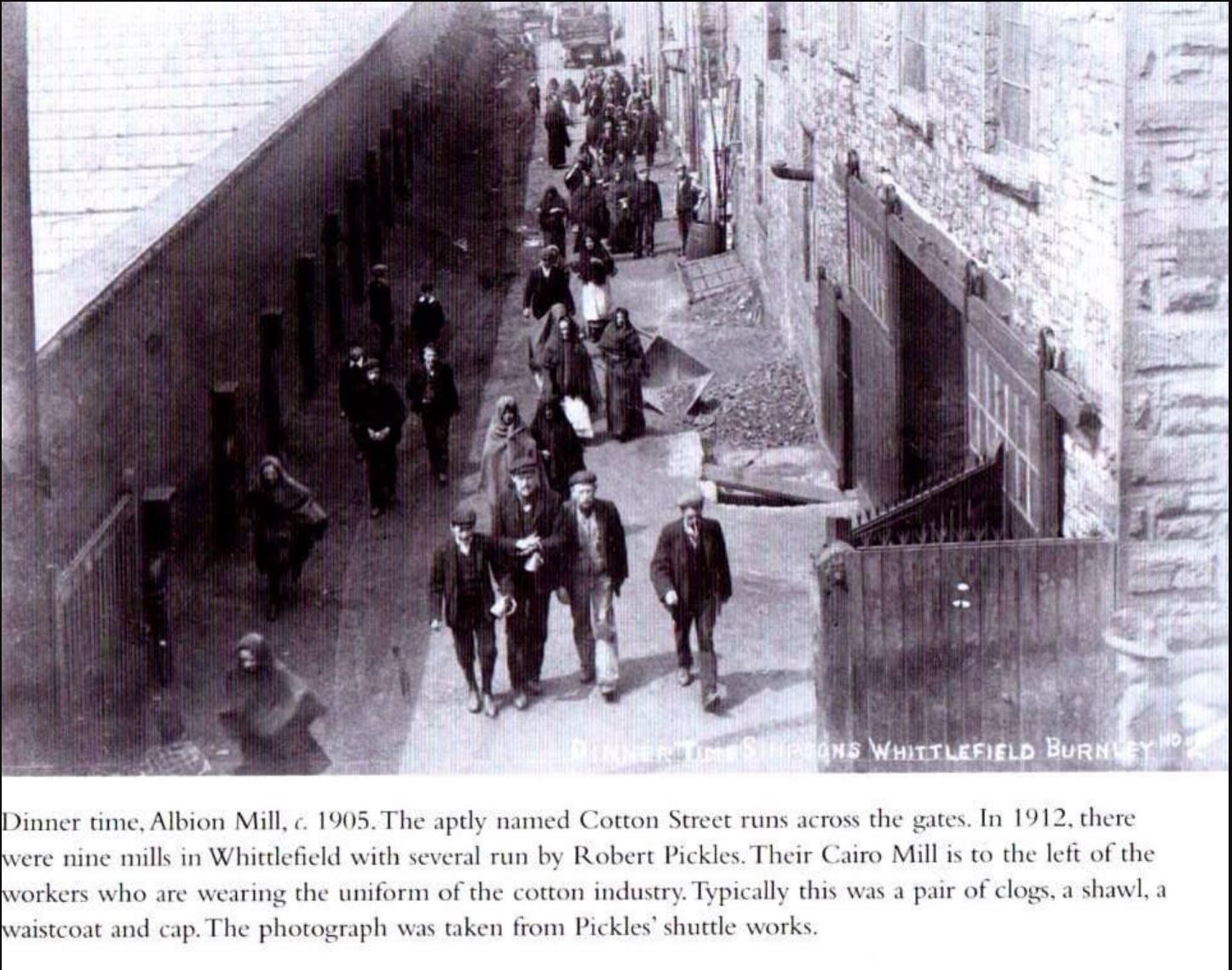 Sliding between the anti-climbing fencing I made my way up the slight incline taking in the mess before my eyes. 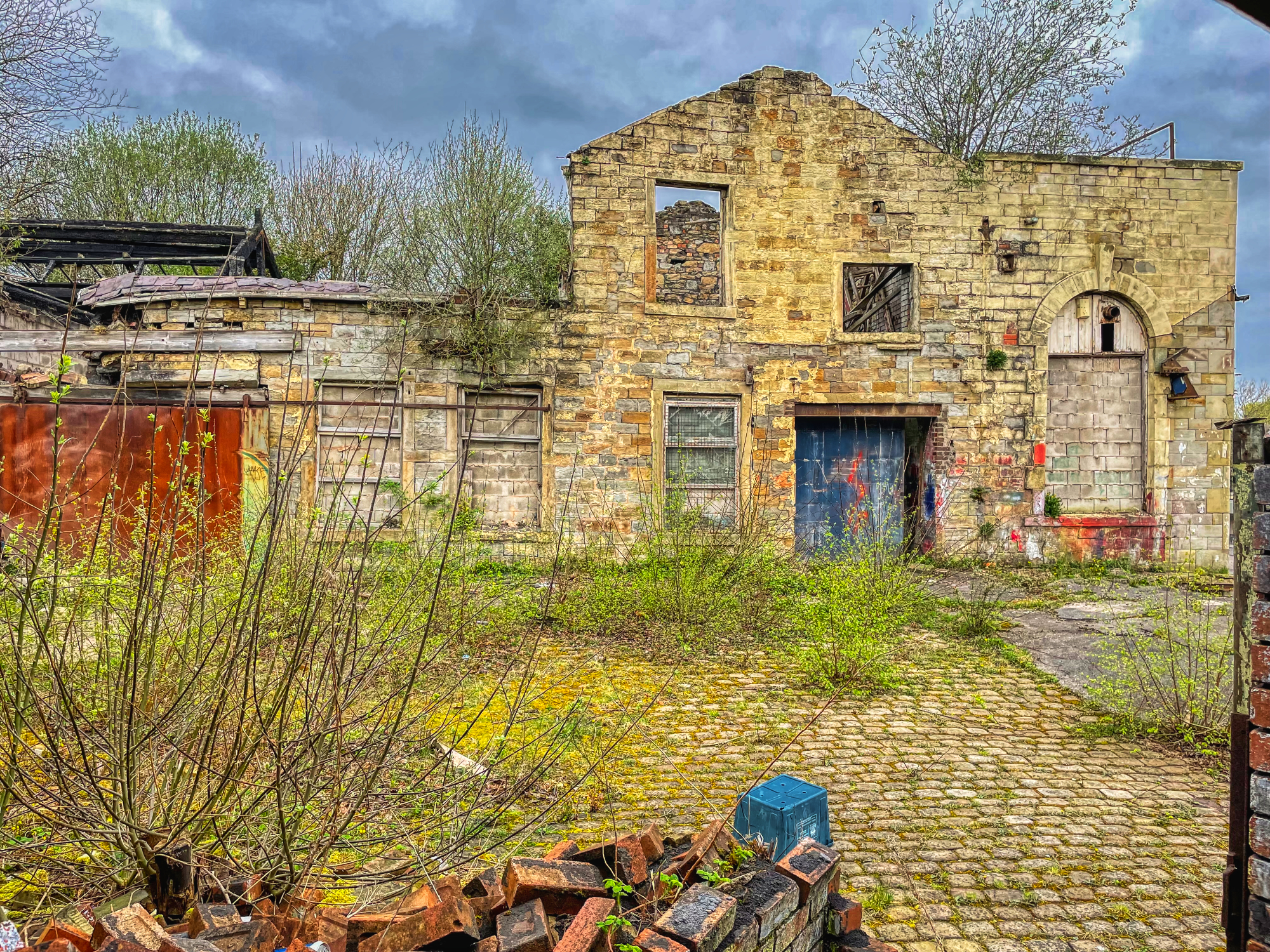 Someone had attempted to concrete at least part of the building up. It was either the blue sliding door to the right or the rusty rotting door to the left.

…'it was one of those crossroads in life, you make your decision and then have to live with the consequences'…

Striding purposely toward the rusty rotting door, I yanked it open to no avail. Rusty doors don't like being moved, not one bit. 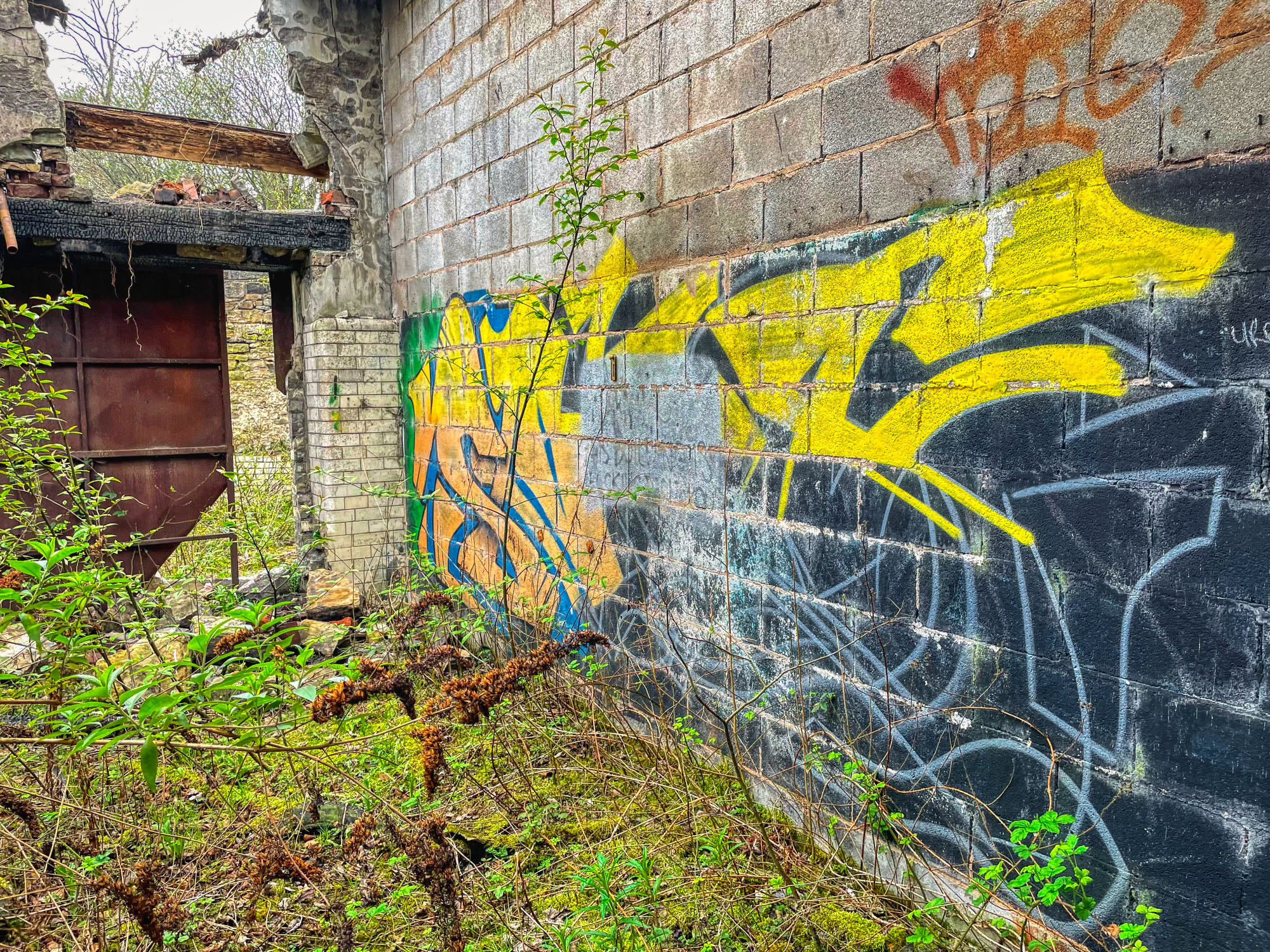 It was ajar just enough for me to sneak through. 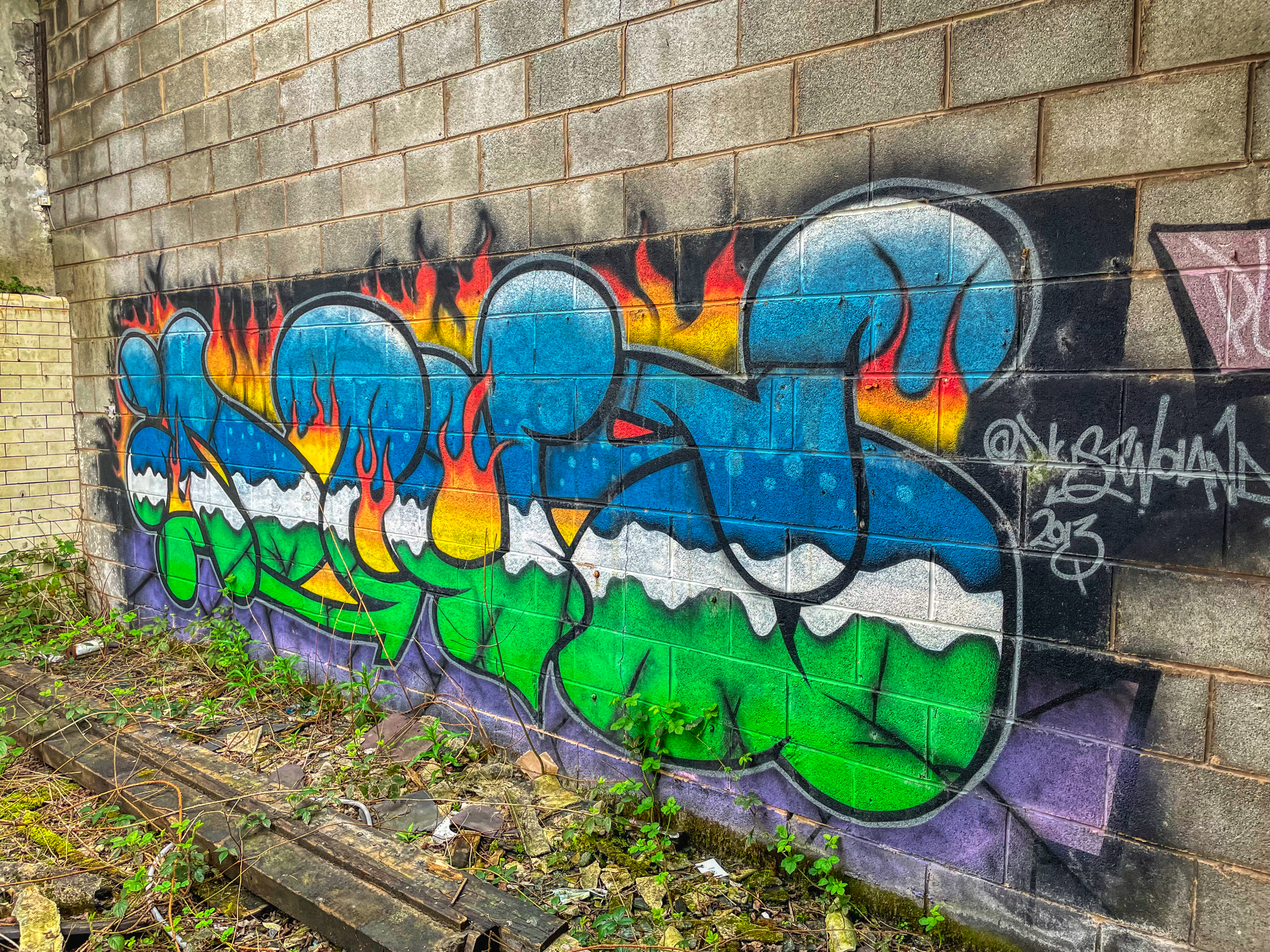 I looked upon some admittedly decent graffiti. If it's been there since 2013 as the signature implies then it's well preserved. What a shame nobody can see it, that’s nothing new. 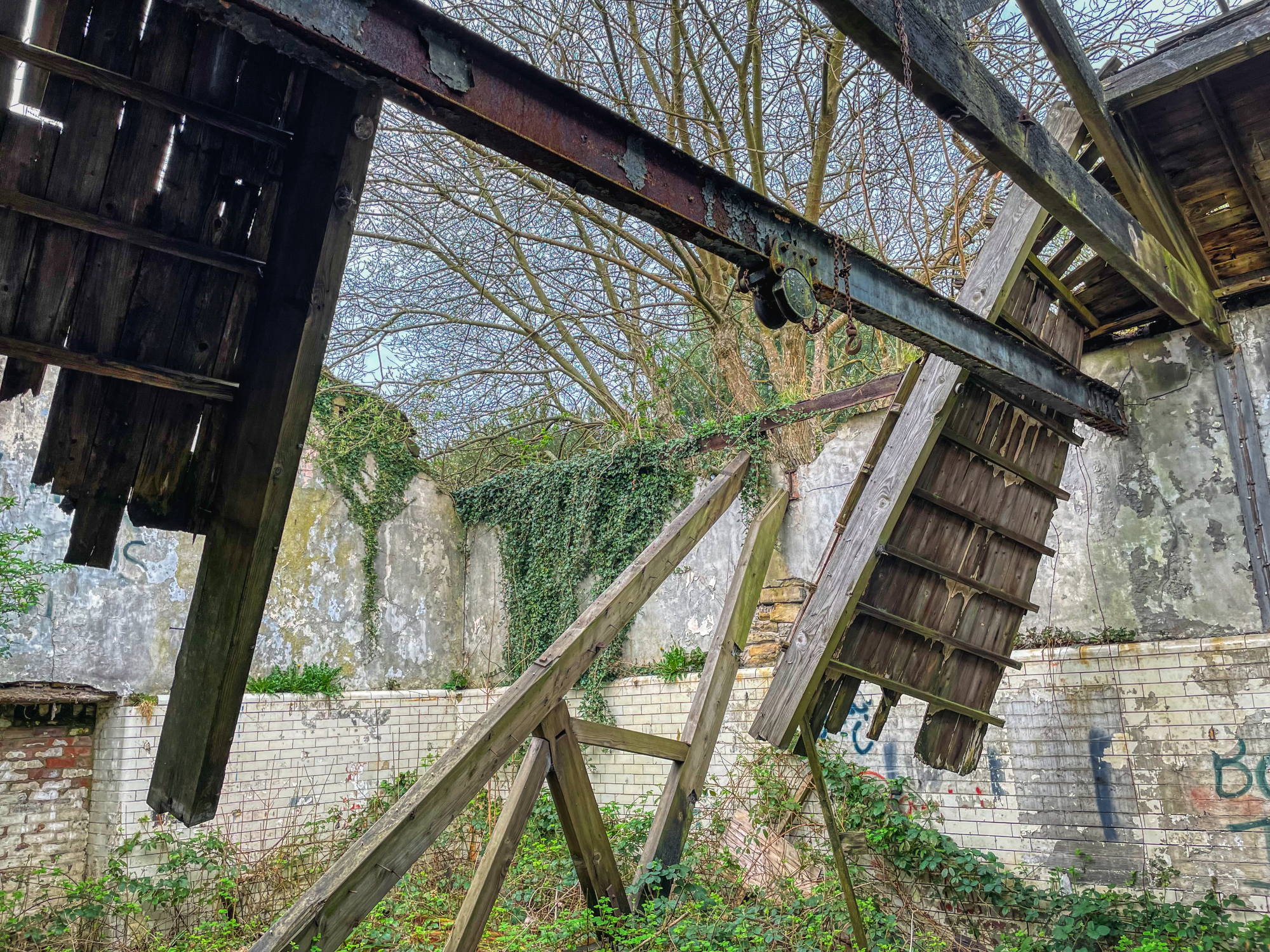 From the outside, I could see the roof was coming down but noticed a pulley system attached to part of it. 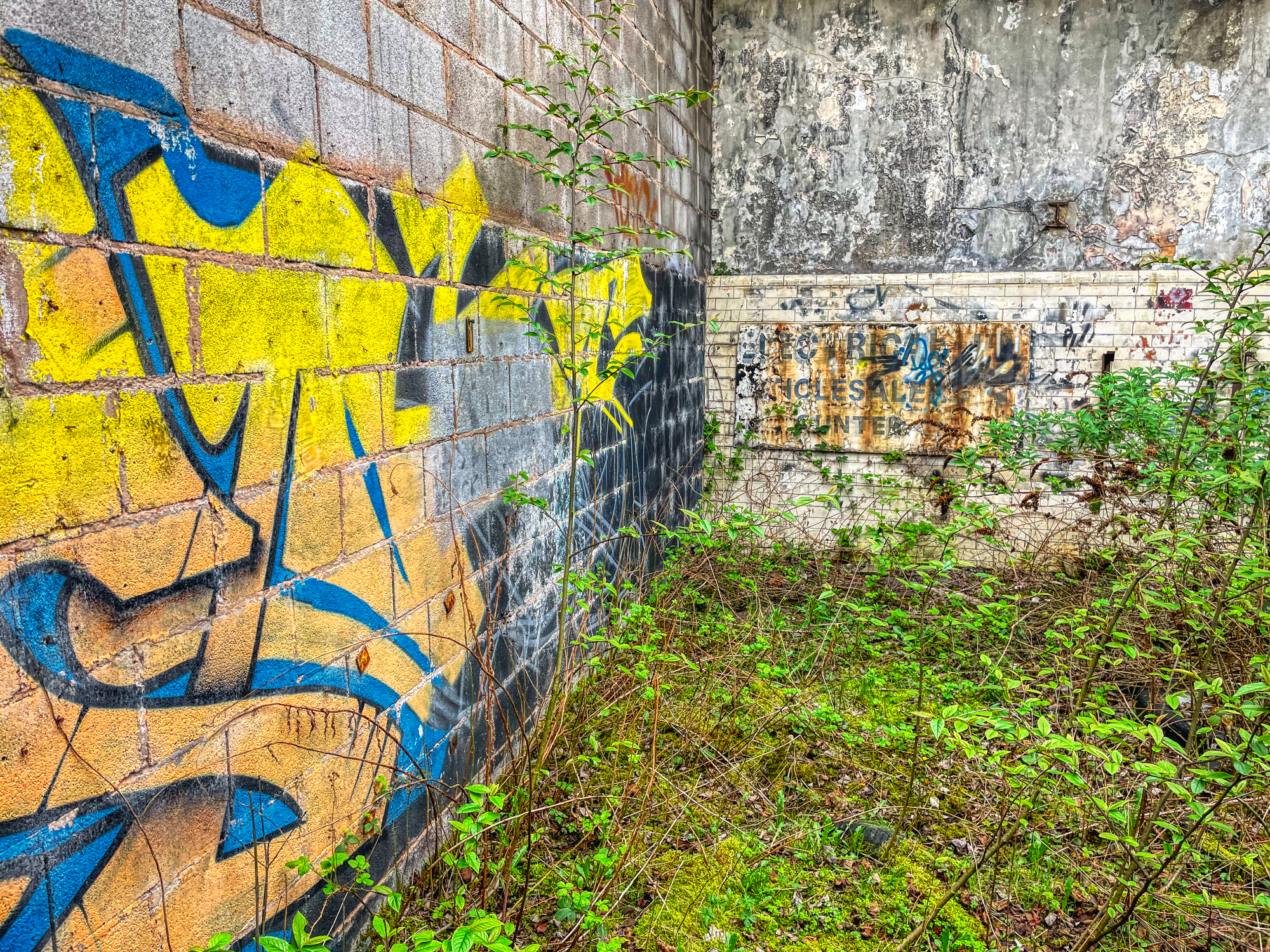 Not all the written graffiti had fared well. What does that say.., ‘Electrical Wholesale’... what? Let me know if you can figure it out. Well... this was getting exciting, and a little piss was seeping out of my pants. Could I contain myself for the blue sliding door? 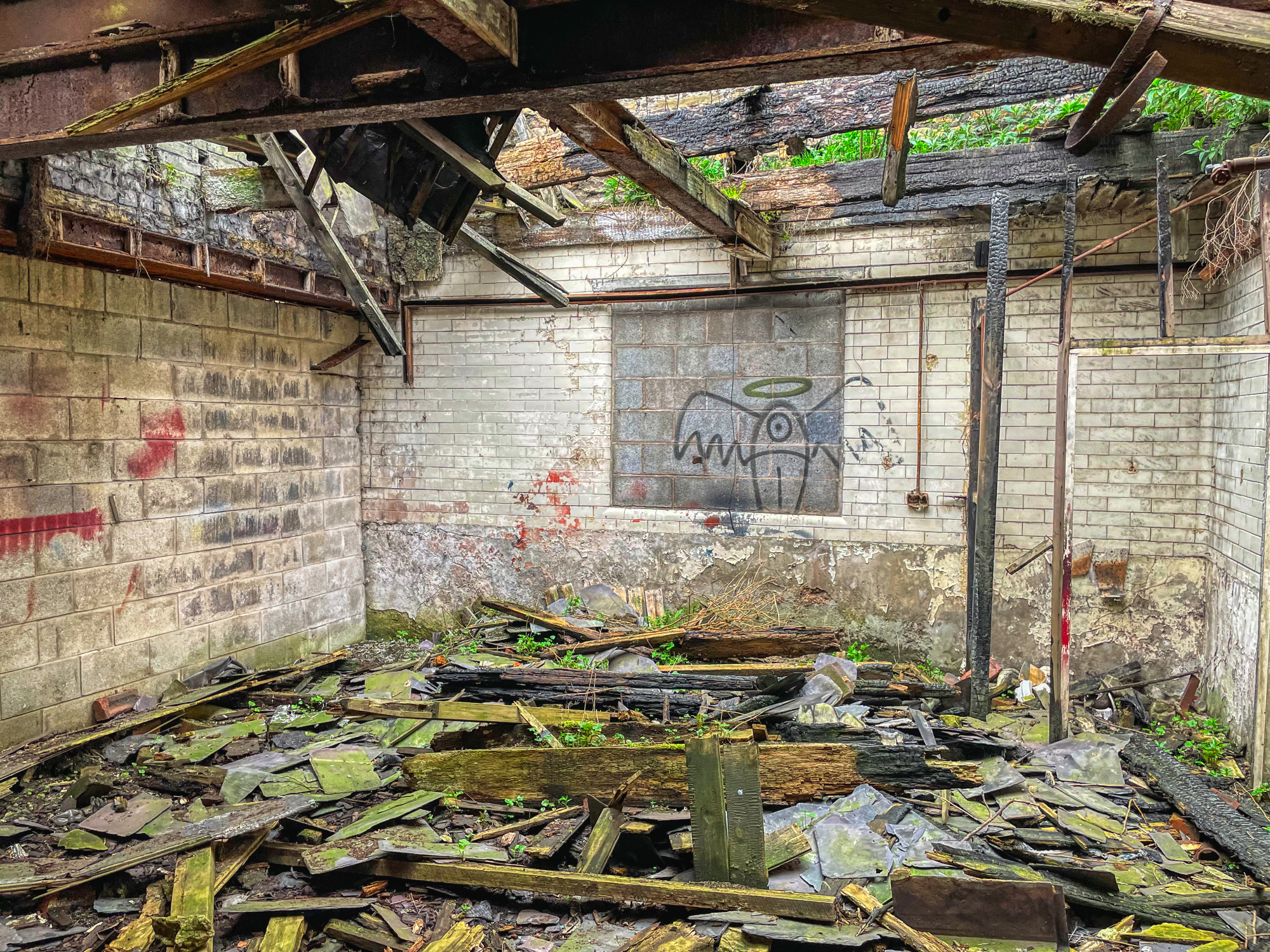 Yet another burnt-out room with a stunning depiction of 'Gabriel the Archangel' planted on the far wall. 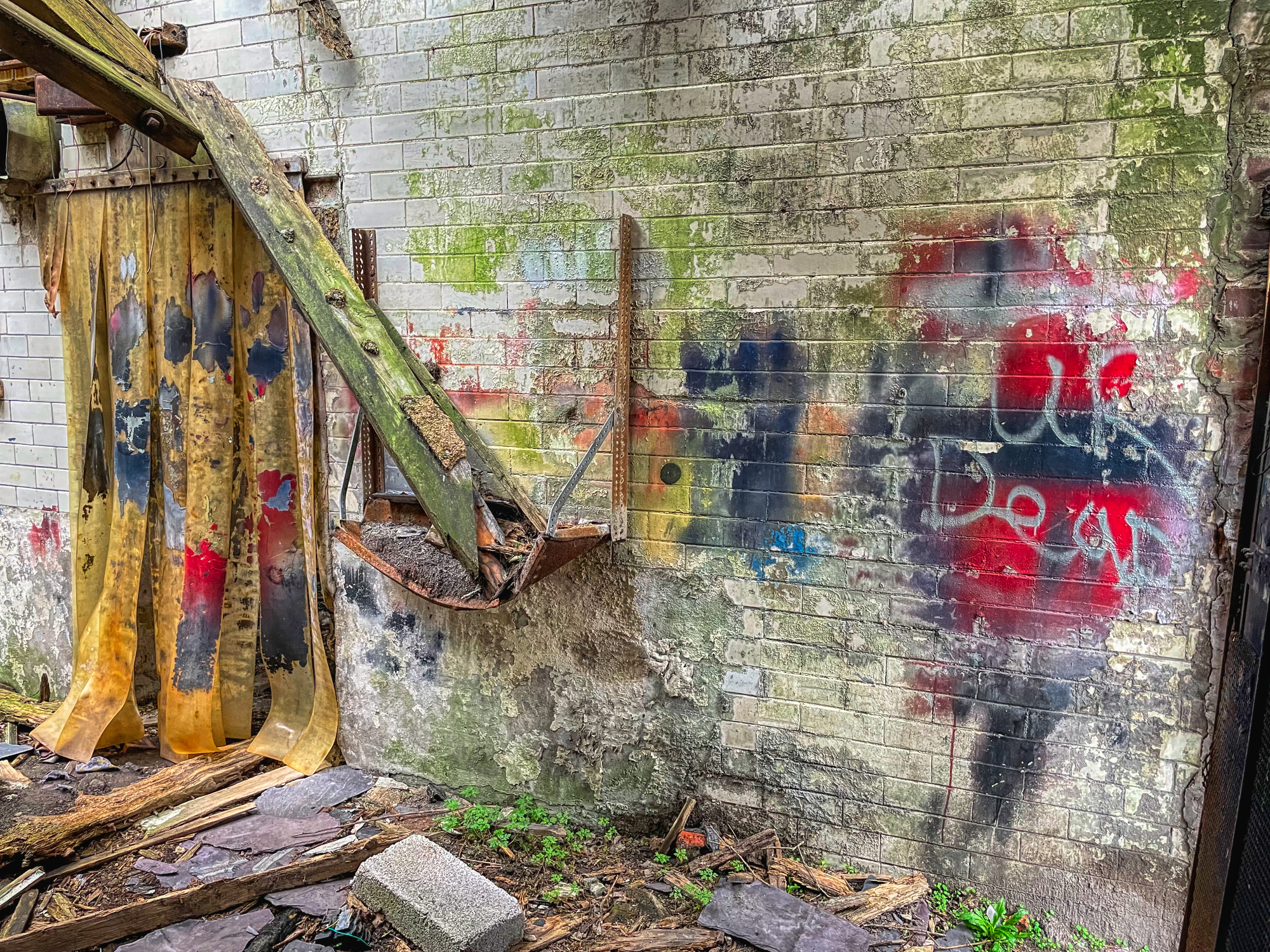 The draped plastic ‘curtains’ were looking daunting, especially with the ‘UR DEAD’ warning on the wall.

I could sense perhaps a Mad Butcher may be far-side and prepared myself to leggit like a big girl at the first sign of movement.

Peeling back the curtains I was semi-disappointed. It would have made for a better story. No angry red-faced madman… again. 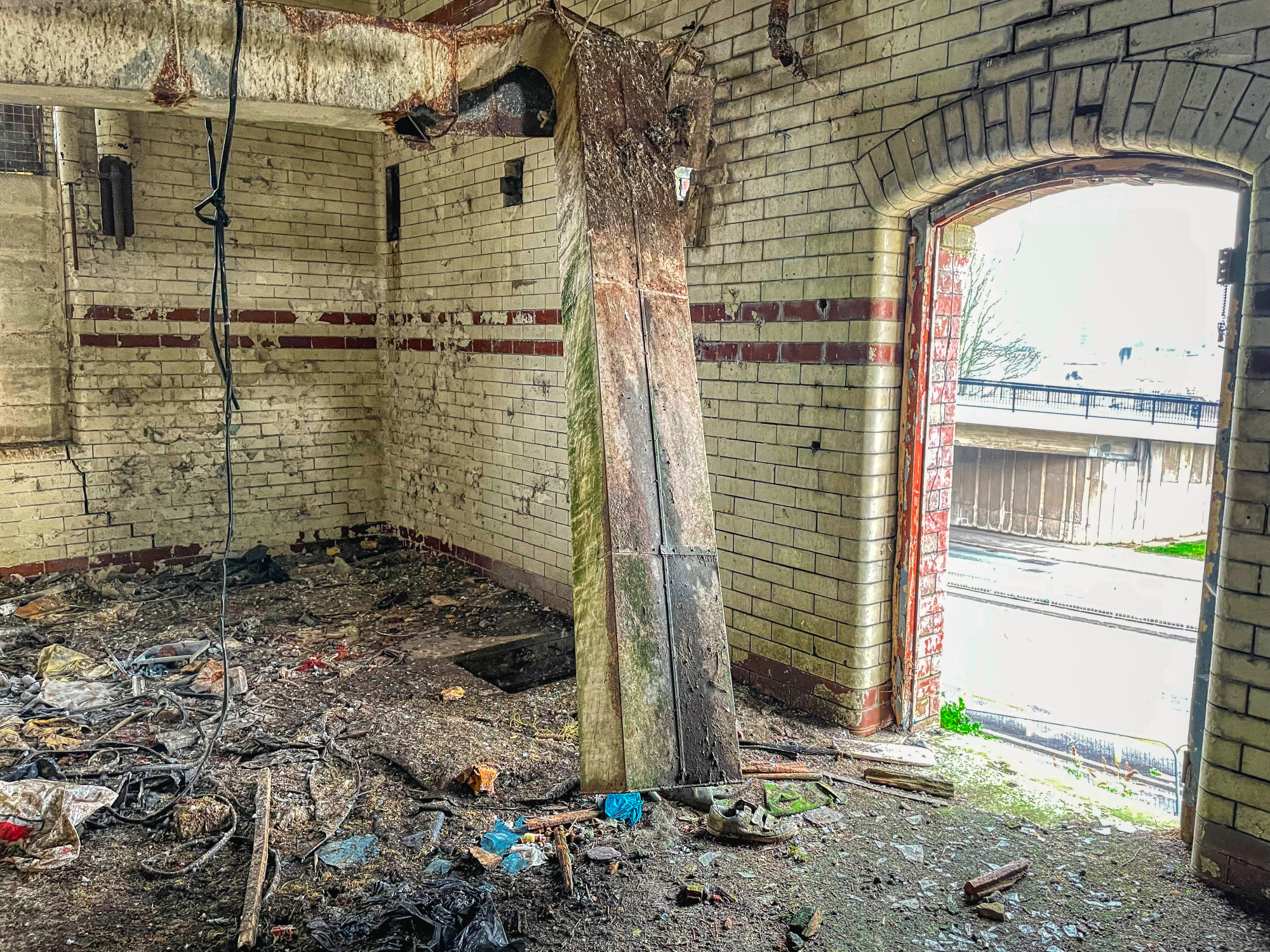 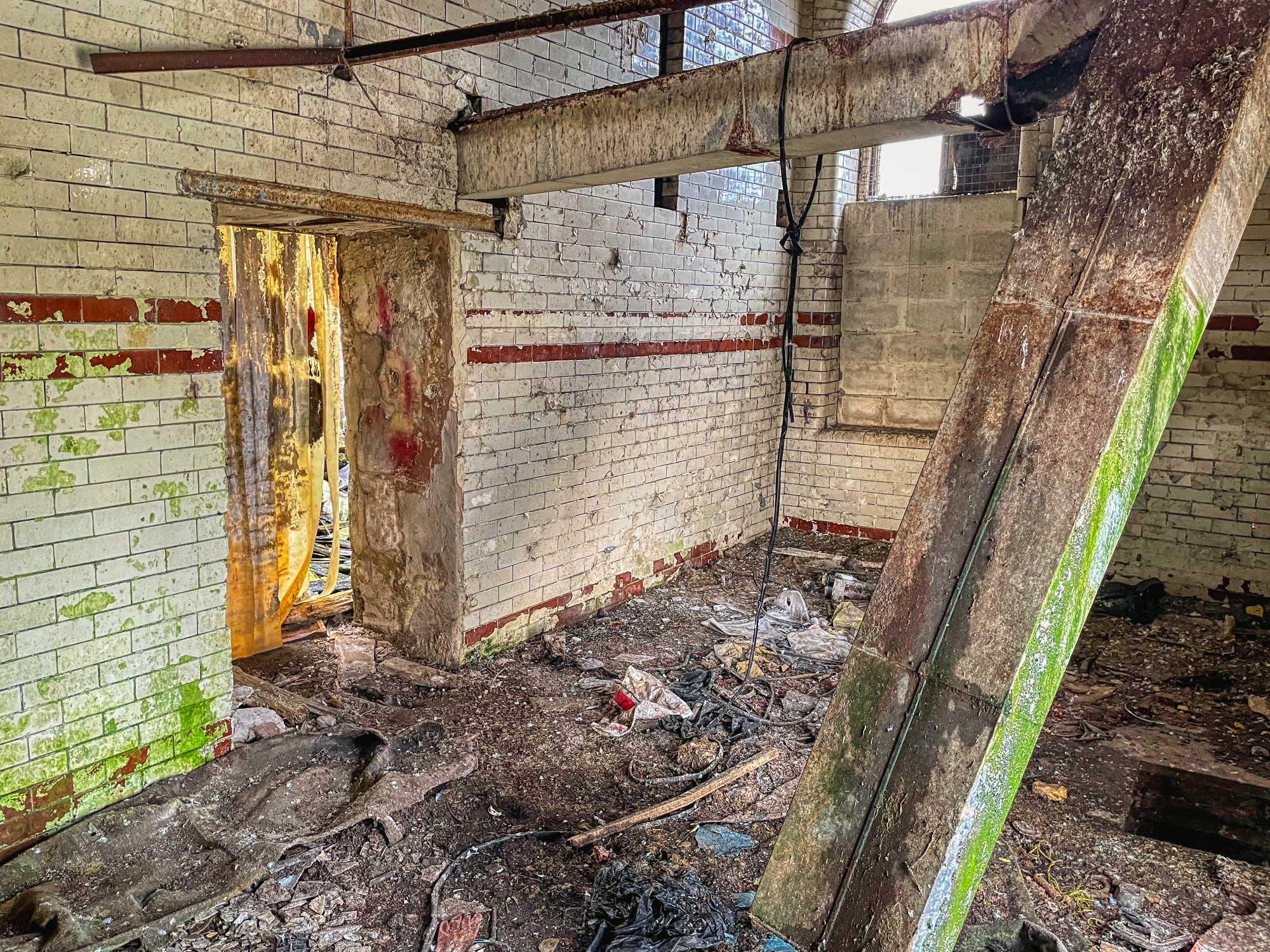 The room beyond did look like an old butcher's chopping room with the white tiles as well as a big hole in the wall with a severe drop. Exiting, I noted opposite what looked like a house, also boarded up, this one with bars. It’s of little use to smash the glass unless you can bend those apart. 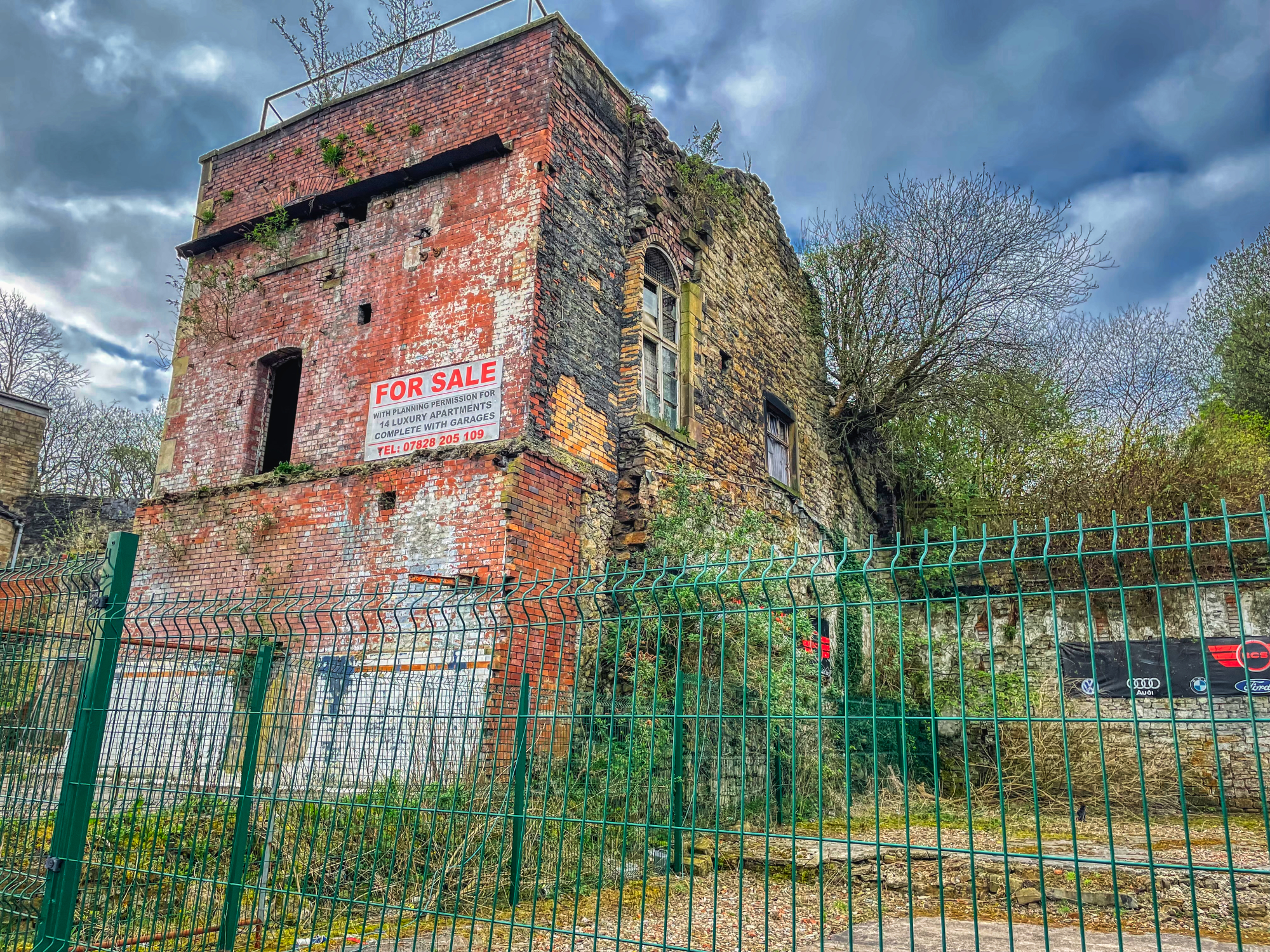 I don’t know about ‘Luxury Apartments’, more like ‘Fucking Eyesore’. That sign has been there for several years and nobody has made a move yet.

The makers of that anti climbing fencing will be coming for you!

It's valuable stuff, fencing you can climb up when you're not supposed to be able to. They have the market stitched up! Look around, you will see it everywhere.

I do see it everywhere. That's why I chuckle when you sidestep/climb it/push it out of the way! Lol

Twist your foot sideways and it will jam through the hole. The fencing may well fall over though, it's hardly sturdy. You can also lift it from the breeze blocks and then slide under. Quite laughable.

this is one I haven't done.. but ide definitely be out the car if I drive past. Great history in the place too 😊

My mum tells me she used to work there when younger. That is eons ago when it was a proper mill. I will show her this post, but I doubt it's even recognisable to her now. Much of it has been pulled down.

BOOOOO!
welcome to our world, I hope you enjoy your time here.

Welcome to Hive, hope to see your post soon🙌

We are a friendly lot, and don't bite :) Just ask @slobberchops

That was damn funny 🤣🤣🤣
I'm amazed how many abandoned building 🏢 you have found so far. If I ever go back to my country I'm gonna follow your footsteps lol 🤣

The talent of the local artists is something to behold. It should be hosted in The Louvre alongside the Mona Lisa. 😀

@slobberchops! You Are Alive so I just staked 0.1 $ALIVE to your account on behalf of @caelum1infernum. (5/10)

Also, is that "Gabriel the Archangel" a reference to something? If so, I don't get it.

The wonderful artwork just above the statement, surely you spotted it?
"United", I think you nailed the bottom word

On second thought, and closer examination on my laptop screen, I'm pretty sure it is not "united" after all. Perhaps a name or place? "Sunter"?

I see the image with the strange haloed, winged thing, but I don't know if that's supposed to reference some pop culture or subculture thing I don't recognize, or it's just weird art you have named.

I used to work at Starline Footwear in Rawtenstall during the College holidays.

It's just across from the old fire station.

It was an old mill re-purposed for making ladies' shoes.

Had a great time replacing broken panes of glass with fiberglass, using putty and a putty knife.

I also had a go at installing an industrial radiator pipe, cutting it to size, and threading the ends.

Those were great days, working with some real characters like the guy who operated the chain lift with his ginger hair and handlebar mustache.

You pulled the chain down to go up, up to go down and grabbed the chain to stop the lift, it was great fun.

Then there was Ken who kept the boiler fed with coal. He threw a lamb chop for his collie dog, it bounded over and licked it all over then turned its nose up and walked off. Ken picked the freshly licked chop up off the coal dust and, dirt-covered floor and promptly ate it himself, mumbling about how ungrateful his mangy mutt was.

I can imagine Albion Mill being much the same in its heyday.

I know where 'Starline' is. I used to shudder looking at the place. My experience of working the mills lasted less than 2 weeks. It was full of bullies and smoke rooms.., ugh disgusting!

I do wonder why I barely see anyone in these places. Gangs of thugs I would expect but they are never about.

That's probably a good thing though hahaha
I would prefer that myself.

Sir, history psychology is revealed in each of your writings, in the pages of history which we have seen you mentioned exactly, your writings were very excellent.

thanks for the tour.

Crazy stuff. At least the graffiti is better than the last time.Maybe to make an NFT out of it?😀

I couldn't do that, plagarism!

Like the vintage photo you found, brings it all to life

I try when possible to find old images, preferably taken from the exact spot. It doesn't half liven it up.. as you say.

This one kind of looked like a bust right from the get go. I guess you never know until you check it out though right? Sorry that it wasn't more exciting for you. I kind of doubt it would have been much better had you gotten in two years ago either.

I was more interested in uncovering the history. Much of it has been demolished, and this small part remains. Why?.. I don't know. My mother used to work here, way back in the last century. For me, it's what it was and sometimes not what's left.

what an amazing place this is!! just speechless..

Hiiiii
It’s for sale ! It will take some work but could be a great b&b! And just because I wonder do you ever find animals in the deserted places ?

I wonder do you ever find animals in the deserted places ?

I do.., foxes, rats, but mostly pigeons who are terrified and tend to mindlessly fling themselves into windows. I do tell them it's OK, we are not there to kill them but they don't listen. Stupid birds!

Ok rats 🐀 well I am done I think the moment I see one. But this property reminds me of a program we have here that people leave Holland to start a b&b in another European country and the property has to be abandoned and old , and the prices of making it into a b&b is the program. I am watching people start one in Italy and this looks the same but they had rats aswell. Yak ! But a read is perfect hahah

TBH, I don't often see rats and they are generally scuttling around the outsides. Rats don't like us and do their best to keep away.