Good day, Splinterlands! Splinterlands' Share Your Battle Weekly Challenge is back! Check out their post for the SHARE YOUR BATTLE Weekly Challenge! DHAMPIR STALKER if you want to join in too! Dhampir Stalker is the only Chaos Legion monster with True Strike ability at Level 1. And I think this card is one of the must have cards in Modern Format. This Ranged Attack card has a Rarity of Rare and part of Death Element. At Level 1, it has the True Strike ability wherein this monster's attacks cannot miss and at Level 5 it has Deathblow ability wherein this Monster does 2x damage if their target is the only Monster left on the enemy team. Let me share one of my battles using Dhampir Stalker. How did I use Dhampir Stalker to win? Let's look at it.

Here is the full replay in Splinterlands and Youtube 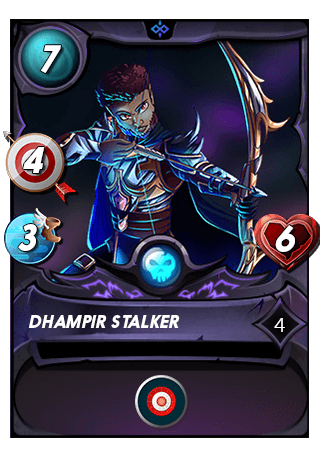 Here is a quick rundown of Temporal Master stats.

LORE
Half-vampire, the Dhampir are faster and stronger than normal humans. Most have taken to a mercenary lifestyle, never quite welcome with vampires or humans. The Stalker is adept at tracking their prey, then dispatching the target with a silent and perfectly-placed arrow from the shadows.

From his perch atop the dock master's building, Vilak observed the commotion below. There on the docks, crooked and bleeding among the fishing boats and merchant ships, was the corpse of a male. Tanned skin. Brown beard. Dirty clothes. Lifeless eyes staring up at the night sky...

The Modern Format rulesets for this fight are NOXIOUS FUMES wherein All Monsters start the battle Poisoned and LOST LEGENDARIES wherein Legendary Monsters may not be used in battles. The maximum amount of mana allowed is 30. The available elements are Earth, Death, Dragon and Life. Dhampir Stalker has high attack damage which will be beneficial to the team. The damage that it will inflict to the opponent plus the damage from poison will surely make the opponent's HP miserable. To add to potent effect of the poison and Dhampir Stalker's damage, I used Thaddius Brood as my summoner to decrease the opponent monster's HP by 1. I also used Cursed Windeku with Thorns to further add damage to melee monsters from the opponent side. I then used Xenith Monk with Heal to offset the damage from poison and to act as shield for my Dhampir Stalker against backline attackers. In the first round, even though enemy Pelacor Mercenary has Flying ability, which decrease the chance of getting hit by melee and ranged attack, Dhampir Stalker's attack hit it with 4 damage.

In comparison to Dhampir Stalker's attack that did not miss, Silent Sha-vi's attack on Pelacor Mercenary missed even though Silent Sha-vi has higher Speed.

Also in Round 2, Dhampir Stalker's attack did not miss again against Pelacor Mercenary. And in Round 3, Dhampir Stalker's attack did not miss again against Pelacor Mercenary for the third time. Dhampir Stalker's sure hit made a huge difference in this game because Pelacor Mercenary has high HP that can withstand poison longer than other monsters. If Dhampir Stalker's attack missed, it will die first. I won and earned 11,350 Reward Points and 0.219 SPS in this battle. And my rating increased by 21.

The plan to concentrate on inflicting damage to the opponent using Dhampir Stalker worked well. In addition to the damage received from poison, enemy will also surely receive damage from Dhampir Stalker. Good thing that the enemy has no Heal ability or Cleanse, because Dhampir has low HP to counter balance its high ranged attack damage.

That's it, and thanks for reading. If you're interested in playing Splinterlands, here is my game link - splintercell-01.
Visit @Splinterlands to view more amazing posts! And always keep on battling!!!
*Images used are from Splinterlands and Peakmonsters and edited in Canva.
splinterlands hivegaming hiveph oneup thgaming playtoearn neoxian ocd pgm proofofbrain
0
0
0.000
3 comments