@stayoutoftherz 75
about 1 year ago (Edited)
The Chess Community

the sixth round of Hiveches season 5 was a fast one with 2+1 and many games and blunders as well. @sawko won as usual, followed by @yazp (zulukill). Congrats also to Hivechess-Newbie @maverieux000 (Keylix) for his great third place in his first appearance, even before former champion @jaki01. For me it was a disaster and I landed on the 8th place only, second worst result ever in Hivechess.
Next time we will have a slower time mode again! No changes in the top ranks. @maverieux000 (Keylix) could with his good result immediately jump into the midfield, and also @zacherybinx (sirtetris) could win his first points in this season and jump up a few places.

See you all next week and keep practicing.

By the way, tomorrow starts the Finals in the Magnus Invitational Rapid tournament between Anish Giri and Ian Nepomniachtchi (who kicked out Magnus Carlsen)!

It also looks like competition in tournaments is getting stronger :) Way more people around 2k rating than before.

Hope for slower time control and better result next time.

Thanks for having me !
I look forward to the next round (s)
#chessislife

By the way, tomorrow starts the Finals in the Magnus Invitational Rapid tournament between Anish Giri and Ian Nepomniachtchi (who kicked out Magnus Carlsen)!

It would be better if I watched the semifinals than I participated in the tournament. Bullet games are too fast for me and my mousepad… But it was fun as always. Thanks!

I saw the Tie Break of the match Magnus vs. Nepo on a Youtube video afterwards. Sad for Magnus to lose in that Blitzgame after his comeback in the Saemifinal. But Nepo had the better nerves!

Here is the breaking point: 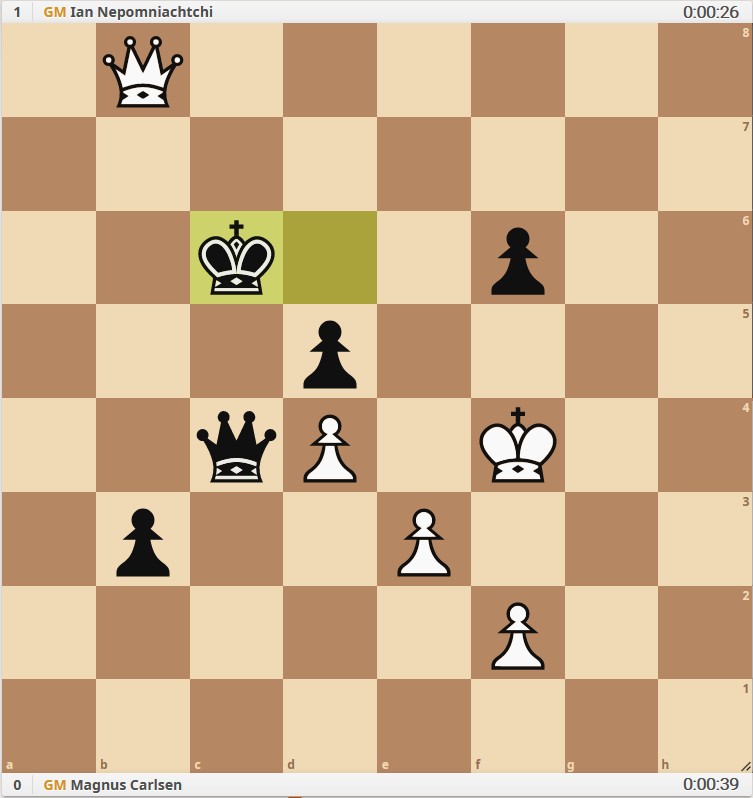 This format was too fast for me. I need more time to think about my moves. Otherwise I have no fun with it.

Yes, for the rest of the season it will be slower again.