The Exponential Nature Of Cryptocurrency

Humans are not designed to think exponentially. We are mostly linear thinkers which means, when it comes to technology, we tend to underestimate the long term implications.

This is true throughout the last 30 years, one of massive technological progress. However, few of us caught on to the potential due to our inability to grasp the compounding factor that is so common with technology. It is for this reason that the likes of Facebook, Apple, and Tesla were underestimated by Wall Street. They simply looked at those companies like any other.

Cryptocurrency is, first and foremost, a technology. There certainly is the monetary and financial component to it. However, the key word in the phrase digital assets is "digital". This puts it in the realm of computing, something we know advances at a rapid pace.

It is important to not lose the tie to blockchain. Here we also see the rate of change enter the picture.

When we put it all together, the idea of rapid advancement over the rest of the decade will be clear.

By now, most of us are familiar with the idea of advancing computation. This was best summed up as Moore's Law. For those unfamiliar, this was an observation made by the CEO of Intel who concluded the number of transistors on a chip were doubling every two years. When this was taken over a 50 year period of time, we can see how computing moved from the 1970s, where it filled rooms, to now.

There is great debate about how valid Moore's Law is these days. Many believe things are slowing down.

We can see there is some basis for that viewpoint. Here is a chart of the supercomputers in the world. It lists the total along with a couple on the list. 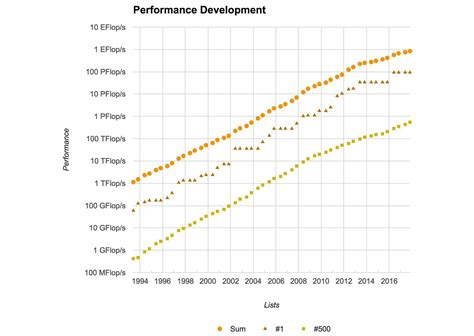 The trendline that was in place from 1994-2012 has flattened out a bit. This means we are falling further behind in this area. Of course, long term trends see a reversion. Here we can expect a paradigm shift in computing to take place that will get us back on track. This could be seen by the end of the decade.

Either way, we still keep advancing. Computing power is still gaining and speeds are increasing, just not at the rate we saw before.

Then we have Internet speeds. Here is a chart that lays out what took place over the last 30 years. 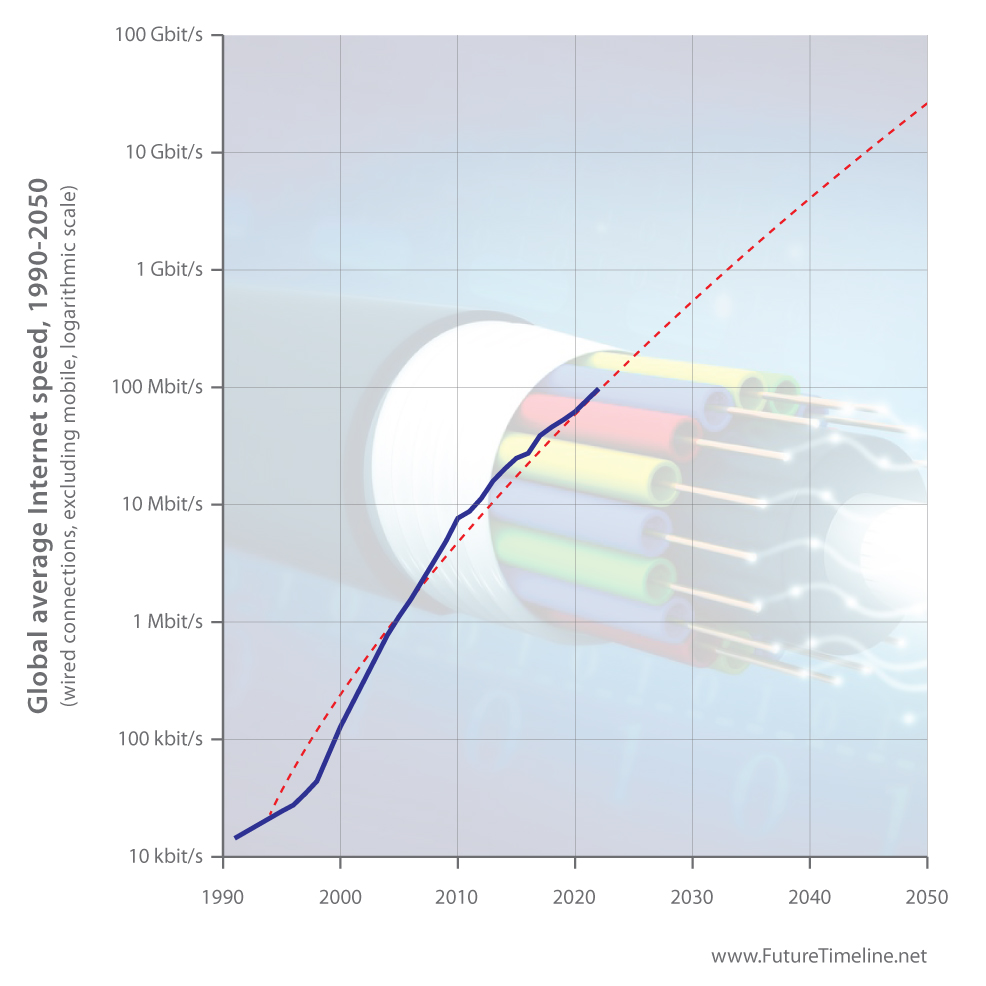 If this projection is correct, which is just following historical trends, those who are still around in 2045 will see speeds of 10 GBit/s. Keep in mind, this is a logarithmic chart so the exponential rate is even more impressive than plotted here.

Both of these are fundamental pieces in what is taking place with cryptocurrency.

The world of computing and its trends are undeniable. Over the last 40 years, we saw major advancements in all facets. We could post charts concerning memory, resolution, and voice recognition. They all follow similar paths.

Cryptocurrency is digital in nature. It stands to reason it will follow a similar path to other digital applications.

For example, here is a chart of pc gaming sales since 2008: 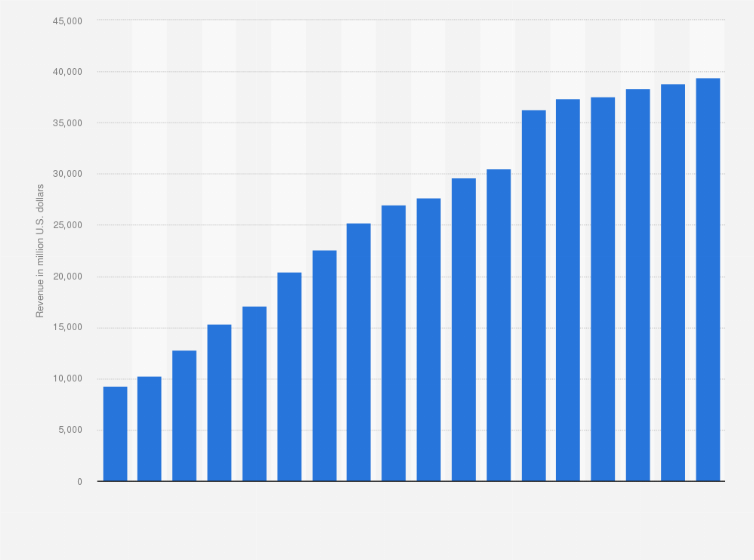 The idea of money being digital is nothing new. We all know the amount of transactions involving banknotes dwindled over the last few decades. At the same time, settlements among banks and financial institutions are not done using cash. They do this electronically, with computers simply moving numbers on the ledger.

How does this apply to cryptocurrency?

When we build in the digital nature of things, we know expansion is happening at an amazing pace. Each year, more nodes are set up. With the growth of Internet users, we see more network effects. Automation is becoming commonplace. The amount of memory is jumping which is necessary because the data produced keeps exploding to insane levels.

Blockchains are growing also. We see optimization taking place that is allowing for more traffic. The number of nodes involved also sees a jump. There is more infrastructure being put in place which, when coupled with more software, is pushing things further along.

In short, we are recreating the Internet with one major difference: the ability to conduct commercial activities is now native. This is thanks to cryptocurrency.

At its core, cryptocurrency is nothing more than data. It is a characteristic to the understanding of where things are going and how exponential growth is the future with it.

To frame it another way, think of what truly happens when one trades a certain amount of tokens for a NFT. What really happens here? Essentially, we are trading data for data. Everyone focuses upon the monetary values but the transactions is data moved from one wallet and replaced with a different packet.

Here is a charting of the number of photos taken.

It is now reported there are more than 3 trillion pictures taken each year. This is how powerful the switch to digital is.

From this, we can conclude that NFT creation will follow something similar. Think of all the value that is created there. Sure, most of them are going to be totally worthless. However, as with photos, there will be some gems. The point being, many will have value to some people.

The bottom line is expansion. With more games and applications appearing, the digital world keeps growing. Online commerce is not slowing down. Web 3.0 is going to usher in new concepts that tie a lot of this together.

At the core is cryptocurrency. The USD, Visa, and Federal Reserve are not native to the Internet. Cryptocurrency is.

For this reason, it makes sense that we can apply technological trends to it. Even though there is a monetary component, we are seeing how the technical angle tells more of the story.

Found this chart, crypto adoption is going to be a straight vertical line The smartphone in the US was. It went from near zero to 70% penetration rate in the US in 7 years.

With digital a lot of this stuff can speed up. Application and gaming adoption can be much quicker.

I think it's obvious because there will be no people left to adopt. 😂

The world of computing and its trending I'd undeniable. This is certainly true. Without the system of computing, we wouldn't know more about cryptocurrency.

And, I want to asked! Why is cryptocurrency digital in nature?

As time went by, Cryptocurrencies will gain much more in terms of the technological aspect and if by using them we can get some economic benefit, we will achieve the perfect balance

Here we can expect a paradigm shift in computing to take place that will get us back on track. This could be seen by the end of the decade.

So like quantum computing would be the shift and then it would start compounding again from there?

Being in the Hive ecosystem and witnessing development consistently makes me think cryptocurrency is exponential naturally. I was reading Splinterlands Town Hall earlier today and the developments coming up were overwhelming I just couldn't assimilate everything at once.

And come to think of it cryptocurrency is still in its early stages.

The USD, Visa, and Federal Reserve are not native to the Internet. Cryptocurrency is.

Crypto is revolutionizing online commerce. It has opened up new ways to make money flow all over the world without any restrictions or requirements of third parties. ✌️ Not long ago if somebody told me that I could make money by delegating my stake to some curation project, I would laugh at them.

It makes more sense seeing the chart, how data can be exchanged for data just on different value, that is a good work.

Crypto currency is the native of the internet, with time history would be told of your Post.

These years more and more participations are raised to ensure the safe passage of digital money being implemented. If the technology in this age takes us to the state of improvement consistently, then the financial sector wont just sit and lag behind.
Its so succinct a viewpoint to measure the blockchain as plain data.
👍