Time Increase Our Support For POSH

Of late there is some conversation taking place regarding the POSH project. This is a good thing and something that all should consider partaking in.

It is an idea that should in adopted by people on Hive as part of their daily routine.

Basically it is a way to reward people for sharing Hive based content on Twitter. It is meant to incentivize the posting of a few links per day in a way to garner more attention for Hive. Rewards come in the form of both POSH tokens on Hive-Engine as well as HP/HBD payouts.

All this for simply sharing a link or two.

Unfortunately, it seems that some are trying to game the system in an effort to collect easy rewards. This was discussed in this article.

For this reason, we will cover some of the mechanics of the project and how it should be approached. 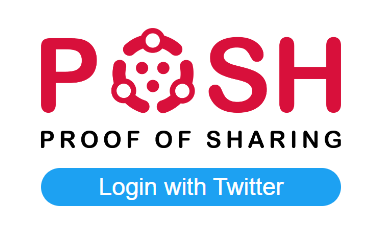 How Does POSH Work?

It is a rather simple concept.

Before getting involved, it is vital to sign up for the service. This is done at Hiveposh.com. Simply link your Hive account with Twitter and you are good to go.

The next step is to take some Hive based content that you find worthy and send it out on Twitter. It doesn't matter which front end you link to as long as #hive or #posh tags are used on Twitter. 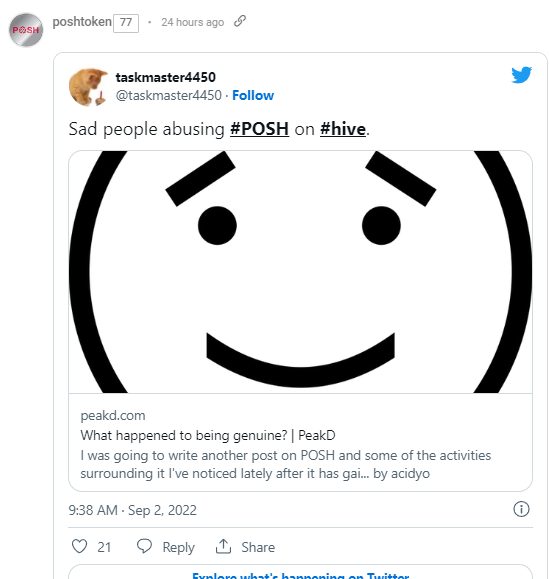 A week later, payouts are collected. Here is a screenshot of the HIVE payments in my wallet from the sharing a week ago.

It is that simple.

Where Do The Rewards Come From?

The payouts are interesting. They are actually author rewards for the comment that is being left. When the bot places a comment, it is tied to the individual(s) who shared the links. As you can see from that screenshot, it is now tied to my account.

Any upvotes the comments get means that individual is going to receive some rewards. As you can see, it is not enough to make one wealthy but it is a nice return for sharing a few posts.

Here is where we come upon our first major suggestion. Since the author rewards come from upvotes on the comments, it is important to add an upvote whenever you see one of these. This is especially true it is appearing by someone else in your own article. It only makes sense to incentivize those who are helping to share your content.

Another pointer that was recently discovered. If you upvote your own comment (you share the link and get comment from the bot tied to you), the Hive rewards get sent to the Decentralized Hive Fund (DHF). This is basically a way to prevent everyone from self voting. Anyone else tied to the comment will get the payout.

There is going to be an addition to the POSH project. It will be expanding to include LeoThreads. Hence, when a link is shared on that platform, similar to Twitter, it will also be eligible for rewards.

This is a major step forward, not only for POSH but also for LeoThreads. We are looking at microblogging becoming a part of blockchain. It is helpful to incentivize the usage.

Here is an announcement by Acidyo. 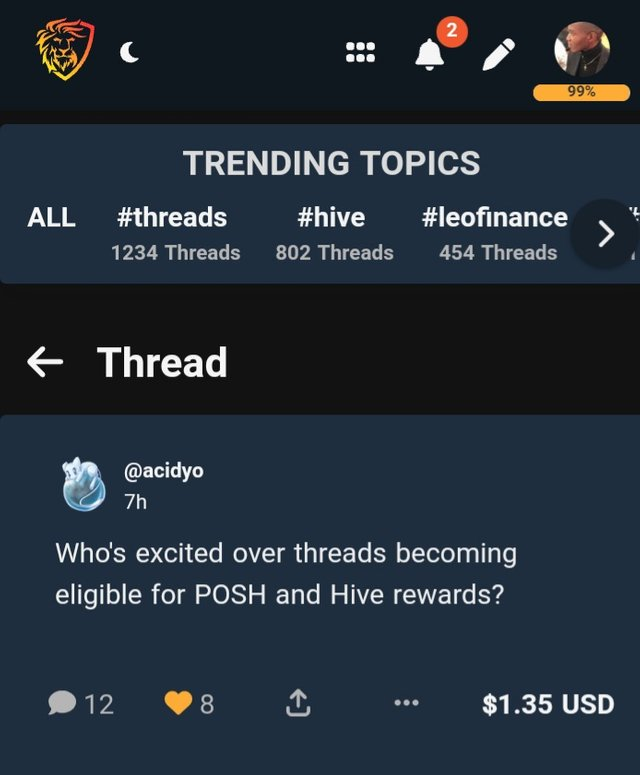 Be aware, the inclusion in Threads, to my knowledge, is not available yet. We can expect an announcement when it goes live.

Don't Be An Abusive Jackass

Sadly, as the article referenced above shows, people simply cannot accept good things handed to them. They have to abuse, pilfer, and try to take shortcuts. For that reason, do not be a jackass.

Use the service the way it is designed. It is not a get rich quick (or even slowly) scheme. It is simply a way to incentivize the sharing of content that you find worthwhile on Twitter. For that effort, you could receive some small rewards.

Also, do not fill up your Twitter feed with dozens of articles. That will only upset your followers there.

My suggestion is to target 3-5 articles throughout the day as an acceptable level. A couple articles here and there aren't going to upset people. Try to find since content that isn't always being shared since, after all, this is meant to help with content discovery.

Quite frankly, there is no reason why 1,000 articles cannot be shared on Twitter each day. It only requires a few hundred dedicated people to consistently participate.

Being Part Of A Community

We often discuss the concept of community. That means we all have a role to play in the Hive ecosystem. Since there is no marketing department, it is up to each of us to take the little actions to bring in viewer. POSH is a project that is here to incentivize people along those lines.

It is a simple action that can be taken daily for some results. As they say in baseball, the singles add up. Getting more links out there for Hive based content is something that is needed. Over time, we should be able to share hundreds of thousands of them.

As always, when it comes to cryptocurrency projects, you never know how one will evolve. For the time being, use POSH as it was designed. We might be surprised what they add down the road.

It is time to start sharing.

I wasn't entirely sure last time I heard you write about POSH coming to leothreads and looking back at the screenshot I understand now how the wording may have been confusing but basically:

We're not going to consider leothreads like twitter, i.e. you won't be earning POSH and Hive from the poshtoken comments for writing threads. It's not really aligned with the idea of what POSH is trying to tackle, bringing people from web2 over to web3 as leo and threads already are web3.

What I meant was that since leothreads work differently, like, they have slightly different links than if you were to share a peakd comment link for instance (and god knows most people's pc's would lag stuck trying to open one of the leothread main posts up), so instead we're going to make POSH be able to recognize leothread links that are shared on Twitter.

Our ask to @khal would be to give the leothread links a preview so that people seeing them in a tweet would get the gist of what it is about before opening it up and being taken to the link to engage with, then depending on how that leothread link did on twitter with likes and retweets, it would be able to earn POSH and if the poshtoken comment left as a reply to the thread gets upvoted we'd also send the author Hive and possibly LEO as well. (the leo part would need to be implemented too).

PS! Can't stress this enough, only the #hive tag is required when sharing a link on twitter, not #posh :P

Oops. What a bummer!!! I was getting so excited for no reason :( But it makes sense because we are already on Web3.

Leothreads are just comments on Hive. Not sure how you provide a preview of a text, maybe you can. Because most threads are text only.

Well, nothing stopping leo from delegating to poshtoken to earn posh or buy them up from the market in an effort to reward the most engaging leothreads, but yeah there too it wouldn't make much sense. :P

The POSH marketing mechanism is a good one for Hive and we owe it to ourselves to use it the right way. Idk if there are ways to curb the milking act but if the good ones outweighs the bad, we are good to go. Can't wait to start earning posh through leothreads, such an exciting moment for threaders.

Hard to stop anyone from milking things. The only way is to get people to be focused upon what the service offers and why it is such. Have people do 3-5 or so per day and see how it flies.

I POSH everyday. :') Great to see so many Hive blogs being shared on Twitter. As you said, we need more people onboard to support this initiative.

Good deal. I try to also. Get a few out each day to help the cause.

Quite frankly, there is no reason why 1,000 articles cannot be shared on Twitter each day.

@acidyo, can we get this data? How many Hive articles are shared with the #Hive tag every day? If it's not 1000 already then we have a goal to reach. ✌️

Hard to say exactly, we had a glitch recently that counted retweets for a couple of days so the number on the @poshtoken posts was not accurate for a couple days. The latest one is accurate at 411 eligible tweets but it doesn't count those who get no likes or retweets.

There's quite some work on improving and removing some that go just above the minimum requirements in an attempt to leech posh or hive rewards through alts/bots but I'm sure we'll get there.

411 eligible tweets but it doesn't count those who get no likes or retweets.

Alright. Those who don't get any likes or RTs don't matter anyway so. 411 is a good number I guess. Looking forward to more improvements. Screw the leechers.

Waiting to launch the newly designed website first then work towards placing the buy and mint process on there for everyone, pretty excited about that!

I would think is we get 200 people involved (I think Acidyo said there were 2,000 accounts signed up), doing 5 per day, it would hit it.

As I said, this seems like a minimal amount. It doesnt take long to get something out there.

Sadly, as the article referenced above shows, people simply cannot accept good things handed to them. They have to abuse, pilfer, and try to take shortcuts. For that reason, do not be a jackass.

I promise not to be a jackass lol!

It is good POSH will be coming to LeoThreads soon, my advice is for people to sign up for it and not forget like me, I only signed up for it 2-3 weeks ago and have been sharing my content on Twitter for over a year.

I misspoke. It is not coming to threads per se. So we have to keep tweeting to get it.

Thanks for sharing I learned something new from hive. Also shared your post to test it out.

First of all, any project that helps to promote Hive will be welcome and if at the same time we can earn HP or HBD, better yet, I will link my Twitter account to start earning Posh tokens

POSH has come to stay, and is bringing the best outcome.

I never opened a POSH account, but I did add @poshtoken as a beneficiary along with @hive.fund as a way of showing support as I build my stake. I love the ability to use web 2.0 to promote web 3.0 properties and to get some of that value back from the predatory social media firms.

I don't know that I'll ever link my Twitter account as I tend to be shall we say, more expressive over there. I'll continue sharing Hive and LeoFinance content to my larger Twitter audience and allow any earnings on the POSH comments to flow back to hive.fund. It's a win all around! :)