Here Is What To Expect With Threads

@taskmaster4450le 79
about 2 months ago (Edited)
LeoFinance

Many of us feel that things are going to start changing in a major way with Hive. The fact that Leofinance is bringing microblogging to the blockchain something we have discussed for a couple years.

By this time tomorrow, it will be out in the open for anyone to use. For that reason we should cover some of the basics. Over the past couple weeks, I was part of the team testing the features and helping to uncover bugs. There were many but the team did a great job getting them cleared up.

That said, there are some things which are important to note. 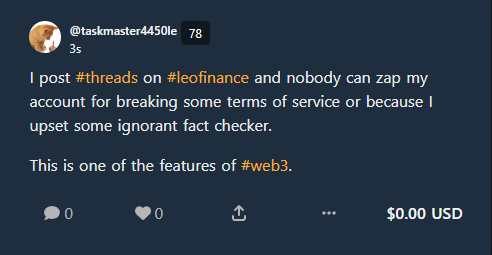 This is a MVP. Therefore, it is important to note that, while expectations are high, do not look for a feature rich experience. It is not there..yet.

I was told there will be a rather large update a few weeks after Threads goes live. The team is aware of some things which need addressing but have to work out ways to add the features while also keeping the security of the system in place.

For that reason, people should temper their expectations in terms of what can be done. Also, don't bombard the team with a list of a thousand things that are needed. There is already a full lineup of features that are being worked on. Unfortunately, even in testing it was discovered that if one thing was changed, it affected something else. For this reason, some "basic" features had to be shelved until something more robust can be put together.

This is being put out by Leofinance and is going to be housed on Leofinance.io. That said, unlike long form content, any topic is acceptable on Threads.

If is a full use feature.

This is going to appeal, hopefully, to a wider range of users. Many people are not cut out for long form blogging nor are many of them interested in finance or investing. While cryptocurrency aligns with many, it is still something many lack the knowledge to write about. This is a barrier for many.

With Threads, people will be able to microblog about any subject. This will likely stimulate more engagement on chain. After all, we have people on Twitter and Discord for hours, now there is a place to hang out which should help the overall numbers.

The data is all housed on Hive. The feature utilizes the decentralized database that it provides. We also see the monetization through LEO and $HIVE. From a backend perspective, threads is really just a comment. Thus, upvotes are just like any other comment.

For outsiders, this is a very simple way to get started in Web 3.0. The only difficulty is the fact that some of the features are a bit rough at this early stage. That aside, anyone who knows how to Tweet can use LeoThreads.

While the main onboarding might not come until the full application is released, we can start the process as we see things start rolling out.

Hive As A Social Media Platform

We discussed earlier how Hive is becoming a social media epicenter. Keep this in mind with all your Hive activity.

For example, Threads is to be thought of like Twitter. Thus, make sure you use it to market your other content. If you write an article, send it out as a Thread. This will help to develop another link for your post while possibly getting it some more exposure.

We need to stress this is just one piece of a larger puzzle. Ultimately, when the standalone application is released, we want to encourage non-Hive content creators to utilize Hive's microblogging as a way to expand the reach of their content.

Threads can also stimulate more engagement. We have joked around about the numbers that Threads can put up. The truth is they can be rather large. A Thread takes very little time and the back-and-forth can happen quickly.

We tried to stimulate engagement over the last couple years with limited success. Threads is a way to really increase the activity.

The key will be to have fun and enjoy the latest feature being brought to Hive. It is the start of a paradigm shift.

I just wanna know....Is Threads the brand name for Project Blank when it's 100%?

If so...It works! And I would love to see it grow into it.

I don't believe so but I am not sure. We will have Khal on the show next Friday so we can ask him about it.

That was not the name I recall from earlier.

The fact that it's going live is something to be excited about. Good job to the LFT.

It is a major step forward. Glad we are embarking upon the first step. After that, we can get some updated with newer features added.

This sounds like a major step forward. I understand that many long-time Hivers dislike short content, but every post cannot be a 10-minute read. That does not fit into our fast-moving, always-updating world.
I feel that is a definite step in the right direction.
Thanks for breaking it down.

The fact that it takes place at the comment level is important. That means it is separate from long form content which shows up at the blogging level.

@rezoanulvibes 75
about 2 months ago (Edited)

It is exciting to see Threads is going to be live. And what we are doing on Twiter, we can do that on Threads. It will give more exposure to LEO and Hive.

And what we are doing on Twiter, we can do that on Threads.

Eventually. It is going to require some upgrades. A lot to do. We are only seeing beta roll out.

Thus, make sure you use it to market your other content. If you write an article, send it out as a Thread. This will help to develop another link for your post while possibly getting it some more exposure.

I like this. An excellent development for me looking for a "thread" where I can share my posts.

The key will be to have fun and enjoy the latest feature being brought to Hive. It is the start of a paradigm shift.

Yes, that's what we're missing when we are too serious with our content.

I like that non-censorship. Still fresh in my mind when I was warmly welcomed the first day on one social media, became a celebrity the following due to a recommendation from a community influencer, and then banned the 3rd day for reasons I didn't know.

It all does start to tie in. What people discussed for the last couple years is emerging before our eyes. This is a big step forward in the evolution of the Hive ecosystem.

Grateful for your hard work and for the team.

I never used Twitter much, I didn't understood what's the point of it besides FB. Curious how Threads will turn out.
!PIZZA

Since I have embarked on reviving the Uganda Hive community, I will be using threads as a the marketing strategy to bring in normies without explaining to them so much crypto lingo.

Anyway I am all waiting for the release a few hours from now.

Now we are awaiting the fixing of bugs and scaling.

All part of the process. Things are stepping forward, even if at a slow pace.

I am interested in seeing how well these threads go and how much they will appeal to users. I do think the extra ads will help in the revenue aspect but I think there needs to be an app for it to take off.

The fact that it is desktop based to start is an issue. However, that will be cleared up in time. Need to get some of the basics (infrastructure) in place first.

Good to hear that everything is coming together, it is a gradual process and everybody should understand that. One step at a time. Leo thread will be an amazing way to promote your content

It is a process that starts to accelerate since we tend to see things start to tie together quicker as the baseline of what is out there is raised.

Web 3.0 applications can actually leverage each other.

Sounds promising, hopefully we can accomplish the resource credit part as well, with delegations for the new users. All of these moving pieces are getting a place like hive to get a lot more attention in the long term that’s for sure!

The RC delegation update with the next hard fork is actually well times. As these applications require more RCs, they can tap into their user base easier.

So it is all starting to come together.

that is the important thing to recognize the flaws and work harder to correct them in addition to innovating. Patience is going to be key to achieving all the Threads goals.

We all have a role to play and getting involved is what will really help. The infrastructure is going in place yet the rest of us have to test and add.

It is only on desktop and yes there is a "threads" tab next to community.

Undoubtedly this is a great initiative by Leo that opens the doors to a great number of possibilities, I would like to be part of this test phase and start using this new feature to write my opinions as a user who is not an expert in this development and at the same time add my contributions to make it become something great. Thank you very much for letting me know about the existence of this new function within hive that as you say every day changes more and more to adapt. A big hug.