Leofinance As A Major Future Of Hive

One of the keys to the future of Hive is going to be the applications that we build tied to the blockhcain. Whether it is gaming or communitieis, it is important to keep this in perspective.

This is especially true when we see the bear roar and prices get hit even further. As we know, the price of %HIVE is crushed along with the rest of the cryptocurrency market.

@khaleelkazi wrote up a good analysis of the situation in his article Is Now A Good Time to Buy HIVE ($0.35)?.

We often discuss the difference between price and value. We see the price of $HIVE down double digits in the last 48 hours. Yet, did the ecosystem really suffer a setback? Are we seeing less value on the Hive blockchain as compared to before?

Here is where building enters the picture. 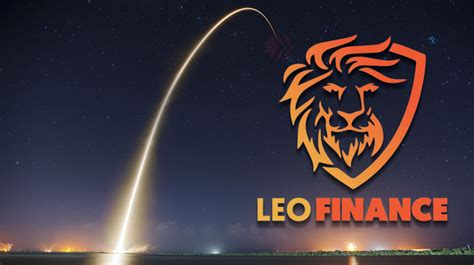 LeoFinance As A Priority

Since it started, I was a big believer in the future vision of Leofinance. The idea of "Seeking Alpha on the blockchain" was a great idea. By combining the Hivemind of people interested in finance, investing, and cryptocurrency with tokenization, we can see the potential for a powerful ecosystem.

This was accomplished to a small degree. The concept proved worthwhile although the site is nowhere near the size (and reach) of Seeking Alpha.

Fortunately, a lot changed over the last couple years. The focus was expanded into other areas which now are making a difference. The latest is the announcement that ProjectBlank is LeoFinance. Microblogging is something we talked about for a number of years. It is starting to shape up.

The prospects that exist with this application is amazing. We know how much activity there is on Twitter. Each day,hundreds of millions of Tweets are sent out. If we can bring even a small smount of those to Hive, we could see a radical increase in all aspects.

There is a legimate case that can be made that this will be a powerful feeder system into Hive. The integration with other applications and the ecosystem as a whole adds more value.

For those who understand how the upcoming LeoAd feature ties into all of this, the point becomes clear: the potential to drive value to LEO is even greater.

It is why Leofinance should be a priority on Hive. We are seeing the spreading of the tentacles further out. The additional layers are adding a great deal to the potential value for this platform.

The opportunity exists for all applications to leverage the decentralized database. We all can build different things at the base layer which can be incorporated into the different platforms.

The acceleration in the development of Leofinance is only going to enhance Hive. The reverse also is true. For example, the last hard fork saw the introduction of the Resrouce Crerdit delegation. This helps every application on Hive. No longer do they have to delegate hive power to enable users to interact with the blockchain.

When it comes to cryptocurrency, use case is a rarity. This is something that Hive has by orders of magnitude over most things out there.

Each layer that makes progress can be a boon for all else that is tied to it. We can see how the ability to leverage each new development integrates with the whole.

Leofinance is very agressive in their development plan. This means we are going to see a great many upgrades over the next 12 months. It is too easy to fall into short term thinking regarding how things evolve.

In reality, we are still in the early stages of these entire industry. Leofinance is based upon a road map that is continuing to expand.

The same is true for Hive. If we keep that in mind, we see how important this is to our overall path forward.

I think Leo is part of the reason that my friend was finally ready to jump into Hive and get an account created. He was interested in the investing aspects more than the blogging side of things. He has a little bit of Leo generated now thanks to the investments I made for him. It should continue to grow each week from now on.

It does open up a wider range to people.

By the time all the applications that are tied to hive boom, this will take hive to another level entirely. Now is the time to build

The tree has roots and this roots spread out firmly and strongly to form a strong base for it to sprout up and have branches... these branches also grow to form smaller ones that bring out leafs and also yield fruit... everything is in ítself the embodiment of that tree...Hive is growing and with a strong root like Leofinance, there's going to be more beautiful days for the whole ecosystem...I can't wait!

Very true of Leofinance. I am doing a slow stack of Leo token. But it seems harder to grow in the community or get visible because of many users there.

Try threads. Sometimes it gets quiet in there, helps with visibility.

So happy to be a part of this community! Was one of the best decisions I took in 2021. 🔥

I made a post about this too . Why isn't @leo.voter delegating RC instead of HP to newly created accounts?

I presume they havent approached it yet.

I think Leo is a great community on Hive because finances are one of the best reasons to hold crypto. The development continues and I think the pHBD and bHBD pools are great additions to Hive. Outside of the centralized exchanges, we have a way to get in and out of the system.

Now that the bear market is in place, the HIVE token has lost value, but the blockchain has not lost value. I will do everything possible in the next few days to increase my position of both HIVE and LEO tokens. As you wrote, I also believe that LeoFinance is an excellent platform, in my opinion the best social platform based on blockchain with the theme of finance

thanks for this feedback, it's nice to know there are new people interested in Leo Finance

Leo power is easily becoming the most valuable asset on Hive besides $Hive. When ad revenue money starts rolling in people will start to notice. No project has a rev-share model as good as this one.

From the start leofinance makes it easy to access hive , starting fron the start of registration,to every content Leo stand for and also with numerous development they keep adding,this generate alot to hive community at large

One of the keys to the future of Hive is going to be the applications that we build tied to the blockhcain. Whether it is gaming or communities, it is important to keep this in perspective.

Absolutely agree! With Splinterlands being the success that it is, I really feel that the door is wide open and that there's opportunity for more businesses to develop games and communities here on HIVE.