@taskmaster4450le 78
about 2 months ago
LeoFinance

The other day we announced that Leomarkettalk liquidity pooljoined the pHBD-USDC. One of the keys is for Leomarkettalk to be a full time liquidity provider. Since this is account is one for the Leofinance community, supporting the efforts with HBD is worthwhile.

Here is what we wrote at the time:

The main idea is for @leomarkettalk to be a permanent provider to the pHBD liquidity pool. What goes in does not come out. It is liquidity that will keep growing as payouts come.

Ultimately, we are doing our part to get the amount in the liquidity pool up. This is a slow process but knowing that each HBD in there helps is important. After the events of the past week with UST, it is vital that Hive do what is necessary to build a strong stablecoin using solid techniques.

Leomarkettalk feels that the liquidity pool on Polygon is an important step. We also look forward to the opening up of the one on BSC which will create even more arbitrage opportunities.

Here is what we are looking at right now with the pool according to a Tweet put out by the Leofinance account. 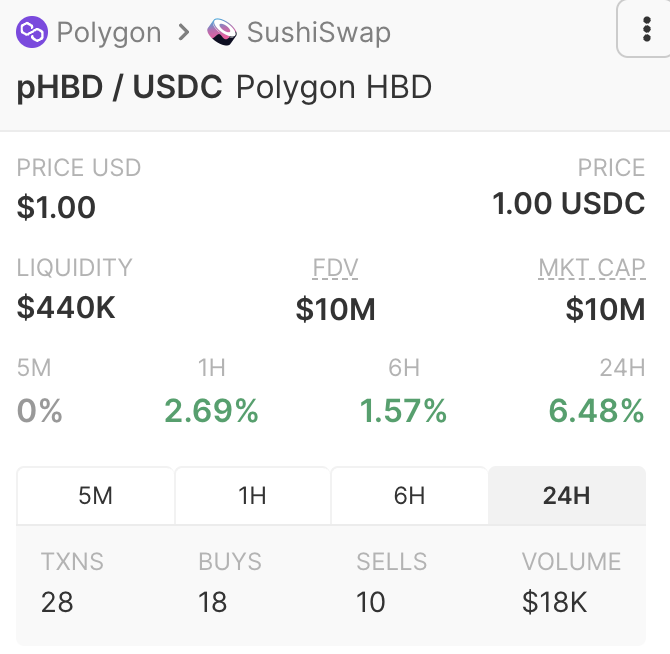 According to the Sushiswap contract, there is $440K in liquidity.

To start, the power down that was started a few weeks ago paid out twice. The HIVE was swapped on the Internal Exchange for HBD. Here is the transaction.

This was added to the HBD in the account and swapped for pHBD.

Before we added to the pool, this is what it looked like:

Here is what it looks like after the transaction was completed.

As noted, the plan is to leave this in the liquidity pool forever. It goes in and does not come out. This is supporting the HBD project and we are doing what we can by providing liquidity.

Since we had staked some in the liquidity pool earlier, there were some POLYCUB earned. This was harvested but not claims. We are going to incur any penalties. Instead, we will just wait the 30 days and take our payout.

Here is what we earned so far.

Once we can claim the POLYCUB, that will be swapped equally for pHBD and USDC. Both will be added to the liquidity pool.

Hopefully the price of POLYCUB appreciates over the next month, in USD terms, so that we can get more for the 98 POLYCUB.

What You Can Do To Help

All of the HBD and HP rewards from Leomarkettalk posts are all being fed into the liquidity pool. Therefore, the community can help by supporting this account.

To start, drop by the post each day and engage. This is a great way to get to know some of the other Lions.

At the same time, give each post an upvote. As stated, this is going into the liquidity pool, a move that can only help Hive in general.

Leofinance is intent on helping to move Hive forward. This is something that @leomarkettalk supports. To achieve this end, we need the support of the community.

Together we can help this along.

This is a really great step. I would be happy to help the liquidity pool by supporting @leomarkettalk.

Anything that comes into the @leomarkettalk account via HP or HBD ends up in that pool.

All POLYCUB earned will be swapped for pHBD and USDC and added.

The money will go in and not come out.

Not bad at all even with the huge down turn in the markets this will add up over time!

Yep. Consistently keep it growing with whatever comes into the @leomarkettalk account. All HP and HBD will find its way there.

Great stuff. I didn't know this was happening. Its nice to know that this account is going to have our backs when we go into the farm.

It is doing what it can to help out. Might not be a lot but whatever the community feeds to the Leomarkettalk account via upvotes will end up in the LP.

Sounds really great and as always I appreciate this leomarkettalk initiative.

Seeing what has recently happened with TerraUST, it is necessary for #Hive to take measures so that this does not happen with #HBD. It's good to know that we can all work together to have a very strong blockchain.

There are a number of measures in place that deter a similar situation from happening with Hive.

This is why #Hive is one of the strongest families in the crypto space.

Thats a pretty good idea rather than having someone profit utilising the income to support the network. I like it! I'll have to throw a few more upvotes the way of market talk.

I must have missed the initial announcement and was wondering why the thread was getting a lot of upvotes.

I must have missed the initial announcement and was wondering why the thread was getting a lot of upvotes.

Now you see. All HP and HBD is going to end up in the LP.

We will also do something with the LEO that comes in. Havent really thought about that yet but we will so some kind of contest to get the LP being used.

I think using it to add more liquidity is a great use case for HBD. I still prefer the HBD in savings because it's safer though.

We need more liquidity and the Polycub pool is really the only way to do that right now.

@steemstreems 59
about 1 month ago (Edited)

I had an idea similar to this earlier. Create an account and an initiative for that account -- reward anyone who contributes to the pHBD-USDC pool with votes. Of course I am not facile enough to actually accomplish that in a meaningful period of time so....

This is an awesome (an in my mind) actually better solution. It is an already existing Leofinance "community". A captive audience so to speak with a group of people that probably already have for a penchant for supporting this very thing.

One thing that might really help besides people voting would be To get as many lions as possible to delegate HIVE to this account. This would enable the account to make more HIVE (thus ultimately more HBD to wrap to pool).

I know this is kind of circle-jerky, but its for a good cause :-)

Of course, this would be purely altruistic on a delegators' part unless the account offered some kind of benefit for delegation. That I would leave up to leomarkettalk to decide. It would be nice, but I think some would delegate just for the cause and whatever benefits they got inherently from account participation.

I will put my money where my mouth is (even though I don't have very much HIVE). After all, a delegation is not permanent, and can be removed when needed. Every little bit helps :-)

Plus this is a way to help today, right now, even though all of my HIVE is locked in HP

Maybe make a call to action on your personal account, on leomarkettalk, to @khaleelkazi ;-) and other HIVE/LEO whales.

The account doesnt do any voting so it isnt feabile.

But perhaps some of the payouts for delegation to leo.voter could be used for there.

There are a number of ways we can raise money to feed into these pools.

@steemstreems 59
about 1 month ago (Edited)

Ha! Does that mean I should take back my delegation?? :-)

Any reason why the account couldn't do some voting to all of the delegators through a bot or something?

A vote really doesn't matter that much to me personally, but it could be an incentive to get more HP into leomarkettalk and thus more HIVE for movement into pHBD ;-)

Great way for the community to add to the pool without having to do it themselves.

Awesome how the Leomarkettalk revenue will be helping to strengthen liquidity on PolyCUB. This is a real powerful utility that will be beneficial to everyone in the LeoFinance ecosystem.