Tesla Making It Game Over For The Legacy Automakers?

@taskmaster4450le 77
about 2 months ago
LeoFinance

The other day, I put together an article that discussed how Tesla Is Going To Force The Government To Bail Out The Auto Industry. This is simply a view that Tesla is going to eclipse the legacy automakers by such a wide margin that they will simply not be able to complete. Of course, politicians being the way they are will be conned into providing large sums of money to these companies to keep them afloat. After all, the jobs are what matters since people vote.

People simply think that the traditional automakers are going to flip a switch and start mass producing electric vehicles (EVs). This belief is what causes people to throw out the "competition" argument when discussing this situation. The challenge with this is that it is something that was bantered about for the past 5 years. Yet, somehow, it never really arrives.

One of the co-founders of Tesla was quoted as saying the OEMs “They haven’t really done the math fully”.

“So many different OEMs, countries, factories, customers are leaping into EVs. You know, making these huge announcements, you know, saying that they’ll be fully electric this decade or the next. They haven’t, I don’t think they’ve done the math fully. What that entails on the supply chain and tracing it all the way back, literally all the way back to the mines. You need to do that, or else, you know, you haven’t really solved it. It has the feeling to me of kind of like a giant overbooked flight.

“All these people like, ‘Oh, this is great. We’re all gonna go to that new place. We all wanna go there. It looks great. Sweet. Let’s all go on the plane and go.’ So everybody’s saying that we all wanna go there at the same time. Meanwhile, we have to sort of build the planes to get there; we have to figure out how to sequence everyone. The figurative runway is like the time to do all this, and it could all get sorted out over time. But obviously, we’re trying to do this fast as a society and as a species,” Straubel said

Scaling While Others Are Flailing

Many of Tesla's competitors keep talking about what they are going to build. Telsa, on the other hand, simply keeps building. As noted in the other article, we see where Elon believes Tesla's advantage will reside: 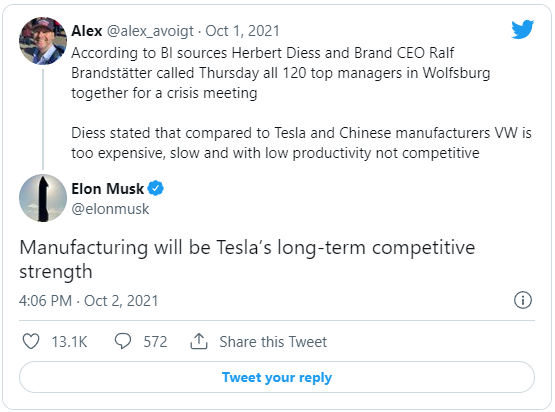 This is a point that is getting harder to argue. It is best to keep in mind that the Model Y just started production in the Chinese facility this year. That means much of the year was spent scaling. This is vital to production and something, quite frankly, no EV maker has really be able to do thus far.

In about the 9th month of production, this is what we see out of Shanghai. 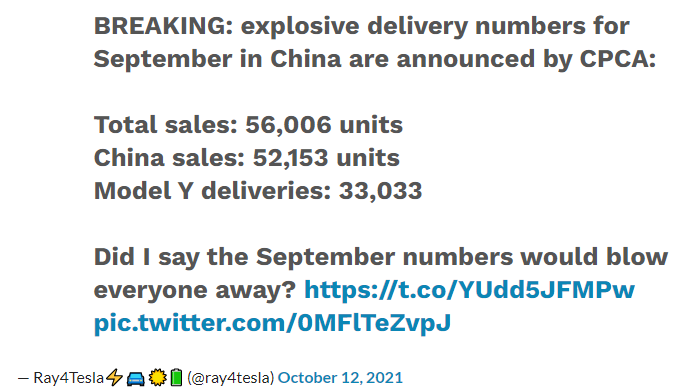 That is a stunning figure considering there were zero Model Y production to start the year. What is even more encouraging, if the scaling rate is the same for their next two plants coming online, that means by July 2022, we should production of around 65K in those two locations in one month. Couple this with the scaling of China along with some addition out of Fremont and we can see how the numbers start to get rather large.

It is best to mention that General Motors is hoping to produce 1 million EVs in a year by 2026. This will be done by investing $35 billion into their EV program.

Ford, by the same token, has modest aspirations. It is no secret that the F-Series pick up trucks is Ford's bread and butter. The company got a lot of attention for the F-150 Lightning, their first electric pick up slated to go into production next year.

Where did they set their sites?

Not exactly encouraging considering this is their flagship product. However, they do have the Mustang Mach-E that is already being sold.

Production of the Ford Mustang Mach-E for the global markets decreased last month to 5,353, but overall, it remains relatively strong and stable.

That is relatively encouraging although their yearly production is not even to what Tesla did in one month out of Shanghai. Of course, that is produced, how were their sales?

Unfortunately, sales of the all-electric Ford Mustang Mach-E amounted to 1,448 units (1.2% of Ford's total result), which is the lowest level since its market launch. That's a bit surprising as the production volume remains strong (more on that below).

Sales down but at least production remained strong? Not exactly a recipe for success. Of course, this is one month and may (or may not) be indicative of a larger trend. Nevertheless, the total numbers for the year are nothing stunning.

With the present run rate out of China along with the Model X added into the Fremont numbers, we see an annual production of close to 1.2 million vehicles. This is before a single one rolls out of either Berlin or Austin. Naturally, the key is going to be how rapidly they can scale production in those two location.

It is likely that Tesla will produce more than 2 million EVs in 2022. This is double what GM plans on producing 4 years later. Also, the Crybertruck will be released in late 2022 with production going the following year. This means that Tesla will likely have producing over 500K in 2024, the year that Ford hopes to have 80K.

The situation is looking very grim using the legacy automakers own projections. By the middle of this decade, it is possible that Tesla is pushing out 5M-6M EVs in a year, gobbling up market share from the other automakers.

This is starting to resemble the smartphone versus Nokia scenario all over again.

Personally, I think Elon Musk is a scam. So is Tesla. The EV thing is also a government forced scam. Gas and diesel are far superior for autos than electricity.

Have you ever been in a Tesla?

I have not. I have heard it's like driving an iPhone, very nice. However, normal people can't afford one. Even with MASSIVE government subsidies. If they roll out a Tesla that an average American could realistically buy (without subsidies) I might change my mind.

What aspects of fossil fuel would you say are superior compared to electricity?

Oh man! Where to start. First, electricity is largely provided by fossil fuels also, mostly coal. So you're just getting a bunch of inefficiencies with power transformation and transportation (electric lines burn a lot of electricity in transport.) But you might say, "Muh green energy!" Green energy has been a big flop so far. They keep saying solar and wind will really come through in a few years, but they've been saying that since the 1970's and it ain't happened yet. Look at the Texas freeze of 2021 for proof. This, despite MASSIVE amounts of tax dollars and regulations made to support the renewable industry to the detriment of other forms of energy, and they STILL can't cut it. Then, just the practical matter of I live in Siberia. Not really, I live in Wyoming, but same thing. I've been stuck in a remote ditch more than once in my life during blizzards. In a fossil fuel car with a full tank I can survive days out there. Batteries don't do well in the cold. I imagine people stuck in a blizzardy ditch in northern climates in a battery powered car will freeze to death in hours.

I am wondering whether or not the Cyber Truck will deal a blow to Ford or not. Then again wen Cyber Truck? I feel like nobody is saying anything since Elon doesn't have any ideas when it will be ready.

I am not sure it will be a deathblow to Ford since I doubt it will totally take over the market. It is a specialty truck which can account for maybe 20% of the market. There are going to be many who simply do not like the looks.

When? It is pushed back to 2022 (end) with production ramp in 2023. The battery constraint means they focus elsewhere.

For TESLA , I'm yet to know more about it. While I don't put interest on it because, I'm seeing the owner as a business Man that's Elon musk. I don't trade it so that he will not talk any negative thing that will affect my coins.

They are too far ahead at this point. They may not eat up 100% of the market but they will have a fair share of it and all the others will have to fight over whatever is left

No they wont eat up the entire market but they will do well overall.

We are not far from a time when Tesla will be churning out millions of vehicles a year. It is best to keep in mind that two years passes quickly.