This Will Happen In The Next 30 days

Have you seen these headlines? They seem very common on YouTube with people making videos espousing the end is near. Depending upon the subject matter, this is something that I heard about for the last 30 years.

Someone is always pushing the doom and gloom. No matter what the economy is, we have people who want to tell us how bad things are. The reality is these people usually are wrong.

There is a lesson in all this. Not only is it vital to do our own research but also to identify the morons and idiots. There are a lot of them out there.

How do we separate them? Simply look at their track record for one. Another is to look at whether they espouse an ideology.

Couple these two together and we see how wrong things are.

For all of my life following markets, the gold bugs reigned supreme as doomsdayers who were wrong. This has persisted for 30 years. That is a long time to be wrong.

Here is a headline from the King Charlatan himself.

That was more than 13 years ago. How did the prediction turn out?

Here is the DXY with September 2009 highlighted by the cursor. 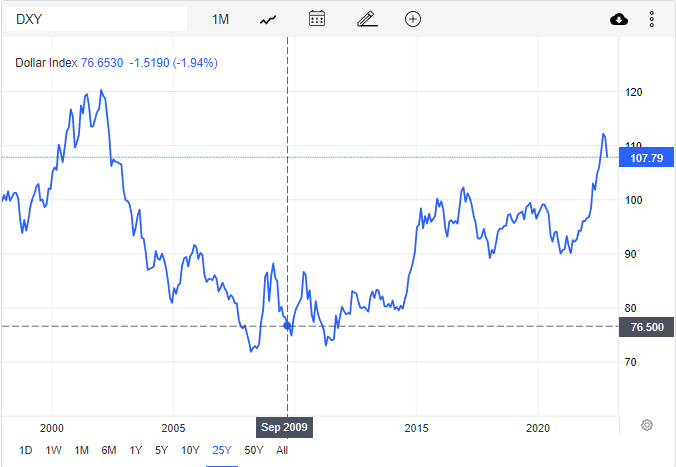 It seems like Peter was near spot on....for calling the bottom. Since that time, the USD has rallied, registering 50% hither today than at that time. Unless doomed means something that I am unaware of, this seems not to be the case.

Hwo about the stock market? Schiff said they were doomed. 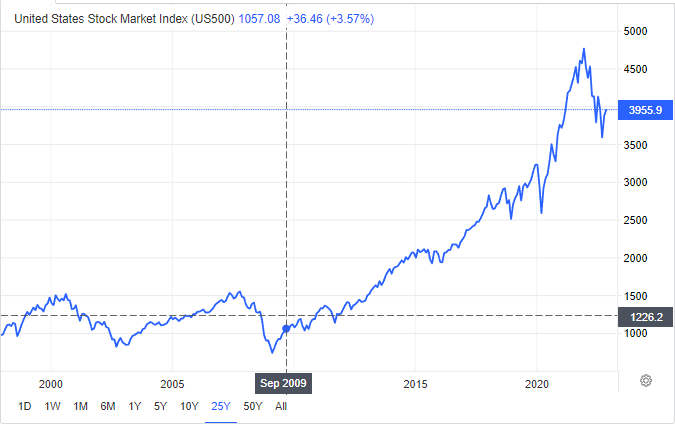 Another nice one Peter.

How about gold? Without looking at a chart, we know that price was never approached. In fact, gold didn't even get halfway there.

So how did it perform?

To Peter's credit, gold is now 75% higher today than in Sept 2009. The return was decent over that time, outpacing the dollar. However, it lags far behind returns in the stock market.

These People Will Cost You Money

It doesn't matter what the focus, the doom and gloom people cost investors money. Their input is useless.

The reason this is the case is because markets and economies rarely crash. While Peter Schiff spends 100% of his time calling for the demise of everything but gold, he is wrong 99% of the time. There will be a couple times when things get bad and he is proven correct. This is what they lead in usually is on CNBC.

"Peter Schiff, the man who called the crash in 2008." (or the man who hasn't been right since)

The reality is that markets spend most of their time in the bull. We know bear markets are very painful and pullbacks can wreck one's account. Nevertheless, as we can see from the S&P chart, the overall, long-term trend is up.

We see the same thing with Bitcoin.

Things are ugly right now. There is no way to sugarcoat it. However, if we look at the long term trend, we notice something very interesting. 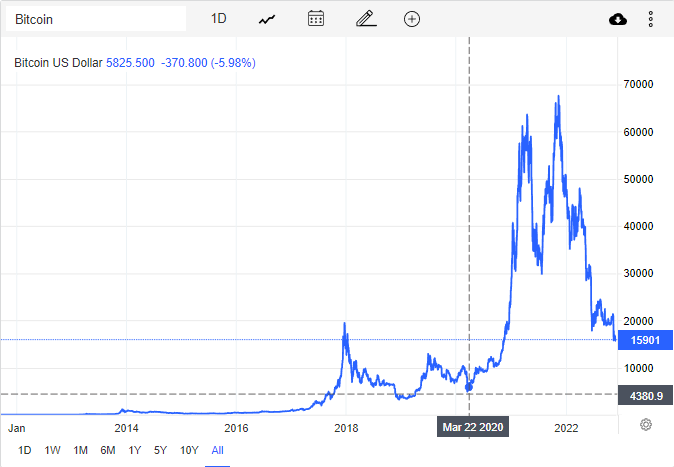 Bitcoin is more than 3 times where it was in March of 2022. This is a more than 300% return in about 30 months. Granted, there was a trip to $66K in the meantime but we can see how the long term trend is working.

If Bitcoin went from $4,300 and slowly worked its way up to $16K, do you think most people would be screaming about the end of Bitcoin? Sure there are the usual suspects spreading the FUD. But the idea that Bitcoin will crash in 30 days would not be the headline of so many YouTube videos.

The calls by the Bitcoin Maxis of $500K BTC when we were at $66K turned out to be absurd. So, too, are we going to see the calls for BTC at $1,000 (or zero). We know that at some point, the bear ends and the bull starts running.

Just look at these moves:

Each time there was a major pullback, we were warned the end is near. It never happened.

Therefore, it is suggested that you ignore all those articles and videos titles "This Will Happen In The Next 30 Days", this one being the exception of course.

In the end, markets go up and they go down. However, the long term tendency is for most things to increase over time.

I'm not familiar with the dxy but couldn't the increase in stock and gold prices be attributed to overall inflation? We will see bull markets in times of easy and cheap credit, when everything is inflating in price.

Over the millennia gold has proven to be very good at preserving purchasing power. It is very resilient, keeping (physical) gold means having roughly the same wealth on both sides of even the worst of crises. But that comes with assumption - you need to still have your gold when the civilization resumes its existence. During total collapse having skills, friends and family, food, pharmaceuticals and/or bullets is way better (and during lesser crisis cash is probably best, so you can buy on fire sales). So, betting everything on gold is betting on total collapse and yet not total enough for recovery to be impossible or too slow. In that sense Peter Schiff is aiming at very narrow window of opportunity for his predictions to bear fruit. Hardcore preppers make more sense.

What gold has also proven is that it does not generally increase its purchasing power (outside general technological advancements - sure cars of today are better than same priced gold-wise chariots of old, but that's not because gold is more precious now).

As part of portfolio gold is pretty solid choice as savings. But there is also need of investment (something that gives interest/dividend) and speculation (things bought to be sold after they increase in value) and gold has no place in that area. For very risk averse people, that want only to save, gold might still be the answer.

Peter Schiff is a moron. He’s been saying this for decade now. Anyone that listens to him should just drink the Kool-aid already

A broken clock is right twice a day.

Peter will be right again at some point 😉

That's true friend, taking Bitcoin as a case study, it drastically dump in price this year from $72,000 to $16,000. I currently don't think it may rise up again to the ATH.

Thanks for sharing, I literally though when you were referring to the end, it's like the end of the world.

The doom and gloomers will always be there but I do think it's likely for the entire market to go down though. They should be dragged down by the tech companies not doing so well. Now that options expiration is over, I can see us going down after seeing the greed in the market.

Not gonna lie, the title got me since you never write those lol