The #leofinance team recently tweeted to find out which #BSC #defi platforms are our favorites. 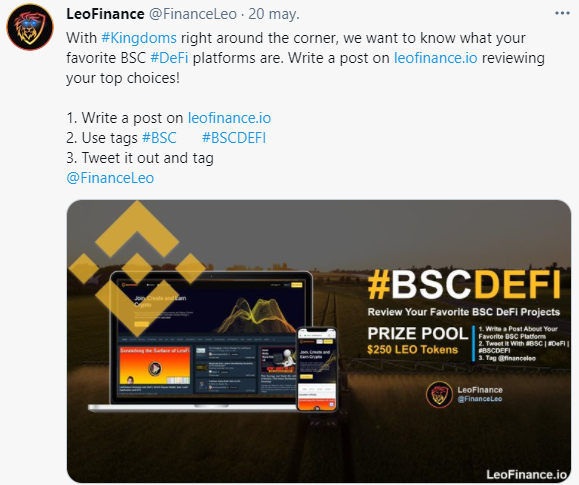 Banana: this is Apeswap's native currency that is also environmentally responsible, it is based on tokens that represent 1 kilo of bananas from a sustainable cultivation and for export purposes located in the Republic of Laos, although its price has been suffering along with all the rest for me has a good future ahead. SHIB or SHIBA INU It's a decentralized spontaneous community building experiment that can stay under a penny on the ethereum network. I could say it's a knockoff of a meme coin, but I consider it one of my favorites as I expect a lot of profit next year , maybe I could move on to DOGE, I don't lose hope. SafeMoon is a decentralized finance token that has three functions to perform during each exchange: Reflection, LP Acquisition and Burning which debuted in March of this year, so far 2 million people have bought the token, although there is not enough information about it or how it can be used.Its creators want to fix some of the problems, such as price volatility, that are common in other digital currencies.

Kingdoms lately is the next most important step for CUBfinance, which would be to get some of the BSC platforms to create a space within their platform and support our token, in order to raise more capital to support further development of the platform. This smart contract feature that plans to place CUB of the most popular DeFi will make automatic compound vaults, from which we will get an underlying CUB asset.

It seems that it is only a matter of time until all the sectors have their own values and tokens. An example is the Banana.

Talking about Doge, even though it was trending because of the tweets of influential people, and now it looks like people are starting to be disappointed with some of his statements that have greatly affected the price of Doge, IMO, HOLD is something to do for now.

Thanks for sharing your opinion. I would like to learn more about CUB FINANCE in the coming months. DeFi platforms will become more and more known and used.

This smart contract feature that plans to place CUB of the most popular DeFi will make automatic compound vaults, from which we will get an underlying CUB asset.

I don't get this part.

What exchange can Safemoon be traded on? It's been trending on Twitter and a FOMO might be getting to me

It is on the Binance Smart Chain (BSC). If you wish to get some you can purchase it with BNB right from an Ethereum Wallet if you have the Ethereum wallet set up for the BSC.

I don't trust Safemoon. It has rug pull vibes

it may be but if you make a small investment to see how it acts, to see if it is worth you can get profits or not

I found apeswap interesting, and a project that promotes agriculture together with defi deserves to have more recognition.

Interesting recommendations. although it seemed that SHIB would take off I think it is not going to happen, and many people already lost money with it, I trust more in DOGE. I like Banano but I'm just starting on this platform. I don't like the others. I think I will make my post with my favorites. Greetings.

Congratulations @tcpaikano! You have completed the following achievement on the Hive blockchain and have been rewarded with new badge(s) :