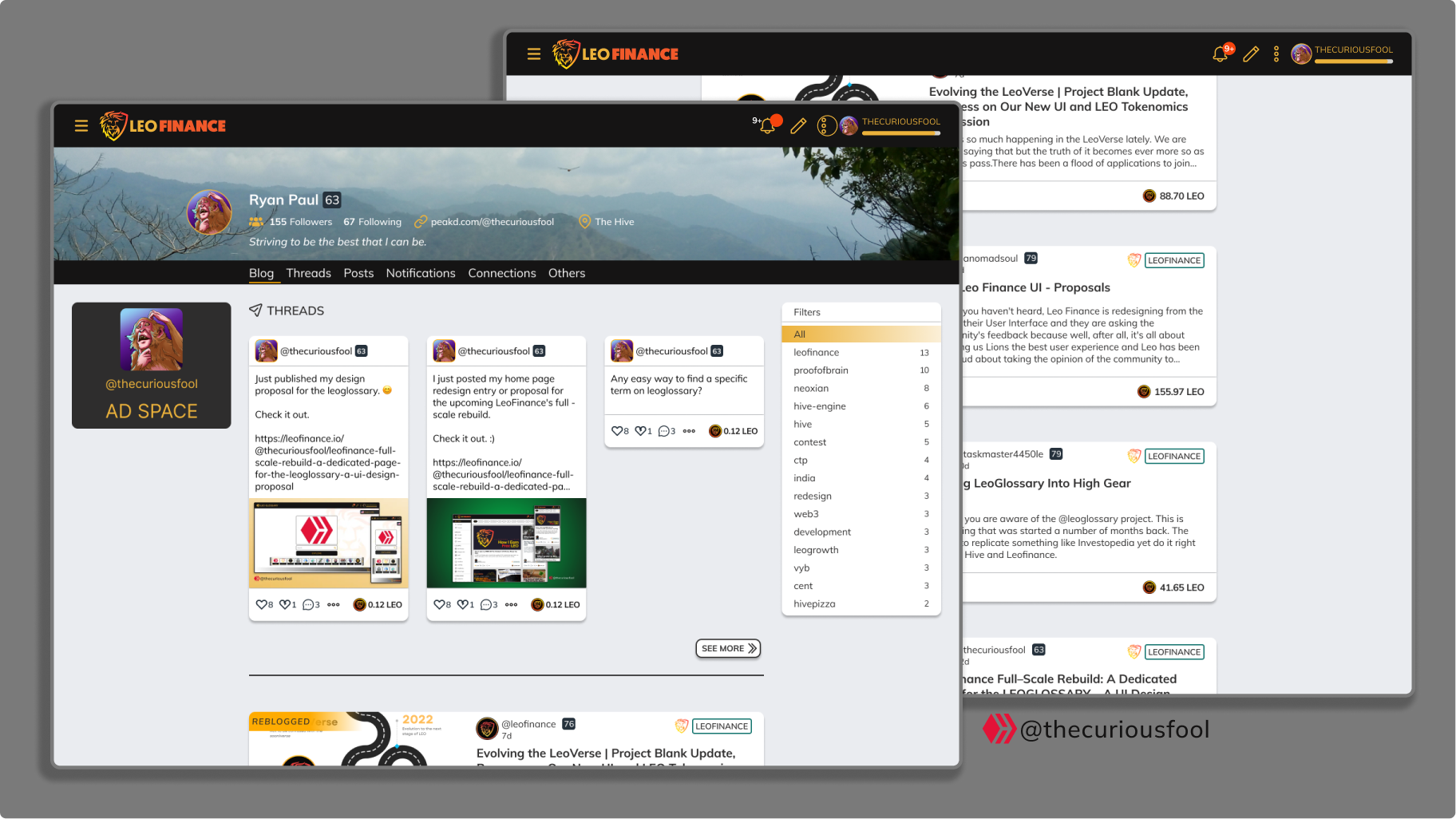 It’s the 15th of November and it’s Leo Power Up day! And who said we are just limited by just powering up our LEO token?

For this month’s LPUD, I did not just power up my LEO tokens but I find it also the perfect time to present my final list of UI design proposals for the LeoFinance full-scale rebuild.

I cannot yet slay a dragon but I can design a sturdy castle (my design proposals) that could deter any dragon from attacking the lion’s den. 🙂

For my final list of suggestions, I would be covering the post creation page and the user profile page.

There are certain features of the post creation page on LeoFinance that I love and there are a few that I would also like to be improved.

First, the profile menu tabs would look better if we left-align it with the profile name and post list.

From what I can see, it is currently centered which requires a light load of brain power and eye work. There is a considerable distance between the other left-aligned content/text. This doesn’t matter much if the viewer is not focused but it does affect the concentration of the reader if they concentrated (e.g. reading).

However, if we want to effectively deliver content to the reader then these kinds of little distractions are better minimized.

As it is, there is little that I would like to suggest for the blog tab other than a few things like more spacing, alignment, and a few cosmetic adjustments.

Currently, there are a few things that needed major improvement under this tab. Though, it is understandable as it is a new feature/app just recently added.

I personally don’t like tabs under tabs. It doesn’t look good and they fight for the attention of the viewer (because they look very similar).

I would love to add more but I'm a bit short on time.

Thank you for reading my content and hope you appreciate it. 😉

More power and have a great day ahead.

The design was made on Figma.
Icons are from the Figma Community.
Screenshots are taken from the LeoFinance frontend.

i love your work, it is nice and a update that leo really needs

Thank you for visiting and appreciating my work. 😊

Great stuff mate, as always you did awesome work and shared some really great suggestions. Keep up the good job.
!PIZZA

Basically, the thread tab has to be incoperated into each users profile rather than it being completely alienated. This would actually show more responsiveness and willingness for people to thread before they even click on the thread tab. Amazing changes, I'm hoping you get to win some prize for this.

Sometimes, some visitors would just look at the first thing that they would see and might not even click on the other tabs (e.g. threads). Placing some of the users threads in front can break this barrier.

Thank you for visiting and for appreciating my work. I would be very happy if some of these proposals of mine would be implemented. 😊

Yeah, I think not having that thread feel might make people completely ignore the fact that there's is an important aspect of the Leoverse that's called thread. So we literally need to put it on their faces.

Yup and we have to make it attractive enough for them to make them click it.

Totally agree . It has to be so simple to use that it becomes addictive.

Exactly, sometimes I forget there's a thread tab, it's not exactly screaming to me if I have to search for it.

Having an attractive UI is one of the most important feature for any platform growth and everything looks great here .

Agree with that as most people (specially visitors) tend to judge the quality/capability of an item (community) based on how it looks (UI).

Thank you for visiting and for leaving an encouraging comment. 😊

Great ideas! I really like the library(LeoGlossary) item and the tags proposal. Since I started on Hive with PeakD I had also a hard time finding that tag button. And even still it kinda feels like it's not in the right place!

I think that it would be cleaner to group the threads that are connected to each other. This way, the viewer knows what replies belong to which thread/reply.

Two thumbs up also for this suggestion.

Agree with you with that and nothing is more perfect to voice out our suggestions other than this "redesign" opportunity.
Let's hope that they will implement them (I have a positive feeling about it). 😊

Thanks a bunch for the appreciation. 😊

@libertycrypto27, the HiQ Smart Bot has recognized your request (2/2) and will start the voting trail.

This man . It is utmost necessary . Right now it is so confusing.

Yup. This is one of the things that should be fix as early as the wireframing stage - before deciding on the colors and graphics.