Just minted myself some Apes in Space

@themarkymark 80
about 2 months ago (Edited)
LeoFinance 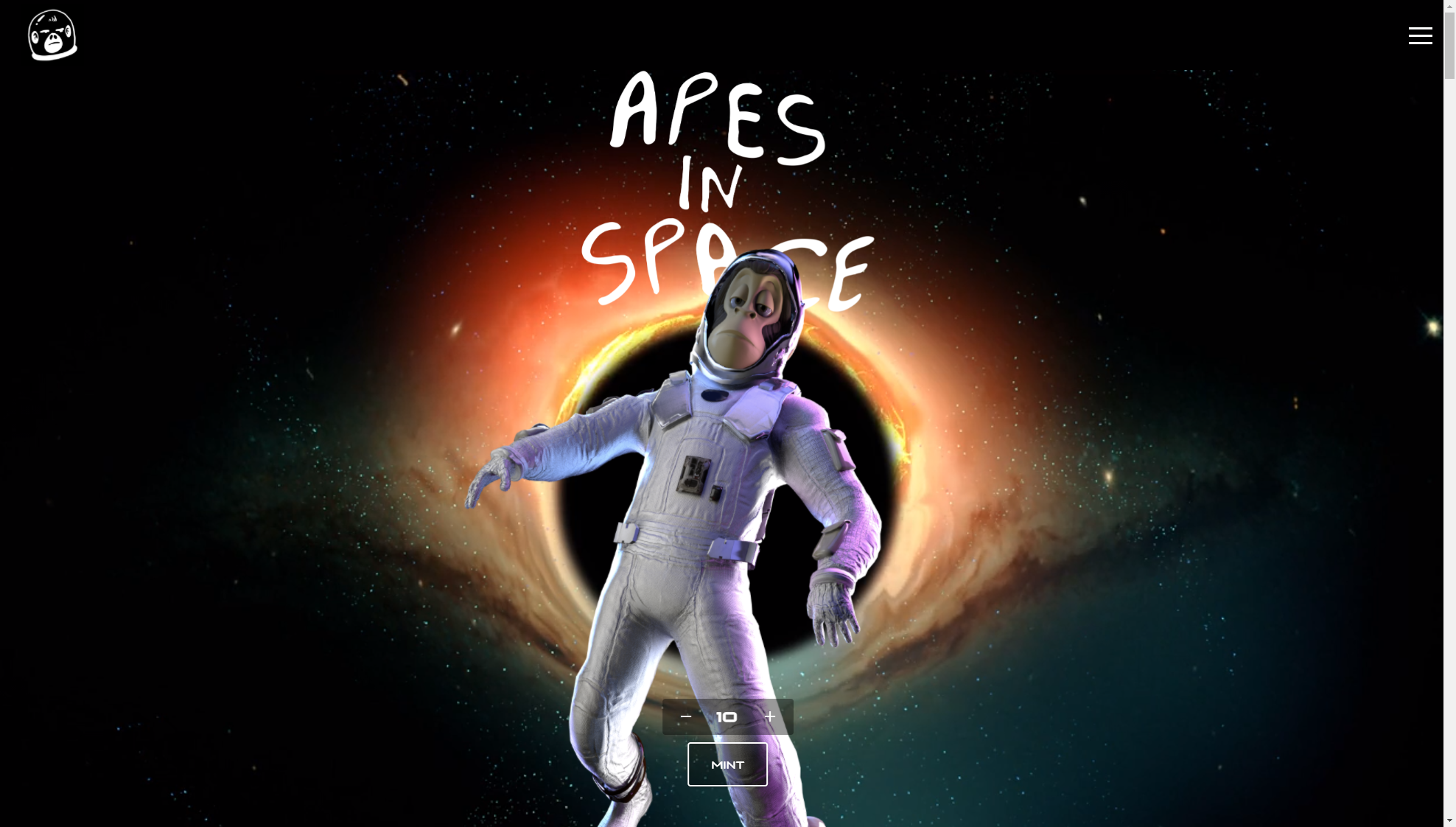 UPDATE: I was hanging out in their Discord and jumped on their live AMA. I'm already having buyers remorse, the dude behind it seems like an idiot. All the people who went up for a question were just patting him on the back and they were all preparing for the moon. I also noticed after I went to bed, the amount sold only went up a small amount.

I've been watching this new Apes In Space project take off. 50% of them sold out in the first hour.
I don't typically buy into these, but there is a lot of hype for it right now and suspect I can roll the dice with it.

I picked up three out of the possible 10 per wallet.

Cost me just under 1 ETH, but I won't know what I actually got for about 48 hours when they release the assets.

You can follow the minting by checking out the OpenSea page here:
https://opensea.io/collection/apes-in-space-nft 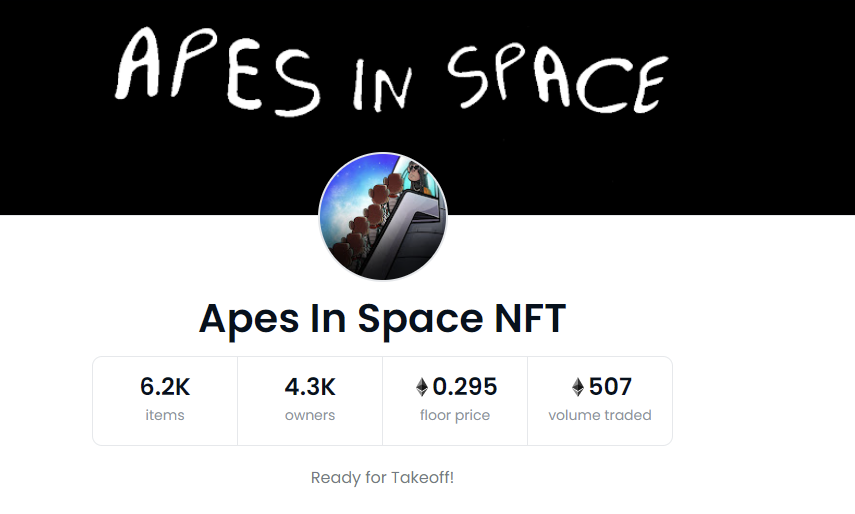 As you can see about 6.2K are minted.

After the first hour, the minting has slowed down a lot.

The team is giving away $100K to one of the 10K NFTs. Funny thing, the winner has already been announced and it was a secondary market user. In other words, the winner sold his NFT for a 0.009 ETH profit losing out on the $100K prize. Someone is going to be salty af!

I have no idea if this will pay off, but figured I'll give it a try. The buzz is insane, but that's not always a good thing. Currently their discord has 118K people and growing fast.

This is not financial advice, and just my experience. I have no clue if I made a good investment or not.

Wow this is really surprising to know and the amount of people involved.

Buzz is good to some extent.

I remember when we minted our punks the most exciting thing was the waiting time to see what you got. I was lucky as both my punks are pretty cool and the rarity index is close to 300 for both, so no regrets on my behalf.

I hope you're going to show us what you've got 😃

I have no idea if this will pay off, but figured I'll give it a try.

We gotta be willing to try!

Everyone who is new to nfts needs to take heed.

These discord servers with tens of thousands to hundred thousand plus are mostly fake accounts inflating the numbers. It costs about 2 cents per fake discord user.

People sell services to help inflate your discord so it looks like a huge project. This attracts real people

Typically on ethereun there are dozens of nft projects launched per day and almost all of them will lose you 90 percent within the first week.

I say this as someone who has been involved and seen it first hand. Dont spend what you cant afford to lose people!

I'm fairly sure it's mostly legit, it's backed by a celebrity and I'm watching the chat scream.

Although, to be honest, the more I listen to them on the live AMA and watch how much it slowed down, I'm a bit skeptical at this point but will likely at least break even.

Could be a moon shot.

From all the NFTs i've been in and out of, been scammed by Dan Folger who is a big time millionaire crypto influencer. He hyped up the project, had a roadmap, they never did anything past the minting and it was just left to die. :(

Ape Dao Remix! they have a huge DAO with a collection of 80 Bored Apes + other super expensive NFTs, with tons of utility, free mints on new apes, etc. Those went from a floor of over 1 ETH down to .05 ETH. I'm finding that a super majority of all NFTs crash and burn and if you don't sell what you got within 24 to 48 hours after reveal you're toast. That's my and my friend exp

My friend bought into Habbo Hotel(huge brand name awareness, actual game thats been out for what 15+ years) and those were about .9 ETH pre reveal and post reveal dropped down to around .15 now.

Even with something having tons of legitness and utility, I've been super burned and so has my friend.

The Hive Punks are great for a totally different reason, punks are cool no matter what platform it's on.

Anytime I see people talking about NFTs I'm like oh cool maybe I should throw a few tokens that way and give it a try. And then their like "starting price is $4000+ dollars"
and I'm like 😐 😐 😐 Jesus!
Lol
I can't believe how much they go for.

But if you're selective in the projects you invest in and if you see value in it yourself then I'm sure others do as well so I'm sure you'll do well with it. Good luck!!

@michealb 67
about 2 months ago (Edited)

Well it’s quite a risk, you may never know what it will turn out to be if you didn’t take the risk. Good luck though. I’m taking risks on NFTs but they are very low

Best of luck with that! ETH is still pretty cost prohibitive for me to do much of anything over there. I have some funds I am trying to decide if I should get out now or keep waiting for ETH 2.0 to finally come out and deal with it then. Could be years...

I'm not buying into all these copies of copies. They all try to emulate Crytpo Punks for profit. Some but very very few make it. As an example the Bored Ape Yacht Club, but still to me it is pretty useless and just based on hype ( and profit for the creators ).

@lacking 69
about 2 months ago

I take it these space monkies are not affiliated with our APE token here?

Not at all, some celebrity NFT project.

Damn it, if it was me. I would be freaky gentle and frowning. I feel for the winner, it hurts.

Not feeling so confident after seeing how it is run.

Hi @themarkymark . Big profits will happen here, I'm sure you will celebrate here 😊

They are fully minted, and now waiting 48 hours for a reveal. The floor is a lot higher now and looking a bit better now.