¿WHAT IS STRONGER, BOY, THE GOLDEN AXE OR THE ARM THAT HANDLES?

You know Oh Prince! That between the years that elapsed between the sinking of Atari, and the rise of the Lord of the Rings movies, there was a time not dreamed of when multiple games of sword and witchcraft spread over the earth, like the blue cloak of heaven about the stars: Black Tiger, Rastan/Nastar, Gauntlet, Barbarian, with their beheadings and women of great charm...But none shone as brightly as Golden Ax, the great SEGA arcade.

In 1989, the world of arcades, in full swing and second youth after the pothole of 84, boiled in representatives of the genre «Beat'em up», or «I against the neighborhood», or even more so now, « Brawlers ». And SEGA, a company already enormously successful in arcades, which had also seriously begun its entry into the world of home video games a few years ago, delighted us with what is, without palliation, an immortal classic of action, the game cooperative, and fantasy in video games. 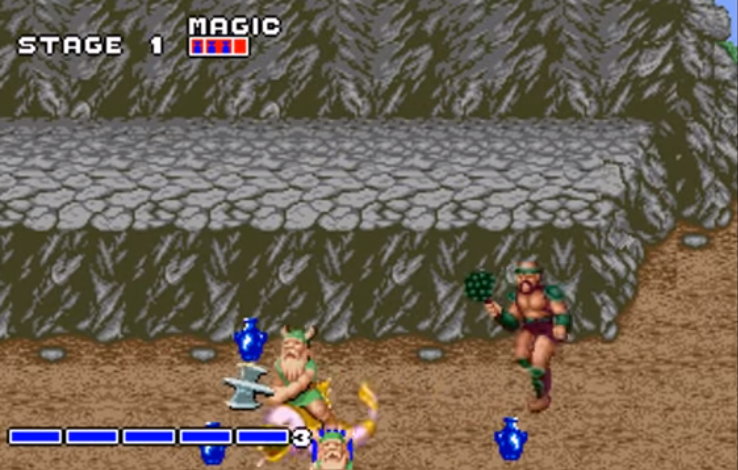 Because, within its genre, and after the starting gun for titles such as Renegade and its semi-sequel, Double Dragon, the urban setting prevailed a lot - the Spanish tagline I mentioned earlier is not accidental -, that in that same year, Konami launched its Crime Fighters and Capcom the also legendary Final Fight. For this reason, the fact that SEGA used a framework that is so different from what is established is only the first great point of this arcade. Fantasy was not something new in arcades and less in videogames globally, where home systems offered even more variety than what was enjoyed in arcades, nor the same sword and videogame witchcraft, with good amounts of titles, from the necessary here , Barbarian, even Shadow of the Beast, another son of 89 by the way. But launching a "milk against everyone" arcade set in this genre was not only a triple from the middle of the field, but the first of many. 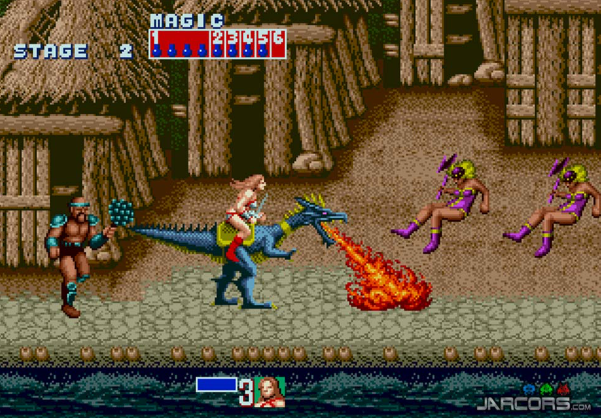 Golden Ax is a delicious combination of fun and immersion, adrenaline and captivity for its enormous visual inspiration. SEGA's System 16 board is fantastic to handle all the action on screen, in those messes of foot enemies, most-noses, and mounts, all at the same time, and show scenes of unusual originality, like that town on the shell of a turtle, fighting on the back of a gigantic eagle that will leave us next to the sumptuous and sinister final palace - although the eagles are not taxis 😉 -, while the enemies we defeated turn to stone and remain on the ground without disappearing. praise that small but great detail, when normal in the genre, and in most video games, is that the enemy sprites disappear after their death so as not to consume resources? Fighting alongside the petrified bodies of our former rivals is one of many. 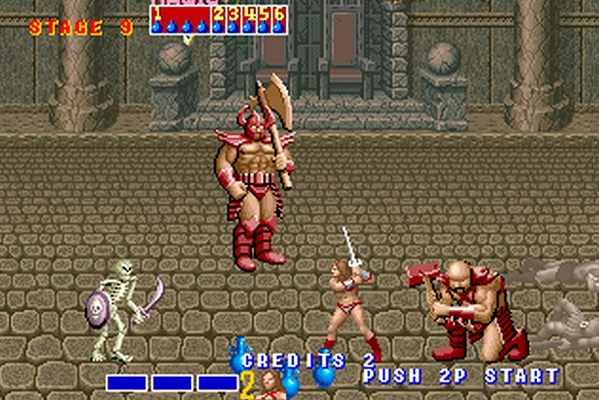 ¿Than? ¿More details yet? Come on, the interludes between phases, where dwarfs with their sacks took revenge for our blows and looting, and stole two potions from us - if we had them, of course - and we had few seconds to recover them, and if we were skilled, get some more, But our attention was also focused on their colleagues in green clothing, because they offer food to recover our lives a little, since we do not recover resistance between phases as the times used to. Here you have to earn your lentils, friends! Or the pieces of meat, rather.

¿And what to say has that detail of not having a timer? But, of course, if you stayed a lot in an area without advancing, two precious harmful and dangerous black skeletons appeared to martyre you, because you could continue advancing through the phases, you could even defeat them, but they put some arreones of the fifteen Ah! And give yourself life by advancing further, because after a while two more appear, and if you continue to pass the time another pair of bone-black twins join their companions.

¿Still more? Many of the enemies' names are Alcoholic Drinks! Except for the «Bad Brothers» with their hammers that….Reference to the Hammer Bros of the Super Mario games? Or that digitized voice samples are taken from the Rambo and Conan movies. Yes, those ‘aaaaaaaaagggggg’ when clapping the enemies come out of there. STOP THE WORLD I DOWNLOAD HERE! 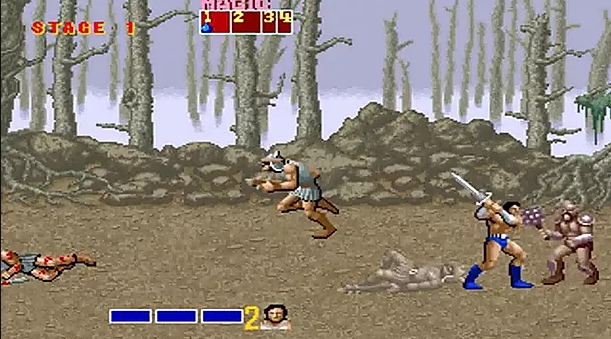 Be careless, be tribute, the last paragraph is again dedicated to the unrepeatable music of the game, a masterpiece of Tohru Nakabayashi, well, without hesitation. Because it is absolutely impossible that anyone who has approached this game, be it in arcade, be it in domestic version, would not be touched by its enormous taste and quality in the melodies, from the character selection screen, its first phase with that tone sad and epic at the same time, that music of the bosses, which in the final phase becomes the music of the level, being able to hear it in all its great splendor, its melancholic and evocative touches, the gloom and solemnity of the final confrontation, and the Very funny melody of the cheeky and unforgettable final sequence, straight to the Top 10 of all-time arcade finals. We did not expect less from the man who gave us the music from the Moonwalker arcade, ¿right? 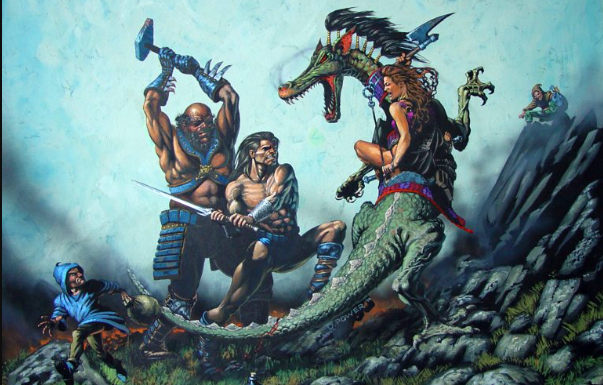 OH, BUT THAT'S ANOTHER STORY………