A few days ago I got this sexy little fella: 2.50 Escudos issued by Portugal in 1946. I didn't know much about Portuguese history, turns out it was a really "interesting" time back then!

The Estado Novo ("New State") was the corporatist Portuguese state installed in 1933. The Estado Novo was one of the longest-surviving authoritarian regimes in Europe in the 20th century. Opposed to communism, socialism, syndicalism, anarchism, liberalism and anti-colonialism,the regime was conservative, corporatist, and nationalist in nature, defending Portugal's traditional Catholicism. source and more info

This is my second silver Portuguese coin from that era, the other one is a 5 escudos I got some months. It looks exactly the same, only bigger: Size comparison vs a euro coin: The sexy ships depicted on the front is a caravel.

The caravel is a small maneuverable sailing ship used in the 15th century by the Portuguese to explore along the West African coast and into the Atlantic Ocean. The lateen sails gave it speed and the capacity for sailing windward (beating). Caravels were used by the Portuguese and Castilians for the oceanic exploration voyages during the 15th and 16th centuries, during the Age of Discovery. source and more info

Two famous such ships are Nina and Pinta, used by Christopher Columbus in his first transatlantic voyage in 1492. the other one was Santa Maria which was a carrack

Feel free to click the links above for some interesting shipping history :)

I have seen that ship before... First thing came in mind after seeing it is "Black Pearl" and Pirates of Caribbean.

Looks much older, pretty cool ones!

Lovely and sexy coin to appreciate.

Sadly, after she was run aground the Santa Maria became the building materials for the ill-fated Fort Navidad and the men left behind. Give Columbus credit for trying to establish a trading relations and subsequent claim on behalf of the crown. However, the Relations part didn't go so well.

The coin is pretty much messed up, but good thing is that it still carries some remnants of J. DA Silva (the engraver) and some parts of FRAGOSO GR. below the currents line.

Maybe the coin has lost some of the silver content and original weight might differ from the mint condition coins.

Anyway, having a unique thing is already a job well done. 😃

I don't mind my coins a bit rough! And I am not willing to pay crazy $$ just to have em in excellent condition. Owning a piece of history and the silver they carry is enough for me 🤣

😂 dude what my last line said to you is epic. No kidding 😄
!LOLZ

The coins are so nice. Ships are a great design !

We both have the ship coins! Yay!!! 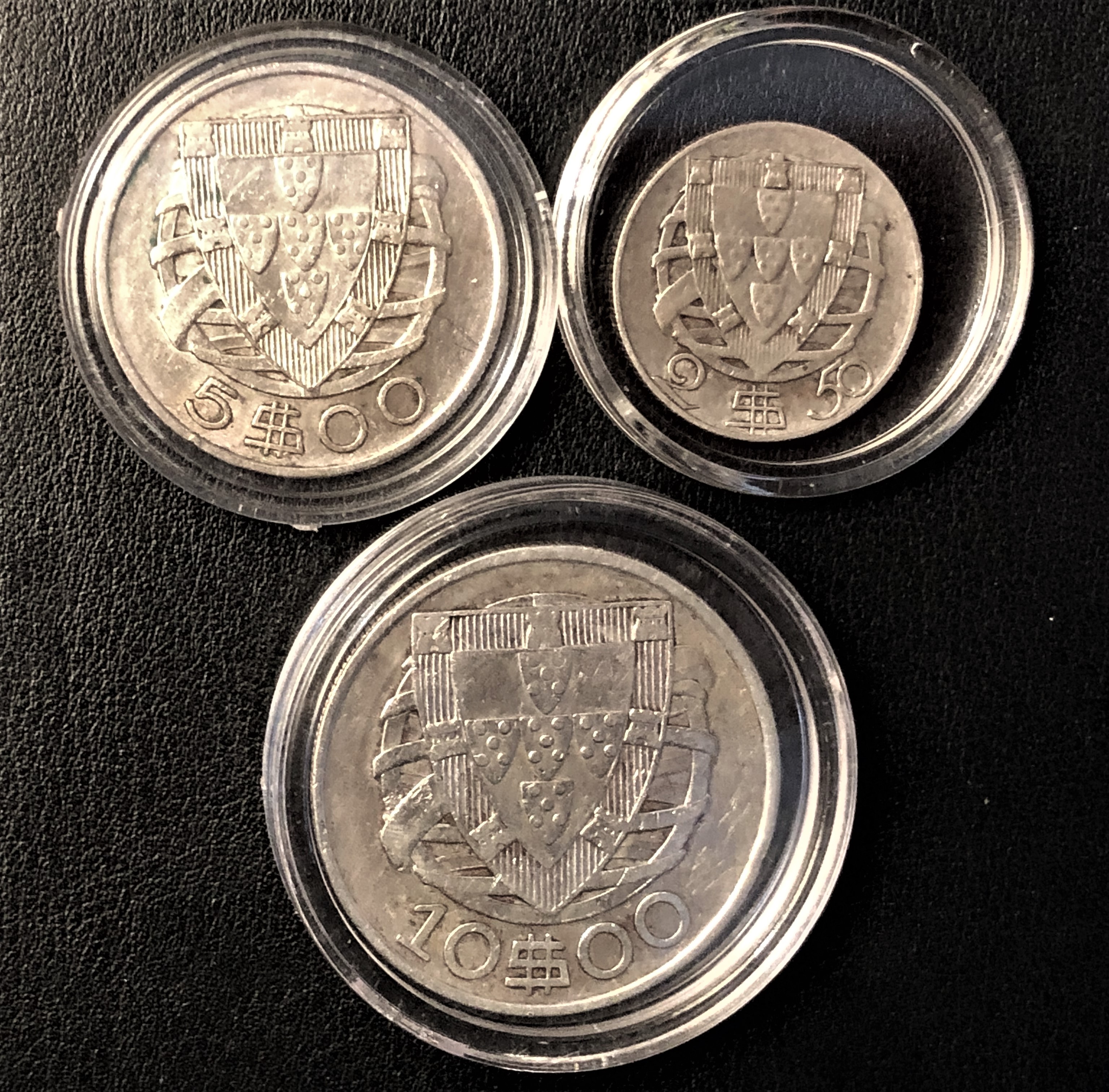 I have to hunt them down. You don't see these ones here either! Let's find them more of them--- you on your side of the world, and me on mine @trumpman !

I’m a huge fan of ship coins and rounds. Great pick up. The history is very thick from Portugal

I love the ship design on the coin very beautiful and sexy.

Damn you got the bigger one too nice , thanks to you I identified mine yours is beat up but mine is in way worse shape, still looks cool I find

Just learned there's an even bigger one, 10 escudos. Now I have to find one too and own all three!

True! But imo the roughness adds to the beaty!

That actually looks quite so sexy

Great coin...
A quick hack to get coins though is buying vending machines, ever thought of that😁.

Just walk into any shop and say you'll take their vending machine as it is...
Treasure box 😂

A coin with a bit of history. I don't think I have ever heard of a caravel before.

I think the Portuguese ship coins are one of the best designs out there.

when you'll get rich enough you should mint your own limited series of silver gay coins with tons of penises and other good stuff on them :)))

when I get my mental health back after moving house ... aka soon :P

The 2.50 Escudos doesn't look bad considering it was created in an era when scientific knowledge was far less advanced than it is today.

I believe that is one more reason why you referred to it as "sexy caravels."😄😄 and they are looking sexy.

I like your discoveries; you're doing a great job here, and I like the fact that your content is unique.
Thank you for sharing knowledge, you are amazing

Two famous such ships are Nina and Pinta, used by Christopher Columbus in his first transatlantic voyage in 1492. the other one was Santa Maria which was a carrack

in venezuela when we are in the school they always teach us those names "Nina, pinta and the santa maria"

imagine my surprise when i read that those are the ships in your coin jajaja it was crazy... nice ones! definitely those are ones that i would like to have too!