In my last silver post we learned about the Caravel, a small type of maneuverable sailing ship the Portuguese used to explore the world and discovered the Americas.

Today we have another type of ship... The ship depicted in my collection of silver 10 cents from Canada is a schooner. What a silly word 😅🤣

A type of sailing vessel defined by its rig: fore-and-aft rigged on all of two or more masts and, in the case of a two-masted schooner, the foremast generally being shorter than the mainmast. source and more info

But it's not just a random schooner but a famous Canadian ship called the Blue Nose.

Bluenose was a fishing and racing gaff rig schooner built in 1921 in Lunenburg, Nova Scotia, Canada. A celebrated racing ship and fishing vessel, Bluenose under the command of Angus Walters, became a provincial icon for Nova Scotia and an important Canadian symbol in the 1930s, serving as a working vessel until she was wrecked in 1946. Nicknamed the "Queen of the North Atlantic", she was later commemorated by a replica, Bluenose II, built in 1963. source and more info

As for my coins, they are from the following dates:

The ones minted in 1968 (and 1969) were the last to be made of silver and in the same dates there were also non-silver ones minted, by nickel.

Here are is how they look from the other side: Notice how the older ones feature George VI, remember Elizabeth became queen in 1952 after the death of her father King George VI. In 1939 she was only reaching adulthood.. Ok, enough history for today! More sexy ships in the next silver post 🚢⚓🚢

So did they actually change the portrait by reminting the coin as the queen came of age back then?

Well the switch from George to Eli happened when George died and Eli became thenew queen of you mean that!

Those are not so great as the pinta and the nina but they are still good for collection! at this point i think you might a have a bag full of coins

These coins make me study history. It was one of the fastest schooners. 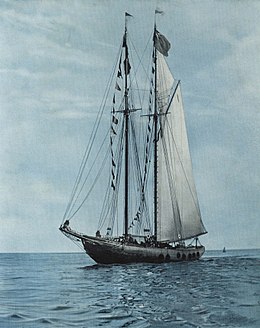 I liked these Ships coins More... Looks so Good for your collection and well, hopefully Portuguese will be happy after their Match which is ongoing RN in present time.

I would bang em all!

Well, I like these educational types of posts sir Trumpman! I'll take sexy ships all day instead of the old dudes 😂😂
!PIZZA

The coin really looks nice with a lot of talking points and history about it.

I've always had an interest in ancient coins. I watch the videos of the treasure hunters just for this reason. thanks for sharing interesting coins

I wouldn't call them ancient😅

would have named it Brown Nose for the shits and giggles :P

The coin is so nice. Design of ships are worthwhile !

A beautiful coin from 1968. I usually follow the videos of the treasure hunters. That's why, when I saw the coins from the pictures, I wanted to go to your friend and examine them. thank you for sharing

I think the deceased hag is pretty dominant on coins due to her vast kingdom and 70 years on the throne. Charles might not get that fancy coins due to his repu and he is almost quite old for a throne.

Coins with Bluenose rig are still minted in Canada, many of them are available in colors, but those are quite expensive at the moment.

I hope you'll conquer the collection of @kerrislravenhill by adding more imperial ships to your collection. !LOLZ


The first time I saw my future Wife was at the local Zoo.
I just knew she was a keeper.
Credit: reddit
@trumpman, I sent you an $LOLZ on behalf of @emaxisonline

I'd be impressed if he could match just my Bluenose collection.

@trumpman likes challenges and he would in his dreams. !LOLZ


I don't want my wife any longer.
Her height is perfect.
Credit: reddit
@kerrislravenhill, I sent you an $LOLZ on behalf of @emaxisonline

Maybe one day. In my dreams! There are lots of non-silver 1968 !0 Cents minted too, a quick test I used is an ordinary magnet to distinguish them. I lost count on how many silver Canadian 10 Cents I have. ⛵

Can you fill a bathtub with your silver yet?

I haven't tried the tub thing but I have more than I can possibly lift proving that a thief with a 500 oz. monster box can't possibly run faster than a person chasing after him with a Katana.

I wish I had one that old :p

Those are pretty nice eh. oh yeah I remember when Elizabeth became queen in 1952 🤣 also word on the street is that Santa got some Canadian coins coming your way

It's supposed to be a secret silly !

Still a secret, you can't be sure who or what just that it's Canadian coins 🙂

Real Silver Money! Get it while you still can. Thanks again, @trumpman.

It's nice to see them change the image of Elizabeth over time as she grew older.

I am starting to like silver. It seems more substantial then shitcoins.

Question: So the Nina, the Pinta and the Santa Maria were all Caravel?
Small maneuverable ships..

Seems like you must have a huge collection by now :)

Those are beautiful ships, no matter the name. Where did you find the coins?

LOL!
I wrote two comments, but forgot to upvote this post.
But I have corrected my error!
😂🤣
It seems that these Silver Coins are the only thing getting old! Such nice dudes and ladies!

The winner of old dude island likes it too!

This is not a shitpost, didn't read.
I do like Canada and those are nice dimes.
!PIMP

@thepimpdistrict 53
2 months ago
You must be killin' it out here!
@summertooth just slapped you with 1.000 PIMP, @trumpman.
You earned 1.000 PIMP for the strong hand.
They're getting a workout and slapped 1/1 possible people today.